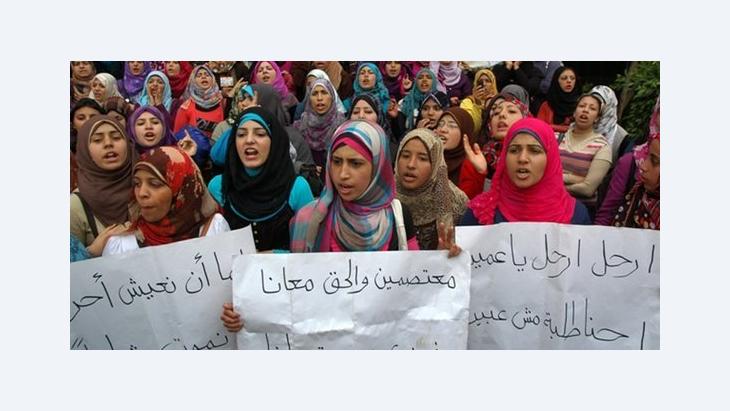 Egyptian Students and the Arab Spring
''We All Yearned for Democracy''

﻿Activists involved in the "January 25 Revolution" against the Mubarak regime included many students who took to the streets demanding freedom and social justice. But what is left of that revolutionary spirit now? Fabian Schmidmeier went to Cairo's Ain Shams University to find out

﻿At Ain Shams University in Cairo, students are only too happy to talk about the events that have changed the face of the Arab world forever. They reflect with pride on the Arab Spring, which has had a lasting effect on student life in Egypt.

Just two years ago, the mood on campus was quite different. At the time, the regime was still at pains to maintain the apolitical nature of the institution, thereby preventing the formation of an opposition movement. "The system in place back then banned any political activity at the university," says Mohamed Mansour.

A student at the university's language faculty, he is grim-faced as he recalls the past: "We were too afraid to speak openly. The regime's spies could have been lurking anywhere," he says.

The state had even set up a functioning network of informers among the young students themselves. These informers would denounce fellow students expressing any criticism of the ruler and his policies. 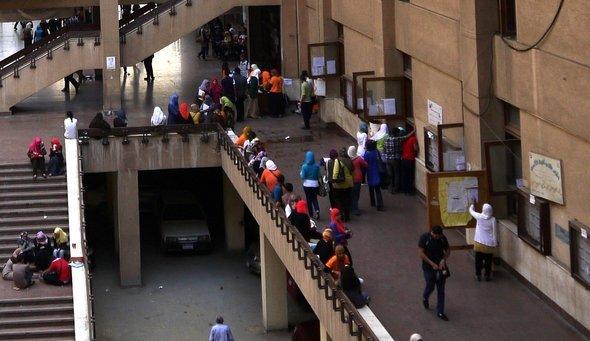 A break with the past: Here at Ain Shams and many other universities, the post-Mubarak era has seen the formation of political groups able to canvass students in a new climate of freedom

​​"They tried to nip any form of protest in the bud immediately," says Mohamed.

It was also quite common for police officers to visit the families of students who were critical of the regime, as way of intimidating them. Although Mubarak often claimed to be a "protector against Israel and Iran" and a "supporter of Palestine", his government found little favour with the majority of students. "Most supported the revolution. We wanted to be free at last, free to form our own opinions and have our say," says Mohamed Mansour.

In the end, Mubarak was forced to yield to popular pressure and officially resigned his posts on 11 February 2011. Work to found new parties began immediately. An unprecedented dynamic took hold – universities were no exception, and a variety of political movements began to take shape here too.

Mohamed Mansour, a student of English and German, decided to become politically active after the end of the dictatorship. Together with a group of like-minded individuals, he founded a campus group named the "Hadota Masrya Family". "We named the group after a song by the famous Egyptian musician Muhammad Munir, which advocates freedom and justice," he says.

In the wake of the revolution, student protests forced the resignation of former University President Maged el-Deeb, who served under the Mubarak regime. 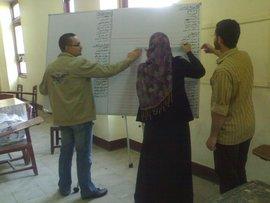 ​​As his direct successor had been killed in a car accident, on 3 June 2012 the university elected Hussein Essa from the faculty of medicine to the post. For the first time in history, students were able to vote in a free and secret ballot – without the constraints of Mubarak's one-party system. At last, the impact of the revolution was being felt on the university campus.

Now, new elections to choose student representatives are to be held by mid-December at the latest. One of the organisers of both the previous and the upcoming poll is Moataz Mohamed, a senior assistant working in the German department at Ain Shams University. "Before the revolution, there were no real elections. Officials loyal to the regime nominated four or five students, and administrators at each faculty were forced to choose one of these students to head the student association," says Moataz, explaining the conventional practices of the Mubarak era.

It was certainly the case that depoliticised university life was under the complete control of state authorities. "We all yearned for democracy," explains Moataz. A smile spreads across his face and he cannot conceal the joy he feels at these historic achievements. Indeed, at the current time and at this university, the winds of change are making themselves felt.

Faculty offices have already started setting up committees responsible for organising and monitoring polls scheduled for December to elect the student association. Up-to-the-minute information is made available to students via a Facebook page and posters, enabling each of the candidates to set out their campaign manifestos. Owing to the large number of students here, the election process is expected to last 10 days. 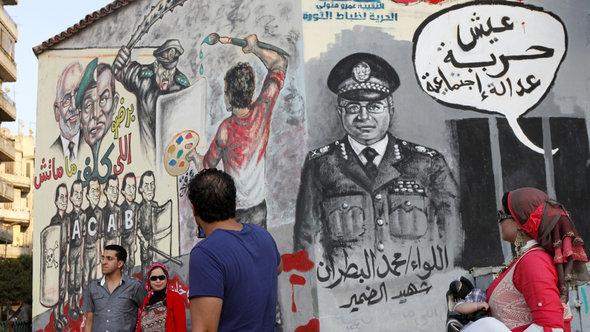 "Bread, freedom, social justice": Many student activists took part in the anti-Mubarak protests, despite a strict ban on demonstrations and political activities both on and off campus

​​Mohamed Mansour of the "Hadota Masrya Family" campus group points to the variety of student groups vying for candidacy at each faculty. He says his group doesn't have an explicit political programme. While its primary goal is to improve conditions at universities and support students in their demands on the state and military for freedom and a constitution that reflects the interests of the people, there are also groups representing parliamentary parties.

The Muslim Brotherhood on campus

"The Muslim Brothers are also trying to play a part in this," notes Mansour. In his view, the crucial point here is that the university groups aligned with the Brotherhood have access to larger financial resources than the smaller organisations who can only rely on cash from their members. The Muslim Brothers plan to enter the upcoming university election race under the name "Shabab al-Tahrir" (Liberation Youth).

Others take a more measured view of the achievements of the 25 January Revolution, for example Abdo Nasser, a blogger and student of linguistics. "We may have succeeded in bringing the revolution to the universities, but I'm nowhere near satisfied," he says. Of course, in contrast to the Mubarak era there is much greater media freedom and freedom of expression now, says Nasser, but he underlines the fact that numerous Mubarak-era laws are still in force, and these are sabotaging progress. In his view, Egypt still has a long way to go.

More than 40 percent of Egyptians can't read or write, there is a huge housing shortage and the debates taking place among politicians – debates which are, in Nasser's view, often polemical – rarely attain a meaningful result. "What bothers me most are the people who blame the revolution for the current chaos," says Nasser. Nothing's going to change overnight, that's obvious, and that's why patience is the order of the day, he says. What is Nasser's greatest wish? "That Egypt becomes a new country."

Home
Print
Newsletter
More on this topic
Interview with the Muslim activist Asmaa Mahfouz'': There is no war between Islam and America''Interview with Ahdaf Soueif: Happy to Follow the Tahrir Youth's LeadDossier: Uprising in the Arab World
Related Topics
All Topics
Date:
Mail:
Send via mail

END_OF_DOCUMENT_TOKEN_TO_BE_REPLACED
Social media
and networks
Subscribe to our
newsletter