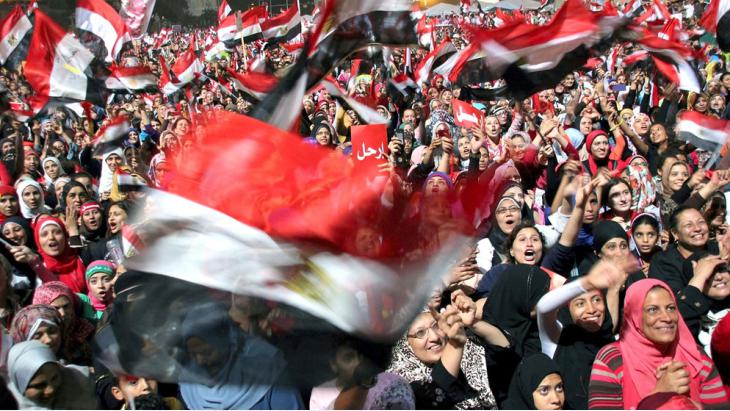 Egyptian video archive 858.ma
Nothing but the truth

The battle for images and symbols rages on: seven years after the start of the Egyptian revolution, the media collective Mosireen is trying to challenge the official state narrative with a wealth of citizen video material. By Christopher Resch

It takes only a few clicks and the viewer is watching footage shot right in the middle of a demonstration outside Cairo's imposing television and radio building. Suddenly shots ring out; screams can be heard; the camera shakes; sirens wail in the distance. Just a few more clicks and the scene changes to a morgue, where the mother of a dead boy tells the camera of her sorrows.

Just a few days before the seventh anniversary of the start of the Egyptian Revolution, activists have opened up an online video archive at https://858.ma/. The archive comprises a total of 858 hours of film material – almost 36 days – and the intention is to keep on adding footage. Most of the videos date from 2011 and 2012. The subject matter ranges from interviews to footage of state repression and demonstrations against the government. Anyone who clicks through the material in the archive will find themselves in a reality that the Egyptian government would like to obliterate forever.

The archive was set up by Mosireen, a loose collective of media activists. In mid-2011, they collected videos of the revolt and showed them in what became known as 'Tahrir Cinema' on Tahrir Square in the centre of Cairo.

The full brutality of the regime

During the 18-day revolt that swept away long-term president Hosni Mubarak in February 2011, many of the people who would go on to join Mosireen collected video clips and supplied them to independent Egyptian and international media. All the while, Egyptian state television reported that everything was peaceful. "We needed proof; images of the killings, of the tortured bodies in morgues, of the full brutality of the regime," explains an activist from the 858.ma team.

Understandably, she would rather remain anonymous: the struggle to determine who gets to say what really happened is still in full swing; the state, however, has more means at its disposal. For the state, the revolt meant chaos and a threat to domestic security. Indeed, 3 July 2013 was by far the bigger revolution: on this day, the military deposed the unpopular but democratically elected president, Mohammed Morsi. He had completely misinterpreted his democratic mandate and tried to bring the country into line with the ideas of the Muslim Brotherhood.

The strong man in the state was – and still is – the then commander-in-chief of the Egyptian armed forces and current president, Abdul Fattah al-Sisi. He exploited the growing polarisation within the country to present the military as the only reliable source of law and order in Egypt. This made it possible for him to silence not only the Muslim Brotherhood, which had been a thorn in the side of the powers-that-be for decades, but also any critics who said anything that deviated from the official line.

In this respect, the government introduced a widely criticised law on protests and demonstrations that imposed draconian penalties on anyone organising spontaneous demonstrations. The most recent video uploaded to 858.ma shows a demonstration against this very law.

The use and abuse of images

It isn't just the members of Mosireen who view the revolts as the start of one of the biggest upheavals in modern Arab history. "It is the most important thing to happen in our lives," says the 858 activist. "But the regime is manipulating the images, changing their meaning. That′s why it is our duty to fight for the narrative and to play an active role in writing history." She explains that the decision was made to leave it up to users to decide what they want to do with the archive material. The videos are raw, uncut and have timestamps, which means they are easy to process.

It took hundreds of activists several years to collect, watch, sort and index the material before uploading it to the open-source platform. Perhaps it is no surprise that Mosireen has returned to the fray after a period of relative silence with a project of such indirect power as this. After all, in view of increasing state repression, the collective's room to manoeuvre has been shrinking. 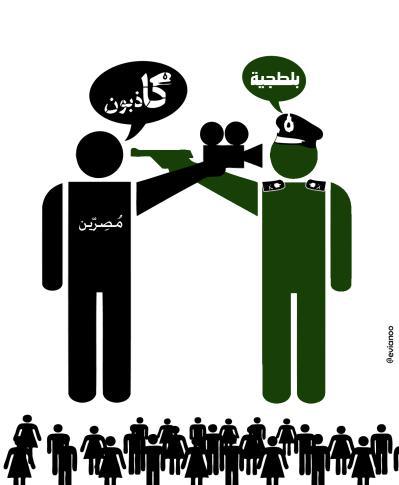 Chronicling the revolution and the role of the military: "for the 858.ma activists, it is not about telling the one true narrative of the revolution. That would be arrogant. Instead, the archive is a means to an end, a way of countering the truth peddled by the government," writes Christoph Resch

"After the Rabaa massacre in 2013, we experienced an artistic block. We were kind of lost," says the activist. At the time, a huge protest camp set up by the Muslim Brotherhood on Rabaa al-Adawiya Square in Cairo after Morsi was ousted by the military was brutally cleared. About 1,000 people lost their lives. It goes without saying that a war is being waged about the accuracy of this figure too. She adds: "The regime began actively using our images and videos to their ends. We needed time to find our voice again."

Mosireen sought other forms of expression: "Out on the street", a film by Philip Rizk and Jasmina Metwaly, highlights injustice, police arbitrariness and corruption – all factors that led to the rebellion in 2011. The novel "The City always wins" by Omar Robert Hamilton, who is also part of Mosireen, describes in detail and in a breathless manner how members of the fictitious collective "Chaos" work for their cause during the revolution.

For the 858.ma activists, it is not about telling the one true narrative of the revolution. That would be arrogant. Instead, the archive is a means to an end, a way of countering the truth peddled by the government. That being said, the Mosireen activist is sure of one thing: "When I look at all the videos, the narrative is stronger than any attempts at manipulation."

Alaa Abdel-Fattah: an icon of the resistance

In the battle to determine who writes history, symbols are always one of the weapons of choice. One such a symbol is Alaa Abdel-Fattah, member of one of the most important dissident families in the country. For supporters of the revolution, he is an inspiration, an "uncontrollable free spirit", as the anonymous Mosireen activist calls him. For the state, that it exactly what makes him so dangerous, which is why it put him behind bars for so long. The message is: while his prominence may have protected him in the past, a colder wind is now blowing.

Alaa Abdel-Fattah also plays a role in the over 1,600 videos in the 858.ma archive. There is the question as to how the government will deal with such a wealth of material. It will not be easy to use the videos to prove any specific human rights violations. It is possible that the government will just brazen it out. The fight for images and symbols continues; even in the eighth year of the Egyptian revolution.

Welcome to the world of Al Qasar, where Arabic music collides head-on with punk and psychedelic to create something powerful and beautiful. "Who Are We" is a raucous, subversive ... END_OF_DOCUMENT_TOKEN_TO_BE_REPLACED

Egyptian authorities have Mada Masr in their sights once again after critical reporting. But the editor of the country's last independent news source is adamant they will continue ... END_OF_DOCUMENT_TOKEN_TO_BE_REPLACED

Like Christianity, Europe's history is one of migration. Both have strong roots in the Orient and in cultures thousands of years old. Cultural historian Bernhard Braun invites us ... END_OF_DOCUMENT_TOKEN_TO_BE_REPLACED

When she ascended the throne, millions of Muslims still lived under British rule. Later, Elizabeth II appealed for tolerance in a multi-religious society. She was the first ... END_OF_DOCUMENT_TOKEN_TO_BE_REPLACED

END_OF_DOCUMENT_TOKEN_TO_BE_REPLACED
Social media
and networks
Subscribe to our
newsletter