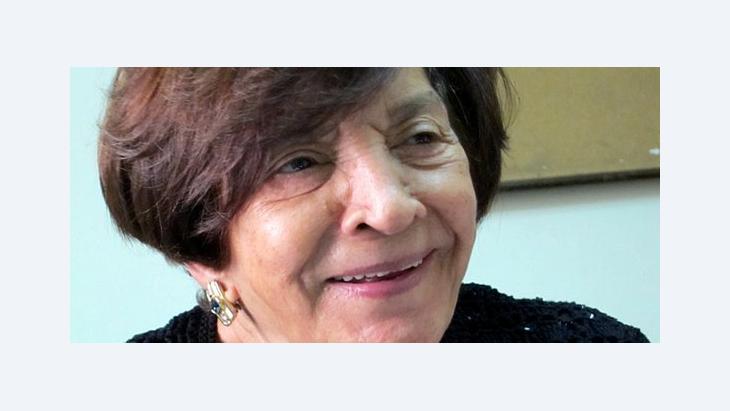 Women as Losers of the Revolution?

Egypt's most prominent women's rights activist Hoda Badran fears a regression in the battle for social and political equality for women. With the newly-founded "Egyptian Feminist Union", she aims to bring the concerns of women to a wider public. Claudia Mende introduces her

Hoda Badran fears that the Egyptian women's movement is being crushed between two ideologies that have little sympathy for the rights of women. The 58-year-old sociologist and leader of the "Arab Alliance for women" says she believes that both the Islamists and the military have a stranglehold on the work of women's activists.

The parliament is dominated by Muslim Brothers and Salafists and in the form of Mohammed Mursi, the Muslim Brotherhood candidate has a good chance of becoming Egypt's first democratically elected president in the run-off. On the other hand there is the military, currently still in power, with their patriarchal masculinity cult based on values such as strength and bravery.

The second candidate in the run-off, ex Air Forces General Ahmed Shafik, is a product of this military background. Between them are women such as Hoda Badran, forced to look on in disbelief as their already negligible influence in Egyptian politics is further eroded. 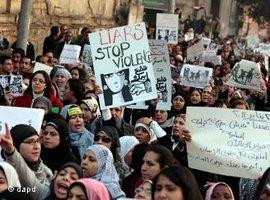 Battle against male violence and for more participation: Women's activists demonstrate during the rebellion against Mubarak in Cairo

​​Hoda Badran is the best-known representative of the women's movement. As chairwoman of the "Arab Alliance for Women", she is well connected across the MENA region. During Mubarak's rule, she also represented Egypt on official international boards such as the UN Convention on the Rights of the Child.

No place for women on political committees

"There is no place for women in the institutions governing the transformation," says Hoda Badran. The military council has abolished the parliamentary quota for women. Under Mubarak, 20 percent of seats were reserved for female deputies. Now there are only six women represented on the national parliament, which amounts to just 2 percent of all parliamentarians.

The only woman who aimed to stand for the post of president, the journalist Bouthaina Kamel, did not manage to gather the necessary number of signatures to support her candidacy. "Women have to mutually support each other and demand their rights," says Badran. Otherwise, she sees a bleak future for the Egyptian women's movement.

But Badran and her colleagues are making every effort to secure broad support for their work among the general public. Their work has even encountered resistance from the well-educated, mostly young activists driving the protest movement. These people often expound the view that this is not the time for women's rights, and that the focus should be on democracy. If the transition to democracy is successful, they say, the situation of women will improve. 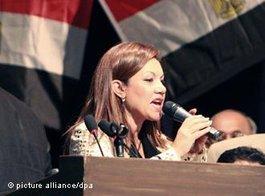 The journalist Bouthaina Kamel makes grave allegations against the Egyptian military council. She does not believe that the Supreme Council of the Armed Forces intends to withdraw from politics

​​Badran says this is a misconception that many women have fallen victim to in the past. "This won't happen automatically," she says with certainty. "We have to win our rights." She knows what she is talking about. Badran herself was married off by her family to an older man and went through an arduous battle to win her independence.

The others, the illiterate women – some 50 percent of Egyptian women cannot read or write – are occupied with the daily survival of themselves and their families. It does not even occur to women who work the land for 12 to 15 hours a day to formulate their own needs and wishes.

Ignorance and a lack of education

Whenever the Muslim Brothers say they want to create jobs for men so that women can stay at home and be taken care of, then this is well-received by these uneducated women who often have to earn money and take care of the family in tandem. "And in any case, they don't believe they have equal rights," says Badran.

A lack of education also results in misinterpretations of Islam. "They can't read themselves," says Badran, "and allow the Islamists to convince them of all kinds of things." The women believe that they are of secondary importance to their menfolk. And they also swallow the Islamists' propaganda that if they don't vote for a religious party, they'll end up in hell. 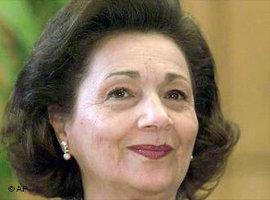 Guilty by association: The fact that the dictator's wife Suzanne Mubarak was involved in the women's rights arena is now having a detrimental effect on the activists' cause

​​Now that Egyptian society is struggling to work out a new model for the future, the fact that the dictator's wife Suzanne Mubarak was involved in the women's rights arena is now having a detrimental effect on the activists' cause.

For example, the former First Lady pushed through a modern divorce law past parliament and against the resistance of the conservatives. From the year 2000, the new family legislation made it easier for women to get a divorce. The bill was even compatible with Islamic law. But it nevertheless met with resistance from Islamic circles at the time.

In her view, a shared female strategy against the dominance of men in politics does not work. "We've tried to forge an alliance with them, but it failed," she says. "Women within the Muslim Brotherhood see themselves as more obliged to represent the interests of their party rather than those of female voters."

The Muslim Brotherhood portrays itself as moderate, with apparently no intention of meddling with existing women's rights, and no plans to introduce an Islamic dress code. But Badran's pessimistic prognosis is that once power has finally been handed over to them, they'll quickly take off the liberal mask. 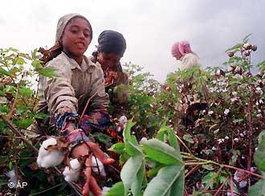 Poverty and poor education: It is still the case that some 50 percent of Egyptian women are illiterate and occupied with the daily survival of themselves and their families

​​This is why in November 2011, Badran initiated the foundation of a new alliance of women's organizations and NGOs, the "Egyptian Feminist Union". It is a revival of the eponymous organization founded by Hoda Sharawi in 1923, banned under Nasser. The organization has some 3,000 institutional members, all of which want to join forces to bring women's voices to a larger public, so that their concerns are not totally drowned out during Egypt's transformation.

"We want a voice in all important social and political questions," demands Badran. There are plenty of issues at stake. More rights for women employed in the informal sector, better maintenance provisions, the further liberalization of divorce, a ban on polygamy and a stronger position for women in the judicial system.

Some women might already be regretting giving the Islamists their vote. It won't be long before they realize that the Islamists' image of the apparently intact family is totally unrealistic. The man as sole breadwinner, the woman as homemaker – like many other places, this is no longer a reality in Egypt. 25 percent of households are managed by women, an estimated two million children work, the girls as domestic staff, the boys in workshops. Worsening economic conditions have resulted in the break-up of families, and the elderly can no longer be provided for.

Hoda Badran hopes that her sisters will soon wake up. This hope is fuelled by recent experiences. In a popular district of Cairo she watched as incensed tradeswomen pelted members of the Muslim Brotherhood with shoes as they visited the area as part of the election campaign. The reason: The Islamists had advocated that women should give up their work and just stay at home.

Home
Print
Newsletter
More on this topic
Interview with Bouthaina Kamel: ''The Revolution Is Not Over as Long as the Military Rules''Women's Rights in Egypt: A Second Revolt for Sheherazade's DaughtersQantara Dossier: Feminist Approaches to Islam
Related Topics
Arab Spring, Arabellion, Democracy and civil society, Egypt Revolution 2011, Muslim women, Women in the Islamic world
All Topics

Napoleon Bonaparte’s 1798 invasion of Egypt represented the first modern attempt to incorporate an Islamic society into the European fold. Although the expedition was a military ... END_OF_DOCUMENT_TOKEN_TO_BE_REPLACED

The outpouring of solidarity worldwide following the violent death of George Floyd should prompt us to step back and fundamentally question racist structures and privileges based ... END_OF_DOCUMENT_TOKEN_TO_BE_REPLACED

Has it ever crossed your mind that you are eating plastic on a daily basis? That you are drinking it? Apart from the thousands of trending pictures and videos on social media of ... END_OF_DOCUMENT_TOKEN_TO_BE_REPLACED

Libya's plight resembles that of other war-torn countries in the Greater Middle East: internal conflict has spiralled out of control because of misguided foreign intervention. ... END_OF_DOCUMENT_TOKEN_TO_BE_REPLACED

The Arab world suffers from a system in which people are intolerant of "the other". This racist environment contributes to the growth of hostility and antagonism towards anyone ... END_OF_DOCUMENT_TOKEN_TO_BE_REPLACED
Author:
Claudia Mende
Date:
Mail:
Send via mail

END_OF_DOCUMENT_TOKEN_TO_BE_REPLACED
Social media
and networks
Subscribe to our
newsletter