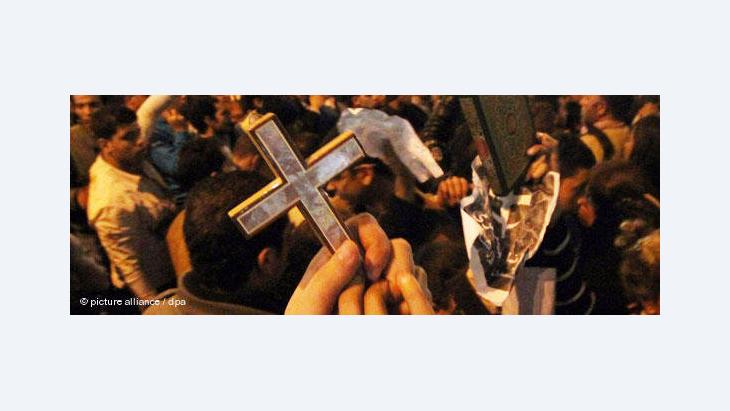 ﻿Egypt's Coptic Christian minority has long claimed it suffers discrimination in the Muslim-majority country. Many had hoped that would change in the wake of the revolution, but many fear a return of the old ways. Magdalena Suerbaum reports

A thick layer of soot has made the cross carved on the wall of the destroyed building hardly recognizable. But the cross is the only thing that indicates that this burned out ruin in the town of Sol was once a church.

Today, bricklayers, painters and soldiers are all busy at work on the three-story structure, reconstructing the building that housed two prayer rooms and a Sunday school before an angry mob attacked it and set it on fire.

The incident was not an isolated one, nor a new development, according to Youssef Sidhom, editor-in-chief of the one Coptic newspaper in Egypt. 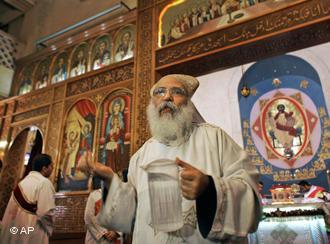 Coptic priest throws holy water over worshippers during the morning mass inside the Saints Church in Alexandria, Egypt, Sunday, 2 January 2011. Grieving Christians, many clad in black, were back praying in the blood-spattered church where 21 worshippers were killed in a suicide bombing that same week

"Over the last few decades, Copts have consistently been targets of discrimination and attacks," he told Deutsche Welle, but the community had hoped that Egypt's revolution that toppled the authoritarian regime of Hosni Mubarak would change things for the religious minority. It has not, many Egyptian Christians say. "We didn't expect things to simply go on after the Egyptian revolution like they had before," Sidhom said.

The church burning was sparked by a romance that ended in tragedy – an illicit relationship between a young Christian man and a Muslim girl.

Mahmud, a young Muslim man who was sitting with friends not far from the ruins of the church, told Deutsche Welle that the Christian had raped the girl and then run away. Muslims burned the church down out of anger over the man's escape and the girl was later murdered by her brother and her cousin, a so-called honour killing. "That's our tradition," Mahmud said, saying a relationship between a Muslim and a Christian outside of marriage is the one of the worst things imaginable.

Egypt's Christians make up an estimated 10 percent of the country's 80-million population. Often the word Coptic is used to refer to this community as a whole. Although in a narrower sense, the Coptic Orthodox Church refers to the biggest of Egypt's Christian churches.

Copts believe their church dates back to 50 BC, when the apostle Mark is said to have visited Egypt. While the early church suffered under the Roman Empire, intermittent persecutions continued after Egypt became a Muslim country.

Today's Copts claim that discrimination continues, and say they are not allowed to play the kind of role in Egyptian society that their numbers justify. Christians say they often feel like second-class citizens in their own country.

After the church burning, Egypt's supreme military council ordered that the destroyed building be rebuilt and three days after the fire, reconstruction efforts began with the help of the military and villagers. While soldiers stand guard, others plaster walls and paint.

The head of the Coptic Church in Egypt, Pope Shenouda III (right), and the Sheikh of the Al-Azhar University, Ahmed el-Tayeb, address a joint press conference after their meeting in Cairo, two days after the explosion at Saint Mark's Coptic Orthodox Cathedral in Alexandria

​​"We're at the construction site every day until midnight," said Ahmad, a lieutenant in the Egyptian army, adding that this was the first time the military had taken part in a project like this.

He said the costs for the reconstruction were being covered by the military, which hopes that those Copts driven out of Sol by the violence can return. Of the town's 50,000 residents, around 7,000 are Coptic Christians.

The military intervention in the affair began in the wake of protests that were held at Egypt's state-run television headquarters. Around 1,000 Copts demanded government help in reconstructing the church and called for an end to the rising tensions between the Coptic and Muslim communities that they claim is being actively stoked by some.

"After the revolution, racism among Egyptians has grown even stronger," said Magdy Seif, an orthodox Copt who owns a plastic processing plant in Manshiet Nasser, a shanty town on the desert outskirts of Cairo that is a centre for refuse collection. Most of the people who live and work here are Copts.

As a protest against what they see as ongoing religious discrimination, Copts from Manshiet Nasser held a demonstration in early March, blocking one of Cairo's main north-south arterial roads near the city's Citadel. Tensions escalated between the protesting Coptic refuse collectors and drivers. Soon, glass bottles and stones were flying through the air, thrown by both sides, according to Seif. 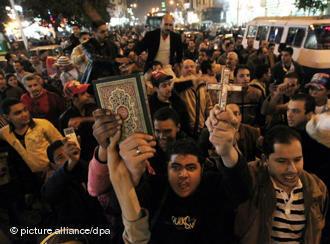 Egyptian Muslims and Christians raise the Quran and Cross in Shobra district, Cairo, Egypt, to protest against the terrorist attack on a Coptic Christian church in the northern Egyptian city of Alexandria, 1 January 2011

The conflict continued into the night before the army moved in to calm the situation, firing shots in the air in a bid to disperse the crowds. But before the conflict ended, the district was littered with wrecked cars and scarred by apartments and houses which had been burned. Thirteen people had lost their lives; at least another 110 were wounded.

In the face of the violence, many Copts are now looking back wistfully at the revolution centred around Cairo's Tahrir Square in January and February. Then, it was almost taboo to talk about one's religion, said Seif.

"We Egyptians had one common goal, to see Mubarak step down," he said. "Everything else was unimportant."

But since then, fundamentalist Muslims have began to exert pressure and show more force, according to Mamdouh Nakhla, a lawyer and head of Al-Kalema, a human rights organization based in Cairo.

"The Salafis have taken over the Egyptian street in the wake of the revolution without any interference by the police or the military," he said, referring to a stream of Sunni Islam that espouses a literalist reading of scripture and adheres to a conservative, puritan lifestyle.

He and others are worried about newly empowered fundamentalist groups, such as the Salafis, working to turn Egypt into their version of what they see as the ideal Islamic state. A leading Salafi sheikh, Mohammed Hussein Yaqoub, described the recent constitutional referendum as a religious conquest at the ballet box. Those who disagreed with the results, he said, could leave the country.

For Nakhla, the Egyptian revolution was an ideal time for the Copts. There were no deaths, attacks on churches or harassment by the Muslim majority. But just two weeks ago, two Coptic women were sprayed with a caustic liquid because they were not wearing headscarves.

Nakhla believes that bringing down the old secular regime was the first goal of Egypt's extremists, while "after Mubarak's resignation, they are concentrating on their second goal, harassing the Copts".

Journalist Sidhom says the army is responsible for the worsening situation the Coptic community finds itself in. "The military is unconcerned with he needs of the community and has opened the way for further discrimination," he said. He hopes that the feeling of national solidarity which bound all Egyptians together in a common cause during the revolution, will win the day.

But Seif and Nakhla are sceptical about the future of their country. As in the case with many Egyptians, they want to live in a secular country where religious discrimination does not exist. But they don't see a groundswell of political activism on the horizon, said Seif.

"We Copts can't do anything about these changes besides fast and pray," he said.

In Doha, Arabs from Morocco, Tunisia, Egypt and Algeria are gathering to celebrate the first ever FIFA World Cup to be held on Arab soil. The criticism from Europe? Over the top, ... END_OF_DOCUMENT_TOKEN_TO_BE_REPLACED

November 2022 sees the Arab world firmly in the spotlight with the COP27 in Egypt and the FIFA World Cup in Qatar. Public trust in MENA governments is weak, thanks to their ... END_OF_DOCUMENT_TOKEN_TO_BE_REPLACED

Palme d’Or winner "Boy from Heaven" is a classic crossover film in which cultural elements are mixed together in haphazard and random fashion. Shady Lewis Botros bemoans the ... END_OF_DOCUMENT_TOKEN_TO_BE_REPLACED

COP27 in Sharm el-Sheikh is turning into a PR disaster for Egypt’s military regime. Instead of praise for the host, the news is full of solidarity for imprisoned activist Alaa ... END_OF_DOCUMENT_TOKEN_TO_BE_REPLACED

END_OF_DOCUMENT_TOKEN_TO_BE_REPLACED
Social media
and networks
Subscribe to our
newsletter