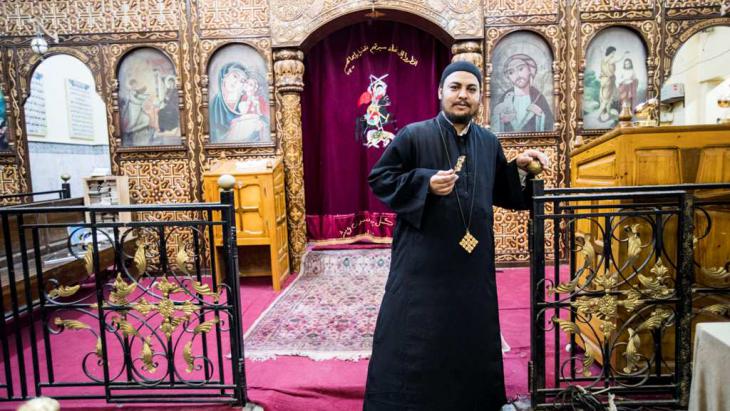 Egypt′s Coptic Church
The cost of a cornerstone

Despite a new law aimed at facilitating the construction of Christian houses of worship, the situation on the ground looks somewhat different. By Flemming Weiss-Andersen, Eva Plesner and Elisabeth Lehmann

Younan Khalaf stands in front of the shell of his house and rubs his eyes. There's still nothing but foundation walls. Iron rods are poking out at the top, the roof hasn't been put on yet. The reconstruction is taking a long time, because Khalaf keeps running out of money. The Coptic Christian is reliant on donations from the community.

Younan Khalaf lives in Kom Al Loufi, a village in southern Egypt, close to the city of Minya. His house burned down in the summer.  "One evening around 2,000 people stood in front of my house and cried 'allahu akbar' and 'the battle has begun' and such like." Then the house went up in flames. Just like those of his four brothers.

The police then detained 19 of the suspected arsonists – all of them extremist Muslims from Kom Al Loufi. They were all freed on bail. To date, a kind of arbitration process has been underway to work out who should be responsible for financing the reconstruction of the houses.

Conflicts of this kind define the daily lives of Muslims and Copts in Egypt. Some seven percent of the population are Christians; here in the south around Minya, they represent more than a third.

Hopes for improvement under President Sisi 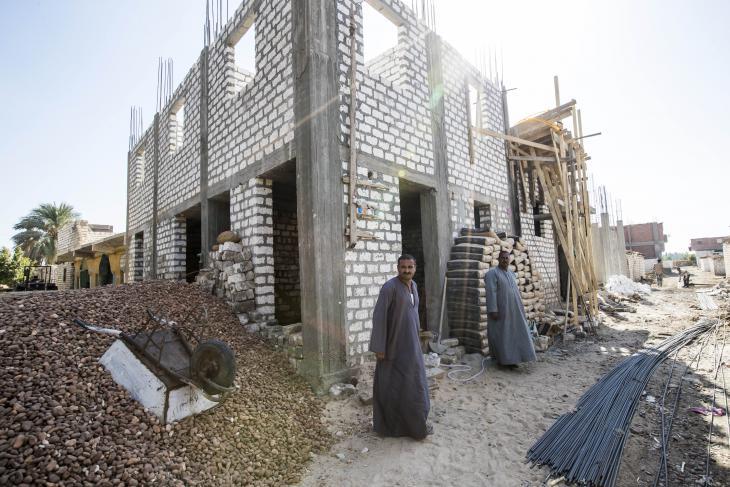 Targeted by extremists: last summer Younan Khalaf′s house was burnt down by a radical mob. Today he stands in front of the shell of his new house. Reconstruction is a slow process. It′s still not clear who is cover the cost of rebuilding. The Copts are the largest Christian community in the Middle East and make up for some 10 percent of Egypt′s ninety million population. The religious minority is frequently the target of violent attacks

Rumours had circulated that Khalaf and his brother wanted to build a church in Kom Al Loufi. This alone was enough to cause the situation to escalate. This is not a lone case. Above all during the presidency of the Muslim Brotherhood's Mohammed Morsi, Copts were regularly attacked and churches set on fire.

When Abdul Fattah al-Sisi took power, the hope was that things would improve. Sisi is also a devout Muslim. But he promised the Copts equality, upholding their constitutional status as equal citizens and in the summer, even signed off a bill aimed at facilitating church new-builds. But the reality looks somewhat different, says Bishop Makarios of Minya: "We’ve waited 160 years for this law. But so much power lies in the hands of local governors, who can reject the construction of new churches by referring to the security situation," he says.

It is indeed the case that for Copts, the security situation is almost always critical. Just a few weeks ago, at least 27 people were killed in a suicide attack on a church in Cairo. The so-called Islamic State claimed responsibility.

Younan Khalaf and the other Copts from Kom Al Loufi have to attend mass at other nearby churches. "At the moment we're praying in Ezbeth Raflah, that's about six kilometres away," he says. But they're not welcome there either. "One day, extremist Muslims blocked the road and forced us to turn around. Then they went to Ezbeth Raflah and warned the Muslims there that we would contaminate their ground if we worshipped there."

The small church in Ezbeth Raflah is guarded by two armed security officers. There are CCTV cameras everywhere. The priest, Father Filtawos, says these are "straightforward precautionary measures." He's new in the area and has worked for less than a year in Ezbeth Raflah. He is a placid man with a round face and a thin beard. He tries to exert a deescalating effect on the conflict groups, choosing his words carefully: "A few unpleasant things have happened in neighbouring villages. But I still need to understand what really happened there." 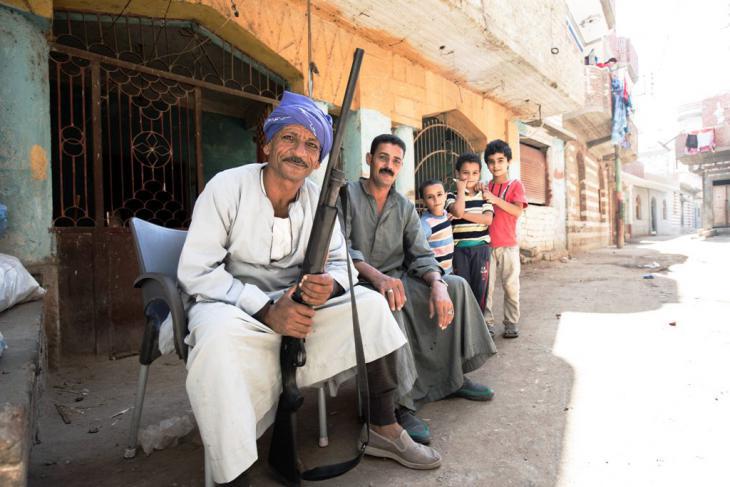 Forced to defend themselves: Egypt has seen a steady increase in violent attacks against its Coptic community. Since the end of 2010, churches have been the focus of repeated attacks by Islamist extremists. As here in Ezbeth Raflah, churches are now guarded by security personnel

Copts as the indigenous people of Egypt

The Copts regard themselves as quasi the "indigenous people" of Egypt. They were present before the Islamisation of most of the population in the 7th century, the name "Copts" is derived from the Greek word for "Egyptians". But since they have been in the minority, they feel like second class citizens, held back by the state and repeatedly used as a political football. In the 1970s, President Anwar Al Sadat entered into a pact with the Islamists, even forcing the Coptic Pope Shenouda III into exile. After the death of Al Sadat, relations between Copts and Muslims recovered slightly during the era of Hosni Mubarak. But the building of new churches was always a bone of contention.

"There are 90 churches in my province, although only half of them are real church buildings. The other half are just places in which we are allowed to hold our religious rituals. 150 villages have no place for worship at all," says Bishop Makarios of Minya. Sometimes the rooms are so small, that masses have to be held out in the open or in tents. The Bishop is convinced that the new law won't change that. Nevertheless, the Coptic Pope Tawadros II has expressed his great satisfaction at the development. "He urges us to show patience and hopes that the situation will improve in the future," says Bishop Makarios.

The authorities refuse to grant Kom Al Loufi a church 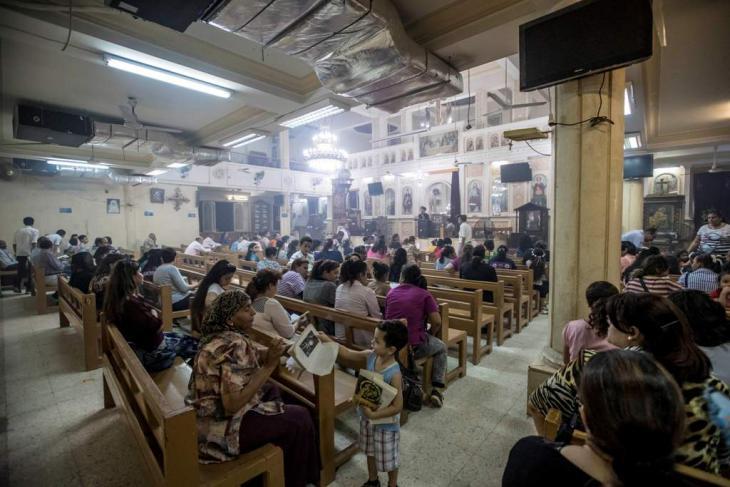 A makeshift church in a former factory: many of the churches belonging to Egypt′s Coptic Christian community have been destroyed. Bishop Makarios reports that of the ninety churches in his area, only half are housed in proper church buildings

The people of Kom Al Loufi have almost given up hope of getting their own church, because the authorities continue to refuse to grant planning permission. "In our village there are around 10,000 houses, including 22 mosques. And none of them needed planning permission," says Younan Khalaf, clearly irritated. There's a simple explanation, he continues: those responsible within the local authority are Muslims and primarily concerned with their own houses of worship.

Home
Print
Newsletter
More on this topic
Christians in Egypt: Persecuted and forgottenPolitical transformation in the Arab world: Forget the peopleChristian minorities in the Islamic World: No Arab Spring for Christians
Related Topics
'Islamic State' | IS, Abdul Fattah al-Sisi, Christianity, Christians in the Islamic world, Church, Democracy and civil society, Minorities in the Muslim world, Mohammed Morsi, Rule of law
All Topics

Abortions are illegal in Egypt unless they are necessary to save a married woman's life. But that doesn't stop local women from having one. Egyptian society needs to acknowledge ... END_OF_DOCUMENT_TOKEN_TO_BE_REPLACED

Food prices doubled, salaries halved, banks restricting withdrawals: Egyptians now have the same problems as the Lebanese. But if things get worse here, the fallout will be far ... END_OF_DOCUMENT_TOKEN_TO_BE_REPLACED

Giessen, Eichsfeld, Kusel, Berlin – cars bearing old German number plates are the latest trend on the streets of Cairo. Many Egyptians regard the discarded plates as chic. What ... END_OF_DOCUMENT_TOKEN_TO_BE_REPLACED

Egyptian Sufis have been on the defensive against the country's Islamists for decades. Meanwhile, interest in mysticism is growing among the young members of Cairo’s middle and ... END_OF_DOCUMENT_TOKEN_TO_BE_REPLACED

Chinese President Xi Jinping's visit to Saudi Arabia in December 2022 may have rattled Washington, but it simply highlighted the Arabs’ desire to diversify their foreign relations ... END_OF_DOCUMENT_TOKEN_TO_BE_REPLACED

END_OF_DOCUMENT_TOKEN_TO_BE_REPLACED
Social media
and networks
Subscribe to our
newsletter