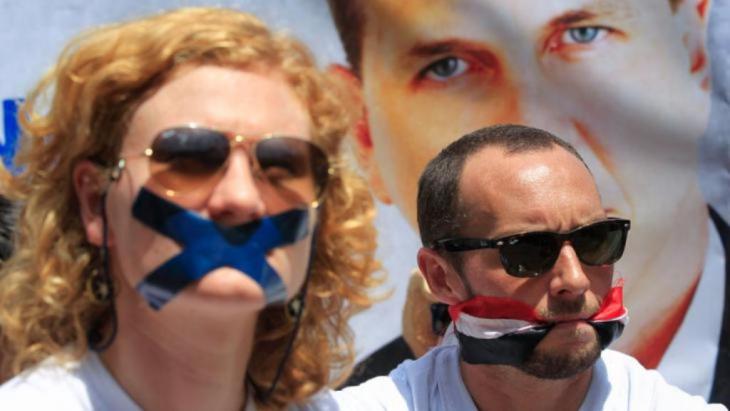 The anti-terror law passed in mid-August has struck fear into the hearts of journalists and bloggers in Egypt. It imposes legal limits on how they report terrorist attacks, severely curtailing freedom of speech. Background by Mustafa Hashem in Cairo

The new Egyptian anti-terror law criminalises the circulation of any reports on terrorist attacks that fail to corroborate the official version issued by the ministry of defence. Courts have also been empowered to impose a one year ban on journalists supposedly intending to do this. The law also stipulates that anyone promoting, encouraging or condoning a (vaguely defined) "act of terrorism", whether in public or private, should be punished in exactly the same way as someone who actually commits such an act – and that includes failed attempts. Terrorist crimes are no longer subject to a statute of limitations, while the circulation of putative falsehoods is treated in the same way as defamation of character.

According to paragraph 35 of this law, fines between 200,000 and 500,000 Egyptian pounds (20,000 to 50,000 euros) may be exacted from anyone "disseminating information about acts of terrorism that contradicts the official version issued by the ministry of defence". Since few journalists can afford such huge fines, they are either arrested, or put to work in a police station.

The government defends the law by pointing to the hundreds of police officers and soldiers who have fallen victim to extremist attacks since 2013. That was the year the army deposed President Morsi, member of the Muslim Brotherhood, following anti-government protests by large swathes of the population.

No mistaking the impact 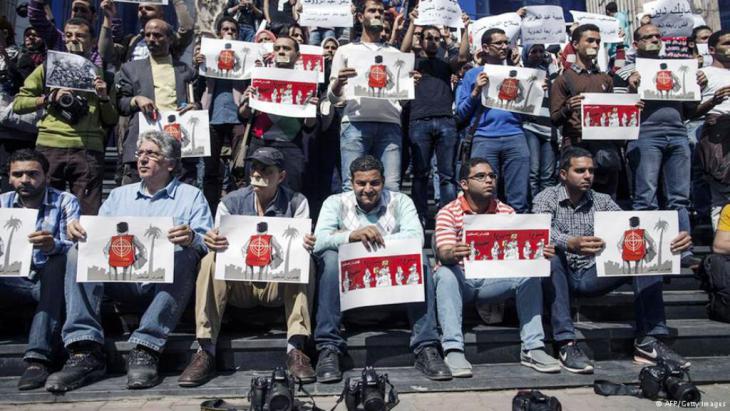 According to Khaled al-Balshi, who runs an Egyptian news website and is a member of the journalists′ union, the new law is already having an impact. Four days after it was passed, there was an attack on a security building in Shubra El-Kheima district of Cairo, in which 29 people were injured. For a whole hour, no-one dared publish the story for fear of circulating "false" information. As a result, people began writing about it on social networks instead. It was also reported on websites run by the Muslim Brotherhood from outside the country.

A few days ago, an entire newspaper was forced to cease publication because of the law, an act which al-Balshi regards as being in clear breach of the national constitution. At the same time, journalists close to the state are calling for laws to prohibit criticism of the president, and an extension of his authority.

"Our problem as journalists," says al-Balshi, "is that there are a lot of things the state considers incitement to violence and terrorism – anyone whose criticism is viewed as such can be punished. On the other hand, media close to the state aren′t prosecuted even when they stir up hatred. Take the newspaper that reported on the people demonstrating to commemorate the 25 January revolution: it ran a headline which read, ′Kill them!′"

But constraints were already in place before the new law was passed; they have been there since the end of the economic conference in Sharm el-Sheikh last March. Since then, according to one British journalist who wishes to remain anonymous, the authorities have been keeping a very close eye on what foreign agencies write about terrorist attacks in Egypt. Following the murder of the attorney general, the journalist reveals he was summoned to the foreign ministry, where he was advised to change some of the wording used in his reports on attacks and demonstrations. "We were told to change about 20 terms," the journalist explained. "Among other things, we′re meant to use ′terrorists′ or ′extremists′ rather than ′Islamists′". 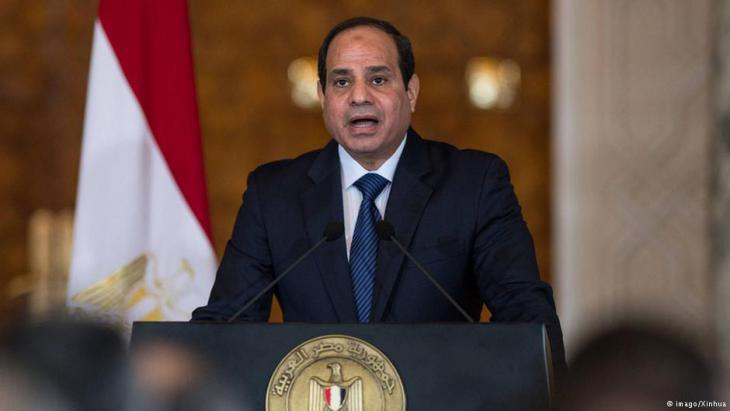 An iron fist against recalcitrant media representatives: according to an account by Christian Mihr, head of "Reporters without Borders Germany", the criminalisation of critical journalists under President al-Sisi′s leadership has reached an unprecedented level. He says critics are systematically persecuted in the name of security concerns and anti-terror laws

He goes on to say that the spokesman from the foreign ministry has also been in regular phone contact since. Official statements from the defence or foreign ministries, however, are difficult to come by. "The laws says you can be arrested if you report figures that differ from the official information. But what are we supposed to do when they don′t release any official figures?" the British journalist wonders.

He mentions the battles between the army and attackers in northern Sinai at the start of July. "We knew about the fighting," he says, "but we were waiting for official information. And when none came, we wrote our own report. It was evening before a statement was released, although the attacks had taken place at seven in the morning. The official numbers of dead and wounded were different from the ones we had."

Two foreign correspondents have already left Egypt, he says, because the authorities had become too intrusive. "Most of us will go. Whether it′s just intimidation or a message that we′re not wanted here, I don′t know. They′re just out to scare us off. The real problem though is for our Egyptian colleagues. They′re in real danger."

The law also covers online activists. On 29 August, according to official reports, three people were arrested for making "jihadist" statements on Facebook. This happened one week after the anti-terror law came into force, which speaks of "malicious use of the internet". Paragraph 29 gives a minimum jail term of five years for anyone running a website that "aims to spread ideas that will encourage terrorist acts". 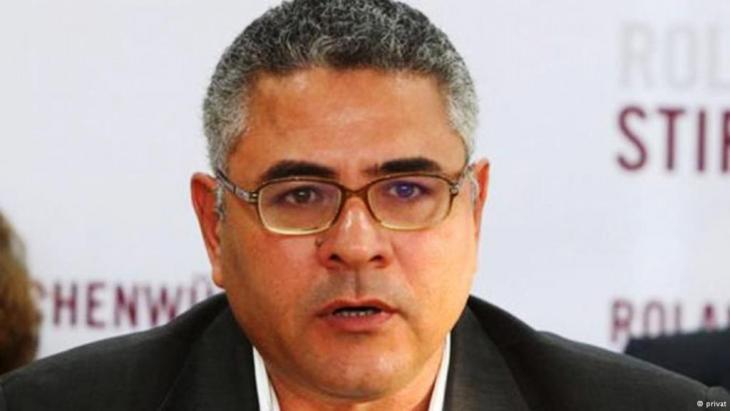 Gamal Eid: "You can′t intimidate defenders of free speech with repressive laws. At most they will conform to the style. And even if someone is arrested for publishing something different from the official version of a story, hundreds of others will carry on spreading his version."

The human rights lawyer Gamal Eid responded to this on Twitter saying, "Eight paragraphs of this law limit freedom to write and to publish online. This law doesn′t just threaten freedom of expression, it abolishes it!"

Among it all, however, Eid is able to focus on the positive: "You can′t intimidate defenders of free speech with repressive laws. At most they will conform to the style. And even if someone is arrested for publishing something different from the official version of a story, hundreds of others will carry on spreading his version. If you go up against young people, you′ll lose. You can′t turn the clock back, not with 50 million mainly young internet users in Egypt."

As to the question of whether there are organisations supporting journalists in their efforts to achieve greater press freedom, Khaled al-Balshi from the journalists′ union replies, "It should actually be the population supporting us in this. But unfortunately most people don′t, because the government has painted us in such a bad light."

His conclusion, however, is upbeat: "Flagrant violations of press freedom are being met by mutual support and resistance on the part of a core group of journalists."

In Doha, Arabs from Morocco, Tunisia, Egypt and Algeria are gathering to celebrate the first ever FIFA World Cup to be held on Arab soil. The criticism from Europe? Over the top, ... END_OF_DOCUMENT_TOKEN_TO_BE_REPLACED

November 2022 sees the Arab world firmly in the spotlight with the COP27 in Egypt and the FIFA World Cup in Qatar. Public trust in MENA governments is weak, thanks to their ... END_OF_DOCUMENT_TOKEN_TO_BE_REPLACED

Palme d’Or winner "Boy from Heaven" is a classic crossover film in which cultural elements are mixed together in haphazard and random fashion. Shady Lewis Botros bemoans the ... END_OF_DOCUMENT_TOKEN_TO_BE_REPLACED

COP27 in Sharm el-Sheikh is turning into a PR disaster for Egypt’s military regime. Instead of praise for the host, the news is full of solidarity for imprisoned activist Alaa ... END_OF_DOCUMENT_TOKEN_TO_BE_REPLACED

END_OF_DOCUMENT_TOKEN_TO_BE_REPLACED
Social media
and networks
Subscribe to our
newsletter