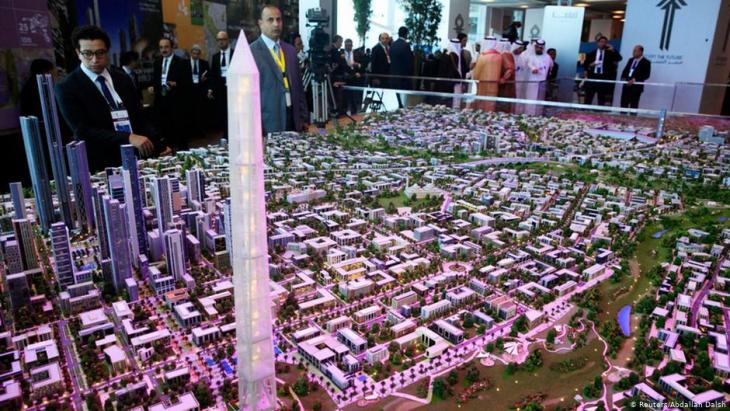 Years in the making, Sisi's elite New Administrative Capital will isolate most Egyptians from their centres of government in an effort to fortify the regime against any social pressures. By Maged Mandour

In July 2021 civil servants will start transferring to Egypt's New Administrative Capital, ahead of a planned official opening at the end of 2021. The mega-project is part of a massive urban planning effort. This includes investment in transportation infrastructure – roads and bridges – slum development, and the building of new cities – combining economic and regime security imperatives, rather than broader public good or sustainable economic development. Indeed, the regime is attempting to radically alter the national urban landscape with a special emphasis on Cairo, in a manner that would minimise the impact of mass urban disturbances, while allowing it to unleash massive repression at will.

The New Administrative Capital, with an estimated budget of $58 billion, is the most prominent example of this development strategy. The New Capital is the most expensive project undertaken by Abdul Fattah al-Sisi, dwarfing the $8 billion New Suez Canal. Accounting for 46 per cent of the total Egyptian foreign debt, which reached $125 billion as of the first quarter of 2020, this has become the flagship project of the regime.

Located in the desert east of Cairo, the planned New Capital will contain presidential palaces, government buildings, and a business district – with an estimated population capacity of 6 million residents. In essence, it is a clear attempt to move the centre of political and economic power away from troublesome Cairo, with its propensity for revolt.

Out of reach for most Egyptians

Moving to the New Capital is not a possibility for the vast majority of Egyptians, where a two bedroom flat is listed for $62,000, but the GDP per capita hovers around $3,000. This will anchor the New Capital with Egyptian elites, or those that are less likely to violently revolt and currently form the bulk of the regime's civilian support.

Through this development strategy, the regime is creating a new urban space where the possibility of urban unrest is limited and surrounding the centre of political power with a friendly population. Effectively, the regime is physically separating itself from Cairo and its narrow streets, where policing is more difficult and the mass of urban poor can destabilise government operations, either through strikes, occupation of urban spaces, or violent confrontation with the security forces. 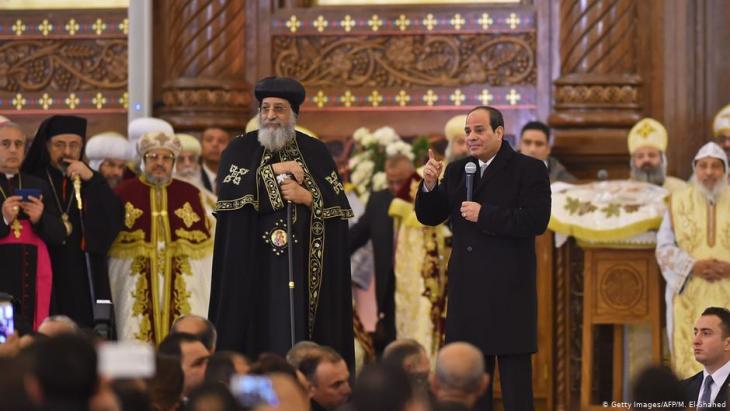 In January 2019, Egypt's President Abdul Fattah al-Sisi opened a new cathedral for the Coptic Orthodox Church and a massive mosque in the country's as-yet-unnamed new administrative capital, a major development located 45 kilometres east of Cairo. The move was a symbolic gesture at a time when attacks against the Coptic minority were rising. He is pictured here (right) at the inauguration alongside Coptic Pope Tawadros II

The construction of the New Administrative Capital concurs with a concentrated effort to alter the landscape of Cairo, to allow for faster deployment of military and paramilitary forces. This effort involves large investment in transport infrastructure. For example, the regime has embarked on a tremendous project, constructing 40 bridges, concentrated in the east of the city with a total budget of $895 million.

The quality of the planning for these bridges and the expected benefits to the residents of the city is dubious at best, with one bridge, Teraet Al-Zomor, being built a mere fifty centimetres away from the balconies of the residents. However, in the case of widespread social disturbances, these bridges can be used to increase the mobility of troops across the city. The road and bridge building frenzy did not spare the historic part of the city, with the Mamluk cemetery, a historic graveyard with valuable historic and architectural significance, partially demolished as part of the Paradise Axis project, a road development project going through the slums of Mansheya Nasir and Duwaika.

From slum to upper middle-class neighbourhood

The regime has also attempted to reengineer the social composition of slum areas, under the guise of slum development and upgrading of unsafe housing. Combining economic and security goals, a budget of 318 billion EGP ($20 billion) was made available for this goal, managed by the Fund for Slum Development.

The scheme involves upgrading some existing slums and relocating of residents of other slums to residential compounds, located on the outskirts of the city. For example, the upgrade of the Masspero triangle, the site of a slum that occupies a prime location by the Nile, with an estimated budget of $222 million. The development project will involve the complete demolition of the slum and its replacement with an investment and residential hub.

The residents of the slum were offered the option of relocation to the Asmarat neighbourhood, in the south-eastern part of the city, or a choice to return to their neighbourhood where they could rent or buy housing at an increased cost, or financial compensation of 100,000 EGP ($5,555). Seventy per cent of the residents accepted the financial compensation, vacating the area for upper middle-class elites to move in. This is, in effect, transforming the area from a slum to an upper middle-class neighbourhood, while relocating the residents to the outskirts of the city. The former slum is located behind the Foreign Ministry, close to the Radio and Television headquarters, both centres and symbols of political power. This forced relocation curtails the ability of the former residents to pressure the regime and makes it easier to physically repress those that moved to the new residential compounds.

In some slums where residents were allowed to return after reconstruction, the reach of the security forces had penetrated the neighbourhoods in an unprecedented manner. The residents also returned as tenants rather than homeowners, placing them at the risk of eviction at the will of the regime. For example, the Tal al-Aqarib slum, one of the oldest in the city, reflects this trend. Constructed by rural migrants in the 1920s, the slum was torn down in 2015, with residents returning in 2019. The residents returned as tenants and have reported increased police presence in their neighbourhood after the narrow streets were replaced with wide streets, which is more conductive to police patrols. This was accompanied by reports of increased police harassment.

The process of slum development disenfranchises slum residents, who are mostly relocated to the outskirts of Cairo (an estimated 850,000 people will be relocated between 2016 and 2021, 750,000 residents have already been relocated), but it also frees valuable real estate for the development of luxury housing and business hubs, as in the Masspero Triangle. Another prominent case is Al-Waraq island, the site of proposed luxury real estate development, which was the site of clashes between the security forces and the local residents in July 2017, as the security forces attempted to execute the order to demolish 700 houses. The plan to develop the island is being executed as part of a joint project between the government and the military engineering corp.

The regime's process of urban restructuring aims to facilitate easier and more effective containment and repression of wide scale urban uprisings. Sisi's regime fears the events of the mass unrest in 2011, when multiple police stations across Cairo – mostly in slums and lower income areas – were attacked and looted. Though this scenario is very unlikely under the current regime's tight control, in 2011 attacks on police stations were decisive in exhausting security forces.

The regime, through population relocation has changed the demographic composition of vital areas close to centres of government. In essence creating a demographic buffer. Additionally, the regime has embarked on a systematic process of changing the transportation infrastructure to accelerate troop movements across Cairo, allowing it to repress unrest wherever it appears. Finally, in what appears to be a radical solution to the regime's security concerns, an elite new capital city is being built in the desert, where the urban poor are not welcome. This will allow the regime to survive even if it loses control over large population centres like Cairo or Alexandria, where it can unleash mass repression on these cities with devastating loss of life.

Since President Abdul Fattah al-Sisi seized power in Egypt in 2013, he has ruled the country with an iron fist. Civil society, opposition and free press struggle to survive. Tens ... END_OF_DOCUMENT_TOKEN_TO_BE_REPLACED

The lack of grain supplies from Ukraine is forcing Egypt to act. Now even the Toshka project is being revived to grow grain in the desert. Birgit Svensson travelled to see it END_OF_DOCUMENT_TOKEN_TO_BE_REPLACED

In this unusually beautiful book of images and text, published in German and Arabic, artist Marianne Manda presents her own unique take on the megacity of Cairo. In over fifty ... END_OF_DOCUMENT_TOKEN_TO_BE_REPLACED

A stage, lights, a mesmerised audience: it looks like an Egyptian folkloric concert, but Umm Sameh is singing to heal the sick by driving out the demons that possess them END_OF_DOCUMENT_TOKEN_TO_BE_REPLACED
Author:
Maged Mandour
Date:
Mail:
Send via mail

END_OF_DOCUMENT_TOKEN_TO_BE_REPLACED
Social media
and networks
Subscribe to our
newsletter