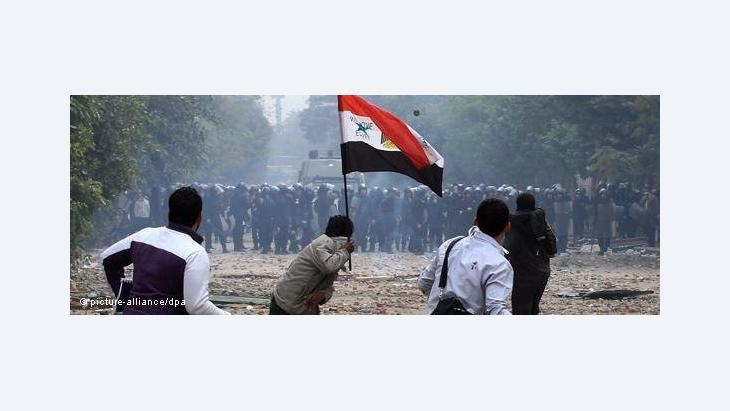 The upcoming elections in Egypt will be the first free parliamentary poll after three decades of Mubarak's rule, and their outcome will have a key influence on the political future of this large Arab nation. But the process is being overshadowed by irritation at the complexity of electoral regulations, economic insecurity and recent unrest. Amira El Ahl reports from Cairo

Let it be said right at the outset: the whole thing is very complicated. From 28 November, those who want to put their X in the right place in the first free parliamentary elections since the ousting of Hosni Mubarak need to take the time to familiarise themselves with the new electoral system.

"It even took me a while to understand it," admits Hoda Nasralla, lawyer and Socialist candidate in the constituency of Shubra in northern Cairo. The experts agree: the new voting system is complicated and difficult for the average Egyptian to understand.

Add to this the fact that Egyptians feel a sense of deep general malaise. Their primary concern is the perpetually worsening economic situation and the prolonged strikes. A study published in September by the International Peace Institute (IPI), a New York-based NGO, revealed that the number of Egyptians who believe their nation is progressing along the right path has fallen to 50 per cent. 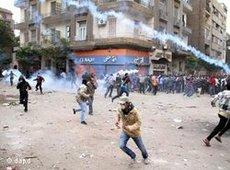 The most serious clashes since the end of Mubarak's dictatorship: in recent days, the police and the army in many Egyptian cities have been cracking down on demonstrators demanding the resignation of the military government

​​Forty-two per cent of those polled said they thought Egypt was moving in the wrong direction. Responding to the same question back in March, 82 per cent of those polled expressed a positive view. Almost two-thirds of those polled cited the economy as the country's most pressing problem, twice as many as in March. Following close behind are worries over the continuing protests, instability and the nation's rising crime rate. Many Egyptians say they feel economically and physically less secure today than they did under the old regime.

As a result of this insecurity, 67 per cent of Egyptians say they still don't know for whom they are going to vote starting on 28 November; that's a 40-per cent increase on the figures for March.

One of the reasons for this is likely to be the great number of new political parties that have been formed since the toppling of Mubarak. While up until February just a handful of parties took part in the political process – a process that was exclusively directed by the National Democratic Party (NDP) – today there are at least 55 officially registered parties in Egypt.

Over the past few months, these groups have repeatedly joined forces in a variety of new coalitions in the hope of increasing their chances of entering parliament. But these constantly changing alliances have only served to unnerve Egyptians all the more. This insecurity is also reflected in the IPI study, which shows that at present, no party would garner more than three per cent of the vote.

There is much at stake in this election. It is not only historic for being the first free parliamentary poll after three decades of Mubarak, the outcome will also have a decisive influence on Egypt's future political direction.

In a referendum held on 19 March, 77 per cent of the country's 18 million voters voted in favour of constitutional change. Among other things, the result also stipulated that the new constitution should only be drawn up after the election of the new parliament.

"Parliament has one role, and only one: to write a new constitution," says Emad Gad, analyst at the Al-Ahram Centre for Political and Strategic Studies. The March referendum suspended the Egyptian constitution, which had been in force since 1971. After the parliamentary elections, a constitutional commission made up of 100 selected deputies will hammer out a draft constitution within six months, which will then be put to the public vote in a referendum.

So every vote counts. To this end, volunteers are travelling up and down the country and Egyptian television is running infomercials aimed at explaining to voters how to elect their representatives. 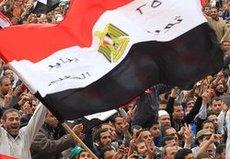 Holding fast to the achievements and objectives of the revolution of 25 January: in the run-up to the parliamentary elections, many Egyptians feared that the Supreme Military Council might cancel the elections and tighten its grip on power

​​The last amendments to parliamentary legislation made in September by the military council reduced the number of seats from 504 to 498. Ten further seats will be filled by the head of the council, Field Marshal Hussein Tantawi, in his capacity as acting president.

The lower and upper house will both be elected in three phases. In each phase, voters from nine of the country's 27 governorates will be invited to cast their ballots. The elections are being extended over a period of almost three months – ostensibly for security reasons. Officials say staggering the process makes it is easier to ensure that everything goes smoothly.

The first round of elections to the lower house begins on Monday, 28 November in the governorates of Cairo, Fayoum, Port Said, Damietta, Alexandria, Kafr El-Sheikh, Assiut, Luxor and Red Sea. The run-off is scheduled for 5 December.

The second round begins on 18 December in the governorates of Giza, Beni Suef, Menufiya, Sharqiya, Ismailia, Suez, Beheira, Sohag and Aswan. The run-off vote here is scheduled for 21 December.

The third and final round of elections to the lower house begins on 3 January in the remaining nine governorates of Minya, Qaliubiya, Gharbiya, Daqahiliya, South Sinai, North Sinai, Matrouh, Qena and El-Wadi El-Gadid, with run-offs set for 10 January.

The new electoral law stipulates that two-thirds of the deputies in the lower house – or 332 seats from 46 constituencies – be elected through the closed party lists system. The remaining 166 seats are divided up between 83 constituencies and taken up by independent candidates. This combined system means that voters must cast two ballots and fill out two papers in the booth: one for the party lists and one for the independent candidate. 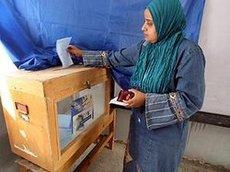 According to Amira El Ahl, the new Egyptian electoral system is so complicated that Egyptian voters really need to take the time to familiarise themselves with it before the upcoming elections

​​Each constituency operates a proportional system for the closed party or coalition lists. "If 100 people vote in a constituency with 10 seats, and the top party secures 40 per cent of the vote, while the second and third parties secure 30 per cent each, then the first party will win four seats, while the second and third parties each win three seats," explains Mohamed Salah, a researcher at the Economic Research Forum. Candidates placed at the top of the winning lists are the first to enter parliament. This means that voters cannot cast a ballot for a particular candidate.

Between four and 10 seats are up for grabs in each constituency, depending on its size. The independent candidates on the second list must secure a majority to be able to enter parliament. If none of the candidates receives more than 50 per cent of the vote, the two first-placed candidates will compete in the run-off.

No quota for women

The new party law cancelled the 64-seat quota for women that had only just been introduced in November 2010 in time for the last parliamentary poll. It was substituted with the stipulation that each party list must include at least one female candidate. But parties are free to choose to place that female candidate anywhere on the list, and the further down the list she is, the less likely it is that she will win a seat. If that female candidate is, for example, placed tenth on the list, then her party would have to win 100 per cent of the vote to enable her to enter parliament. The clause has come in for some heavy criticism from women's rights groups, who say it drastically reduces women's chances of political participation in parliament.

The complicated revision of electoral law has repeatedly come under fire in recent months, and the long drawn-out voting period is also a thorn in the side of many. After all, as it currently looks on paper, the military council will be running the country until 2013.

Many people feel this is much too long. In February, people were told that the military council would only be running the country for a transitional phase of six months, before handing over control to a civilian government. But like so many others, this pledge was not honoured. If everything goes according to plan, and the elections are not delayed because of rioting or excessive violence, something that many Egyptians fear, then it will be early 2013 before a new president can be elected – at the very earliest.

Up to now, the election campaigns of the political parties have passed off without incident. "The security apparatus is trying to act in a transparent manner," says Amr Hamzawy, the founder of the Egypt Freedom Party, who is standing in the elections as an independent candidate. But the politician is nevertheless worried. He regularly hears from members of the public who say they will be afraid to go out and cast their ballot because of the rioting and the armed gangs out to cause mayhem.

"These are horror scenarios that have been disseminated by particular groups who want to prevent people from casting their votes," warns the political scientist. But not voting out of fear is no solution, he adds. "We need a voter turnout of more than 50 percent, otherwise we'll be way off any kind of democratic decision," he says.

Home
Print
Newsletter
More on this topic
The Reaction of Egyptian Politicians to the Elections in Tunisia: ''Egypt Is Not Tunisia! Or Is It?''Egypt before the First Post-Mubarak Parliamentary Election: Organised UncertaintyDemonstrations against the Military Council in Egypt: The Revolution Comes First
Related Topics
Arab Spring, Arabellion, Egypt Revolution 2011, Egypt's army, Muslim Brotherhood, Power struggle in Egypt
All Topics

Tourists have been returning to Tunisia, Egypt and Morocco. But, given the global uncertainty caused by the Ukraine war, will the comeback be enough to save a struggling sector, ... END_OF_DOCUMENT_TOKEN_TO_BE_REPLACED

In this essay, renowned Lebanese journalist and writer Hazem Saghieh asks whether the Arab Levant, which stretches from Iraq in the east to Egypt in the west, will remain an ... END_OF_DOCUMENT_TOKEN_TO_BE_REPLACED

By 2050, the Middle East and North Africa could be dealing with many more elderly people suffering from dementia. A lack of facilities, specialists and local knowledge means the ... END_OF_DOCUMENT_TOKEN_TO_BE_REPLACED

With his fist bump greeting for a man he previously called a pariah, US President Biden has paved the way for Saudi Crown Prince Mohammed bin Salman's return to the international ... END_OF_DOCUMENT_TOKEN_TO_BE_REPLACED
Author:
Amira El Ahl
Date:
Mail:
Send via mail

END_OF_DOCUMENT_TOKEN_TO_BE_REPLACED
Social media
and networks
Subscribe to our
newsletter