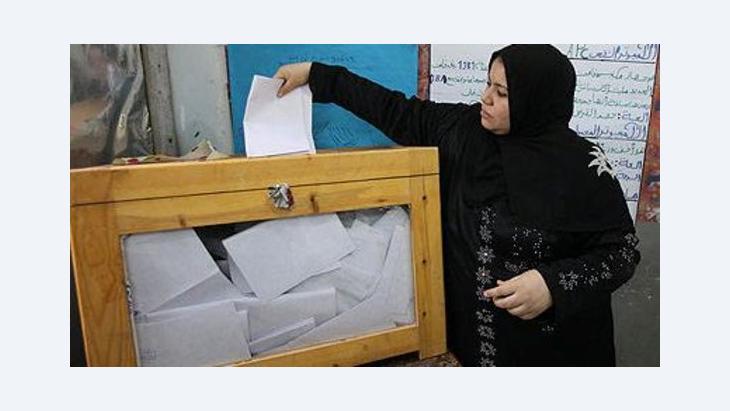 Making the Best of a Bad Lot

With parliament dissolved, Egyptians find themselves caught between a rock and a hard place ahead of the imminent run-off for the presidency. For many, neither ex-Air Force leader Ahmed Shafiq nor the Muslim Brotherhood's Mohamed Mursi represent a credible choice. Claudia Mende reports from Cairo

This weekend some 50 million Egyptian who are eligible to vote are faced with a tough choice as the presidential race goes into the final strait. The nation has been on tenterhooks ahead of this decision for weeks. The office blocks and courtyards of Cairo are decked out with gigantic posters. The candidates' faces line four-lane highways, downtown shops and the rubbish-strewn alleyways of the city's slums.

The choice is between two candidates both of whom trigger a sense of deep frustration among supporters of the Tahrir Square protest movement: For them, ex-General Ahmed Shafiq and the Muslim Brother Mohamed Mursi embody the alternative between reinstatement of the old regime and the dominance of the Islamists. Police state or theocracy – apparently this is the only question being posed at this juncture.

Ahmed Shafiq, a former Air Force Chief of Staff, is a man of the Mubarak regime. During the Mubarak era he was Minister of Civil Aviation from 2002, successfully overhauling the Egyptian state airline Egypt Air during his time in office, opening it up to foreign investors. There are claims however that this process was marred by large-scale irregularities.

The figure of Shafiq remains shrouded in accusations of corruption on other counts. Trade unionists accuse him of embezzling funds from the old trade union umbrella organization, which was probably more like a self-service shop for those loyal to the regime, rather than a body that genuinely represented the interests of working people.

There are also persistent rumours that Shafiq was behind the camel attacks on demonstrators on Tahrir Square on 25 January 2011. More than 10 people were killed and numerous others injured in the incident. Following the deaths, a group of activists calling themselves the "Alliance of Egyptian Revolutionaries" brought an action against Shafiq with public prosecutors. 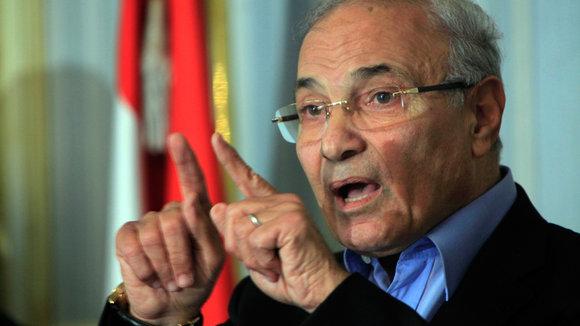 A figure from the old regime: During the election campaign Ahmed Shafiq, the last prime minister appointed by Mubarak, made no secret of the fact that he blamed demonstrators for the collapse in public order

​​A staunch ally of Mubarak, the president appointed Shafiq his last prime minister in January 2011. The "law and order" man has already indicated that if elected, his first priority will be to use a firm hand to restore calm across the nation. If Shafiq is elected, this would lend the military government a sheen of democratic legitimacy.

But Shafiq does enjoy some support – in the secular camp, but also among the Coptic community. Many Egyptian Christians fear the prospect of a member of the Muslim Brotherhood as president. But Shafiq is however a thorn in the eye of supporters of the protest movement, for the simple reason that he is quite clearly a representative of the old elite and the military. Not only does the army dominate the nation politically, it also has its own economic empire that is not subject to democratic control. Shafiq would certainly do nothing to disturb this state of affairs.

Following the toppling of Mubarak, the Islamists have become the nation's second largest political force. In 2011, they founded the political arm of their movement, the "Freedom and Justice Party". Their candidate, Mohamed Mursi, is a newcomer to Egyptian politics. A member of the movement for many years, he is an engineer, studied rocket technology in the US and like many of the Muslim Brothers, served several years in prison during the Mubarak era.

Mursi is regarded as uncharismatic and completely loyal to the cadre party. He was mocked as a "spare wheel" during the election campaign as Muslim Brotherhood's reserve choice. He is promising Egyptians social justice and a way out of poverty. The party's favourite, Khairat al-Shater, was excluded from the race by the electoral commission, and Mursi was put up as the replacement candidate. His election posters are mostly in evidence in the poorer districts of Cairo. 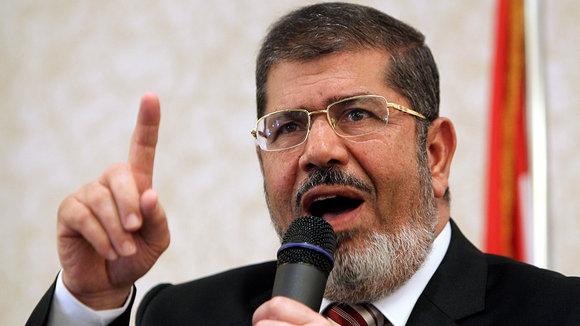 Second choice: The Muslim Brotherhood candidate Mohammed Mursi is regarded as uncharismatic and completely loyal to the cadre party. A qualified rocket scientist, he was initially seen as an emergency solution when the party's first-choice candidate Khairat al-Shater was not authorized by the electoral commission

​​But in contrast to the parliamentary elections, the Islamists have already lost some of their momentum. While the Muslim Brotherhood and the Salafists won the parliamentary poll with some 70 percent of seats, things didn't look quite so rosy for representatives of Islam in the presidential race. Two Islamist candidates together garnered around a third of all votes.

One other Islamist entered the race in addition to Mursi, the former Muslim Brother Abdel Moneim Aboul Fotouh. The Brotherhood had excluded him because he had already announced he would be running for the presidency against the party line back in 2011. At the time, the Brotherhood was still adamant that it would not be putting up a candidate at all. Now, as an independent Islamist, Aboul Futouh deprived Mursi of a substantial number of votes in the first round – but both results were a far cry from the landslide-style victory of the Islamists in the parliamentary poll.

On a downward trend

"The Islamist movement has lost a lot of support," says political analyst Ammar Ali Hassan from the Nile Center for Economic and Strategic Studies in Cairo. "Opinion polls have shown that most of the population are is not satisfied with the Muslim Brotherhood's performance in the newly elected parliament."

The Muslim Brothers and their candidate Mohamed Mursi are also aware of this. This is why Mursi adopted a moderate stance after the first round, pledged to integrate the Copts into the political process and not to impose any Islamic dress code on women. Revolutionary groups such as the 6 April Youth Movement have expressed a wish to hold consultations with the Muslim Brotherhood ahead of the vote. But it is doubtful whether their efforts will be successful. 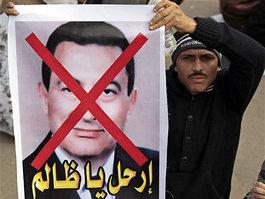 "Get lost, repressor!": Although Egypt's path to democracy looks set to be a long one, a return to the oppressive climate of the Mubarak era is out of the question for both presidential candidates

​​The decisive question will however be whether the military council honours its pledge to hand over power to a civilian authority by an agreed deadline if Muslim Brother Mohamed Mursi should win the election. According to their own timetable, the generals plan to stand down on 30 June. After 60 years of military dictatorship, Egypt is to receive a democratically elected government.

"You can't turn back time," says Ammar Ali Hassan. He believes certain milestones attained since the toppling of Mubarak in February 2011 are irrevocable. These include the consensus that there will no longer be a presidency for life and no "hereditary monarchy".

Mubarak had latterly begun grooming his son Gamal as a potential successor. Ammar Ali Hassan also says that the political culture of the nation has changed, the stagnation of the Mubarak years has been broken triggering a new interest in public welfare, among young Egyptians in particular.

"The next president will not be a Pharaoh"

For the journalist and screenwriter Bilal Fadl, the new president will enter office under completely new conditions, regardless which of the two candidates wins the race. This was already evident from the first ever televised debate between the two in Egyptian history, he says. During this media exchange of blows a presenter put the protagonists in their places if they talked for longer than their allotted time – something that would have been inconceivable in the Mubarak era.

"This is a clear break with the old regime," says Bilal Fadl of the independent daily newspaper Al-Shourouk. "The unambiguous message of this television duel is: The next president will not be a Pharaoh." The ousting of Mubarak has also given rise to a critical public ready to interfere in the political sphere and ignore all the red lines and taboos of old.

At Al-Shourouk, Fadl is responsible for a satirical page called "The Juicer", where he issues a scathing commentary on political life. "We take them all on," says the journalist "regardless of the length of the beard, whether they are wealthy Saudis or powerful members of the military." Just like Bilal Fadl, there are other journalists, bloggers and activists criticizing both the governing military council and representatives of the old regime and the Islamists, regardless of whether they are moderates or Salafist hardliners.

Egypt's battle for democracy is set to continue for some time, Bilal Fadl is also convinced of that. The role of the army within a civilian-run state and the abuse of religion by the Islamists will be the key issues dominating public life in the coming years. But neither Ahmed Shafiq nor Mohammed Mursi can take the nation back to the dark age now associated with Hosni Mubarak.

Home
Print
Newsletter
More on this topic
Presidential Elections in Egypt: A Duel That Nobody WantedInterview with Ahmed Maher: ''A victory for Ahmed Shafik would be the end of the revolution''Verdict in the Mubarak Trial: The Ancien Regime Absolves Itself of Guilt
Related Topics
Abdul Fattah al-Sisi, Ahmed Maher, Arab Spring, Arabellion, Democracy and civil society, Egypt Revolution 2011, Islamism | Political Islam, Muslim Brotherhood, Power struggle in Egypt
All Topics

Two refugees detained in Egypt are facing deportation to Eritrea. The expulsion of the Eritreans, who have been incarcerated in Cairo for more than eight years, has been halted ... END_OF_DOCUMENT_TOKEN_TO_BE_REPLACED

International relations are shifting across the Middle East as regional powers adapt to America's retrenchment and China's growing influence. Although the region could become the ... END_OF_DOCUMENT_TOKEN_TO_BE_REPLACED

Germany's foreign policy is explicitly values-based. But what happens, Ralf Bosen asks, when democracy, the rule of law and human rights collide with the logic of trade and ... END_OF_DOCUMENT_TOKEN_TO_BE_REPLACED

Egyptian author Nadia Wassef talks about opening the first independent bookstore in her home country; and her latest book in which she celebrates books and booksellers. By Manasi ... END_OF_DOCUMENT_TOKEN_TO_BE_REPLACED

"The people aren’t ready for democracy" has been the constitutional basis for Arab tyranny, its favourite slogan and its sacred narrative for more than a century. Yet, asks Khaled ... END_OF_DOCUMENT_TOKEN_TO_BE_REPLACED

END_OF_DOCUMENT_TOKEN_TO_BE_REPLACED
Social media
and networks
Subscribe to our
newsletter