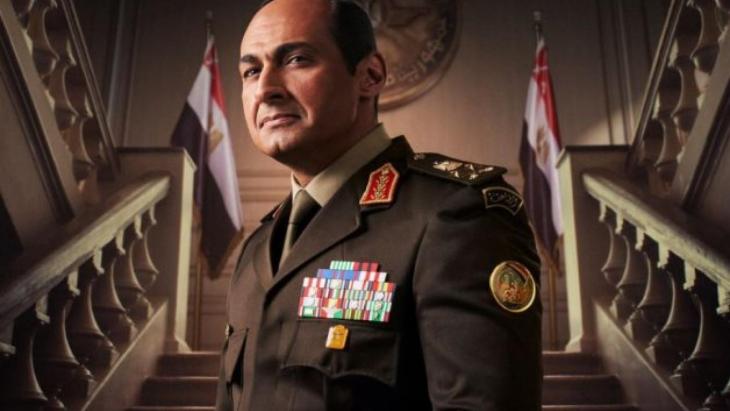 In the third series of "El-Ekhteyar", actor Yasser Galal delivers a remarkable performance in the role of Egyptian President Abdul Fattah al-Sisi, attracting admiration and ridicule in equal measure. By Shady Lewis Botros

TV dramas, especially those produced for broadcast during Ramadan, have always played a central role in national indoctrination in Egypt. It was no accident that the 1960s saw both the launch of national television channels across the region and the rise of post-colonial regimes. Television, and subsequently radio, replaced the printing press, broadcasting a unified sense of collective identity, similar taste and agreed language, alongside standard and consistent models of aesthetics and morality.

Allegory has proved one of the most popular art forms when indoctrinating the masses; it presents a neat array of tropes capable of being read like a table of one-to-one analogies. In other words, the neighbourhood drama or the inter-generational family series is a metaphor for the nation. Its protagonists are representatives of its classes and its constituencies, at times joining together and at times clashing. Sometimes even the series' seasons are arranged strictly in line with history.

Although this is arguably drama at its most primitive, if not most simplistic, one can't deny its effectiveness on a mass scale. It has the minimum level of subtlety, which creates ample space for the viewers to get drawn into sympathising with the characters, like characters in a play, rather than allusions of wider import. At the same time, its easy-to-decipher code makes it possible to imbibe the underlying narrative without difficulty, even unwittingly.

It shows the 2013 coup and Rabaa massacre from a pro-govt/military perspective and presents Sisi as a pious strongman doing his duty.

The President's take on history

With each season of "El-Ekhteyar" – that's three consecutive seasons – the 30th June regime, as Sisi’s government is known, has re-written recent history and the events of the coup itself through television, i.e. the clash between the Muslim Brotherhood and their elected representatives in government, alongside the military and security agencies. This confrontation has been dealt with from more than one angle, and in various forms, one season after the other.

What is at issue is the extraordinary understanding by the regime's propaganda machine of the power of narrative, now and in the future. Drama series live in the memory longer than school history curricula, but their effect extends beyond direct knowledge of events; they reach deep below the surface, through intertwined bundles of memories, feelings, images, sympathies and affiliations.

The Egyptian regime has nothing it can use to justify its staying in power, given the continuous decline in living standards in the country; it can only recycle the same old story, which weaves within it the equation of existential threat and this regime as saviour. This remains its only trick. Repetition has a magical effect, as everyone knows, yet it doesn’t always work.

In the current and third season, the makers of "El-Ekhteyar" forgo the mystical ideal, and with it, the techniques of representation, projection or intermediacy. In the previous two series, the heroes were either the police or the military, portraying real-life characters; they were also metaphors for the institutions to which they belonged. Thus, the format of the docudrama used by director Peter Mimi was best suited to this duality of reality and allegory.

This third series climbs to the top of the pyramid in terms of the characters it portrays, to the very head of the regime itself, or rather it slides down the ladder in terms of aesthetic appeal. Mimicry is the most straightforward technique, but it is also the biggest gamble in terms of audience empathy. With impersonation, viewers either identify with the character of the president and his entourage, without any intermediation this time round, or the opposite is true, and the work – with its implicitly credible characters – becomes an object of criticism or even ridicule.

Leaving aside the crude polarisation of good versus evil in the work, Yasser Galal's portrayal of Sisi has attracted the most derision, not because his impersonation is poor, but rather because he imitates Sisi to a tee. Galal’s lookalike character, his verbal inflections and body movements, superbly well-acted, prompt laughter – such as you might expect when watching a comic impersonation.

In the routine of mimicry, Sisi shrinks to a small number of vocal and physical aspects. All-too-obvious, figural and superficial elements are duplicated and repeated in a quasi-robotic fashion, just like the regime’s propaganda machine – same old same old.

In this unusually beautiful book of images and text, published in German and Arabic, artist Marianne Manda presents her own unique take on the megacity of Cairo. In over fifty ... END_OF_DOCUMENT_TOKEN_TO_BE_REPLACED

A stage, lights, a mesmerised audience: it looks like an Egyptian folkloric concert, but Umm Sameh is singing to heal the sick by driving out the demons that possess them END_OF_DOCUMENT_TOKEN_TO_BE_REPLACED

Russia's ranking on the World Press Freedom Index has fallen again over the Kremlin's wartime censorship of the Ukraine conflict. From Myanmar to Mexico, journalists continue to ... END_OF_DOCUMENT_TOKEN_TO_BE_REPLACED

From the Euphrates to the Mekong, dams that ensure one country's water supply risk leaving others parched. But shared water resources can be a source of peace as well as conflict ... END_OF_DOCUMENT_TOKEN_TO_BE_REPLACED

END_OF_DOCUMENT_TOKEN_TO_BE_REPLACED
Social media
and networks
Subscribe to our
newsletter