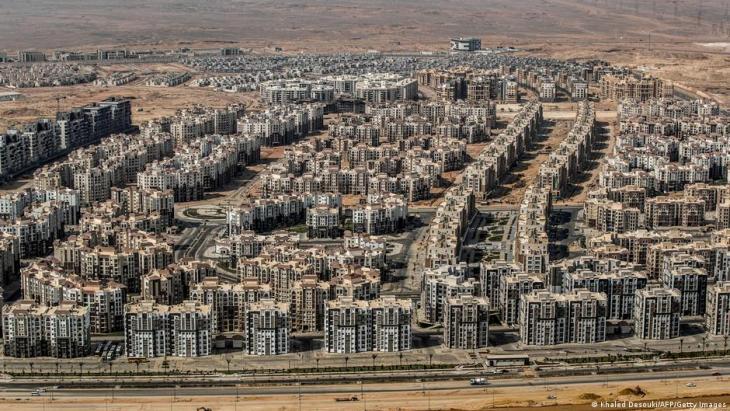 Egypt’s military regime is tirelessly modernising roads, public transport and industry across the country and erecting a luxurious administrative capital for the upper class. But the construction boom is primarily financed on credit – Cairo is racing headlong into a debt crisis. By Sofian Philip Naceur

Occasionally political agendas are worth reading carefully. After Egypt’s former military chief Abdul Fattah al-Sisi delayed publishing an official electoral agenda for weeks prior to the 2014 presidential elections, a draft in which the former army general set out his "vision" for Egypt’s future was ultimately released shortly before the ballot – and this document, today only to be found in online archives, is quite something.

Just days prior to the vote, Sisi, who has ruled with an iron fist since his bloody 2013 coup against the government of former President Mohamed Morsi, promised not only the construction of 20,000 new schools and enormous land reclamation projects, but also the establishment of 22 new industrial cities, 25 tourist towns, eight airports, three ports and the massive expansion of Greater Cairo towards the Gulf of Suez.

What at first appeared to be an unrealistic list of outsize campaign promises has, however, turned out to be a pretty accurate prediction of the modernisation policy pursued by Sisi since.

These days the country resembles a large-scale construction site. Cranes and concrete mixers are ever-present in Greater Cairo, Alexandria, along the Mediterranean coast, the Nile Delta, in Upper Egypt and on the Sinai Peninsula. New housing projects, bridges, hotels and luxury real estate developments, not to mention industrial zones and modern public transport infrastructure, are mushrooming across the country.

More than 7,000 kilometres of roads and highways are said to have been built or restored. While large land reclamation and agricultural projects are being established in the Upper Egyptian desert and west of the Nile Delta, Sisi is consistently adhering to the 'new towns' policy, which is actually considered a failure, and is having one new desert settlement being built after another in Greater Cairo, Upper Egypt and on the Mediterranean. According to current government figures, a total of 37 new cities are planned, 17 of which are already under construction. 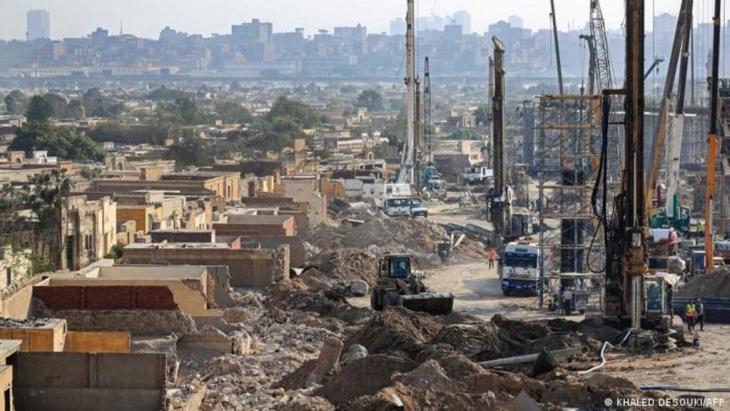 Construction of a motorway through the middle of Cairo's historic City of the Dead, one of the city' s largest cemeteries. In 2020, bulldozers ploughed up old huts and burial chambers - despite protests from residents and UNESCO. People unable to afford the horrendous Cairo rents had found a home here and were evicted en masse. The regime's policy of modernisation ruthlessly targets Egypt's cultural heritage and the impoverished masses

One of these new towns is being relentlessly hyped by the military leadership, the state and the private real estate sector. Since 2015, a New Administrative Capital (NAC) for 6.5 million people has been under construction east of Cairo’s affluent gated communities of New Cairo, Tagamma el-Khamis and Madinaty.

A new government district has already been completed, as have a new airport, a gas power plant built by the German Siemens Group, a hotel and conference centre, several upscale residential neighbourhoods, a mosque, a Coptic cathedral and hundreds of kilometres of roads.

Since 2017 a company owned by the Chinese state has also been building – at breath-taking speed – a new business and banking district composed of 20 high-rise towers at the heart of the New Capital. While the first towers are said to have been completed in mid-2022, contractors are currently putting the finishing touches to two railway projects connecting the NAC with Cairo’s city centre and the metropolis’ public transport network.

The construction of new sports facilities and cultural venues is progressing just as rapidly as the construction of the Octagon, the new Ministry of Defence located southwest of the New Capital, whose astronomical size outstrips all previously erected government buildings by far.

The idea of building a new administrative district is nothing new. Back in the 1960s, President Gamal Abdel Nasser’s regime was already flirting with the idea of relocating government institutions to Nasr City, located on the eastern outskirts of the city. In the 1970s, his successor Anwar el-Sadat even began relocating a ministry to Sadat City, a satellite city located about 50 kilometres northwest of Cairo.

But the project was halted and not revived until the 2000s, when former President Hosni Mubarak revived the idea in a modified way. Before Mubarak could take any tangible steps in that direction, however, he was ousted by the 2011 revolution.

A fortress for state elites

While the country went through a period of rapid flux between 2011 and 2013, the military, still pulling the strings behind the scenes, was already preparing for the time after Egypt’s democratic transition, quickly laying the foundations for the long-term safeguarding of military rule following Sisi’s bloody coup in 2013. Using police violence, state propaganda and a diverse range of reprisals, the old balance of power was swiftly restored.

But the military establishment, once again all-powerful, drew its lessons from the popular uprising – a repeat of which the elites are determined to prevent at all costs – and in 2016 moved the Ministry of Interior, previously located near the iconic Tahrir Square, to New Cairo on the city's outskirts.

With the New Capital walled in and surrounded by numerous upper-class gated communities, the regime is now going a step further, erecting a veritable fortress for the state, the military and the society’s elites, who can thus wait out any storm on Egypt’s streets in the event of a renewed uprising.

The gigantic scale of the NAC is therefore less a symbol of the strength of Sisi’s regime and more a sign of its weakness, revealing more clearly than ever just how afraid Egypt’s elite is of yet another uprising by the rest of the population.

Meanwhile, Egypt is again mired in a severe economic, monetary and balance of payments crisis. The capital flight from Egypt triggered by the pandemic and Russia’s invasion of Ukraine has caused currency reserves to collapse; a new loan agreement with the International Monetary Fund is about to be finalised. Yet the construction and real estate boom continues unabated, despite socioeconomic distress and empty state coffers, and is supported to a considerable extent by loans from abroad worth billions and the sell-out of state property.

Both the construction of the business district in the NAC and the two railroad projects linking the New Capital with Cairo are backed by loans from China and France. A nuclear power plant on the Mediterranean built by the Russian state-owned company Rosatom, the 2,000-kilometre high-speed train network established by Siemens and others, the construction of new metro lines in Cairo, as well as several water and wastewater projects, are also being financed on credit. Meanwhile, a new study by Germany’s Stiftung Wissenschaft und Politik clearly indicates the extent of Egypt’s debt rate increase since 2013.

A "well-choreographed mix of incentives, threats and deception" has allowed the presidential power hub to accumulate more and more new debt, the study says and warns urgently of national default. While debt service eats up significant portions of the state budget, the costs of Sisi’s modernisation policies, tailored to the needs of the wealthy, are passed on to the majority of the population, whose purchasing power continues to decline due to inflation and currency devaluation. Sisi’s elitist construction policy is risky. New loans have continued to flow in, but discontent is once again increasing strongly in Egypt’s society.

In Doha, Arabs from Morocco, Tunisia, Egypt and Algeria are gathering to celebrate the first ever FIFA World Cup to be held on Arab soil. The criticism from Europe? Over the top, ... END_OF_DOCUMENT_TOKEN_TO_BE_REPLACED

November 2022 sees the Arab world firmly in the spotlight with the COP27 in Egypt and the FIFA World Cup in Qatar. Public trust in MENA governments is weak, thanks to their ... END_OF_DOCUMENT_TOKEN_TO_BE_REPLACED

Palme d’Or winner "Boy from Heaven" is a classic crossover film in which cultural elements are mixed together in haphazard and random fashion. Shady Lewis Botros bemoans the ... END_OF_DOCUMENT_TOKEN_TO_BE_REPLACED

COP27 in Sharm el-Sheikh is turning into a PR disaster for Egypt’s military regime. Instead of praise for the host, the news is full of solidarity for imprisoned activist Alaa ... END_OF_DOCUMENT_TOKEN_TO_BE_REPLACED

END_OF_DOCUMENT_TOKEN_TO_BE_REPLACED
Social media
and networks
Subscribe to our
newsletter