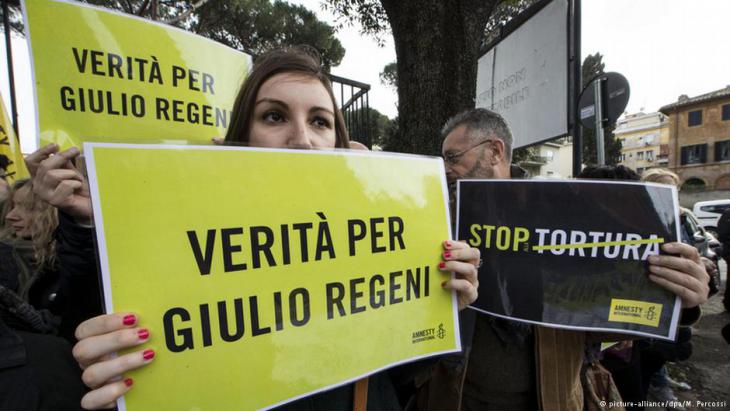 Egypt′s repression of academics and journalists
The Regeni murder fallout

The murder of an Italian academic one year ago was yet another tragic reminder that it is barely possible to conduct independent research in Egypt these days. But German and European policies on Egypt rely on scholarly analyses, say Stephan Roll and Lars Brozus

One year ago, on 25 January 2016, the academic Giulio Regeni disappeared in Cairo, his body was found on 3 February. The autopsy showed that the 28-year-old had been tortured for days.

To this day, the crime has not been explained and the perpetrators have not been caught, but the evidence is damning: Regeni disappeared on the 5th anniversary of the 2011 uprising, when there was a particularly robust security presence in downtown Cairo; Egyptian human rights activists say the torture methods bore all the hallmarks of the security forces and the police tried to cover up the circumstances of the disappearance, initially blaming the death on a car accident – all of which suggests that Regeni was a victim of the Egyptian security apparatus.

Regeni had been under secret police surveillance before his death. His research appeared suspect – the social scientist was investigating the scope for free trade union organisations in Egypt, a highly sensitive issue in a repressive nation. But it is unlikely that the killing was a targeted order from high-ranking political echelons.

Regeni was probably the victim of everyday excessive police brutality in Egypt. The independent human rights organisation Al Nadeem Center for Rehabilitation of Victims of Violence documented – for the first five months of 2016 alone – 349 instances of torture, of which at least 12 ended fatally. Human Rights Watch und Amnesty International make repeated reference to the regular use of torture in Egyptian police custody and bemoan the dramatic increase in abductions by security forces. The German government is also concerned about levels of torture and disappearances.

It is not only the individual human rights infringements that are problematic, but also how the leadership in Cairo deals with them. Instead of solving the cases and calling those responsible to account, the regime largely denies the incidents or explains them with abstruse conspiracy theories. In the case of Regeni for example, President Sisi suggested that "evil people" had been trying to poison good relations between Egypt and Italy. 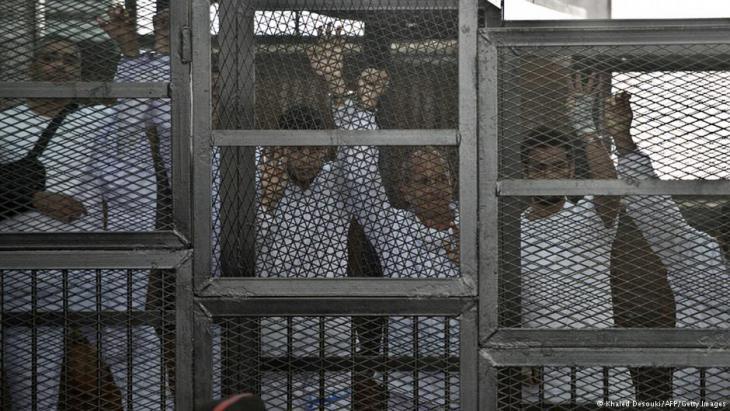 Press effectively gagged: the Committee to Protect Journalists denounces Egypt as one of the "biggest jailers" of journalists worldwide. On the current World Press Freedom Index compiled by Reporters Without Borders the country is ranked 159th out of 180

In doing this, the regime stokes the already widespread paranoia within the population, thereby detracting from its own failures. But first and foremost it sends a clear signal: even if police brutality is not conducted under official order, in today's Egypt, no one can and should feel safe. The same applies to members of the Islamist opposition, as well as critical civil society actors, among them journalists and academics – even those with a foreign passport.

A dearth of reliable information from Egypt

The message is getting through. Already since the military putsch of 2013, any academic work in Egypt has become increasingly difficult. Initially, this impacted first and foremost on the work of Egyptian academics. Travel and publication restrictions have been an everyday fact of life ever since; financing possibilities for independent research have also become more restrictive, also and particularly by international partners.

International academics are also being forced to significantly scale back their activities in Egypt. Academic research has never been easy in Egypt, with researchers always running the risk of being discredited as a spy. But since the murder of Regeni, many experts are no longer even entering the country out of fears for their own safety. The uncertainty surrounding the unexplained fate of the Italian national has led to a situation where fewer and fewer analyses are being conducted that are based on locally-gathered research.

Journalists too are barely able to publish reliable information. Most state and private media toe the regime line and disseminate its propaganda. The few remaining critical journalists are silenced and thrown in jail for the alleged spread of misinformation. The Committee to Protect Journalists denounces Egypt as one of the "biggest jailers" of journalists worldwide. On the current World Press Freedom Index compiled by Reporters Without Borders the country is ranked 159th out of 180. 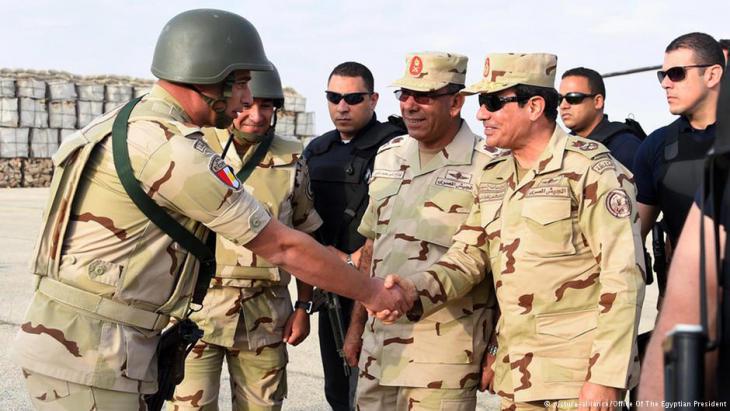 Billions in aid for Egypt′s military? With an eye to reducing the number of refugees coming to Europe, Germany′s Chancellor Merkel is seeking levels of co-operation with the North African transit lands on a par with her refugee deal with Turkey. "Agreements, such as the one we have with Turkey, must be struck, in particular with Egypt, but also with other African countries," Merkel is quoted as saying last September. German opposition parties, such as the Greens, have countered that the military holds sway in Egypt, determining where the money flows. It is therefore paramount prior to any deal to establish just how the EU means to ensure that funds end up being used to the benefit of refugees

The repressive approach of the Sisi regime is also propped up by the passivity of western governments. As a result of considerable political pressure at home, Italy did pull its ambassador out of Cairo over the Regeni case – but the murder had no further consequences, no impact, for instance, on the flourishing economic relations between the two nations.

Only the EU parliament issued a resolution sharply condemning the Sisi government's failure to conduct a proper investigation into the death of the PhD student. The resolution also criticised EU member states that continue to strive for a normalisation of relations with Egypt, despite reports of serious human rights violations there. Co-operation is actually being expanded: while more and more researchers avoid the country, western politicians are keen to visit Egypt.

In the Regeni case, western governments should not only be interested in answers out of human rights considerations and efforts to contain the repression of academics and journalists.

Foreign policy is based on a multitude of information and analyses. These come from various sources: embassies, intelligence services, from academia and the media. The quality of the information as well as the analysis must meet high standards – especially when it concerns the decision of whether, and how, to work with repressive regimes.

As valuable and relevant as embassy reports and intelligence service insights may be, they cannot match the possibilities of academic study and independent media coverage. In particular for the examination of structural changes in the economy, state and society, research is indispensable – without it, a realistic appraisal of the situation is practically impossible.

In the end, a bona fide foreign policy, or one based on wishful thinking, runs the risk of missing its targets and primarily serving the interests of authoritarian rulers.

Lars Brozus is a researcher at the German Institute for International and Security Affairs (SWP) focusing among other things on authoritarian regimes. Stephan Roll is a researcher on Egypt, also at the SWP. The institute advises parliament and the government in all questions of foreign and security policy.

Alaa Abd el-Fattah, arguably Egypt’s most prominent democracy activist, has just been handed another lengthy prison sentence. Despite this, a book of his writing has recently been ... END_OF_DOCUMENT_TOKEN_TO_BE_REPLACED

People in Arab countries have been talking more openly about sex and sexuality for some time now, especially on social media. And for the first time ever, they have the vocabulary ... END_OF_DOCUMENT_TOKEN_TO_BE_REPLACED

A prominent rights group in Egypt, the Arabic Network for Human Rights, is ending operations just as the country braces for a controversial NGO law. Is this the beginning of the ... END_OF_DOCUMENT_TOKEN_TO_BE_REPLACED

Moncef Marzouki was Tunisia's first democratically elected president after the fall of dictator Ben Ali. Today he is the most prominent critic of increasingly counter- ... END_OF_DOCUMENT_TOKEN_TO_BE_REPLACED

Asef Bayat, professor of Sociology at the University of Illinois, Urbana-Champaign, has been studying revolutions and how they affect people since 1979. In his recent book, " ... END_OF_DOCUMENT_TOKEN_TO_BE_REPLACED

Every year in December, the team at Qantara.de takes a look back at the articles that proved most popular with our readers. This year is no different. Here is a run-down of the ... END_OF_DOCUMENT_TOKEN_TO_BE_REPLACED
Author:
Stephan Roll und Lars Brozus
Date:
Mail:
Send via mail

END_OF_DOCUMENT_TOKEN_TO_BE_REPLACED
Social media
and networks
Subscribe to our
newsletter