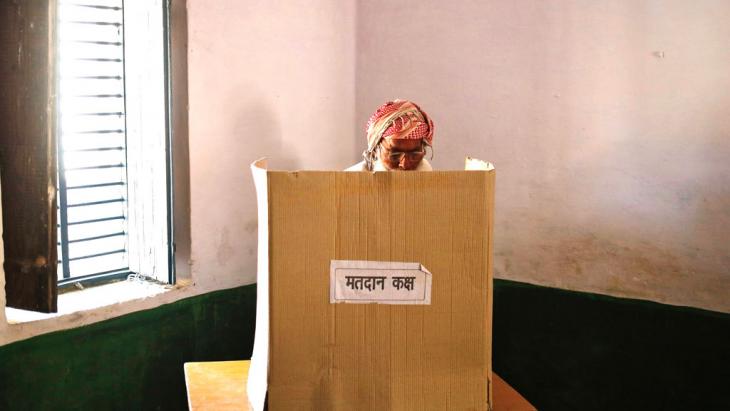 With elections now underway in India, the Muslim vote is of vital importance to the outcome. The country's single largest religious minority makes up 14 per cent of India's population of more than 1.2 billion people. By Samrah Fatima

The ruling alliance UPA (United Progressive Alliance) led by the Congress party, the main opposition NDA (National Democratic Alliance) led by Hindu nationalist Bhartiya Janata Party (BJP) and the regional outfits all have one thing in common: they understand that the Muslim community will have a considerable impact on their electoral fortunes. Muslim voters will play a decisive role in about 100 of the 543 constituencies set to return MPs to the Indian Parliament. In some constituencies, Muslims make up some 40 per cent of voters.

Although the Congress party has traditionally enjoyed the loyalty of this minority community, its support base among Muslims has eroded significantly in the past twenty years in the face of gains by many of the regional parties. According to government reports, Muslims remain one of the most economically disadvantaged communities in India. As a result, many of them now feel that successive Congress-led governments have failed them. But simply deserting the Congress party for the opposition BJP is hardly an option since Muslims deeply distrust the Hindu-nationalist BJP.

The main opposition BJP's prime ministerial candidate, Narendra Modi, is being hyped as the man destined to solve India's economic problems. But that doesn't seem to cut much ice with Muslim voters. "When Muslims go to vote, their primary preference will be for a party that is in a position to defeat the BJP in that constituency," says Sanjay Kumar, a leading expert on elections in India.

Deep grudges are held for a reason. After all, Narendra Modi has been accused of being responsible for communal riots in Gujarat in 2002 in which over 900 people were killed, most of whom were Muslims. The BJP has always denied that Modi, the chief minister of Gujarat since 2001, had any role in fomenting the violence. 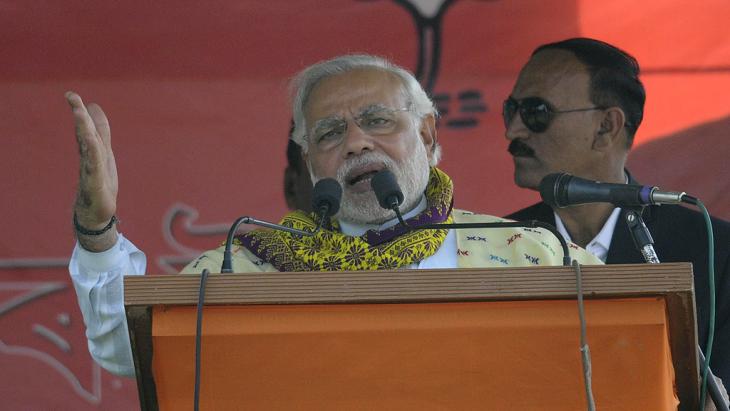 The main opposition BJP's prime ministerial candidate, Narendra Modi, is seen by many as the favourite to become India's next PM. Whether he will receive the widespread support of Muslim voters, however, is a moot point

Sanjay Kumar points out that Muslims' concerns about the BJP go back even further. The destruction of the Babri Mosque in 1992 by thousands of right-wing Hindu activists, including BJP supporters, traumatised many Muslims. Over 2,000 Muslims lost their lives in the riots that followed the demolition of the mosque. Many key BJP leaders are still facing trial for their alleged role in the incident in the city of Ayodhya, which many Hindus believe to be the mythological birth place of Lord Rama, one of the most popular figures in Hinduism.

Nadeem is a Muslim businessman in the state of Uttar Pradesh where Muslims make up about 25 per cent of the state's population. He suffered heavy financial losses during the 1992 riots in Kanpur. His views are typical of those expressed by many Muslims. In an unforgiving tone he says: "A businessman can never forget his loss. The wounds (of the past) are as raw as they were before."

BJP vice-president and spokesperson Mukhtar Abbas Naqvi, one of the few Muslims represented in the BJP leadership, argues that the BJP's poor reputation among Muslims is undeserved: "The BJP's image has been tarnished by its political opponents through malicious conspiracy," he claims. From his perspective, there has been a positive shift in the mindsets of many Muslims over the past two decades.

But that assertion does not appear very convincing in light of the events that took place last September. At the time, communal violence between Hindus und Muslims erupted in Muzaffarnagar, a district in the northern state of Uttar Pradesh. The rioting claimed at least 65 lives and over 50,000 people, mostly Muslims, were displaced. BJP leader Modi has refused to condemn the violence and avoids any references to religiously motivated rioting in his campaign speeches. 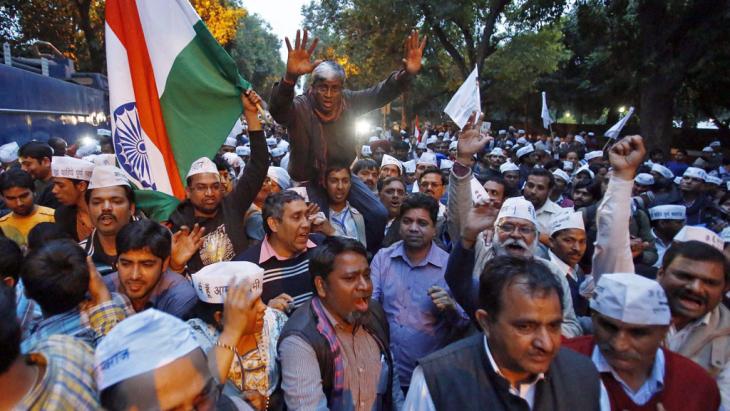 Supporters of the Aam Aadmi Party (AAP) shout slogans during a protest outside the headquarters of the Bharatiya Janata Party (BJP) in New Delhi on 5 March 2014. Samrah Fatima writes that because many Muslims feel led down by successive Congress-led governments, it is likely that they will vote not for the BJP and Congress, but for other, regional parties such as the Samajwadi Party, the Bahujan Samaj Party, the Rashtriya Janta Dal and the recently created Aam Aadmi (Common Man) Party

With Muslims unlikely to vote for the BJP in great numbers, the question remains as to whom they will vote for. Amitabh Kundu, a professor at the New Delhi-based Jawaharlal Nehru University and chairman of a government committee which has evaluated the situation of Muslims in India said: "Given the very limited performance of the present government in the last five to six years in the context of improving the situation of the Muslims in the country, I feel there will be some level of dissatisfaction because the Muslims certainly expected a lot."

The Congress-led government's failure to adequately address the aspirations of Muslims is likely to drive them into the arms of other regional parties such as the Samajwadi Party, the Bahujan Samaj Party, the Rashtriya Janta Dal and the recently created new anti-corruption Aam Aadmi (Common Man) Party.

Indeed the emergence of the AAP has given an interesting twist to these parliamentary elections. The polls suggest that it may be an alternative to both Congress and the BJP in various constituencies.

AAP performed remarkably well in the recent Delhi State elections and prevented BJP from winning a majority. In view of this fact, Sanjay Kumar believes that Muslims will only vote for Congress in those areas where there are no other strong regional parties competing against the BJP.

With elections now in full swing, there is a touch of hopelessness in Nadeem's voice as he says: "Nobody has ever done anything for Muslims in this country since independence. Everyone promises the same. It wouldn't surprise me if the new government also forgot that Muslims are also part of this country."

With that kind of sentiment in their hearts, many Muslims will go to the ballot box hoping that whatever party they choose will be somehow capable of preventing Hindi-nationalist Narendra Modi from becoming India's next prime minister.

The USA and NATO plan to withdraw from Afghanistan by September. The operation is risky, the outcome uncertain. Many Afghans fear civil war. The quake on the Hindu Kush will also ... END_OF_DOCUMENT_TOKEN_TO_BE_REPLACED

Freedom of the press is the mortar that binds together a free society. If Indian Prime Minister Narendra Modi’s efforts to de-institutionalise what used to be a dynamic and ... END_OF_DOCUMENT_TOKEN_TO_BE_REPLACED

Surging coronavirus cases in many parts of the world have overshadowed the start of this year's Muslim holy month of Ramadan, with festivities once again curtailed by contagion ... END_OF_DOCUMENT_TOKEN_TO_BE_REPLACED

As Qatar prepares to host the 2022 FIFA World Cup, the country has come under fire for its treatment of migrant workers, with some nations calling for a boycott of the contest. ... END_OF_DOCUMENT_TOKEN_TO_BE_REPLACED

The farmers' protests in India show no signs of abating – despite repressive measures. Government attempts to stigmatise the farmers have only prompted sections of the urban ... END_OF_DOCUMENT_TOKEN_TO_BE_REPLACED

Fanna-fi-Allah is the West's most renowned Qawwali ensemble. It stands out not only for its strong stage presence, but also for its commitment to preserving the centuries-old ... END_OF_DOCUMENT_TOKEN_TO_BE_REPLACED
Author:
Samrah Fatima
Date:
Mail:
Send via mail

END_OF_DOCUMENT_TOKEN_TO_BE_REPLACED
Social media
and networks
Subscribe to our
newsletter