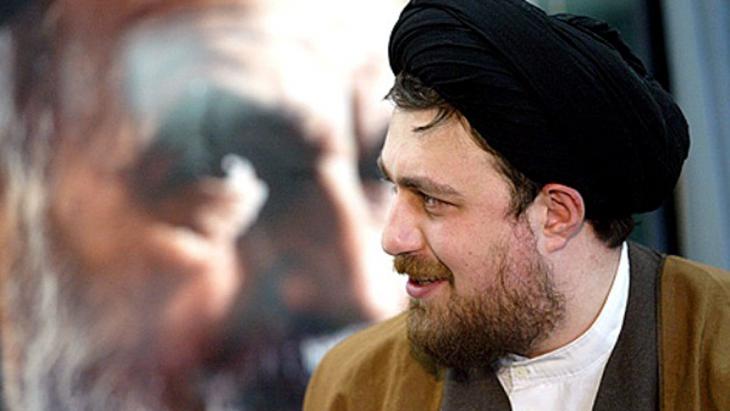 Even Khomeini can be disqualified

The moderate cleric Hassan Khomeini has been excluded as a candidate for the Assembly of Experts in Iran, even though he is the grandson of the nation's founder. This example shows why it so difficult for the moderates and reformists to assert themselves against the country's conservative establishment. By Ulrich von Schwerin

Ayatollah Ruhollah Khomeini is something like the patron saint of Iran. In the official discourse, the founder of the Islamic Republic is referred to as "Imam", a title that associates him with the Twelve Imams of Shia Islam. His mausoleum in the southern part of Tehran vies in grandeur and magnificence with the tomb of Imam Hussein in Karbala or that of Imam Reza in Mashhad. When hundreds of thousands of people make the pilgrimage to his mausoleum in early June to commemorate the day of his death, one might very well get the impression that a saint is being venerated.

This makes it all the more surprising that his eldest grandson, Hassan Khomeini, has not been permitted to run for election to the Assembly of Experts, which will take place in conjunction with the parliamentary elections on 26 February. He was excluded alongside many other moderate and reformist candidates. In the Shia faith, highest honours are accorded not only to the imams but also to their descendants. Mustn't we then assume that the family of the "Imam" Khomeini would also enjoy a certain level of deference?

Hassan Khomeini's name has however not offered him any advantages. The 43-year-old cleric belongs to the camp of President Hassan Rouhani and former President Akbar Hashemi Rafsanjani. "It was hoped that Hassan Khomeini's background would lend the pragmatic centrist wing surrounding Rouhani and Rafsanjani a degree of ideological and religious legitimacy," says Ali Fathollah-Nejad, an expert on Iran who sits on the German Council on Foreign Relations (dgap). 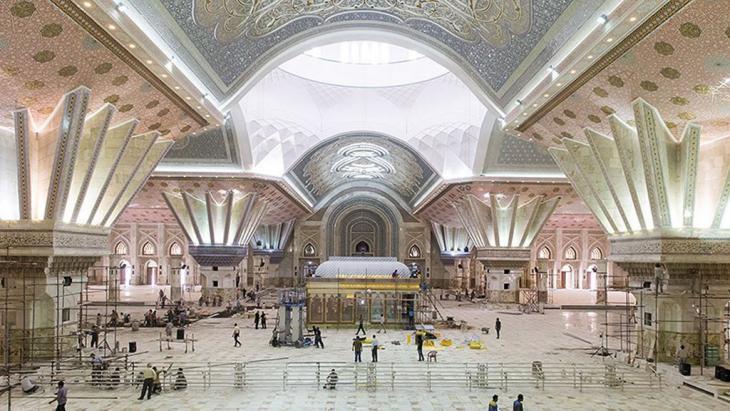 On a par with the tomb of Imam Hussein in Karbala or that of Imam Reza in Mashhad in terms of grandeur and magnificence: when hundreds of thousands of people make the pilgrimage to his mausoleum in early June to commemorate the day of his death, one can very well get the impression that a saint is being venerated

Joined by the young Khomeini, Rouhani and Rafsanjani aspired to gain control of the Assembly of Experts. The council of 88 high members of the clergy is so important because it chooses the Supreme Leader. As the incumbent Ayatollah Ali Khamenei is already 76 years old and no longer in the best of health, the choice of a successor may very well take place during the eight-year term of the newly elected Assembly of Experts.

The Guardian Council has however dashed any hopes of Hassan Khomeini being elected. Although Khomeini junior was not formally disqualified, he became officially ineligible when he was not invited to take the requisite written exam, so that the council claimed not to have the necessary information at hand to decide on his qualification.

Of course, nobody in Iran believes this official account. It is no secret that the Guardian Council, dominated by conservative clerics, carefully examines not only candidates' personal suitability and religious qualifications but also their loyalty to the system. From the council's perspective, the system is synonymous with Supreme Leader Khamenei, so it feels justified in regularly excluding his opponents and critics from elections.

Suppressing ″enemies of the system″

After the revolution in 1979, monarchists, communists, liberals and the People's Mujahedin were at first regarded as the enemies, but later the term was extended to religious nationalists, left-wing Islamists and finally to reformers. Ever since the protests against the controversial re-election of President Mahmoud Ahmadinejad in 2009, the conservatives consider all advocates of political reform enemies of the system. 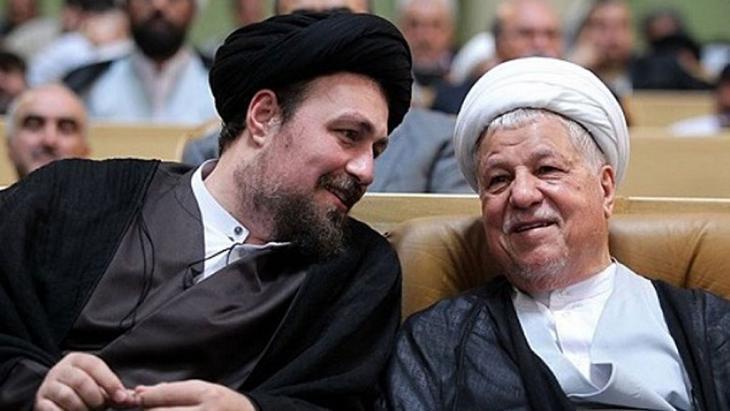 Joined by the young Khomeini, Rouhani and Rafsanjani aspired to gain control of the Assembly of Experts. The exclusion of Khomeini by the Guardian Council is a blow for the reformers. Sven thousand of a total of 12,000 candidates for the parliamentary elections had already been turned down by mid-January. This was openly criticised by Rouhani. Khamenei on the other hand, has insisted that all candidates for the Assembly of Experts be subjected to scrutiny

And yet, the fact that this prejudice also applies to Hassan Khomeini still comes as a surprise. As the eldest son of Ahmad Khomeini, he is today head of the Khomeini clan. Although Ahmad was only the second oldest son of the nation's founder, his firstborn Mostafa died two years before the revolution – allegedly murdered by the Shah's secret service. Mostafa's only son, Hussein, decidedly rejects the current system.

Hassan was therefore entrusted with managing his grandfather's mausoleum and directing the institute responsible for publishing his writings. He long kept out of politics, devoting his time to managing his grandfather's heritage and to his religious studies. Today, he holds the rank of Hojatoleslam, an authority on Islam and teaches dars-e kharej in the seminaries of Qom, the highest level of Islamic jurisprudence.

Support for the "green movement"

Hassan Khomeini however broke with his neutral stance after the controversial elections of 2009 and proceeded to endorse the reformers Mir Hossein Mussavi and Mehdi Karrubi. Conservative hardliners reacted with fierce hostility, going so far as to shout "death to the hypocrites" and "death to the enemies of the regime" at the festivities for the anniversary of his grandfather's death at his mausoleum in June 2010.

"Can they really do that?" people wondered at the time, puzzled. Although the incident drew sharp criticism from the reformers, Khamenei didn't breathe a word about the catcalls when he took the podium shortly after Hassan Khomeini. When Khomeini then announced his candidacy for the Assembly of Experts this January, he was again harshly attacked by hardliners and even his religious credentials were called into question.

Hassan Khomeini reassured listeners that all he wanted to do was fulfil his grandfather's commandment "to defend the principles of the Islamic Republic to the end". In response, the editor-in-chief of the ultra-conservative newspaper "Kayhan", Hossein Shariatmadari, went so far as to write that not Hassan Khomeini but the cleric Nimr al-Nimr, who was executed in early January in Saudi Arabia, was "the real grandson of Imam Khomeini". 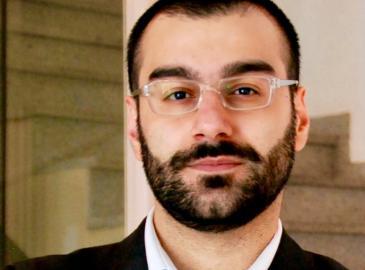 "The hardliners are no longer dependent on the Khomeini clan. Many clerics now sympathise with the reformists, but the real power lies with the Supreme Leader Khamenei and the Revolutionary Guards," says the Iran expert Fathollah-Nejad

"The hardliners are no longer dependent on the Khomeini clan," says the Iran expert Fathollah-Nejad. And the Shia clergy is no longer the centre of power anymore in today's Iran. "Many clerics now sympathise with the reformists, but the real power lies with the Supreme Leader Khamenei and the Revolutionary Guards." Khamenei can therefore afford to disqualify the grandson of Khomeini – no matter whether his arguments are convincing.

The case shows that the Khomeini name holds less and less weight in the country's politics. All of the political camps continue to invoke the nation's founder to legitimise their policies, trying to present themselves as his true heirs. But it has long been abundantly clear that they are all merely paying lip service to statements that fit their own narratives. Ultimately, the whole discourse on Khomeini, the revolution and Islam cannot obscure the fact that it really all comes down to power. And the one who has the power makes the rules – even without legitimacy.

It's thus little use for Hassan Khomeini and other disqualified candidates to try to demonstrate that they have the necessary religious qualifications. Nor will it help them to show that their demands for more participation, pluralism and civil rights conform with the constitution.

The conflict surrounding the 2009 elections already showed that the reformers need more than just political legitimacy. As long as the conservatives are in power, they can shut out the moderates and reformers at will – and that's exactly what they're doing.

No other Western poet was arguably so well-versed in the Koran or so fascinated by Islam as Germany's national hero, Goethe. In a new publication that examines all Goethe's ... END_OF_DOCUMENT_TOKEN_TO_BE_REPLACED

A deluge of books, movies, series and cover stories: ever since the events of 9/11, the West has seemed almost manically preoccupied with Islam. Yet this has rarely led to deeper ... END_OF_DOCUMENT_TOKEN_TO_BE_REPLACED

Two decades after the attacks of 11 September 2001, the West faces the shattered debris of its failure – not only in Afghanistan, but also in Iraq, Syria, Libya and Yemen. What ... END_OF_DOCUMENT_TOKEN_TO_BE_REPLACED

Following the Taliban's power grab, members of the Hazara minority fear they will be targeted. Those who can, escape. Others have joined the armed opposition. But for many, there ... END_OF_DOCUMENT_TOKEN_TO_BE_REPLACED

One thing the regime in Tehran has in common with the Taliban is that they both dislike the USA. But apart from that, Tehran has a number of issues with its neighbour, writes ... END_OF_DOCUMENT_TOKEN_TO_BE_REPLACED

Although the United States clearly could have done a better job of managing its departure from Afghanistan, the tragedy playing out this month has been 20 years in the making. ... END_OF_DOCUMENT_TOKEN_TO_BE_REPLACED

Comments for this article: Even Khomeini can be disqualified

Why Khomeini was rejected

The article describes the situation of power in Iran but somehow forgets to mention the reasons behind all these events.To put it in a nutshell: Khamenei and his lot don't approve of tolerance, peace and development of the society. They hate Sufism. Hassan Khomeini seems to appreciate the values of the Sufis, he lectures on Hafis, Rumi, Sa'adi. Khamenei's pack, especially the grim men of Ammariyon who are Pasdarans elite ideologues, believe in destruction and bloodshed. Their ideology is based on teachings by Ahmad Fardid. It is an armaggedonist world view, mixing shiite eschatology with Fardids ideas. The men behind this ideology are in favor of total destruction of the world in order to build up a new civilization afterwards. This new civilization will be ruled by the Hidden Imam and will be based on absolute obedience towards his orders. Hassan Khomeini does not agree to this. That is the plain reason for not admitting him...We should be very vigilant what will happen next in Iran..

END_OF_DOCUMENT_TOKEN_TO_BE_REPLACED
Social media
and networks
Subscribe to our
newsletter