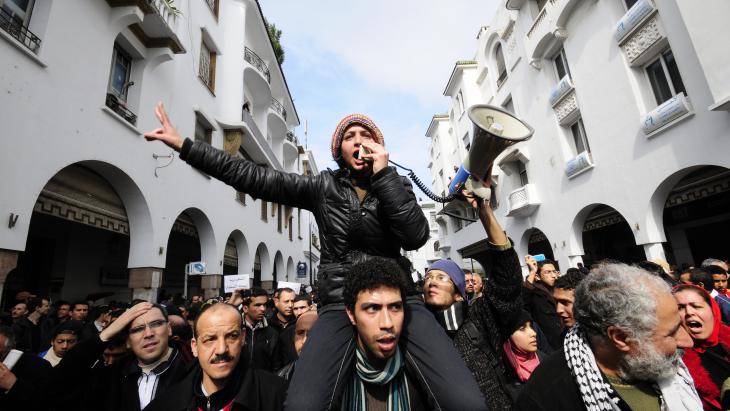 Morocco′s Party for Justice and Development (PJD) faces a stiff confidence test on 7 October when parliamentary elections are held for the second time since constitutional reforms were adopted in 2011. Moreover, rumours that the Makhzen is finished with the PJD means that the main opposition – the Party for Authenticity and Modernity (PAM) – poses a serious challenge at the polls. Analysis by Matthew Greene

The PJD captured a comfortable plurality of the 2011 vote thanks to a grassroots campaign pushing for greater transparency in government. The party committed to ″fight corruption and tyranny″, an issue cited by the February 20 movement as a key grievance during the nation′s Arab Spring protests. While Benkirane maintains that the PJD remains the ″guardian of transparency and honesty″ and the ″most democratic″ of Morocco′s political parties, the party has not met its mandate. This year′s campaign slogan ″vote to continue reform″ is a far shift in the PJD′s discourse from only 5 years ago.

The PJD instead pursued difficult and politically risky economic and social reforms to reduce Morocco′s budgetary deficits. The PJD boasts reducing the country′s public debt from 7.2% of GDP in 2011 to 3.5% today as a major accomplishment. However, the achievement was not reached without hurting the purchasing power of ordinary citizens.

The government′s approval of a pension reform package raising the age of retirement from 60 to 63 years and increasing contributions led to a nationwide labour strike attempting to block the bill. Meanwhile, Parliament passed measures to end fuel subsidies beginning in 2015 and freeze public-sector employment, in addition to cutting the state compensation fund.

Benkirane and the PJD insist that the controversial fiscal reforms are necessary for the future of Morocco′s economic and social progress. They consider the glowing approval coming from international lenders and increases in foreign direct investment and foreign currency reserves are indications that the country′s accounts are on the right course. However, many Moroccans struggle to see how accolades from the World Bank and balanced books are translating into improved standards of living, especially as everyday expenses including fuel, electricity and sugar rise. 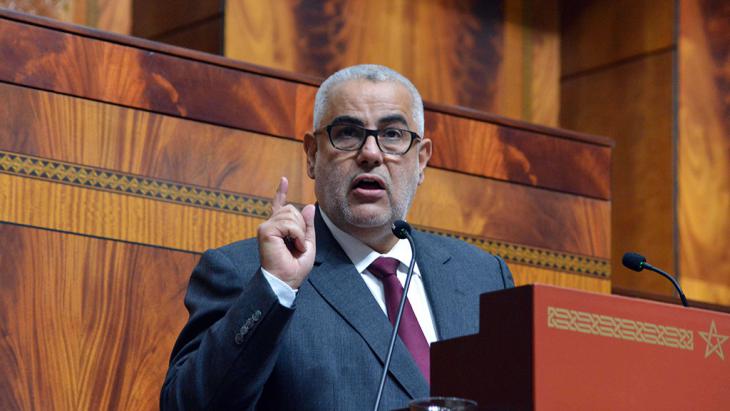 A shortfall in expectations: the PJD′s one shining achievement has been to reduce Morocco′s budgetary deficits from 7.2% of GDP in 2011 to its current level of 3.5%. Many Moroccans, however, fail to see how accolades from the World Bank and balanced books are translating into improved standards of living, especially as everyday expenses including fuel, electricity and sugar continue to rise

According to Mohamed Daadaoui, a professor of Political Science at Oklahoma State, the extent to which austerity measures test the PJD′s electoral appeal remains to be seen. In his view, the party still possesses great organisational capacity, as evidenced by the number of municipal and regional seats it holds tripling over the past 6 years. ″The PJD is restoring some popular confidence in the ability of political parties to provide real solutions to societal problems, especially among the marginalised and alienated segments of the population in Morocco.″

The opposition seeks to oust the Islamists by exploiting the public′s anxiety over the state of the economy. PAM Secretary General Ilyas Elomari stated in August that ″it will lead the country to catastrophe″ if the status quo of the standing government is not challenged. His claim is bolstered by a campaign environment shaping up to favour his party, which some Moroccan political analysts see as the work of an influential royal hand. ″PAM is much more aligned with the general aims and goals of the regime, so there is a certain preference for them in the upper halls of power,″ says Daadaoui, but adds that the regime′s interests wouldn′t be served with a PJD victory either.

Elomari and his party are promising to create 150,000 new jobs every year and increase public investment if elected. They have also framed PAM as a progressive alternative to the PJD by proposing to eliminate the Ministry of Communications in order to alleviate concerns over a deteriorating freedom of the press. Elomari has also proven himself as an outspoken proponent for decriminalising marijuana consumption and bringing cannabis production out from the shadows, especially in his base in the Rif mountains where inequality and unemployment rates are among Morocco′s highest.

PAM has mostly abstained from entering a moral contest with the PJD, but a recent flurry of scandals involving PJD members including a murky property acquisition, a drug possession arrest and a public sex escapade have invited scrutiny of the social conservatives. In a damage limitation exercise, the PJD has now dropped its candidate for the Marrakesh constituency, Hammad Kabbaj, a Salafist preacher with a history of making anti-Semitic comments. In recent weeks Elomari had pounced on his rival′s public relations crisis, vowing to ″liberate″ Morocco from the PJD in order to save the country from the Islamists. 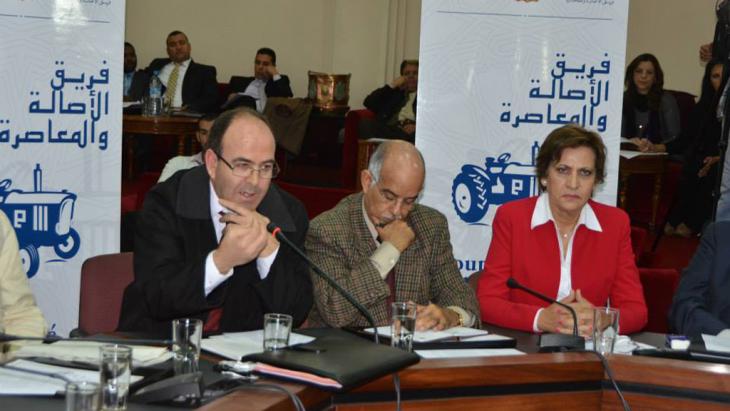 PAM – the progressive alternative: the opposition is proposing to eliminate the Ministry of Communications in order to alleviate concerns over a deteriorating freedom of the press. They also support the decriminalisation of marijuana consumption and cannabis production – a bid to win votes among Morocco′s disadvantaged rural population

However, the PJD will count on voters to see through PAM′s posturing as a party of change. Benkirane continues to be a more popular figure than other party leaders including Elomari and continues to enjoy a solid support base in urban areas and among youth. ″The government has made positive changes under Benkirane. It has not been a perfect term, and I′m disappointed that little was done for education and health care, but overall he has done a decent job,″ says Rania, 28, a graduate student from Tangier. Similarly, Ibrahim, 37, from Casablanca, will vote PJD though he prefers the leftist Socialist Union Party. ″I really want to vote PSU, but it seems like a lost cause as PAM or PJD will win, so I′m voting PJD because of Benkirane.″

If re-elected, the Benkirane and his party will have yet again demonstrated the virtue of their ground campaigning. In last year′s municipal elections the PJD captured the highest percent of votes cast including coups in Fes and Agadir, the traditional home bases of two major opposition camps, the Istiqlal Party and the Socialist Union of Popular Forces.

The 2011 elections demonstrated that the Makhzen was listening to the voices in the street. A boost in voter turnout reflected the public′s heightened enthusiasm for the new reforms. But 5 years later, there is little left of the February 20 movement and momentum from the Arab Spring has slowed to a halt. All political parties have attempted to reverse this inertia by courting activists and other fresh voices into party politics, but without great success. On the eve of an election where most power continues to rest firmly in the hands of the Makhzen, Morocco′s fledgling democracy looks set to remain in transition.

The façade of a twelfth-century cathedral is an unlikely place to find a message in Arabic script carved in stone, but so it is in the Portuguese city of Coimbra. Marta Vidal ... END_OF_DOCUMENT_TOKEN_TO_BE_REPLACED

The country's national election on 8 September will likely bring new government. But neither experts nor locals expect it to bring long-promised change, writes Cathrin Schaer END_OF_DOCUMENT_TOKEN_TO_BE_REPLACED

The coronavirus pandemic has turned lives upside down all over the world. In the Middle Ages, however, people lived with epidemics all the time. The best and most famous ... END_OF_DOCUMENT_TOKEN_TO_BE_REPLACED

A bird's eye view of eight hundred years of history: Brian A. Catlos tells the story of Al-Andalus in the style of a streaming series and deconstructs the myths of the Reconquista ... END_OF_DOCUMENT_TOKEN_TO_BE_REPLACED

In his new book, "Tangier/Gibraltar- A Tale of one city: An Ethnography", Dieter Haller looks at how shared experiences and practices have created a unique relationship and a ... END_OF_DOCUMENT_TOKEN_TO_BE_REPLACED

While Europe and North America experience something like a return to normality with relatively high vaccination provision and take-up rates, the rest of the world is struggling to ... END_OF_DOCUMENT_TOKEN_TO_BE_REPLACED
Author:
Matthew Greene
Date:
Mail:
Send via mail

END_OF_DOCUMENT_TOKEN_TO_BE_REPLACED
Social media
and networks
Subscribe to our
newsletter