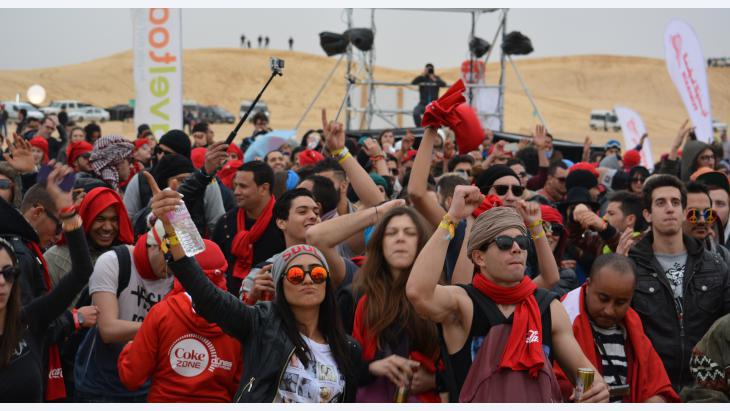 Beats and bass in the desert

Young people from Tunisia and beyond recently descended on the desert where George Lucas filmed parts of his "Star Wars" films to celebrate North Africa's biggest festival of electronic music. The government actively supported the event, and it looked as if the festival was going to be a great success, but then the bad weather kicked in. Jannis Hagmann reports from Nefta

Yan Degorce's cigarette is all twisted up. He's been passing it back and forth between his hands for so long that the tobacco has started to fall out. There's no time to smoke. The "New York Times" is there, and so is the BBC. Reporters from Italy, Germany and Hungary have also come to Nefta to report on three days of beats and bass in the desert. The whole world is set to get to know "Les Dunes Electroniques", North Africa's largest electronic music festival.

"There are countless festivals in Europe, so why not here?" says Degorce in response to the journalists who have gathered around him. His French-Tunisian team has put together the festival for the second time. "We went to the Tourism Minister and said: you have a problem with tourism in the south of the country, and we have an idea." 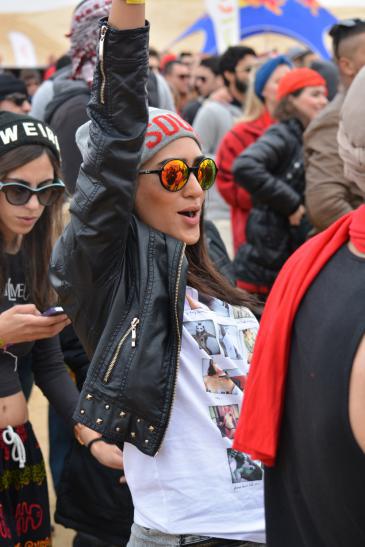 The ministry liked what it heard. After all, few tourists make their way to southern Tunisia. Eight out of ten visitors to Tunisia head to the sprawling hotel complexes along the Mediterranean coast. Like no other country in the region, Tunisia stands for cheap beach holidays with guaranteed sunshine. "If they come to the festival first," says Degorce, "they may stay longer in the south or come back another time."

Two massive speaker towers rise up from the festival site, which is surrounded by sand dunes as high as hills. The small desert huts behind the stage look like little igloos made of sand. It's here that George Lucas filmed his legendary Star Wars films – Episodes I and II – during the 1990s. There's even a remnant of the original film set: a run-down but freshly painted grey rocket. The festival organisers riffed on the Star Wars theme, calling their event "Dunes Electroniques - Episode II". In Mos Espa, Darth Vader's hometown on the fictional planet Tatooine, the first DJs are getting ready to take the stage.

It's no surprise that some Star Wars fans are among the festival-goers. A Princess Lea with a pale face and tightly braided hair smiles into a camera, while a Darth Vader poses for reporters. Their costumes have made them a favourite for photographers.

More than 250 journalists have travelled here for the event, says Degorce. They were invited by festival organisers. But Tunisia's Tourism Ministry didn't hold back either: under the motto "The new lifestyle in southern Tunisia", the tourism office invited 15 reporters from Germany alone. An additional 60 came from Russia, Sweden, the UK and Eastern Europe. The intention is that "Les Dunes Electroniques" will attract guests from Europe in February, when the festival season in Europe has long since ended and ticket sales for the next one have hardly begun.

Supporting the "Dunists", as the electro fans like to call themselves, is part of the Tunisian government's new tourism strategy. "Our goal is diversification," says Tourism Minister Salma Elloumi Rekik. That means moving away from the beaches and deeper into the hinterland. She says the country's south needs further development in this respect. Along with the various Star Wars props and backdrops scattered around the region, the festival is seen as a motor that could bring tourists into the country's interior. 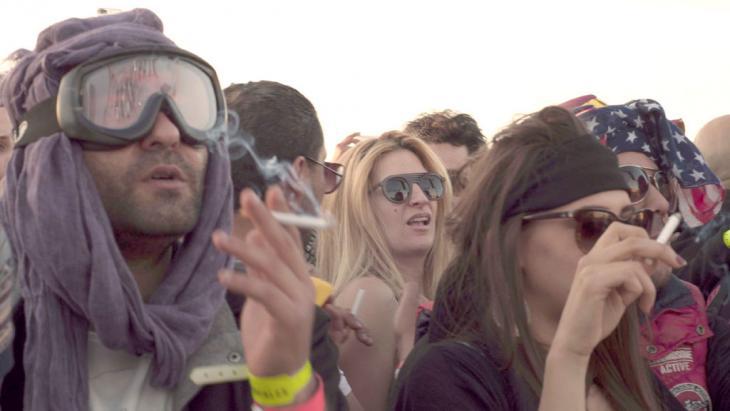 The sound of electronic music in a sea of desert sand: Yan Degorce and his French-Tunisian team put together the festival for the second this time year. The 2014 festival was a huge success: more than 10,000 revellers got together and danced

Beacon in the Arab world

While civil wars continue to divide Libya and Syria, and Egypt's hopes for change have given way to a new dictatorship, Tunisia is using the electro festival to position itself as a modern, cosmopolitan country. The message is: techno, not terror. "After the revolution, people want to party," says one of the event's hosts into the reporters' microphones. "The electronic dunes are a symbol of the new Tunisia."

Many consider the country a beacon in the Arab World. It is often said that if Tunisia's new start fails, democratisation will falter throughout the region. But that doesn't seem likely. Despite the threats the country faces from terrorists and its sensitive border region with Libya, Tunisia's parliament and president were freely elected. A coalition government was confirmed in February for five years. And the Islamists of the Ennahda Party, who are included in the government by way of a ministerial post, are sticking to the democratic rules.

Young people also have more freedom, says human rights activist Emna Menif. "We have a long tradition of youth culture," she says, adding that it was the 2011 revolution that freed that culture from the claws of the regime: "It used to be that youth culture was dictated from on high. Now the people can do what they wish."

Nevertheless, Menif has reservations about the image of Tunisia as a glimmer of hope in a sea of turmoil. She says she distrusts the Islamists and that she doesn't believe they can be reined in by including them in the political process. In general, the activist adds, the optimism of many observers' is blinding them to the country's problems. There are two societies in Tunisia, says Menif: "One is enlightened and modern. The other has been pushed to the outer edges and socially marginalised."

"The 'Dunes Electroniques' is a great festival, but unfortunately, it's completely detached from our culture," she says, adding a note of criticism. "We have to change the culture. That would be the real revolution." An electronic music festival that is several hours' drive from the cities and villages in the north won't bring about that sort of change, she argues. After all, she says, it's impossible for everyday people to make it to "Dunes", and the ticket price of around 45 euros is too expensive for many young Tunisians. 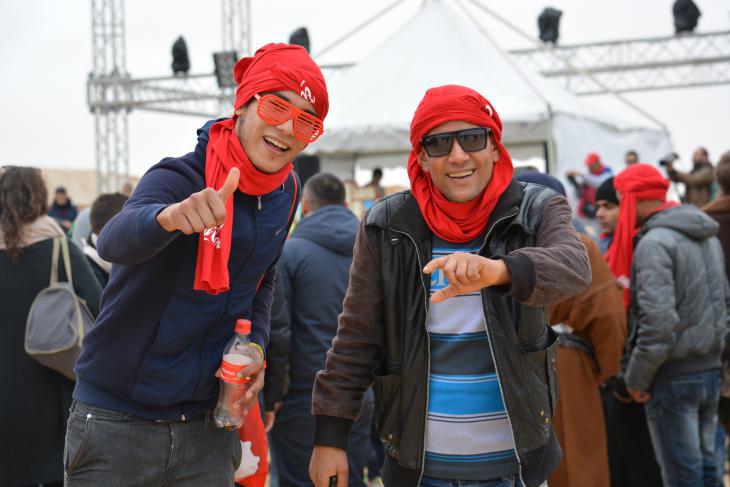 Techno, not terror: with civil wars raging in Libya and Syria, and the hopes for change in Egypt giving way to a new dictatorship, Tunisia is using the festival to present itself as a modern and cosmopolitan country

Coca Cola instead of politics

Outside in the car park near the security checks, several residents of the oasis village of Nefta set up their stands. There's coffee, dates and sandwiches on offer. For the festival's few foreign visitors, they've also brought desert roses and kachabias, the long robes with pointed hoods, which are typical for the region and strikingly similar to those worn by some of the characters in George Lucas's films.

On the festival grounds, Coca Cola is distributing advertising material. One attendee has scrawled "I love my beer" on his hat, while another in a colourful muscle shirt and sunglasses is visibly elated when the bass kicks in. He resembles a dancing dervish, spinning around to the music with outstretched arms. The only indication of the tense security situation in the country is the dozens of police vehicles and heavily armed soldiers on the crests of the dunes.

But it is the weather and not the political situation that is causing concern. The opening had to be pushed back by a day due to heavy rains and storms. Multiple DJs had to be left off the programme as a result. Instead of playing in the open air, they performed at nearby hotels.

The next day, the sky above the sandy dunes grew darker and darker. The dancers carried on despite the rain and desert sludge for several hours, but suddenly the music ground to a halt. This year, the electronic dunes were quite literally drowned out by the rain, but the festival is determined to strike back with episode 3.

Tunisia has launched a successful transition to democracy, but difficult economic and social times lie ahead. According to political scientist Said AlDailami, Europe should focus ... END_OF_DOCUMENT_TOKEN_TO_BE_REPLACED

Mass protests began in Egypt on 25 January 2011. They triggered the overthrow of long-time ruler Mubarak. Ten years later, many human rights activists and journalists are in ... END_OF_DOCUMENT_TOKEN_TO_BE_REPLACED

Mass protests began in Egypt on 25 January 2011. They triggered the overthrow of long-time ruler Mubarak. Ten years later, many human rights activists and journalists are in ... END_OF_DOCUMENT_TOKEN_TO_BE_REPLACED

Recent unrest shouldn't come as a surprise to anyone who's followed Tunisia's trajectory. The image of the North African country as the only "survivor" of the uprisings in the ... END_OF_DOCUMENT_TOKEN_TO_BE_REPLACED

Ten years after the start of the Arabellion in North Africa and the Middle East, many view the movement as a failure. But rather than being over, it has now entered a more mature ... END_OF_DOCUMENT_TOKEN_TO_BE_REPLACED

M’hamed Oualdi presents the story of a manumitted-slave-turned-dignitary in the Ottoman province of Tunis and the posthumous conflicts over his estate as a case study to ... END_OF_DOCUMENT_TOKEN_TO_BE_REPLACED
Author:
Jannis Hagmann
Date:
Mail:
Send via mail

END_OF_DOCUMENT_TOKEN_TO_BE_REPLACED
Social media
and networks
Subscribe to our
newsletter