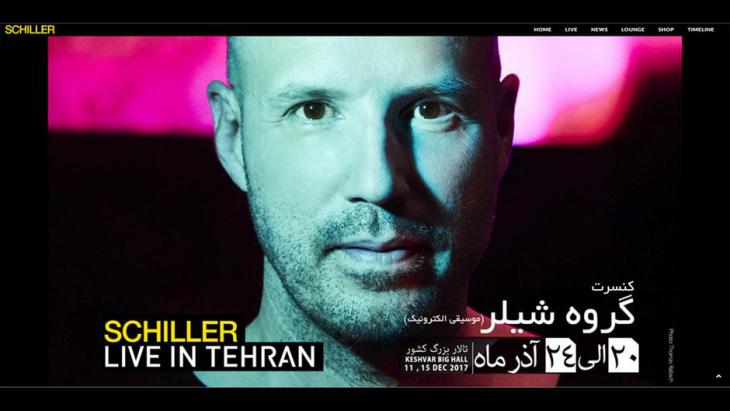 Electronic music band Schiller in Tehran
The pull of the West

The German electronic music band Schiller is famous worldwide. Its recent visit to Tehran was without doubt one of the concert highlights of post-revolutionary Iran – even though some audience members began to show signs of fatigue halfway through the concert. By Shahram Ahadi

Schiller in Tehran: five concerts on five successive evenings in one week, playing for 20,000 people. The location: the large auditorium of the Interior Ministry of the Islamic Republic, at the heart of Iran's capital. The performances by this German electronic music band were one of the great musical highlights of the post-revolutionary era, not just for the Iranian audience. Such an (in some respects exotic) experience is undoubtedly rare for the musicians themselves too. Two concerts were originally planned, but tickets sold out in the space of two hours so three extra dates were added.

"Initial contact was made about a year or so ago," says Mehdi Kashi, who organised Schiller's concerts in Tehran. It was important to him, he explains, that the band could present their music in Tehran using the best equipment and most up-to-date technical standards, just as it would in Europe, especially in terms of lighting.

Schiller, set to celebrate its twentieth anniversary in 2019, is not unknown in Iran. The early albums and hits such as "I feel you" gained the band fans in Iran from the beginning of the 2000s on.

In the audience in Tehran is Ramin Behna, a well-known musician in the fusion/electronic genre. The mention of the name Schiller plunges Behna into nostalgia. At the Tehran shows, however, Schiller plays only more ambient instrumentals, dominated by gentle, atmospheric sounds.

"The performance was great and I got a lot out of it as a musician, absolutely. But I noticed some signs of fatigue in some audience members from the middle of the concert on," Behna comments.

Behna puts that down to differing expectations. Part of the audience, he says, associate Schiller more with the hits and electropop songs of the earlier years. Other saw it as a must-see event. After all, this was a Western band – that alone makes it a big draw, he adds.

The financial aspect of bringing a group like Schiller to Iran and staging high-quality concerts is doubtlessly challenging. Tickets for the Tehran shows were officially priced between €20 and €50, but were traded on Ebay-like websites in Iran at up to €100.

In comparison to prices for Schiller performances in Germany (normally between €49 and €69), that may seem low. But when put in the context of the average Iranian income or the price of tickets for concerts by well-known Iranian artists, it certainly isn't .

"Shows like this are still good for Iran's music scene because they awaken new expectations among concert-goers in terms of standards," says Behna. He does have one concern, though, when it comes to "Made in the West" versus "Made in Iran": "We have festivals for electronic music in Tehran as well, but only about 100 people turn up. We mustn't let it happen that second or third-rate musicians from the West are invited to play lucrative shows here while Iranian musicians and bands go empty-handed."

Direct contact is important, Behna adds, to help the country become more open. Ideally, that would mean collaborations between Iranian and Western musicians, for instance on music projects or joint performances.

Iranian artist Parastou Forouhar has lived in Germany since 1991. Full of rage, just like the protesters, she hasn't yet given up on the idea of justice. By Julia Hitz END_OF_DOCUMENT_TOKEN_TO_BE_REPLACED

Unflattering terms were used at a German Football Association human rights congress aimed at "intensifying the discussion" ahead of the World Cup. One speaker in particular made ... END_OF_DOCUMENT_TOKEN_TO_BE_REPLACED

Fariduddin Attar’s "The Conference of the Birds", one of the seminal works of Islamic mysticism, has recently been published in sumptuously illustrated German translation. It ... END_OF_DOCUMENT_TOKEN_TO_BE_REPLACED

Egyptian authorities have Mada Masr in their sights once again after critical reporting. But the editor of the country's last independent news source is adamant they will continue ... END_OF_DOCUMENT_TOKEN_TO_BE_REPLACED

Like Christianity, Europe's history is one of migration. Both have strong roots in the Orient and in cultures thousands of years old. Cultural historian Bernhard Braun invites us ... END_OF_DOCUMENT_TOKEN_TO_BE_REPLACED
Author:
Shahram Ahadi
Date:
Mail:
Send via mail

END_OF_DOCUMENT_TOKEN_TO_BE_REPLACED
Social media
and networks
Subscribe to our
newsletter