Exile as a Metaphysical Problem

In Turkey, Elif Shafak had already won every notable literature prize but her work is hardly known outside her native country. This may change with her new novel, "The Saint of Incipient Insanities". Manuel Gogos has read it 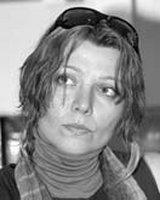 ​​Two dissimilar friends, recent arrivals to the USA, provide each other company in the form of mutual nightly monologues. And the best thing about two people communicating in a shared foreign language is that, in case of doubt, they can also understand each other without words.

Returning together from the bar at the crack of dawn, they are like "drowning men attempting to reach the surface of the water." Ömer and Abed, students from Turkey and Morocco, simply appear as a couple of non-descript drifters. What is actually going on with these two?

Ömer is a drunk. He is the only drunkard in a sober world. In his frenzy, he surfs on the merciless transitory nature of time. Ömer is an agnostic. He holds nothing holy, except, of course, coffee, post-punk, and women. What other choice does he have? In a world in which no fixed stars remain, he can at least fasten himself to his ideas.

​​The other, Abed, is perpetually sober. He is the only sober soul in a frenetic world. He detests alcohol. And even though he too regards Ömer as "lost," Abed makes no attempt to rescue him. Instead, he accompanies Ömer in the demimonde and underworld of American nightlife, making sure that his friend, oblivious of his actions, comes to no emotional or physical harm.

Reading the conversations of a notorious wanderer and an eternal home-comer on themes of obsession and yearning, one soon comes to the conclusion that the author understands something of the mystical narration logic of coincidentia oppositorum. Elif Shafak was born in Strasbourg in 1971. Together with her mother, a Turkish diplomat, she spent her youth in Madrid, Amman, and Cologne. She eventually returned to Turkey; today she splits her time between Istanbul and Arizona.

"The Sufi" – the best work in transcendental literature

Her first novel, The Sufi, published when she was only 27, tells the story of a hermaphrodite mystic in a Sufi fraternity. It was awarded by the Turkish Mewlana Society as the best work in transcendental literature. Her second novel, The Mirrors of the City, which is also translated into German, deals with the life of a Jew, who escapes from the Spanish Inquisition only by converting and making his way to the 17th century Ottoman Empire.

Even before reaching her thirtieth birthday, Elif Shafak had won every notable literary prize in Turkey. In just a short time, she was propelled to the heights of the young Turkish literary scene to become its most important representative alongside Orhan Pamuk. Until now, Elif Shafak has been almost unknown to the European reading public. The Saint of Incipient Insanities, her first novel written in English, has now been finally translated into German.

The "universal language" also forms the setting in which her international cast of characters must act. For the three main characters, Ömer, Abed, and the Spaniard Piyu, the third member of the group, a pious Catholic who reacts to his vague sense of guilt with a compulsive urge to clean, language serves as a formal structure – a house in which they can all live.

A world in which everything is placed into question

As in Kafka's fragment Amerika, the three are magician's apprentices, attempting to learn from the established masters of ceremony how to manage in this reality. Faced with a change of scenery, they must grope their way about in a world in which everything is placed into question. What follows is a passionate and humorous search by these characters in their struggle to process the signals encountered in this world.

They are aided in this pursuit by women. These, in turn, only prove themselves to be real Americans through their psychosomatic idiosyncrasies. There is Piyu's girlfriend Alegre, a Latino from a long line of proud women, who copiously cooks for all, yet is herself a sufferer of bulimia. And then there is Gail, whose earliest childhood recollection is of her first attempt at suicide. She achieves deliverance by throwing away her name "like a broken toy" and thereby completes a metamorphosis from a servile college girl into an "Assyrian-Babylonian goddess" with flashing bolts of lightning.

This young woman, a reader of Slavoj Zizek, burdened by exaggerated self-images and her neurotic body, constantly running to her therapist, and feeling far more alienated in her own skin than the greenhorns from the Middle East are in America, is Ömer's surprise choice for a wife. Gail, driven by feelings of unreality and paralyzed by the desire to "destroy her own plumage," turns out to be the actual "saint of incipient insanities."

More than just the global phenomena of social amnesia

Elif Shafak has thrown these eccentric inhabitants of the global village together under one roof and lets them discuss such matters as the concept of fate, the cultural relativity of fasting periods, the doors of perception for Sufis and junkies, and whether man needs God or God needs man.

Shafak is currently a professor of Intercultural Studies and Gender at the University of Arizona, where she holds critical and interdisciplinary lectures on Middle Eastern literature. She quite consciously plays with hybrid cultural clichés as well as with reader expectations arising from our cultural and linguistic conditioning. This intention, however, is perhaps the reason why in many scenes her characters remain a shade less than lifelike.

Shafak, however, is concerned with more than just the global phenomena of social amnesia arising from mass migration. Rather, there is a recognition shining through this iconic wall of everyday saints that, in the final analysis, "exile" is a metaphysical problem. These fallen angels are stuck in a wasteland marked equally by a lust for life and deathly anxiety, wantonness, self-hate, and shame.

Exploring the psychology of spiritual seekers

Their yearnings, expressed through numerous obsessions, remain unquenchable, characterized by a thorough longing in weariness, a search for direction in emptiness, and a comic mourning. Elif Shafak once referred to herself as an agnostic mystic. When her characters drink coffee or eat chocolate, Shafak's basic aim is to explore the psychology of a spiritual seeker torn between obsession and yearning.

Her characters, who are opaque even to themselves, make use of effusive gestures to give voice to the "incommensurable residue" of all human vitality, and, in doing so, simultaneously expose and guard the secret of their humanity.

Interview Orhan Pamuk
Struggling with the Elements of a Complicated History
The prominent Turkish writer Orhan Pamuk is under a barrage of threats in his homeland – for speaking out on sensitive issues. In this interview with Jörg Lau he talks about freedom in Turkey, the trauma suffered by its people and their waning enthusiasm for the EU

Sevgi Özdamar
German-Turkish Writer Wins Kleist Award
The Berlin-based German-Turkish writer and actor Emine Sevgi Özdamar recently won the Kleist Award. In the past the prize has been awarded to such illustrious names as Berthold Brecht, Heiner Müller, and Robert Musil. By Lennart Lehmann

Turkish Literature in Germany
The Failings of Turkish Intellectuals and Writers
With a few exceptions, Turkish literature is virtually unknown in Germany. Uli Rothfuss and Achim Martin Wensien ask whether this is due to the function of literature in Turkey or to the subject matter.

END_OF_DOCUMENT_TOKEN_TO_BE_REPLACED
Social media
and networks
Subscribe to our
newsletter