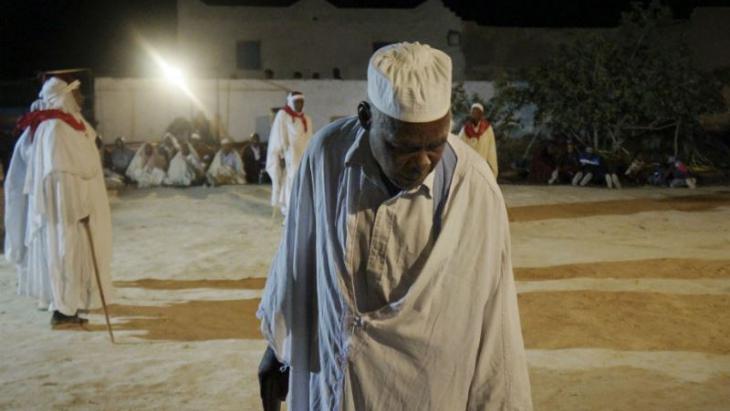 In the south-eastern Tunisian region of Medenine, music represented a socially marginalised way for post-emancipation blacks to advance. These days thatʹs not enough to satisfy the younger generation. By Marta Scaglioni

Tunisiaʹs former president, Zine el Abidine Ben Ali, fled his country on 14 January 2011 to exile in Saudi Arabia, after a series of uprisings that overthrew his government. Censorship was relaxed after the change in leadership and debates on previously taboo issues – such as racism against black Tunisians – gripped the media and the academic world.

Prior to 2011, Tunisians did not talk about ethnic or religious differences. After the country gained independence in 1956, Habib Bourguiba opted for a policy of nation-building (1957-1987), choosing to emphasise both the common history and the religious, ethnic and political homogeneity of all Tunisians. Nonetheless, the painful reality of racism and social segregation continued and many Tunisians still use the words wassif (servant) or ʹabid (slave) to refer to blacks.

There are no statistics on the percentage of blacks in Tunisiaʹs population, but black rights associations consider 15% to be a conservative estimate. Data is also lacking on the employment profiles of black Tunisians, but again their advocates say that they are predominantly in the lowest social classes. Mixed marriages between black and white Tunisians remain taboo and even today black people in rural areas refer to their former white masters as sidi and lella (master and mistress). It is clear that the role of slavery in Tunisiaʹs past is reflected in the present and in the ongoing socio-economic disparity between blacks and whites.

The "end" of slavery in Tunisia

Even though not all black Tunisians are descended from slaves, it is impossible to understand the history of black Tunisians without knowing something about slavery and the trans-Saharan slave trade. The import of slaves into what is today Tunisia from Sudan – "the land of black people" – reached its peak during the Ottoman Empire. During that time slaves were employed widely as servants or farm labourers.

The Bey of Tunis Ahmad I ibn Mustafa, who reigned from 1837 to 1855, was the first Muslim ruler to abolish slavery and the slave trade. Pressure exerted by the major European powers is likely to have played a role

These slaves were formally freed in 1846 when, uniquely for the Maghreb and Muslim world, the then ruler, Ahmad Bey, abolished slavery and the slave trade. Pressure exerted by the major European powers is likely to have played a role.

Following abolition, however, a north-south divide pertaining to the treatment of black Tunisians developed within the country.

In urban Tunis, on the north coast, many freed slaves ended up destitute and impoverished, turning to vagrancy, prostitution and peddling to survive. Most middle-class families, after all, now refused to employ them as servants. As a result, emancipation for the slaves was merely a legal formality and had little, if any, positive socio-economic impact.

By contrast, in the rural south, former slaves often remained in the households of their erstwhile masters as ousfane – domestic servants. Over the years, slavery in the south slowly morphed into another Islamic institution, walaʹ, a patronage relationship in which freed slaves adopt the name of their former masters, often adding ʹabid or shwuashin (the more politically correct term use to refer to freed slaves) to distinguish themselves.

Despite these differences, a convergence existed for some time between northern and southern post-abolition black trajectories – and that was in their music. Freed slaves from all over the country embarked on careers in music, as music was a profession that remained open to all blacks. The many ceremonies and festivities meant that it was in great demand, yet because of the low social status afforded to musicians, blacks faced little competition from the rest of the population.

Black singers and groups would often sing during weddings or pilgrimages to the saintsʹ tombs. In the eastern region of Medenine, for example, the musical accompaniment of tayfa was sought out for weddings, funerals and other gatherings – even by white families. Tayfa players would improvise songs praising the bride and groom and tell stories reflecting the local social or cultural history.

For older black Tunisians, in particular, this musical legacy is a source of great pride. "The south is full of poetry," said Ali, 80, proudly. "People here live and breathe poetry." In his village of El Gosbah, tayfa groups are still going strong despite the fact that the art itself is fading. Traditionally, fathers pass their skills on to their sons and teach them how to drum, sing, create poetry and improvise.

Tayfa players from older generations still attach great value and prestige to their singing. "Sometimes we sang for President Bourguiba on his birthday in Monastir," recalled Dhaw, now in his 80s. "Songs about how he brought independence to Tunisia, about how hard he worked and how modest and brave he was." The old men still regard having sung for the president as a great privilege, not least because he holds a special place in their memories. 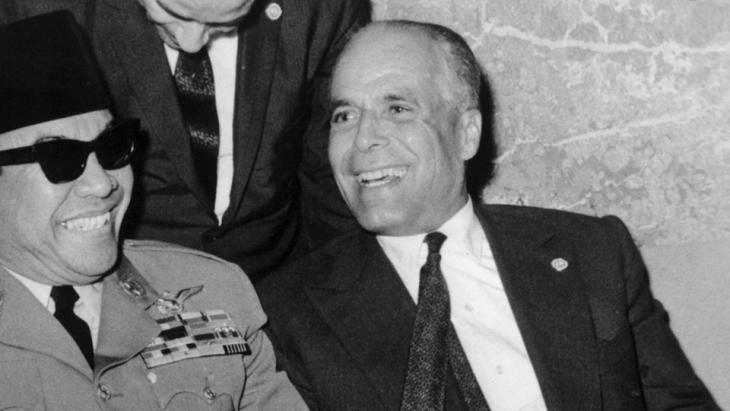 Tayfa to honour Tunisiaʹs president: "sometimes we sang for President Bourguiba on his birthday in Monastir," recalled Dhaw, now in his 80s. "Songs about how he brought independence to Tunisia, about how hard he worked and how modest and brave he was." The old men still regard having sung for the president as a great privilege, not least because he holds a special place in their memories

Pride too came from the sense of being entrusted by God with the task of remembering and recounting past events. Whatʹs more, it also meant they could provide for their families. As one man pointed out, "I managed to send all my six boys to school and to university because of tafya." Tayfa players were held in high esteem in the black community and often invested their earnings in social improvements.

But today Tayfa is perceived differently by the younger generation. Where once it was a source of pride for post-slavery blacks divided by class and by region yet united by low social status, the younger generation now see it as part of the structure that perpetuates inequality and underpins the paternalistic relationship that exists between whites and blacks.

Yassin, for example, is 29 and he refused to become a tafya singer even though his father was one. "White people ʹlook afterʹ tayfa because they still perceive us as slaves," he said. "They want to be praised by us…sometimes the songs say ʹlook how lucky you are, to marry such a white manʹ." Yassin rejects such degrading subservience. Itʹs hardly surprising then that one tayfa player was heard to lament, "Younger generations just donʹt want to sing tayfa any longer."

Once, tayfa players and other black musicians created an occupational niche for themselves which was socially inferior, yet also economically profitable. The economic and social gains they made were re-invested in their families and communities, translating into strategies of emancipation that have empowered todayʹs younger generations.

Yet these generations are destined to go their own way. Associating tayfa with past slavery, they reject it as a reflection of the ongoing disempowerment and marginalisation of black Tunisians. They are after something better.

Past attempts to reconcile logic and belief within Islam tend to be dismissed today – not because they lack merit, but because they were politically defeated, argues Mustafa Akyol END_OF_DOCUMENT_TOKEN_TO_BE_REPLACED

Nouara may be 65, but she is ready to join thousands of others who burn their ID and pay traffickers for the chance of a new life in Europe. Zineb Bettayeb reports END_OF_DOCUMENT_TOKEN_TO_BE_REPLACED

November 2022 sees the Arab world firmly in the spotlight with the COP27 in Egypt and the FIFA World Cup in Qatar. Public trust in MENA governments is weak, thanks to their ... END_OF_DOCUMENT_TOKEN_TO_BE_REPLACED

Daniel Barenboim is not only a world-famous pianist and conductor. He has also worked tirelessly to foster understanding and reconciliation between Palestinians and Israelis. By ... END_OF_DOCUMENT_TOKEN_TO_BE_REPLACED

END_OF_DOCUMENT_TOKEN_TO_BE_REPLACED
Social media
and networks
Subscribe to our
newsletter