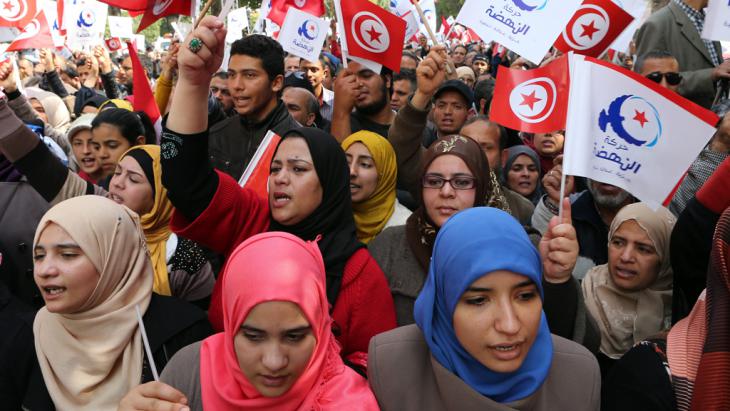 A blessing for Tunisian democracy?

Widely regarded as Tunisia′s equivalent of the Muslim Brotherhood back in 2011, Ennahda has moved a long way from its Islamist roots. Hans Dembowski assesses the latest developments

In May, Tunisia′s Islamist party Ennahda held a convention and decided to change course. Its leaders declared they were now Muslim democrats and would henceforth separate religious affairs from political activism. Ennahda′s mission, according to founder Rachid Ghannouchi, has evolved from defending the Muslim identity to ensuring the democratic transition after the revolution and ″today moves on to focus on the economic transition″. He also said that mosques should not get involved in politics.

This development is interesting. There can be no doubt that any kind of Arab democracy will need a political force that is rooted in Muslim tradition, culture and dogma. If, however, such a force insists on implementing its world view without compromise, it is not taking a democratic approach and cannot contribute to a fully fledged democracy. Ghannouchi′s statements suggest that he wants Ennahda to become something like the Christian Democrats that exist in several European countries, including Germany, where their leader is Federal Chancellor Angela Merkel.

Ennahda has come a long way. After the downfall of former dictator Zine El Abidine at the beginning of the Arab Spring in 2011, Ennahda was pretty much the Tunisian equivalent of Egypt′s Muslim Brotherhood, with which it shares historical roots. Both Ennahda and the Brotherhood fast became major political players and both formed governments. Both had a long track-record of underground activism during authoritarian rule and both were keen on finally enforcing their reading of the holy scriptures as national law. Ennahda, however, proved more willing to compromise. 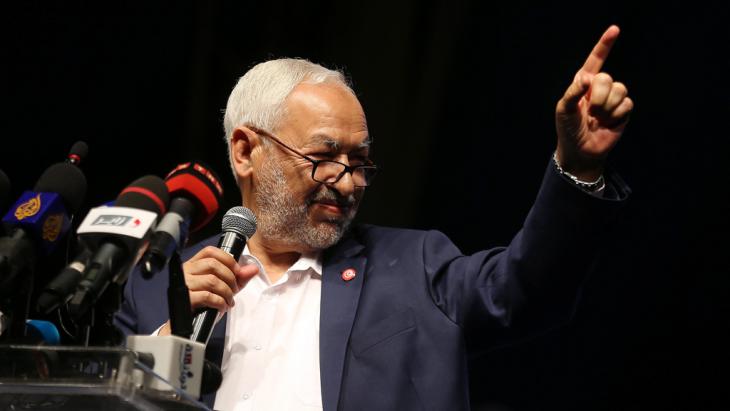 Forsaking the Islamist cause: "Ennahda′s mission, according to founder Rachid Ghannouchi, has evolved from defending the Muslim identity to ensuring the democratic transition after the revolution and 'today moves on to focus on the economic transition'. He also said that mosques should not get involved in politics," writes Dembowski

Ultimately, it joined forces with secular political parties to pass a democratic constitution. This decision was certainly inspired by two insights:

In view of these depressing developments, power sharing and the transition to a constitutional democracy looked much more attractive. The London-based Financial Times spells out quite accurate in an op-ed leader why this choice is most welcome. It would have been great if the Muslim Brothers had taken a similar stance. Egypt too might have had a successful transition to democracy and the Arab region would be in a better shape.

The downside is that one does not quite know whether to trust Ennahda′s most recent statements. The FT correctly draws attention to the fact that Turkey′s AKP party took a similar stance in the past two decades. It chose to prioritise democracy over religious dogma and that helped it to become Turkey′s strongest party. It is depressing, that its top leader Recep Tayyip Erdogan, who managed to dismantle Turkey′s authoritarian ″deep state″, is himself now becoming ever more dictator-like.

In retrospect, it does not look as if Erdogan ever really wanted to make Turkey a more liberal country, but more like he had an instrumental attitude towards constitutional principles. So long as they serve his power hunger, he′ll insist on them, but he′ll just as happily abandon them should he feel they are standing in his way.

It is impossible to say whether Ghannouchi means what he says today, or whether he will turn out to be just as power hungry as Erdogan should the opportunity arise. For the time being, however, Iet′s give him the benefit of the doubt. His current stance makes sense. It is the best way to serve his country. Things may always go wrong – but without some kind of Muslim democrats, they certainly will go wrong in Tunisia.

The change in U.S. president is also having an impact on the conflict between Turkey and Greece. Since the USA has started to play the Greek card, the strategic situation in the ... END_OF_DOCUMENT_TOKEN_TO_BE_REPLACED

Arab women played a leading role in the protest movement of 2011. Since then, ongoing social transformation has had a considerable impact on their lives. What is their assessment ... END_OF_DOCUMENT_TOKEN_TO_BE_REPLACED

They’ve already got the Louvre; they’ll soon have a Guggenheim Museum as well – and now the Emirates have added literature to their quest for cultural supremacy in the Arab world ... END_OF_DOCUMENT_TOKEN_TO_BE_REPLACED

Years in the making, Sisi's elite New Administrative Capital will isolate most Egyptians from their centres of government in an effort to fortify the regime against any social ... END_OF_DOCUMENT_TOKEN_TO_BE_REPLACED

Professor Timothy Brennan's "Places of Mind: A Life of Edward Said" is a detailed biography of one of the most important intellectuals of the twentieth century, taking us on a ... END_OF_DOCUMENT_TOKEN_TO_BE_REPLACED

China has long portrayed itself as a strong supporter of the Palestinian cause. It has also claimed that in sharp contrast to the stance of the USA, its position is based on ... END_OF_DOCUMENT_TOKEN_TO_BE_REPLACED
Author:
Hans Dembowski
Date:
Mail:
Send via mail

END_OF_DOCUMENT_TOKEN_TO_BE_REPLACED
Social media
and networks
Subscribe to our
newsletter