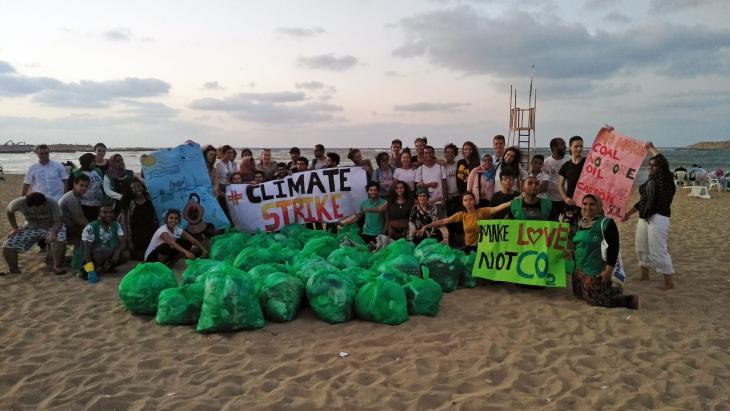 Environmental protection in Egypt
Did you enjoy your plastic meal today?

Has it ever crossed your mind that you are eating plastic on a daily basis? That you are drinking it? Apart from the thousands of trending pictures and videos on social media of animals and fish tangled in plastic, or even filled with plastic, are you aware that 83 % of our tap water contains microplastics? By Manar Ramadan

Plastic never disintegrates; it breaks into pieces smaller than 2.5 mm, known as microplastics, and becomes part of our food chain. This can happen through either of two scenarios: first, the water we drink is polluted with microplastics, causing numerous carcinogenic diseases and hormonal disturbances; second, animals accidently ingest plastic, unable to distinguish it from real food, then pass it on to us when we consume them.

In developing countries like Egypt, where cattle are often reared in the wild and in landfills, which are full of plastic, it is not hard to imagine that the material is part of their daily diet. Even when we keep them on farms and have more control, their feed will most likely contain plastic – this is the reality in Egypt as anywhere else in the world.

The problem does not lie in plastic itself, but in single-use plastics. While plastic is an extremely useful and versatile material that is part of almost everything we use in our daily lives – our laptops, mobiles, clothes, electrical insulation, and an infinite array of other objects – single-use plastics might serve us for a few seconds or minutes, but stay in our environment for up to 450 years and end up in our oceans.

Single-use plastics, such as disposable plastic bags, plates, cups, and bottles, are made of very light material. It only takes a slight breeze for them to take off and float into the nearest water channel, finding their way to the sea, and then to the ocean. Twelve billion plastic bags were produced in Egypt in 2017 – let that sink in.

The Ban Plastic movement: why we have to do it now 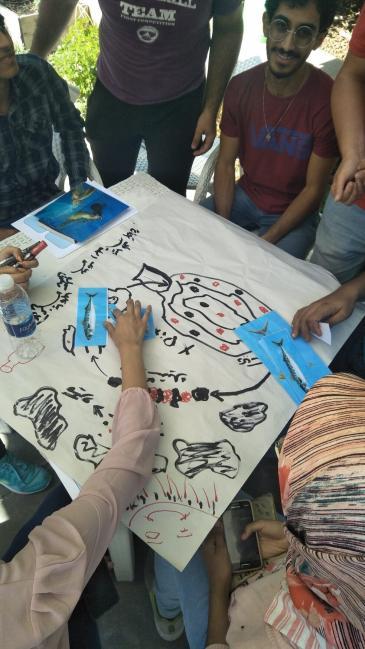 Raising awareness of the serious environmental consequences of the seemingly inexorable rise in plastic waste: at this workshop in Alexandria, participants examine marine litter taken from the Mediterranean. Alexandria is Egypt’s largest coastal city and the one worst affected by marine litter: in other words, it was the perfect place for Banlastic to start its anti-plastic initiative, which is active in over 70 countries worldwide

Alexandria is not only the largest coastal city in Egypt, but also the one most affected by marine litter: hence, the perfect spot for the Banlastic team to initiate the plastic ban movement in Egypt, joining more than 70 other countries that have taken measures towards achieving a plastic ban. If the effects of plastic on marine life and general aesthetics are not reasons enough, plastic items also fly around to clog rain drains, causing floods in the winter season. The disruption of the ecosystem is another aspect of this disaster.

In the summer of 2017, a huge number of jellyfish invaded the north coast and kept disgruntled beachgoers out of the water. If you wonder what this has to do with single-use plastics, here is the explanation: turtles feed on jellyfish. When in water, jellyfish look very similar to plastic bags, so turtles mistakenly eat plastic bags, which causes them to choke and die miserably. This has disrupted the whole ecosystem and contributed to a list of factors why sea turtles are under the threat of extinction. This was the main motive for us to start Banlastic Egypt in this city.

To raise awareness, we have used new participatory tools, such as social media, interactive workshops, and beach clean-ups, which were powerful in propagating the plastic ban movement. Engaging and advocating among beach visitors was a priority, as they are direct contributors to marine litter. Through conversations, the display of shocking pictures of animals affected by plastic, gamifying the litter collection process for children and rewarding them with plastic-free snacks, we were able to engage hundreds of Alexandria visitors in the summer of 2019.

A new advocacy tool we used during the climate strike week on 21 September was to take and upload pictures of branded packaging polluting the environment, tag the companies on social media, and encourage them to invest more money in research and development to find eco-friendly packaging for their products. Participating students designed posters for the climate strike week and spread them via different social media channels.

The devaluation of the Egyptian pound combined with rising food prices is taking its toll on Egypt. More and more people are slipping into poverty. Karim El-Gawhary reports from ... END_OF_DOCUMENT_TOKEN_TO_BE_REPLACED

Egyptian Sufis have been on the defensive against the country's Islamists for decades. Meanwhile, interest in mysticism is growing among the young members of Cairo’s middle and ... END_OF_DOCUMENT_TOKEN_TO_BE_REPLACED

Abortions are illegal in Egypt unless they are necessary to save a married woman's life. But that doesn't stop local women from having one. Egyptian society needs to acknowledge ... END_OF_DOCUMENT_TOKEN_TO_BE_REPLACED

Food prices doubled, salaries halved, banks restricting withdrawals: Egyptians now have the same problems as the Lebanese. But if things get worse here, the fallout will be far ... END_OF_DOCUMENT_TOKEN_TO_BE_REPLACED

Giessen, Eichsfeld, Kusel, Berlin – cars bearing old German number plates are the latest trend on the streets of Cairo. Many Egyptians regard the discarded plates as chic. What ... END_OF_DOCUMENT_TOKEN_TO_BE_REPLACED

END_OF_DOCUMENT_TOKEN_TO_BE_REPLACED
Social media
and networks
Subscribe to our
newsletter