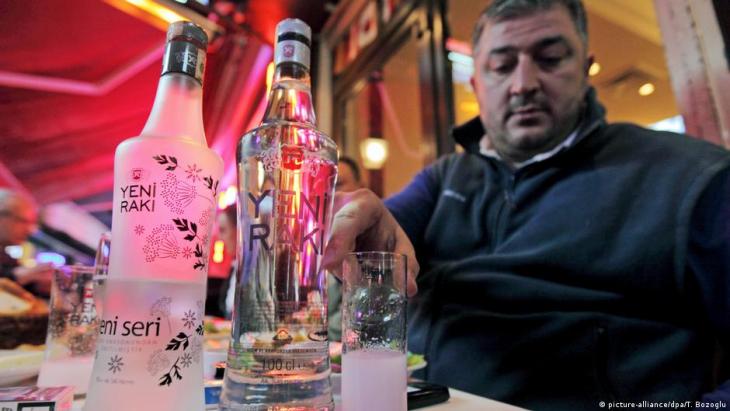 Istanbul's beloved "meyhane" are where friends traditionally meet for a glass of raki or a game of backgammon. Now, however, owners and patrons are worried that new government restrictions could spell the end for these local hangouts. By Tunca Ogreten and Daniel Bellut

The meyhane are just as much a part of Istanbul as Hagia Sophia or Galata Tower. These traditional bars, found in lively districts like Beyoglu, Kadikoy and Besiktas, are where locals meet friends to play a round of backgammon or wile away a warm summer evening. Here, they can order a plate of appetisers, known as meze, accompanied by one or two glasses of raki, an aniseed-flavoured alcoholic beverage known colloquially as lion's milk.

But many are worried that these popular local hangouts could soon be a thing of the past. COVID-19 and the strict hygiene regulations introduced to fight the pandemic have posed an extra financial burden on meyhane owners. But a new government campaign intended to "combat addiction", announced recently by Turkish Vice President Fuat Oktay of the conservative Islamic Justice and Development Party (AKP), will ban any signs identifying a meyhane, shisha bar or tobacco shop. And that could be the final nail in the coffin.

Nevizade, a well-known street in Beyoglu which boasts several meyhane, is usually packed with people. Recently, it's been looking pretty dead, with only one establishment open on this particular day. Its door is covered in old concert posters and a more recent sign advertising "cold appetisers for takeout".

"Our tavern culture is going to disappear," said Hakki Karakoc, the owner. "It will never recover from this."

Tan Morgul, a food expert who has written many books about Istanbul's meyhane culture and now lives in London, is less certain. The taverns, he admitted, have always been a thorn in the side of Turkey's rulers. "Already in the Byzantine era, Istanbul was a city in which many human civilisations came together," he said. "People have always gathered in public spaces like drinking halls or taverns."

But for those in charge, these places have always been controversial. "From Byzantium to the Ottoman Empire – the conservative rulers never liked the meyhane," he said. He explained that this was because it was the only place that the government had no influence, where "people came together and shared their problems and ideas." For this reason, there had already been several previous attempts to shut them down, he said.

Meyhane owner Hakki Karakoc said he didn't understand the new government measures – the past year had been difficult enough for him and his colleagues. He complained that the AKP government had been restricting alcohol and tobacco sales for years now and was getting closer to an outright ban. 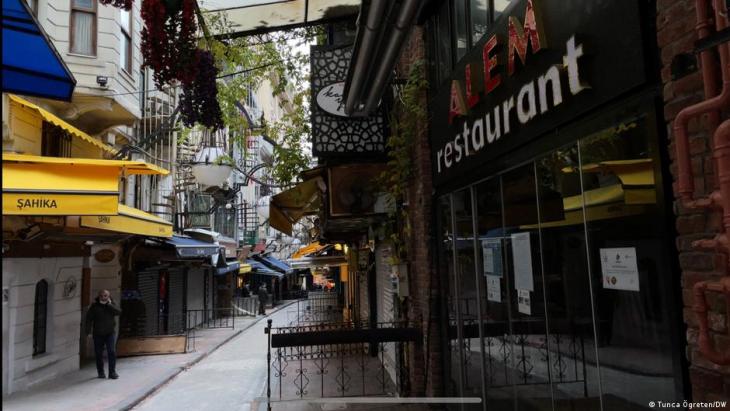 The final nail in the coffin? COVID-19 and the strict hygiene regulations introduced to fight the pandemic have posed an extra financial burden on meyhane owners. But a new government campaign intended to "combat addiction", announced recently by Turkish Vice President Fuat Oktay of the conservative Islamic Justice and Development Party (AKP), will ban any signs identifying a meyhane, shisha bar or tobacco shop

It was bad enough when smoking was banned indoors, he said, but the 2013 law that prohibited kiosks from selling alcohol after 10 p.m. was even worse. The most painful development, however, was the steep rise in alcohol tax: a 0.7-litre bottle of raki that cost the equivalent of €4.20 in 2010 goes for as much as €20.50 today.

Yet Turkey still promoting the 'art of drinking raki'

Addiction experts doubt the government's latest move will do anything to help fight addiction. Baris Gurkas, a psychologist based in Istanbul, said it was unrealistic "to believe that an alcoholic will stop drinking because the tavern sign is taken away."

"If the government's aim is really to fight addiction, the first step would be to improve health care," he said, adding that it would make more sense to give psychological support to addicts and those at risk of dependency.

Considered alongside the efforts of Turkey's Tourism Ministry, which continues to praise the country's drinking culture, the new ban is even stranger. On its website, GoTurkeyTourism, tourists are introduced to raki, the "spirit of joy, taste, friendship and sharing" that is "mainly consumed in meyhanes."

"Drinking raki is an art and raki has its own culture. It is unusual for a Turk to drink alcohol without eating at the same time," says the site.

Istanbulites take pride in being the world’s melting pot and its natural outcome: having a bustling abundance of international cuisine. Visiting restaurants opened by recent ... END_OF_DOCUMENT_TOKEN_TO_BE_REPLACED

Award-winning poet Dincer Gucyeter’s debut novel is a tour de force through the German reality he experienced as an artist and son of Turkish immigrants, written with an unsparing ... END_OF_DOCUMENT_TOKEN_TO_BE_REPLACED

The Kurds are under attack from two sides: from Turkey, and from Iran. The situation in their territories in northern Iraq is becoming increasingly desperate. Birgit Svensson ... END_OF_DOCUMENT_TOKEN_TO_BE_REPLACED

Canan Topcu came from Turkey to Germany as a child. In her essay, she describes how bothered she was by the racism she encountered in her country of origin when she travelled ... END_OF_DOCUMENT_TOKEN_TO_BE_REPLACED

According to Turkey’s revised media legislation, spreading "fake news" now carries a prison sentence. The definition of what this entails has been kept intentionally vague. ... END_OF_DOCUMENT_TOKEN_TO_BE_REPLACED

On 3 November 2002, Erdogan's newly founded AKP, Justice and Development Party, came to power in Turkey. It has ruled the country ever since, becoming more authoritarian with each ... END_OF_DOCUMENT_TOKEN_TO_BE_REPLACED
Author:
Tunca Ogreten & Daniel Bellut
Date:
Mail:
Send via mail

END_OF_DOCUMENT_TOKEN_TO_BE_REPLACED
Social media
and networks
Subscribe to our
newsletter