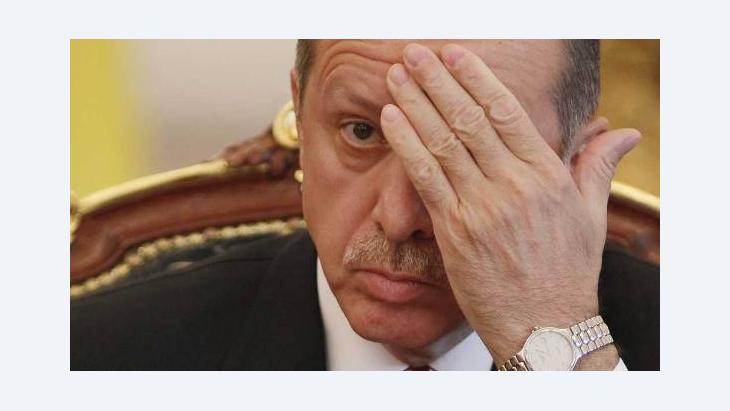 In the past decade, there were three kinds of Islamist governments: absolute monarchies in the Gulf region, the Mullah dictatorship in Iran and the freely elected government of Prime Minister Erdogan in Turkey. How he is running his country is setting an example for the entire region. But experts believe that his authoritarian leanings are beginning to prevail. By Peter Hauff

In late October this year, the international community was worried about troops operating along the Turkish-Syrian border. Security experts were surprised by Ankara's assertiveness. According to Hugh Pope, who specialises in Turkey and Cyprus for the International Crisis Group, this attitude results from the nationalist domestic stance of Prime Minister Tayyip Erdogan.

Hoping Turkey would join the EU, Erdogan's faith-based AK Party, which has historical roots in Egypt's Muslim Brotherhood, implemented many reforms since first winning power in elections in 2002. The reforms vastly reduced the influence of the military, creating new public spaces for minorities, but also extending the powers of the prime minister. Today, critics increasingly accuse Erdogan of being more interested in authoritarian leadership than in democracy.

At a conference at Evangelische Akademie Loccum in Germany, ICG expert Pope recently argued that Turkey has begun to retreat from democratic achievements. At the same time Erdogan is trying to influence western policymakers, especially in regard to the humanitarian consequences of Israel blocking access to Gaza, according to Pope. The non-governmental expert insists, however, that Erdogan is doing so "by legitimate means", for instance by relying on Turkey's hard won membership of the UN Security Council.

It remains unclear how serious Erdogan is about civil rights in his country. Ali Ertan Toprak of the European Alevi Federation says he is taking advantage of his party's majority in parliament to restrict the rights of Kurdish, Christian, Armenian and Arab citizens of Turkey. 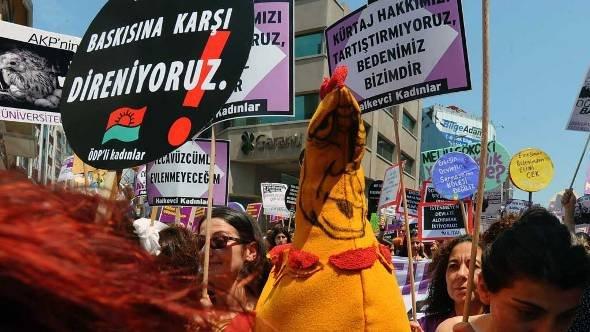 "Turkey needs to look in the mirror": Minorities and women, who do not submit to orthodox Islam, are more worried than ever before because of government agencies' increasingly authoritarian attitudes. Pictured: Thousands of abortion rights demonstrators stage protest against plans by Turkey's Islamic-rooted government to curb abortion on 3 June 2012

​​Minorities and women, who do not submit to orthodox Islam, are more worried than ever before, Toprak says, because of government agencies' increasingly authoritarian attitudes, which become evident in restrictions on using Alevi assembly houses to commemorate dead soldiers, for instance.

According to Toprak, government jobs are given to people who belong to Erdogan's faith and even party. He denies there is a free civil society. A German citizen who was born in Ankara, Toprak demands that the EU "do more to make Turkey look in the mirror".

European opportunities have gone to waste however. The government of NATO member Turkey no longer considers accession to the EU a priority. "We are part of Europe; we don't need any certificate," says Şafak Göktürk from the Foreign Office in Ankara. Turkish voters, in his view, want tangible progress, for instance in terms of visa-free travel to the EU.

According to him, European fears over illegal migration are just "a pretext". Once Europe drops its visa requirements, the diplomat says, Turkey will sign an agreement reached in 2011 on fighting illegal migration. The EU, however, insists on the reverse order.

It does not help that a recent progress report that was written on behalf of the European Commission spells out worries about human and civil rights in Turkey. The report admits that there are fewer cases of torture than previously, but it insists there still is illegal state violence, and too few perpetrators are prosecuted.

There is resentment on both sides, says Murat Erdogan of Ankara's Hacettepe University. "I personally feel more freedom than 20 or 30 years ago," states the professor, who is not related to the prime minister. "Obsessing about obstacles will not get us anywhere, we need to look forward." Some 3 million Turks are living in Germany – more than citizens of any EU member country. This diaspora has a positive bearing on Turkey, the scholar points out, because its members tend to insist on democratic principles at home in a particularly convincing way.

Having taken control of the traditional media, Turkish President Erdogan is now extending his reach to the social networks. A new law has been passed to rein in major digital ... END_OF_DOCUMENT_TOKEN_TO_BE_REPLACED

Although a unity government was formed in Libya in March 2021, tensions and possible crises between the political actors are already emerging. What problems does the country face ... END_OF_DOCUMENT_TOKEN_TO_BE_REPLACED

In Islamic mysticism, Ramadan is more than just a period of prescribed abstinence, signifying an opportunity for inner contemplation. Marian Brehmer explores the spiritual ... END_OF_DOCUMENT_TOKEN_TO_BE_REPLACED

The USA and NATO plan to withdraw from Afghanistan by September. The operation is risky, the outcome uncertain. Many Afghans fear civil war. The quake on the Hindu Kush will also ... END_OF_DOCUMENT_TOKEN_TO_BE_REPLACED

The neo-Ottomanism propagated by Erdogan has long been more than rhetoric and symbolic politics. This can be seen from recent developments in parts of northern Syria, where Turkey ... END_OF_DOCUMENT_TOKEN_TO_BE_REPLACED

Televised Turkish dramas are all the rage in the Middle East. A young Ottoman TV Empire has been expanding its soft power by harnessing regional dialects, Arabic names and viewers ... END_OF_DOCUMENT_TOKEN_TO_BE_REPLACED
Author:
Peter Hauff
Date:
Mail:
Send via mail

END_OF_DOCUMENT_TOKEN_TO_BE_REPLACED
Social media
and networks
Subscribe to our
newsletter