Almost all NATO troops have withdrawn from Afghanistan. Turkey is looking to fill the gap and is offering itself as a new protective power. But the Taliban are sending clear threats in the direction of Ankara. By Hilal Koylu

With almost all Western soldiers having withdrawn from Afghanistan, the central government is now largely on its own in the fight against the Taliban. Yet Kabul could soon receive military support from Ankara. Turkish President Recep Tayyip Erdogan revealed plans to this effect to his U.S. counterpart Joe Biden on the fringes of the NATO summit in Brussels in June. The focus of the engagement is apparently to be Kabul's Hamid Karzai Airport, which Turkish soldiers could protect.

In Brussels, NATO Secretary General Jens Stoltenberg emphasised the importance of Turkey, which could play a "key role" in Afghanistan. An official decision on the project has not yet been made, however, and negotiations between Ankara and Washington may be going on behind the scenes.

But it is not only Western actors who are defending their interests in the event of a possible Turkish operation in Afghanistan. Since the extensive withdrawal of foreign troops, the Taliban have also made their claim to power in the country clear – their units are on the advance in numerous regions. Most recently, the Taliban succeeded in capturing a strategically important district in the Afghan province of Kandahar.

Taliban will not tolerate Turkish "occupation"

Turkish involvement has been welcomed by NATO officials because Turkey, as a Muslim-majority country, could play a mediating role on the Hindu Kush. Taliban spokesman Suheyl Shaheen, meanwhile, clearly rejected the plan to the BBC. Any foreign soldiers who remained in the country after September would be treated as occupation forces, he said. "All foreign forces, contractors, advisers, trainers should withdraw from the country." 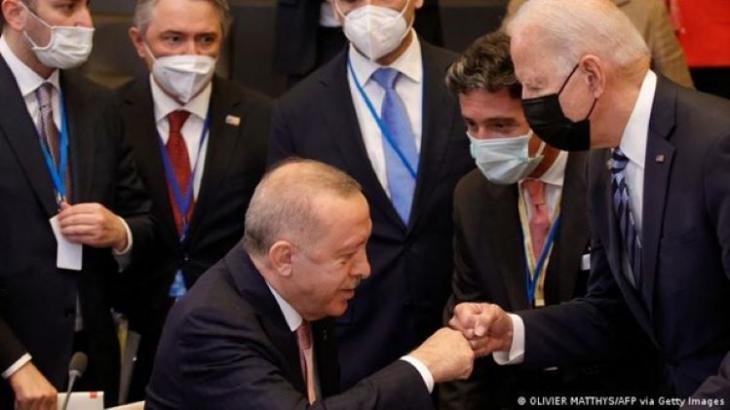 Protective role of Turkish troops a highly risky proposition: "Foreign soldiers in Afghanistan have to be tolerated by the Taliban," says Sezin Oney, a specialist in international relations. Experts assume that President Erdogan is currently trying to smooth the waters with its Western partners, not least to avoid sanctions. As a result, Ankara is even prepared to take on risky operations in Afghanistan: "Erdogan is trying to show that he is turning towards the West," adds Ilhan Uzgel

Experts warn of the enormous risks of a Turkish military operation in Kabul. Ilhan Uzgel, an expert on international relations at Ankara University, recalls that the 60,000 Taliban face a nominally 300,000-strong Afghan army that has been trained by NATO for 20 years.

"Yet Afghan cities are being retaken. The Afghan army, which is actually stronger on paper, is not making much of an impact on the battlefield," he analyses.

Sezin Oney, a specialist in international relations, also believes that the Taliban's triumphant advance cannot be stopped. "Foreign soldiers in Afghanistan have to be tolerated by the Taliban," Oney said. Therefore, he said, the Turkish government's hands are tied. Faruk Logoglu, retired ambassador, also points out that the Taliban has recently expanded its dominance. "If Turkey ignores the risk posed by the Taliban, there will be dire consequences, both financial and moral."

Turkish relations with many NATO partners are also strained. Washington is not alone in expressing incomprehension over Turkey's decision to protect its airspace with Russia's S-400 missile defence system.

In response to these decisions, the U.S. has kicked Turkey out of the F-35 stealth bomber programme, which the Turkish Air Force is now denied. Relations have also been strained by the U.S. president's decision to classify the massacre of Armenians during World War I as genocide.

Experts assume that President Erdogan is currently trying to smooth the waters, not least in order to avoid sanctions. To appease its Western partners, Ankara is now even prepared to take on risky operations in Afghanistan, says expert Ilhan Uzgel. Ankara is sending a clear message to the West that it wants to co-operate more on security issues. "Erdogan is trying to show that he is now turning towards the West."

Home
Print
Newsletter
More on this topic
Interview with Afghanistan expert Ahmed Rashid: "The Americans were completely devoid of any strategy"U.S. and NATO withdraw from "the forever war": What we should all know about AfghanistanU.S. withdrawal from Afghanistan: Joe Biden and the West's betrayal of the Hindu Kush
Related Topics
9/11, Al-Qaida, Ashraf Ghani, Jihadism | Jihadists, Joe Biden, Military, NATO, Recep Tayyip Erdogan, Taliban
All Topics

After coming to power, the Islamist group imposed a ban on girls' education, prompting some Afghans to set up an underground school. Hussain Sirat and Ahmad Hakimi spoke to some ... END_OF_DOCUMENT_TOKEN_TO_BE_REPLACED

As the Western world emerges from a holiday season made less festive by COVID-19, millions of children in Afghanistan are starting 2022 facing the prospect of famine, illness, and ... END_OF_DOCUMENT_TOKEN_TO_BE_REPLACED

Each year, thousands of people travel to the Turkish city of Konya to attend a week-long series of events and ceremonies that mark the death of the 13th-century Islamic poet, ... END_OF_DOCUMENT_TOKEN_TO_BE_REPLACED

Their exhausting escape from the Taliban took them from Kabul to Qatar, though European cities and U.S. military bases. But now this Afghan family has finally arrived in a small ... END_OF_DOCUMENT_TOKEN_TO_BE_REPLACED

The Pakistani Taliban, known by the acronym TTP, are regrouping and reorganising, with their leadership headquartered in neighbouring Afghanistan, according to a U.N. report from ... END_OF_DOCUMENT_TOKEN_TO_BE_REPLACED

END_OF_DOCUMENT_TOKEN_TO_BE_REPLACED
Social media
and networks
Subscribe to our
newsletter