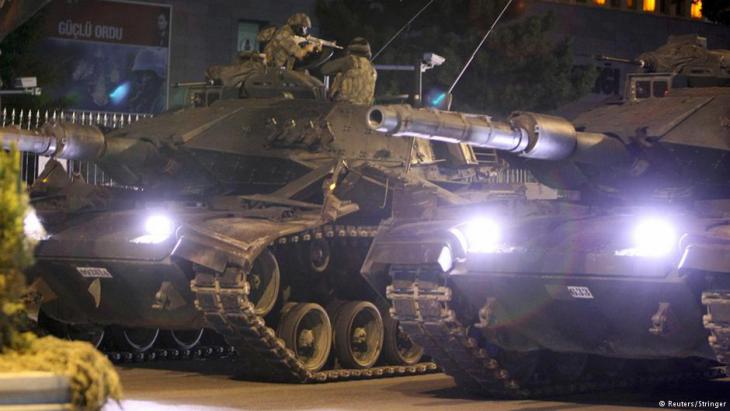 An attempted coup in Turkey led to a night of gunfire and explosions, with residents waking up to an uncertain future. Diego Cupolo reports from Ankara

Heavy gunfire lasted through the night and into an unnerving dawn in Ankara, before shots died down gradually as the sun rose higher into a sky that had been filled with smoke clouds, military helicopters and fighter jets only hours earlier.

Scenes of mass casualties continued to pour through social media streams as residents of the capital city woke up to an uncertain fate following an apparently failed attempt to remove President Recep Tayyip Erdogan from office.

Only when military tanks and vehicles occupied the city centre did it become clear that a military coup was underway. Military personnel moved swiftly to disarm Turkish police officers, who tend to back Erdogan's government, before occupying the TRT Turkish national television station to announce martial law and declare the coup a success.

But the night would not end so easily. Gunfights broke out between coup plotters and police officers who were called on duty to defend the state, while supporters of the AKP, Turkey's ruling Justice and Development Party, filled the streets heeding Erdogan's call to protest the coup.

Heavy artillery fire could be heard as helicopters circled the city and shot down at police positions and possibly civilians, pumping bright yellow streaks of light down into the city streets. Meanwhile, two to four jets circled the city allegedly bombing the Turkish parliament building while state officials were inside, as well as, causing damage to Erdogan's presidential palace.

Whether or not the jets were used for aerial bombing remains unclear, but scenes of destruction from the parliament confirm heavy artillery was used on the building, injuring some of the MPs inside. Helicopter fire, though, was widely documented on social media and witnessed by the author of this article, who counted nearly 18 large explosions from his location in Cankaya.

As the fighting continued, mosques in Ankara sounded an extraordinary call to prayer throughout the night, infusing the violence with surreal if not apocalyptical chants that served to calm some, while compelling others to join the protests. Men with megaphones walked the streets demanding residents leave their apartments to join the mass protests that would eventually foster the first cracks in the coup attempts.

As graphic scenes of carnage unfolded in both Ankara and Istanbul, Erdogan was believed to be in his presidential plane circling above Turkey to avoid possible arrest or assassination attempts.

After 8 hours of ongoing fighting, the military coup attempt began to falter. Erdogan landed at Ataturk airport, where he delivered a speech to reassure supporters. Soon afterwards, police officials began arresting plotters and posting videos on social media of military personnel in handcuffs and some of them being lynched by angry mobs.

When the sun began to rise, Turkish Prime Minister Binali Yildirim announced fully armed military jets had been dispatched from Eskisehir air base to down pro-coup aircraft, highlighting that only a faction of the Turkish military had staged the coup and not all members of the armed forces were backing their actions.

The bombings and heavy artillery fire soon subsided in Ankara as a result and the coup collapsed in the early morning hours on Saturday. Occasional gun battles could be heard in the central district, but their brevity signalled the violent events were coming to an end.

Media reports estimate over 260 people were killed through the night and more than a thousand injured. The streets in Ankara are now lined with broken windows and the sound of residents sweeping shards of glass into wastebaskets accompanies the overwhelming sense that no one knows what to expect next.

Research project "The Global Qur'an", brainchild of Professor of Islamic Studies Johanna Pink and sponsored by the European Research Council, analyses the history and ... END_OF_DOCUMENT_TOKEN_TO_BE_REPLACED

Each year, thousands of people travel to the Turkish city of Konya to attend a week-long series of events and ceremonies that mark the death of the 13th-century Islamic poet, ... END_OF_DOCUMENT_TOKEN_TO_BE_REPLACED

A wedding extravaganza of bright colours, flowers, feasting and dancing, yet the bride, Nefie Eminkova, who comes from Bulgaria's Pomak – Muslim – minority, can see none of it. ... END_OF_DOCUMENT_TOKEN_TO_BE_REPLACED

A new Netflix drama series showcasing Istanbul's Jewish community in the 1950s depicts a once multicultural city. It is a production that pulls no punches, exposing dark chapters ... END_OF_DOCUMENT_TOKEN_TO_BE_REPLACED

Every year in December, the team at Qantara.de takes a look back at the articles that proved most popular with our readers. This year is no different. Here is a run-down of the ... END_OF_DOCUMENT_TOKEN_TO_BE_REPLACED

END_OF_DOCUMENT_TOKEN_TO_BE_REPLACED
Social media
and networks
Subscribe to our
newsletter