"Ergenekon" Network in Turkey
On a Subversive Mission

86 members of the Turkish nationalist secret society Ergenekon have been in the dock since last October, accused of planning to overthrow Prime Minister Erdogan. The Kemalist opposition, however, alleges the case is a legal witch-hunt to silence the government's critics. Ömer Erzeren has the details

86 members of the Turkish nationalist secret society Ergenekon have been in the dock since last October, accused of planning to overthrow Prime Minister Erdogan. The Kemalist opposition, however, alleges the case is a legal witch-hunt to silence the government's critics. Ömer Erzeren has the details 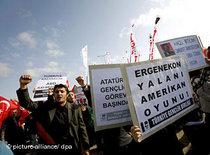 Conspiracy theory over alleged AKP witch-hunt against secular forces: protests against the Ergenekon trial in Silivri

​​ Ergenekon is the name of a pre-Islamic legend of warring Turkish tribes in central Asia, popular among nationalist circles. At the moment, though, the name is on everybody's lips in Turkey for very different reasons.

It's not the legend that's provoking debate, but a trial that has been setting the domestic agenda for months, leading to a skirmish between the government and the opposition.

Following the discovery of a weapons cache in 2007, the ensuing investigations ended in mass arrests and a trial of 86 defendants, opened last October.

The state prosecution office accuses the defendants of forming a criminal organisation with the aim of launching a coup through terrorist acts. The majority of the defendants come from the nationalist camp, which opposes the governing Islamic party AKP.

The case is likely to go beyond the 86 individuals currently in the dock, as the arrests continued even after the 2500-page indictment was submitted. Raids uncovered secret weapons caches, with a total of almost 200 arrests, the majority of whom are now in detention pending their trials. The state prosecutors are currently working on a second indictment.

The Ergenekon trial is in fact an opportunity to square up to the blood-stained history of political murders and terrorist bombs in Turkey. For the first time in the country's history, serving officers and retired generals have been indicted.

The generals' plans for a putsch were allegedly laid five years ago, while they were still on active service. The indictment refers specifically to the murder of a judge at the higher administrative court in 2006. According to the charges, Ergenekon planned to murder the judge and place the blame on Islamic forces, weakening the conservative Muslim government under Prime Minister Tayyip Erdogan.

With benefactors in extremely high places, the terrorist group accused of planting bombs and sowing murder for the Turkish "nation and fatherland" can be traced a long way back. Its targets have varied depending on the political situation: the left wing in the 1970s, the Kurdish movement in the 1990s and now political Islam.

Ergenekon's past "state within the state" 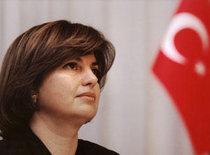 ​​ November 1996: a car accident in the town of Susurluk on the Aegean saw a high-ranking police officer and a multiple contract killer die in the same vehicle. Details emerged of high-ranking officials commissioning assassins and bombers in the interest of the state.

These political murders and bombings, which reached a peak in the mid-1990s under Prime Minister Tansu Ciller, were part of a state strategy to combat the Kurdish separatist PKK illegally.

An official report by the special investigator commissioned by the subsequent government confirmed that the terrorist network had been controlled from above. One of the central figures in the network was the police functionary Ibrahim Sahin, who was in charge of the "Special Operations Department" – and reported directly to the interior minister.

Sahin was sentenced to eight years' imprisonment at the time, claiming to have acted in the "national interest". He is now behind bars again, awaiting his next trial. Sketches were found at his home that led police to secret weapons caches.

However, the approach taken by the police and state prosecutors has prompted the impression that breaking up a criminal network is not their only objective. Baykal's Kemalist opposition party CHP has railed against the Erdogan government, criticising it for "pestering" and "intimidating" critics

​​Alongside members of the military and secret service and criminals, the waves of arrests also included lawyers, journalists, lecturers, politicians and trade unionists, all of whom have claimed that Ergenekon has been used as a government ploy for a retaliation campaign. The accused also include high-profile opinion-leaders from the nationalist camp.

Evidence against these individuals for membership of a terrorist group is thin on the ground. One of the mainstays of the state case, an informer currently living in Canada, is also an extremely unreliable witness.

To top it all, the Turkish media are now being flooded with police and state prosecutor interrogation protocols and taped phone calls, even before they reach the courtroom. The pro-government media are currently vying for ever more spectacular scoops on the Ergenekon trial.

It comes as no surprise then that the trial has divided Turkish society. The opposition leader Deniz Baykal recently made serious accusations against the government.

Climate of fear and defamation

Baykal, chairman of the Republican People's Party (CHP), accused the government of installing a "totalitarian regime", drawing comparisons to the Reichstag fire laid by the Nazis to get rid of the opposition. The Turkish government, he said, is attempting to put a gag on the democratic opposition, accusing "decent citizens" and "intellectuals" of collaboration with terrorists. 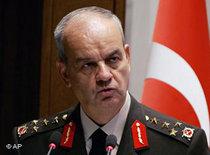 ​​ While Turkey's prime minister Tayyip Erdogan has demonstratively supported the state prosecutor and the police – saying that the police deserve applause for their work – critical voices in the country's newspapers have drawn parallels to the events of the McCarthy era.

One example cited is Kemal Gürüz, chairman of the powerful higher education council from 1995 to 2003. He was among those arrested but was released by the committing magistrate.

As chairman of the higher education council, it was Gürüz who imposed the ban on women wearing headscarves at Turkish universities. And the dismissal of the vice-chancellor of Kirikkale University for his close relations to the Islamist movement ten years ago was also his doing. The former vice-chancellor, Besir Atalay, is now interior minister in Erdogan's cabinet.

Claiming suspicion of involvement in Ergenekon, police raided the home of the former senior state prosecutor Sabih Kanadoglu, a well-known critic of the governing party. Kanadoglu played a decisive role in convicting Sahin in the Susurluk case.

Other individuals who have been arrested, such as the former Marxist lecturer Yalcin Kücük, are also difficult to imagine as members of a terrorist group. Kücük is a political jester who came to fame spreading absurd conspiracy theories on television and in the press. 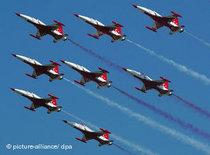 Nationalist Ergenekon organisation: for the army, nation and fatherland – against Kurds, left-wingers and political Islam

​​ The case of two former generals also reveals the extent of the political influence at play. Following an unscheduled meeting between the army chief of staff Ilker Basbug and Prime Minister Erdogan, the two were released from prison, without going before a magistrate – an alarming illustration of the power of the military to intervene in investigations.

It seems rather bizarre that so many high-profile Turkish nationalists would belong to a secret terrorist group. If the government really is exerting political influence over the investigations and trial – in an attempt to put paid to the nationalist camp with its solid basis in society – this would be another missed opportunity to square up to Turkey's bloody past.

Qantara.de
Documentary about Mustafa Kemal Atatürk
A Film Has Turkey Talking
A documentary on the founder of the Turkish Republic is causing a stir in Turkey. As young audiences in particular engage with the controversial film, the filmmaker and journalist Can Dündar is increasingly coming under attack. Yet he is anything but a strong critic of Atatürk. Jürgen Gottschlich has the details

Head of Judiciary: Abdurrahman Yalcinkaya
Turkey's Hard-core Prosecutor
Kemalists regard him as the keeper of the Grail: Abdurrahman Yalcinkaya, Turkey's Chief Prosecutor. With his proclaimed intent of closing the ruling AK party for "anti-secularist activities", he has recently stirred up a new political storm. Semiran Kaya introduces the uncompromising prosecutor

Mustafa Kemal Atatürk
From Saloniki to Ankara
Modern Turkey is inconceivable without its founder Mustafa Kemal Atatürk. The republic he established and its ensuing cultural orientation toward the West paved the way for Turkey to join the system of Western alliances. By Klaus Kreiser

END_OF_DOCUMENT_TOKEN_TO_BE_REPLACED
Social media
and networks
Subscribe to our
newsletter