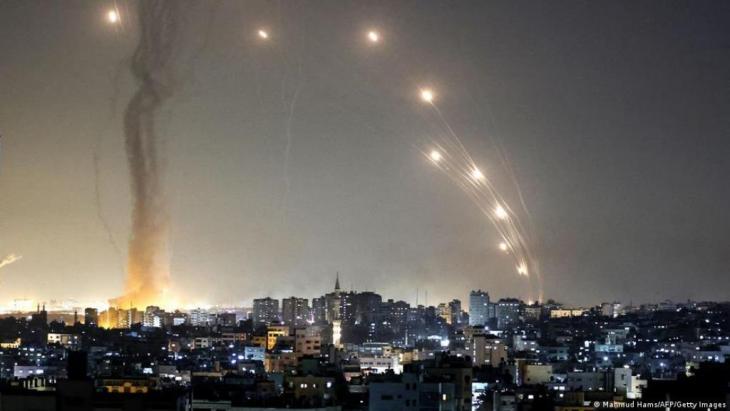 A local row triggered by ultra-right wing Jewish settlers trying to secure the forced expulsion of Palestinian families in East Jerusalem has re-ignited hostilities in the Middle East. As the bombs and rockets fall on Gaza and Israel once again, there is seems little prospect of a swift end to the clashes. By Inge Gunther

Israeli security forces are saying that Hamas has finally crossed a “red line”. There can only be one response to the seven rockets fired by the group in the direction of Jerusalem – beginning a period of sustained fire from Gaza aimed at border communities in Negev since Monday evening: to crush the military wing of the Palestinian radical Islamists once and for all, says Israel. A short time later, we saw the launch of the military operation "Guardian of the Walls"; with air strikes on Gaza that have killed 28 Palestinians within the first 24 hours.

The chorus of voices clamouring for Israel to flex its superior military muscles as a deterrent is loud and large. But it was the same back in the summer of 2014, when a series of violent tit-for-tat attacks culminated in a devastating Gaza war. That lasted seven weeks, cost around 2,300 Palestinian and 72 Israeli lives and brought massive destruction to the isolated coastal strip. Hamas’ weapons caches were destroyed in Israeli air strikes and during the ensuing ground offensive, which left its Izz ad-Din al-Qassam Brigades weakened – but not defeated on the ground. The ceasefire agreed at the time was repeatedly broken. But largely due to Egyptian mediation, a new war was able to be averted at the last minute.

In order not to completely squander the dwindling popularity of Hamas in Gaza, the head of the organisation Yahya Sinwar prioritised the reconstruction effort. As a result, Israeli Prime Minister Benjamin Netanyahu opted for some sort of cooperation with the Islamists, instead of upgrading the status of the comparatively moderate autonomous government in Ramallah in negotiations.

A Gaza war could play into Netanyahu's hands

But this time, the political situation is far more complex. Netanyahu is still only head of a caretaker government, after three ultra-right partners rejected outright a coalition that would have tolerated the small Arab-Israeli Ra’am party led by Mansour Abbas. Now, Yair Lapid and Naftali Bennett are joining forces to form an alternative government. 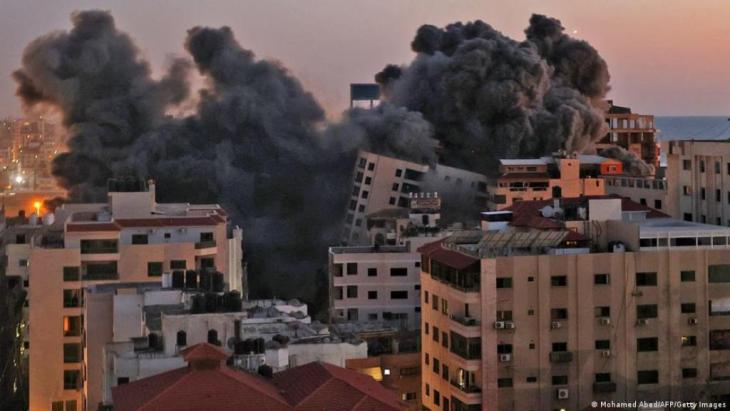 Netanyahu's red line: "Whereas up until the rocket attacks on Jerusalem Israel’s security authorities appeared divided over their tactical response, they now present a united front in their bid to crack down hard on the militant Islamists, keen to prove the superiority of their forces," writes Inge Gunther in her analysis

They also need Arab voices as majority generators. On Monday, the plan had been to secure a corresponding agreement at a meeting with Mansour Abbas. The much-courted Abbas cancelled the appointment in view of the escalation in Gaza "until calm is restored".

Abbas may be seen as a pragmatist, but like Hamas he comes from the Muslim Brotherhood. This means that the longer the fighting goes on, the fewer opportunities there will be for a change of government in Israel. In this respect, Hamas has "ironically done Netanyahu a final service", says Haaretz commentator Amos Harel.

The fire starters of Hamas

For Mohammed Deif, commander of the Hamas brigades, there are probably quite different reasons that he is now risking such an unexpected confrontation with Israel. Physically, he is crippled, having lost both legs and an arm in Israeli assassination attempts. But his willpower appears undented. After the PLO leadership in Ramallah postponed Palestinians parliamentary elections, Deif appears to be focused on finding a way to boost the influence of Hamas in the West Bank and East Jerusalem.

Palestinian President Mahmoud Abbas (85) is deeply unpopular there. His Fatah, the majority group within the PLO, is mired in in-fighting. In the elections, two competing off-shoots wanted to enter the race against the old Fatah guard led by Abbas. Hamas figured it that with its list "Jerusalem is our way" it would improve on its chances to capture most of the votes.

Deif was a name on everyone’s lips when unrest flared up on Temple Mount, revered in Islam as al-Haram al-Sharif (Noble Sanctuary). He fanned the battle cries of Palestinian activists in heavy clashes with the Israeli police squads that had entered the Al-Aqsa Mosque complex in full battle gear at the weekend.

The actual trigger for the protests that left hundreds injured, some of them seriously, had nothing to do with Hamas or Al-Aqsa, but with an ongoing legal battle between the pro-settler organisation Nahalat Shimon and Arab families living in the district of Sheikh Jarrah in East Jerusalem. That Deif is holding fast to his "promise" that the Israelis must "pay a high price" for their provocations means he is currently feted as a hero among younger Palestinians.

This does not yet mean that we are seeing the start of a third Intifada. But the risk of sliding into a new, uncontrollable Gaza war is great. And as we know from experience, those that end up paying the price are the ones that are not involved in the violence: Palestinian civilians living in the crisis-wracked Gaza Strip, as well as people in Israeli neighbourhoods on the other side of the border fence.

Dim prospects for a ceasefire

Whereas up until the rocket attacks on Jerusalem Israel’s security authorities appeared divided over their tactical response, they now present a united front in their bid to crack down hard on the militant Islamists. Netanyahu and Defence Minister Benny Gantz have both emphasised they intend to see terrorist groups set back years.

Consequently, a Hamas offer showing interest in a return to the ceasefire, delivered through a third party, was initially rejected by Israel. Unlike recent violent escalations there is little evidence that the current crisis will be brought to a swift end. Mohammed Deif may have overstretched himself both politically and militarily – to his own personal detriment.

Asmaa al-Atawna's debut novel "Missing Picture" has been published in German translation (Keine Luft zum Atmen – Mein Weg in die Freiheit). In it, she describes life in Gaza from ... END_OF_DOCUMENT_TOKEN_TO_BE_REPLACED

At the end of every year, the team at Qantara.de gives you a run-down of the ten most-read articles on the site over the past 12 months. Here is a quick overview of the stories ... END_OF_DOCUMENT_TOKEN_TO_BE_REPLACED

Palestinian Christians are an integral part of the Palestinian national movement. This is the conclusion reached by the Chilean-born Palestinian political scientist Xavier Abu Eid ... END_OF_DOCUMENT_TOKEN_TO_BE_REPLACED

Jesus – Issa in Arabic – doesn’t merely enjoy the highest place among the prophets in the Koran. He is also revered in Islam’s mystical tradition for his message of love and mercy ... END_OF_DOCUMENT_TOKEN_TO_BE_REPLACED

With reported hostilities against Israeli journalists and the flag of the Palestinian territories flying on the streets and in the stadiums, it is clear the World Cup in Qatar is ... END_OF_DOCUMENT_TOKEN_TO_BE_REPLACED
Author:
Inge Günther
Date:
Mail:
Send via mail

END_OF_DOCUMENT_TOKEN_TO_BE_REPLACED
Social media
and networks
Subscribe to our
newsletter