Skip to main content
Escalation of Violence in the Middle East

The Road Leads via Jerusalem

The latest escalation of violence in the Gaza Strip illustrates all over again: Hamas and Iran can only be weakened if the Palestinians finally have the prospect of a proper state. An analysis by Volker Perthes

​​ Military escalations such as the Israeli invasion of Gaza tend to obscure our view of the structural changes in the Middle East power balance. Two events have had a key effect on this balance in recent years: the 2003 Iraq war and the 2006 Lebanon war.

The Iraq war revolutionised the regional geopolitical relations. For the first time since the end of the colonial period, an Arab state was entirely occupied by a power from outside the region. Since then, the USA has not only been a hegemonic power, but the strongest military force on land in the Middle East.

The Israeli withdrawal from Gaza and the removal of Syrian troops from Lebanon saw a new drawing up of borders, which may never have been recognised under international law but were in fact very hard lines of dominance. The fragile old regional order broke down at several points, but no new order was created.

Significant shift of power in the Middle East

That meant a shift in the balance of power; on the political and ideological level, secular Arab nationalism took what was presumably a mortal blow, as the swift toppling of Saddam Hussein and Fatah's defeat against the Islamist Hamas in the 2006 Palestinian elections soon showed. 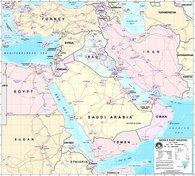 ​​ The winners are various versions of political Islam – from the now governing parties in Iraq to national conservative Islamist forces such as Hamas in Palestine, the confessionalist militia party Hezbollah in Lebanon; terrorist groups of the likes of Al Qaeda also profited from the development.

Western players have now realised how important it is to differentiate between the differing shades of Islamism. On the state level, they will have to make a distinction between the power shifts in the Arab world and those in the rest of the Middle East. Saudi Arabia, for example, now plays a diplomatic role that would have seemed impossible not long ago.

This includes initiatives in the Israeli-Palestinian peace process or in Lebanon, along with an active policy on Iran. Riyadh is attempting to balance out the influence of Teheran, simultaneously entering into dialogue with Iran on the political level and blocking US attempts to establish an anti-Iran alliance of "moderate" Arab states.

Lebanon war – a test of strength

The main beneficiary of the power shifts, however, is Iran. Iraq is no longer a threat, Iranian influence in Lebanon has increased – and the split in the Palestinian National Authority has given Iran's leadership a ticket straight into the Gaza Strip, if nothing else.

The 2006 Lebanon war and the 2003 Iraq war had a key influence on the power balance in the Middle East, according to Volker Perthes

​​ Plus, Iran is the only regional power still challenging the US hegemony. The nuclear programme will further strengthen this position, even if Iran never does build a bomb. It is enough for its neighbours to believe that Teheran is capable of doing so.

In view of this situation, it was hardly a surprise that the 2006 Lebanon war was seen as a test of strength between Israel and Iran, if not even between the USA and Iran. Above all, it showed how fragile the regional order was. A wave of political confessionalism was unleashed, in which the originally geopolitical conflicts were reinterpreted in the light of the religious schisms between Sunni and Shi'a groups.

The Lebanon war also demonstrated that regional problems cannot be solved unilaterally. As a result, the war prompted a turn to realism – and a rediscovery of diplomacy.

It is no longer enough to "work around" the conflict, as EU parlance occasionally puts it, says Volker Perthes

​​ Egypt mediated between Israel and Hamas. Saudi Arabia made an effort to mediate between the two sections of the Palestinian Authority and towards talks between the Afghan government and the Taliban. Qatar helped the Lebanese conflict parties and their regional patrons to agree on a new power distribution. Turkey organised indirect negotiations between Israel and Syria at the two states' request.

However, the return of diplomacy did not mean the conflicts were not continued, at full force. Regional dynamics will still be determined in future by occasional violent attempts to fill power-political vacuums. In Gaza and Lebanon, it is not only local groups fighting for dominance. Here as in Iraq, the USA, Iran and Saudi Arabia are competing for influence.

The Balkan Stability Pact – a model for the Middle East

How should western states react to this confused situation? Firstly, they will have to take into account the shift in power from the old centres of the Middle East towards the Persian Gulf and its large states of Saudi Arabia and Iran. That means initiating regional security arrangements for the Gulf. If a model should be needed, the Balkan Stability Pact would presumably be suitable.

Secondly, the regional players should be encouraged to play their diplomatic cards more strongly. In actual fact, the agendas of Turkey, Saudi Arabia and Egypt concerning regional conflicts in recent years have frequently been much more pragmatic that those of many western powers.

These structurally conservative forces at least have no interest in a drastic alteration of relations in the Middle East. And they have not rejected talks with players such as Hamas – which have eluded the international consensus without which solutions cannot be implemented.

Thirdly, the recent violence between Israel and Hamas shows how important a credible peace process in the Middle East remains for the region as a whole: it is no longer enough to "work around" the conflict, as EU parlance occasionally puts it.

Nor does complaining of Iranian influence in Palestine improve matters. This influence will continue to grow, the more the Palestinians' hope for a two-state solution fades.

Only a return to credible negotiations on the borders of Israel and the Palestinian state, on Jerusalem, the settlements and the refugees will weaken Hamas and the influence of Iran.

Volker Perthes is Director of the German Institute for International and Security Affairs in Berlin. The institute advises the German government on issues of foreign policy.

Commentary by Avi Primor
The Key to Peace Lies in Damascus
It's now official: Israel and Syria are holding indirect peace talks. A peace agreement between the two countries could break Iran's dangerous influence in the region, says Avi Primor, former Israeli Ambassador to Germany

Israel Turns 60
A History of a Conflict
May 14 marks the 60th anniversary of the founding of the state of Israel. While Arabs call the day "the catastrophe," many Israelis aren't in the mood to celebrate. A look back on six decades of dreams and nightmares. Peter Philipp reports

END_OF_DOCUMENT_TOKEN_TO_BE_REPLACED
Social media
and networks
Subscribe to our
newsletter