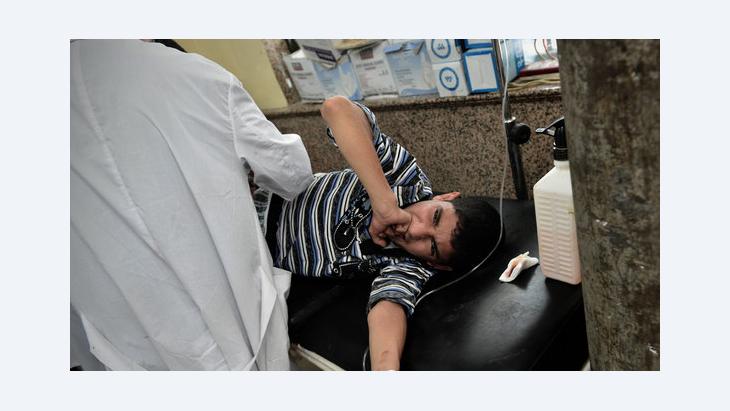 Escaping the Civil War in Syria

Humanity amid the Horror

Mansour Al Rajab devoted six years of his life to establishing and building up a clinic in Syria. The war turned it into a field hospital, the grenades into a heap of rubble. Although the doctor was able to flee to the Czech Republic, his heart remained in Homs with the revolution. By Martin Nejezchleba

As soon as he saw his friend and colleague after his release from detention, it was clear to Mansour Al Rajab that it was time to get out. ﻿Soldiers had taken it in turns to beat his friend before throwing him into a bath with his own excrement and making him lie in it for 40 days.

When the 50-year-old doctor talks about the horrors of the Syrian civil war, he remains objective, unspecific. It is as if such horrors don't belong here in the calm and quiet world of his exile.

"When he saw me, he broke down in tears," says Rajab, in the dim light of a Prague pub. The military had asked about him, his friend told him. "Knowing that they're after you is much worse than grenades or bombs," says the doctor with the greyish-blue eyes. Life became a living hell; every car sighted in the rear view mirror was a potential threat. 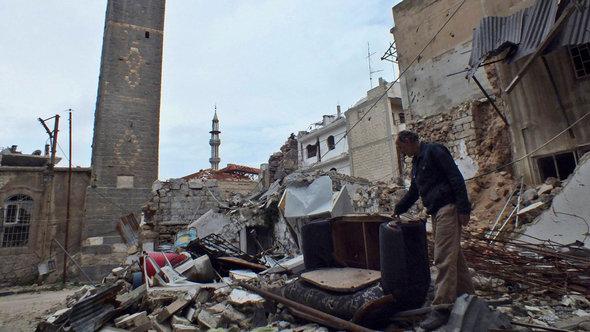 Homs – a rebel stronghold and a bulwark of opposition in Syria – has suffered greatly at the hands of government troops. It was here that Mansour Al Rajab spent six years building up his clinic, which was razed to the ground in June 2012

Rajab prepared everything well. He was taken over the border to Lebanon by a gang of smugglers. Because he needed an official stamp in his passport to get into the Czech Republic, his passport took a different route to Beirut. Rajab, whose mother is from the Czech Republic, had studied medicine at the Charles University in Prague in the 1980s. Former undergraduate colleagues helped him secure a job as an ENT specialist in Mladá Boleslav, not far from the Czech capital. Rajab feels at home here. He has good professional prospects, he is earning money, he is among friends.

But in the evenings, his thoughts are with his compatriots and his family, who were able to find refuge in Jordan. He talks on the telephone with his three daughters almost every day. Doctors in his home town often send him photos of wounded patients. He then consults his colleagues at the Czech clinic, before advising doctors back home via Facebook on how best to treat the injuries.

If you were to bump into Mansour Al Rajab near his apartment on a Prague prefab estate, there is nothing to distinguish him from all the other people battling the bitter wind as they hurry between the grey blocks. It also takes a while to detect the hard Arabic consonants when he's speaking Czech. Sometimes he is forced to revert to an English word.

After he has sat down at a table in the dark sports bar, taken off his warm winter jacket and ordered a cup of tea, he removes his thin-rimmed glasses and allows them to dangle on a cord around his neck. He begins to talk about life in his home city of Homs, about how he was shot at by snipers every day on the way to his clinic, about how he had to amputate the legs of a man who had been tortured for three days. I realise with a shudder the kind of world Rajab fled less than four months ago. 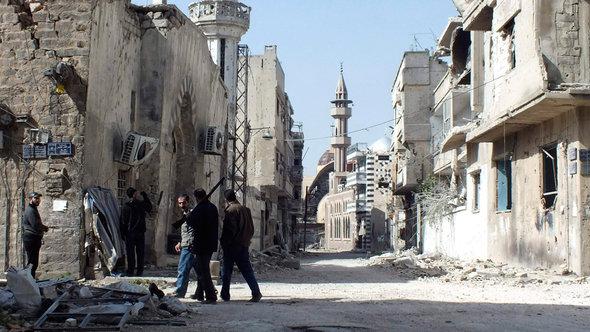 Despite the horrors of the war in Homs, Mansour Al Rajab has experienced the overwhelming solidarity of the people of Syria's third-largest city and their touching humanity in the face of adversity

It took him six years to build up his clinic – one of two hospitals in the country with a linear accelerator for radiotherapy. After the first protests against President Bashar al-Assad were brutally crushed in the city of Daraa in March 2011, Rajab's home city of Homs quickly became a rebel stronghold, and his clinic a field hospital.

Because it was located in Jouret El Shaiah – a district regarded as a bulwark of opposition support – government troops razed it to the ground with mortars on a Saturday in early June just as they flattened half of Syria's third-largest city. "We've got around half a million refugees who have fled from Homs to Homs," explains Rajab. People have only survived the humanitarian catastrophe thanks to the overwhelming solidarity within the population, he says.

Together with his team, he fled to Damascus and took over the hospital of his brother-in-law, who had left for Jordan. Then his colleague was abducted and Rajab began to plan his own escape to Prague.

A demonstrator carries a bust of Stalin with a sign that reads "Nothing Lasts Forever" in Prague in 1989. Mansour Al Rajab is convinced that it is only a matter of time before the Syrian dictator Bashar al-Assad is toppled

​​"My heart," he says, "is with the revolution." He already experienced one at first hand in 1989: the "Velvet Revolution", which toppled by peaceful means what was then the totalitarian regime of Czechoslovakia. "Up to that point I thought the Czechs were not interested in politics, that they were happy as long as they could go for a beer every night," he recalls. It was his Czech friend, now a senior doctor, who took Rajab to the big demonstrations in Prague, where hundreds of thousands of people jangled bunches of keys to sound the death knell for Communism. It was then that the young Syrian doctor understood the power that slumbers within oppressed people.

The war in his homeland has awoken the very same realisation. It was only when he treated the wounded at his clinic in Homs, where he and his entire team spent their days and nights for six months, that he saw the humanity of his fellow citizens, he says. "We couldn't accept the volume of blood that people wanted to donate," smiles Rajab. He misses his field hospital.

What does he hope for? That the free world places the same value on the lives of his compatriots as it does on the lives of all others. Never before has a dictator slaughtered his own people on such a scale, he says. Two hundred people lose their lives every day. "We don't need sugar, we don't need flour; what we need is an end to the violence," says Rajab. As far as he is concerned, it is only a matter of time before Assad the dictator is toppled. How many human lives will be sacrificed before that day comes, he says, depends on the international community.

Reading Hassan Blasim's God 99 is an immersive experience of grief and exaltation, anger and disgust, writes Marcia Lynx Qualey. We join the Iraqi narrator as he sits around in ... END_OF_DOCUMENT_TOKEN_TO_BE_REPLACED

Turkey's parliamentary and presidential elections are scheduled for June 2023. But they are already casting a shadow. While the opposition is calling for early elections, ... END_OF_DOCUMENT_TOKEN_TO_BE_REPLACED

Recep Tayyip Erdogan, disappointed by the European Union’s reluctance to integrate Turkey into its ranks, has re-directed his country’s diplomacy toward the Maghreb and Africa to ... END_OF_DOCUMENT_TOKEN_TO_BE_REPLACED

A law is currently being debated in Morocco that would legalise the cultivation and export of medicinal cannabis. For many small farmers, this would bring considerable advantages ... END_OF_DOCUMENT_TOKEN_TO_BE_REPLACED

Philosopher Juergen Habermas was due to be awarded a major Arab prize in Abu Dhabi, but has turned it down following criticism. This decision torpedoes Arab efforts at a ... END_OF_DOCUMENT_TOKEN_TO_BE_REPLACED
Author:
Martin Nejezchleba
Date:
Mail:
Send via mail

END_OF_DOCUMENT_TOKEN_TO_BE_REPLACED
Social media
and networks
Subscribe to our
newsletter