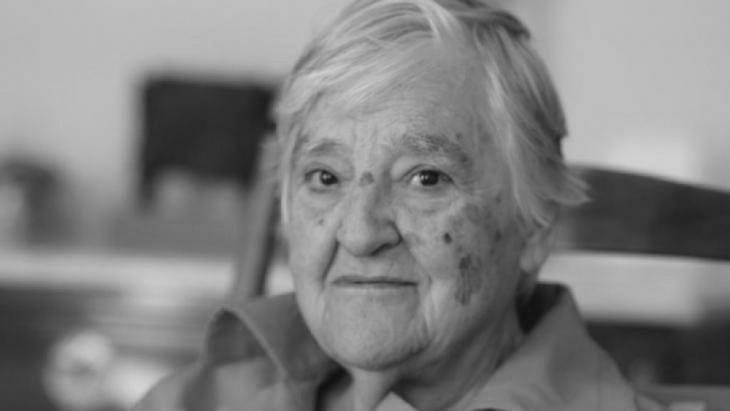 Etel Adnan, the artist who transcended the borders of culture and language, may have died in Paris, writes Lebanese author Elias Khoury, yet her death holds a mirror up to the stifling rhythm of what Beirut has become. Indeed, every death now seems a metaphor for the death of Beirut

Forced migrations and exile could not rid this particular death of its symbolic nature. Death is what we owe life, and yet amid all the grief and misery of today, it somehow seems more like a crime.

Etel Adnan's life demands more than an obituary. Her paintings brought our souls – released from our bodies – together, like brightly coloured birds swept up in the music of love.

She was a woman full of questions and innocence. I got to know her – she, a 50-year-old child – when Beirut countered violence with poetry and she turned nightmares of ruin into dreams. Etel died a child aged ninety-six. Reading her verse is like discovering the first ever poem. Looking at her paintings, we peer through windows into the soul to discover innocence of colour. Her novel reminds us of the first words to confront this brutal world with clever naivety and joie de vivre.

Many languages, many art forms

Re-reading her poetry, it is as if I have never read it before. Etel Adnan's verse is a place where you come together with a poem, which then reads you as you read it. Many things are there to confuse: the mix of languages and countries, the Syrian father, Greek mother, the child of Beirut. You move from French to English to Fawaz Traboulsi's translations of her poems [ed: into Arabic], as if all languages were blended into one with no name – a language as clear as water, reflecting the depths of our souls and calling to them.

Thinking about her paintings, what comes to mind is sheer colour. Etel Adnan did not create paintings; she created colour. It is as if the colours hover above the canvas, trying to catch your eye. Her gift was to inject colour into the eyes of the beholder, rose-tinting this cruel world with childhood, wonderment and love.

Etel's poetic style is difficult to quantify. Her poetry breathes colour, her colours poetry. Her language is everyone’s language. Read her work and you feel as if you have travelled beyond language, as you move from Vietnam to Palestine, from the home of the Native American to Beirut, on a never-ending journey that reveals the passion for freedom and justice in all of us.

Etel lived with her partner, the sculptor Simone Fattal, in a multitude of places, from California to Beirut and Paris, but it was always in a city environment with a myriad of streets and neighbourhoods, akin to Beirut and in harmony with it. 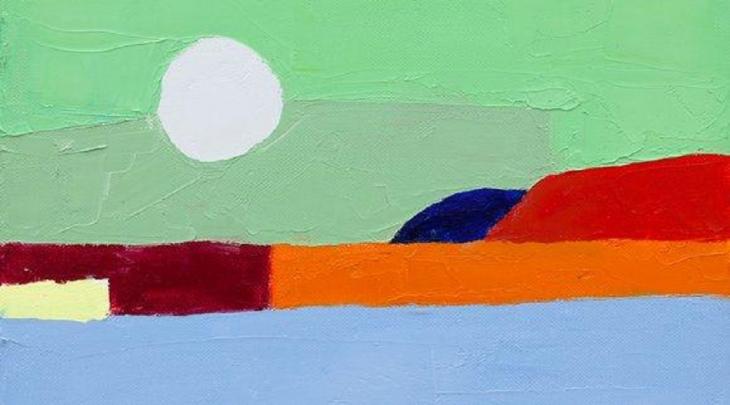 Sheer colour: "Etel Adnan did not create paintings; she created colour. It is as if the colours hover above the canvas, trying to catch your eye. Her gift was to inject colour into the eyes of the beholder, rose-tinting this cruel world with childhood, wonderment and love," writes Elias Khoury

An artist of Beirut

Despite her many identities, Etel was very much an artist of Beirut. Strange like the city itself and yet familiar like its sea: Syrian, Greek, Turkish, Francophone and Anglophone. In fact, she combined all these identities in a rhythm that was both Arabic and Beiruti. Thus, she spoke to the depths of our humanity in ways that were new and amazing with every word, with every stroke of the brush, and with every beating wing.

Her and Simone's home in Beirut was a free space. Right there, at the bottom of the "Little Mountain" [ed. Ashrafieh], from a balcony overlooking Beirut port, it is as if we were discovering the world anew. Etel resembled nothing and no-one except her art and her poetry. I always wondered how she could be an artist 24/7. Didn’t she ever get tired?

For her, art, poetry and writing were a way of life rather than a means of self-expression. Colours were suffused with life, radiating light and playing on the words, however ordinary they might be, as part of a possible poem about to be penned.

I don't know why I was surprised at my grief for the death of a woman who will never die.

Do we have the right to plumb the depths of sorrow, when someone who is not meant to go, bids us farewell?

Has that person left us if we still have visions of their paintings? If we hear the echo of their words deep within us?

Death is truth’s biggest lie. It is as real as it is an illusion, or an idiom.

Perhaps the sense of grief was all the more overwhelming because Etel died in the midst of Beirut's own tragic and barbaric death. She perished just as she was watching how words die in a city whose name was once synonymous with words.

The artist and poet Etel Adnan wasn’t Lebanese, and yet hers became one of the names of Beirut. The city was forged by the likes of Adnan who chose the cosmopolitan port looking out onto the unknown to sketch a city that embraces the gamut of Arab ennui – the city of poets, artists, the marginalised and refugees.

Ever since it developed into a modern city, Beirut has been laced with contradictions, but its character and its essence were established in the Lebanese and Arab creative adventure, which charted a course for freedom.

Mourning the death of a woman who will never die, we fear for our city; it has fallen at the mercy of the merciless and it is suffering alone.

Etel Adnan did not depart Beirut when she left.

She bore all the pain, blending it with innocence while the innocent were being killed. Our astonishment at what is still unfolding has mutated into our astonishment at the sociopathic imagination of the tyrants, at the hunger of those who are bloodthirsty for power, and at the brutality of the local warlords and tycoons.

I wipe the sadness from my eyes, and I see a cloud suffused with colour and the rhythm of new words.

Do poets turn into clouds when they die?

Do colours turn into birds flying out of a painting to fill the void in our lives?

Is death but a metaphor for life?

I'm asking you, dear lady, why don't you answer?

Elias Khoury, born 1948 in Beirut, is a novelist, playwright, literary critic, editor and lives in Beirut. He is one of the leading writers and intellectuals in the Arab world and author of ten novels and three plays.

Research project "The Global Qur'an", brainchild of Professor of Islamic Studies Johanna Pink and sponsored by the European Research Council, analyses the history and ... END_OF_DOCUMENT_TOKEN_TO_BE_REPLACED

As the Western world emerges from a holiday season made less festive by COVID-19, millions of children in Afghanistan are starting 2022 facing the prospect of famine, illness, and ... END_OF_DOCUMENT_TOKEN_TO_BE_REPLACED

A wedding extravaganza of bright colours, flowers, feasting and dancing, yet the bride, Nefie Eminkova, who comes from Bulgaria's Pomak – Muslim – minority, can see none of it. ... END_OF_DOCUMENT_TOKEN_TO_BE_REPLACED

Every year in December, the team at Qantara.de takes a look back at the articles that proved most popular with our readers. This year is no different. Here is a run-down of the ... END_OF_DOCUMENT_TOKEN_TO_BE_REPLACED

Jesus – Issa in Arabic – doesn’t merely enjoy the highest place among the prophets in the Koran. He is also revered in Islam’s mystical tradition for his message of love and mercy ... END_OF_DOCUMENT_TOKEN_TO_BE_REPLACED

The military in Sudan has never waged war against a neighbour, but it has already staged 17 coups. Tens of thousands of people are risking their lives to oust the military by ... END_OF_DOCUMENT_TOKEN_TO_BE_REPLACED
Author:
Elias Khoury
Date:
Mail:
Send via mail

END_OF_DOCUMENT_TOKEN_TO_BE_REPLACED
Social media
and networks
Subscribe to our
newsletter