Ethiopia: the murals of Alaba

Alaba in southern Ethiopia, just a two-hour drive from Addis Ababa, has yet to be discovered by tourists. Those who do pass through the area rarely stop. The local population is mainly Muslim. Yet both Muslim and Christian communities have a special propensity for painting their house walls. By Eric Lafforgue 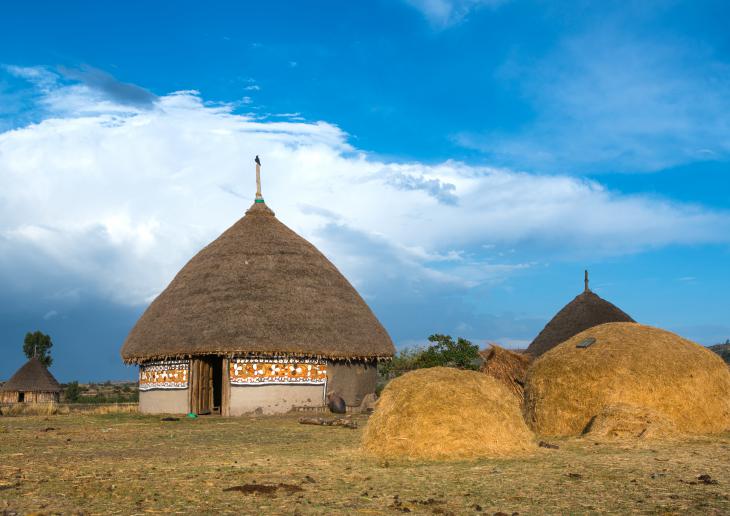 For the farmers of Alaba, decorating their houses – both inside and outside – is a long established tradition. The style is truly unique, depicting the home owner′s likes, his life, his religion or his dreams Inside, the only light comes through the small door – the tiny windows are rarely opened. The beds are made of adobe, the mattresses of straw. The house is decorated on the side where people live 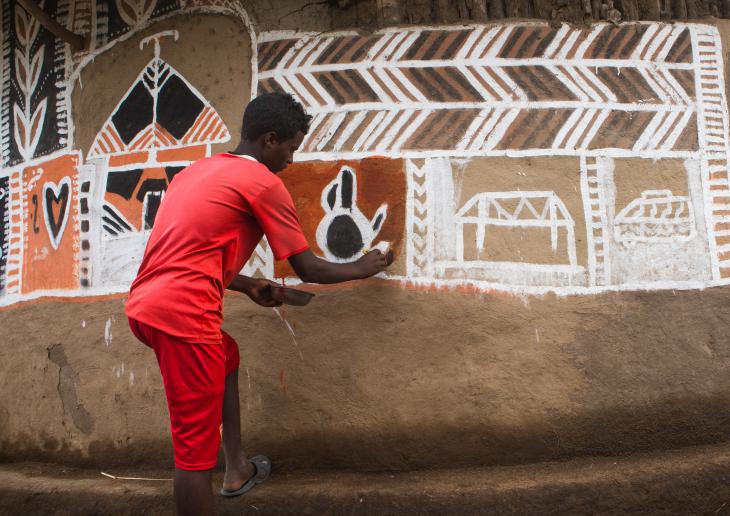 Rejevo may be only 17, but he has already made a name for himself as a painter. As taught by the elders, he uses only natural pigments. Black, white and red are traditional mural colours. He paints for both Muslims and Christians. When asked to paint something with which he is unfamiliar, such as the Kaaba in Mecca, he surfs the Internet to find out what it looks like 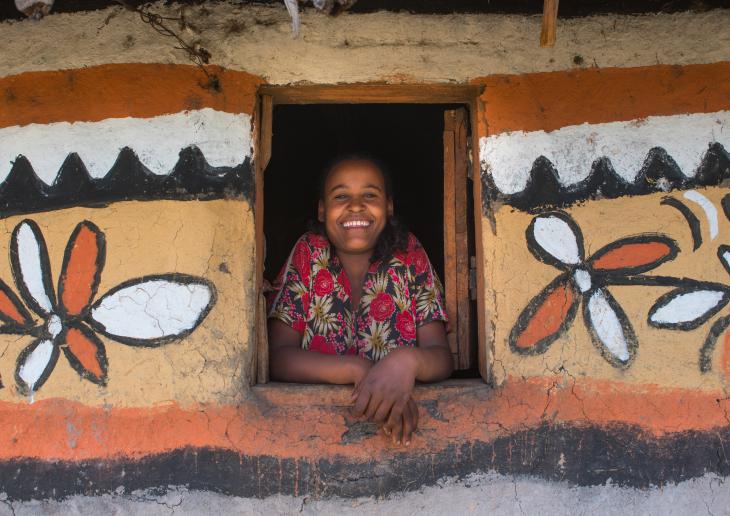 Flowers are a motif common to all the houses. Not only are they beautiful, they are also easy to paint, meaning they are not as expensive! 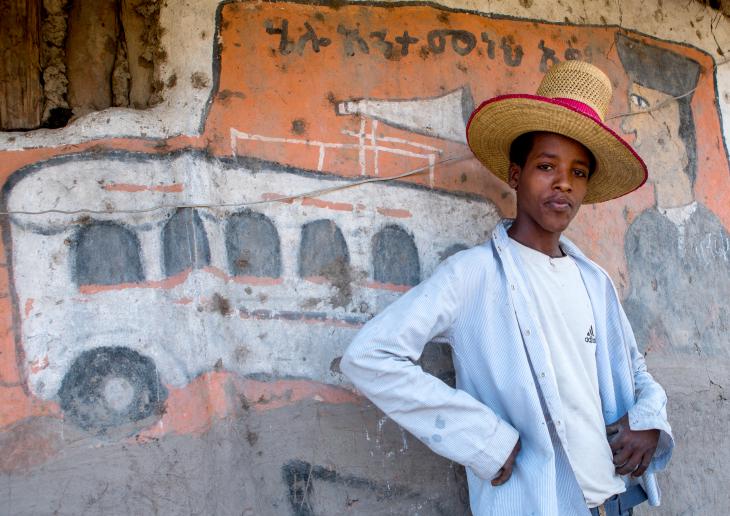 The walls are home to people′s dreams and wishes. This young man had a bus painted on his wall because he dreams of buying one and selling tickets to passengers as a means of supplementing his farmer′s income 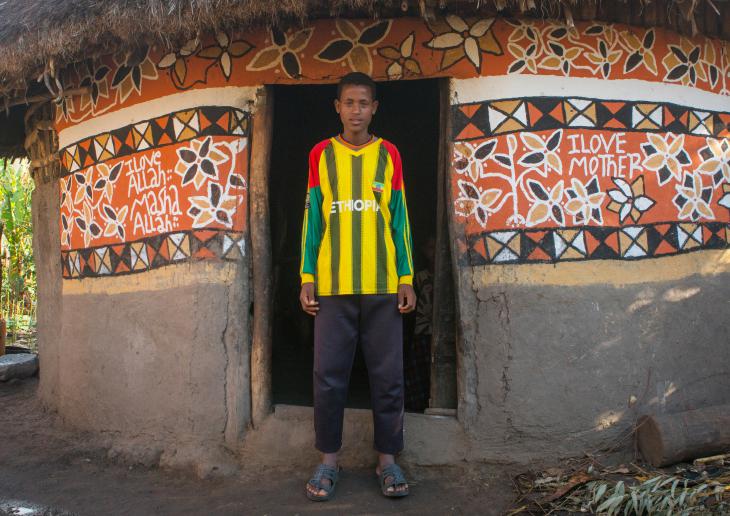 An increasing number of people are choosing to have personal messages written on their walls, as a way of showing their religion or simply expressing their feelings. This young man says that it is his Facebook 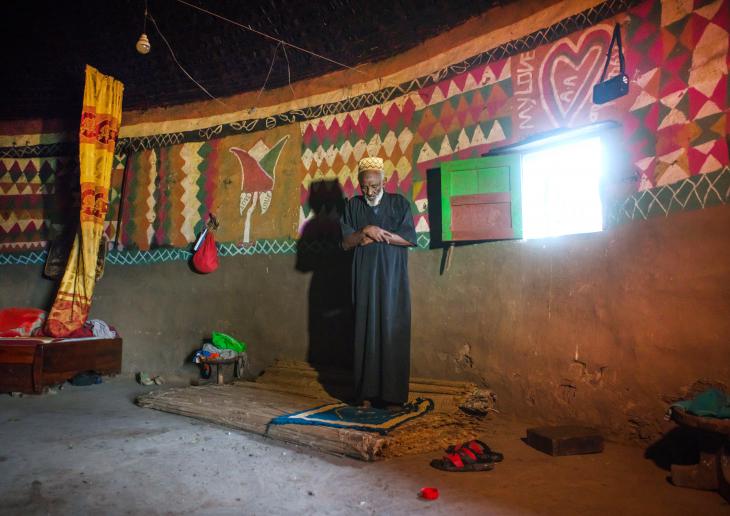 A Muslim man at prayer inside his house. The walls are not decorated with religious symbols – his wife preferred to have flowers and motifs associated with love 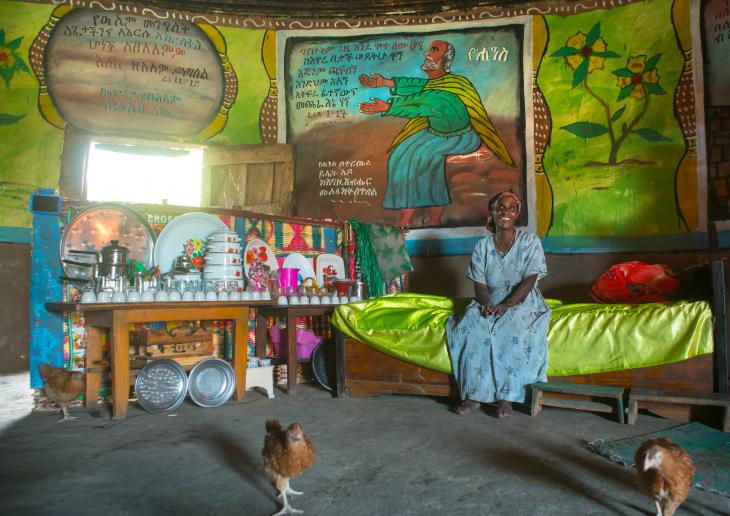 This Christian woman′s house boasts a huge mural. She has carefully chosen her bed sheets to match the painting. She owns a large collection of coffee cups, a local tradition showing that you can welcome a lot of people in your home 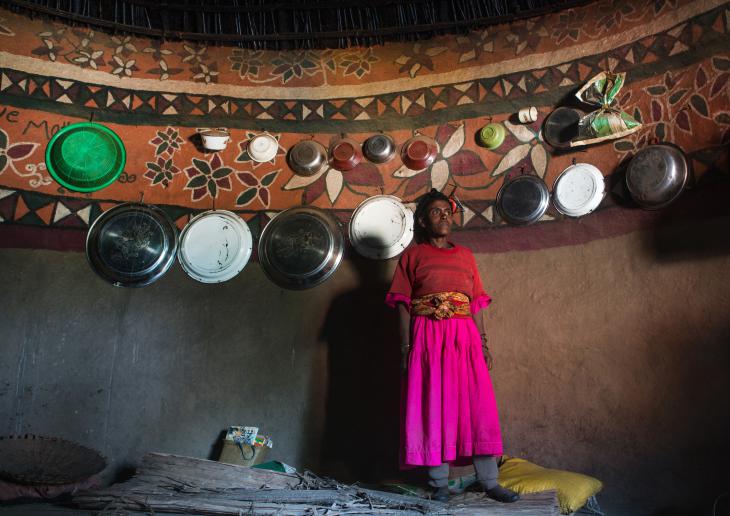 As in other parts of Ethiopia, people like decorating their walls with the plates, pots and trays they use for cooking. Most of them were received as wedding gifts 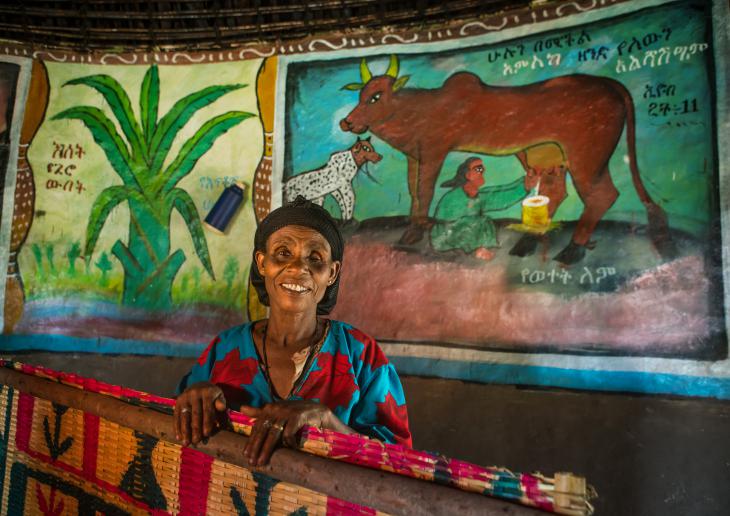 Daily life is depicted on many walls. Seen on the right is milking, the first task of the day for the farmers. On the left is enset – a plant native to Ethiopia known as ″fake banana″. Thanks to its edible roots, it ensures food security for millions of Ethiopians every day 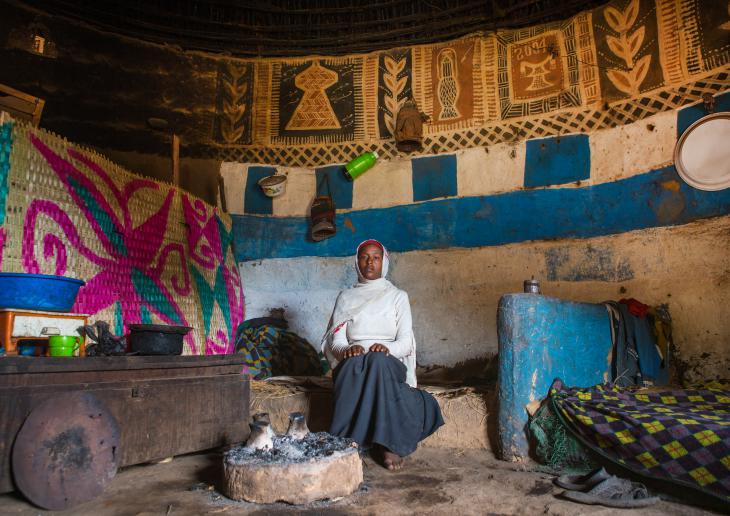 Above this woman are the main items that people use in the region: an injera basket (the local bread made with teff), a milk churn and a wooden pillow Every newly-built house is decorated and painted by a local artist. People also paint news decorations for important celebrations such as the Christian festival of Christmas or the Muslim holiday of Arafat. Since heavy rains tend to destroy the paintings, they have a limited life-span A heavily-decorated house is a sign of wealth in the Alaba community, first and foremost, however, the effect is intended to be visually pleasing Some locals hoped the paintings could become a source of income and started taking care of their houses, particularly those living on the Addis road, which has became a commercial trunk road. But very few tourists stop. This woman sees an average of three cars stopping every week... In recent years, religious posters have begun appearing on the walls. For many, they could signal the end of the traditional paintings – the posters cost less and last longer…

END_OF_DOCUMENT_TOKEN_TO_BE_REPLACED
Social media
and networks
Subscribe to our
newsletter