Sheikh Hussein is a town in the Oromia region in south-eastern Ethiopia. The tomb of the 13th century Sufi Sheikh Hussein who introduced Islam to the area and is said to have performed many miracles is still visited by thousands of people. By Eric Lafforgue 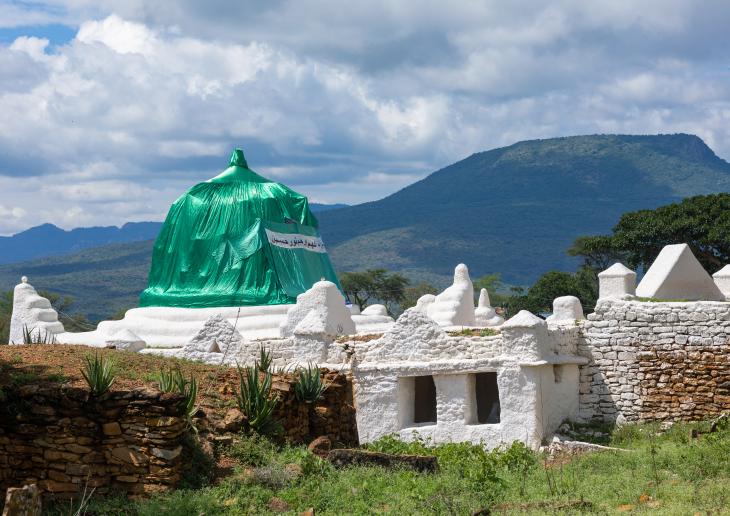 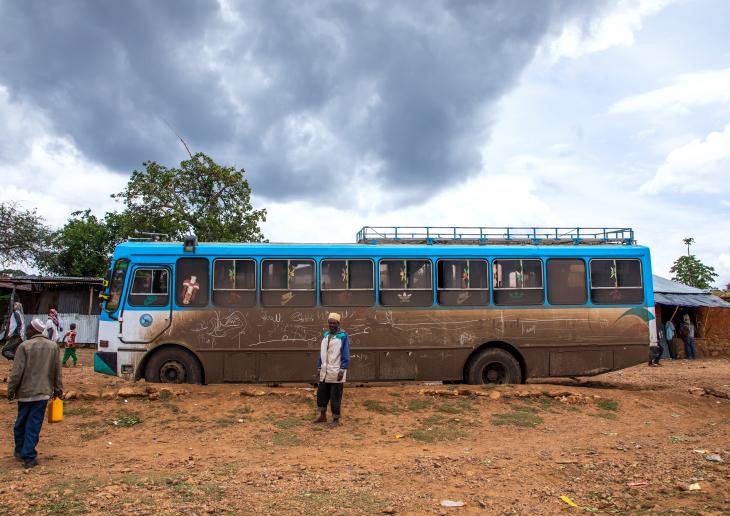 Tens of thousands of people from eastern, southern and western Oromia, various parts of Ethiopia, Sudan, Somalia, and Djibouti visit the shrine. The area is remote and two days of muddy roads are necessary to reach the place of pilgrimage 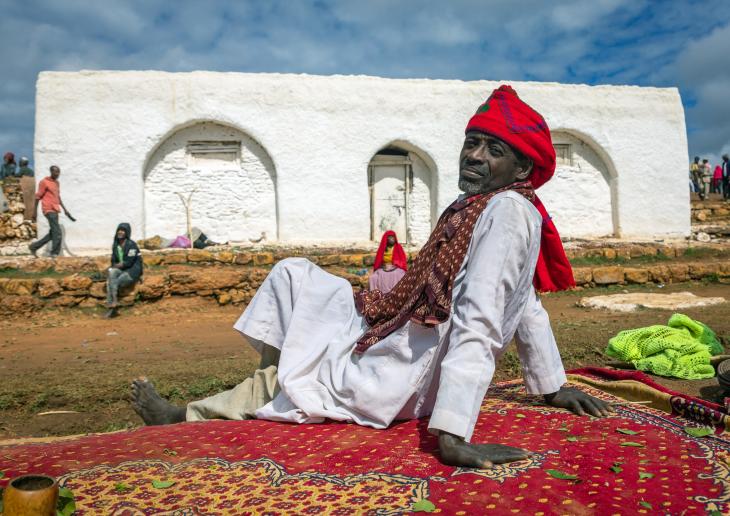 You need to be barefoot to enter the holy area. Once inside, everybody respects the law: there is no thieving, fighting, loud music or insults. The atmosphere very relaxed. A deep-seated tradition of tolerance enables Muslims and even Christians to attend the gathering 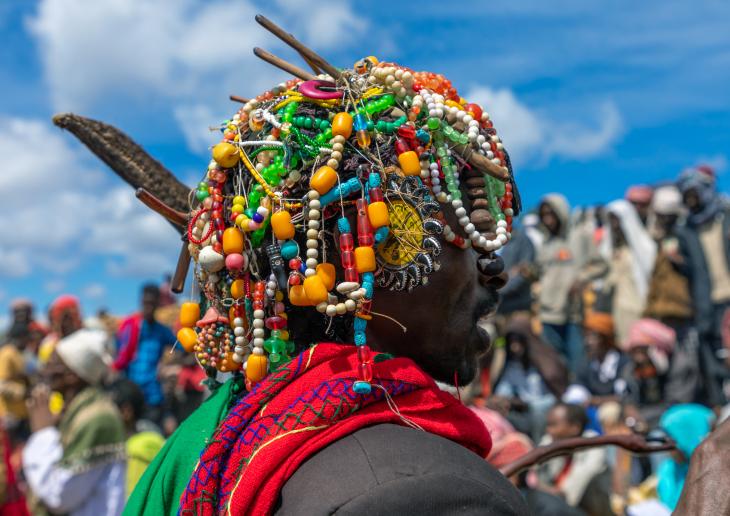 During the pilgrimage, the Oromo Sufi sheikhs wear ornate wigs made of necklaces and prayer beads. The larger the wig, the greater their devotion to Hussein. The elders enjoy great prestige in the community: here, Sheikh Feisal welcomes his guests with honey, a huge sign of respect 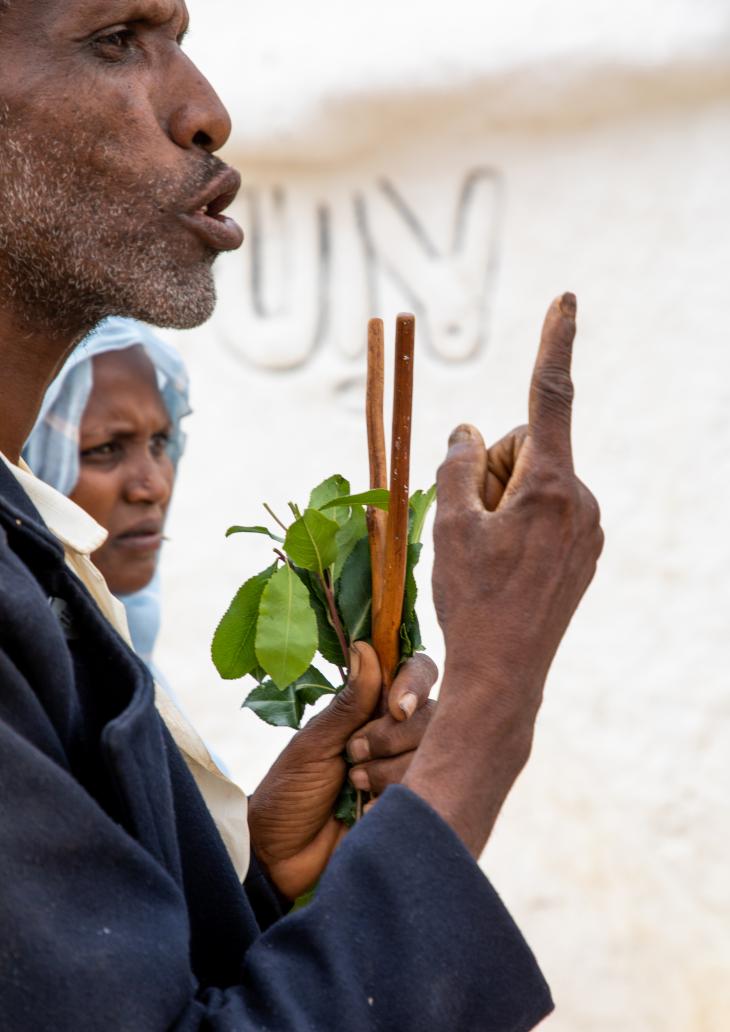 Y-shaped wooden sticks are to be found everywhere during the gathering. They are called ʹhanqeeʹ and are replicas of Sheikh Husseinʹs walking stick. Pilgrims regard it as a symbol of peace and love. Sheikh Hussein is reported to have done miracles with his hanqee. Lots of shops sell them on the way to the shrine 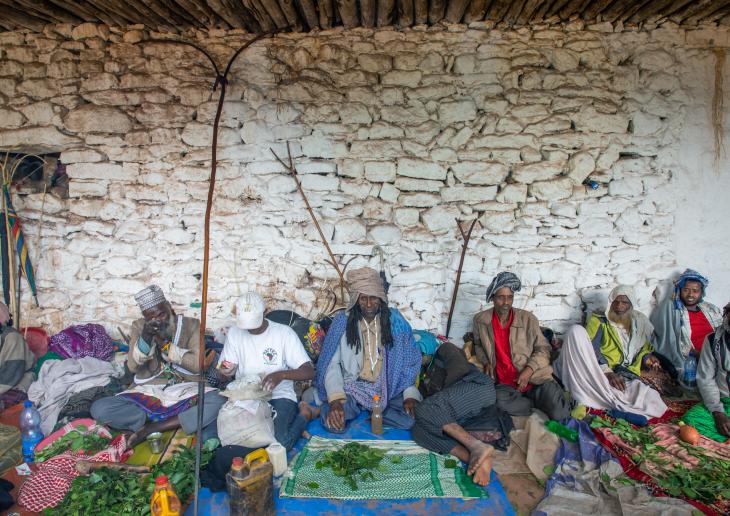 The pilgrims live under shelters, praying around their sheikhs, like these people from Jima. But the main activity remains chewing khat in a haze of frankincense. Khat is a leafy plant which acts as a stimulant when chewed and is supposed to open the mind. That effect is quickly replaced, however, by mild dysphoria, anxiety, reactive depression, insomnia and – in extreme cases – anorexia 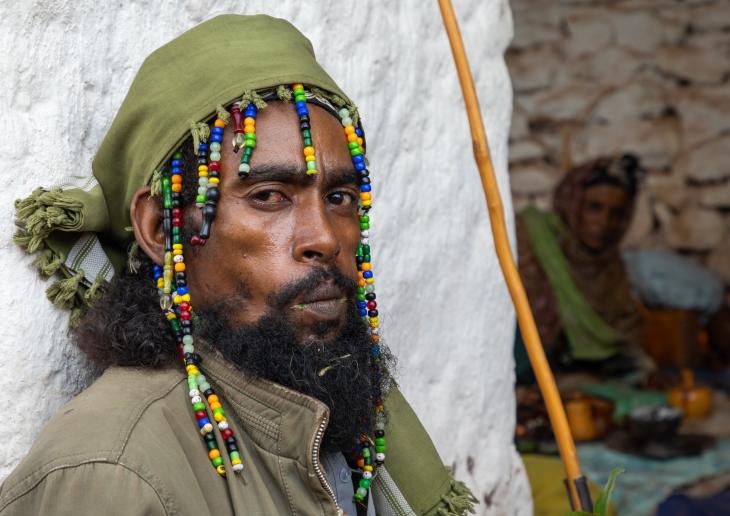 Every pilgrim leader is allotted a special task during the celebrations. Some are responsible for the dances, some for the prayers, while others watch the gates leading to the shrines 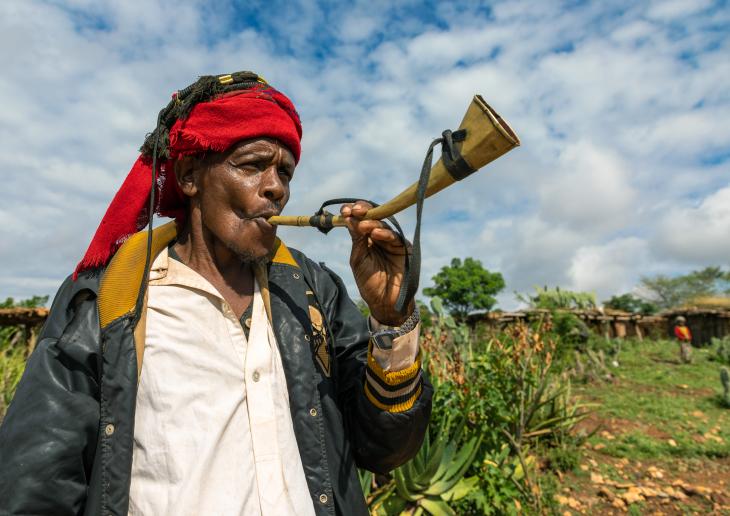 A keeper of the shrines blows a horn to gather the pilgrims for a celebration. Ceremonies occur around the clock, with groups vying for the attention of pilgrims – the more visits, the greater the prestige 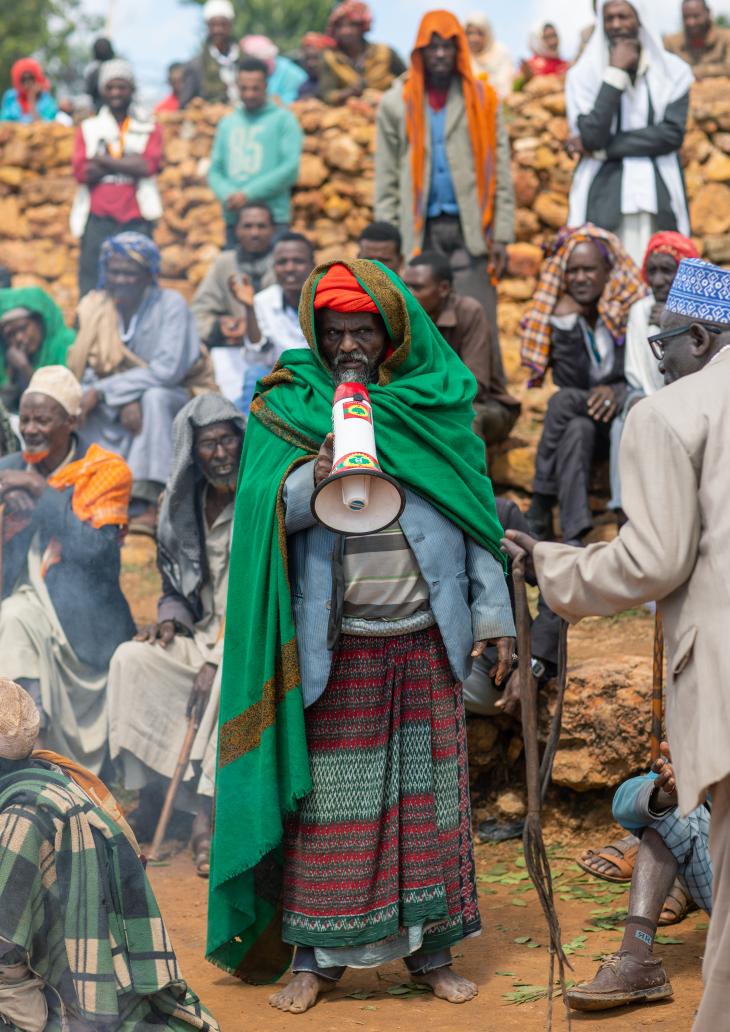 One major practice in the local cult is the singing of songs in praise of Sheikh Hussein, called ʹbaarooʹ. Singers bellow loudly into megaphones, attracting pilgrims who give them food, water and khat as an expression of their gratitude 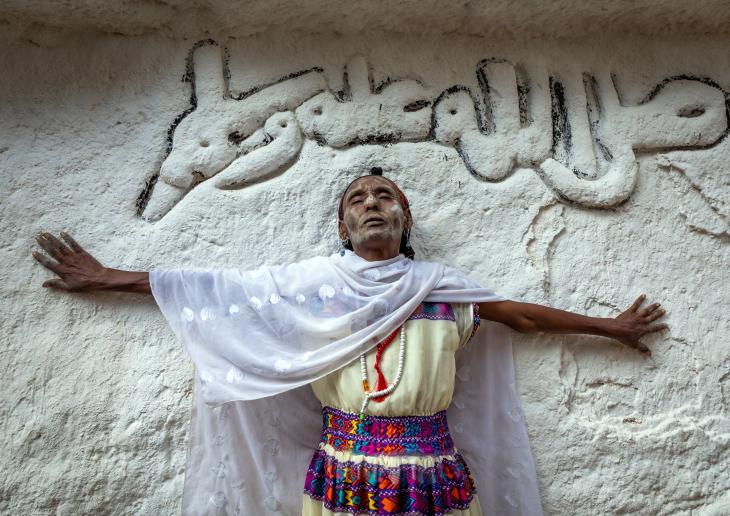 The white walls of the shrines are decorated with huge inscriptions taken from the Koran. Pilgrims spend time going from gate to gate, entering the shrines through little doors. If a Muslim cannot afford to visit Mecca, he can visit Sheikh Hussein, known by Ethiopiaʹs Islamic community as ʹLittle Meccaʹ 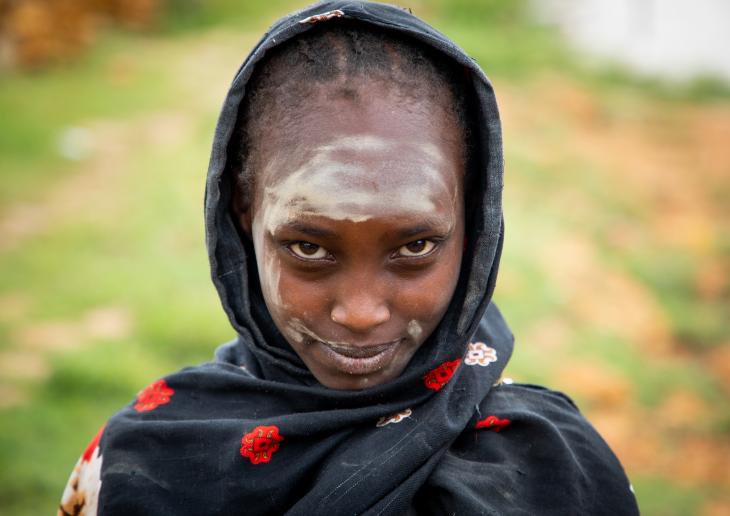 Children paint their faces with ʹjarawaʹ – whitish limestone powder reputed to have magical powers that is found in a cave eight kilometres from the shrine. Adults can be spotted eating it for the same reason. The water from the local ponds is also sacred: the pilgrims drink it and use it for their ablutions 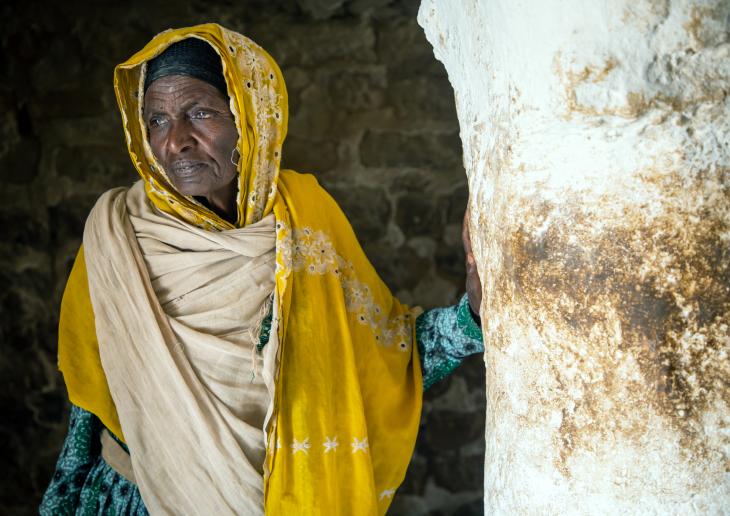 Since the pilgrims regard Hussein as a divine intercessor, many pray for a solution to their health problems, for professional success or the well-being of their family. Sheikh Hussein is a place where pilgrims exercise a mixture of Islamic religion and African traditional belief, known as ʹmudaʹ 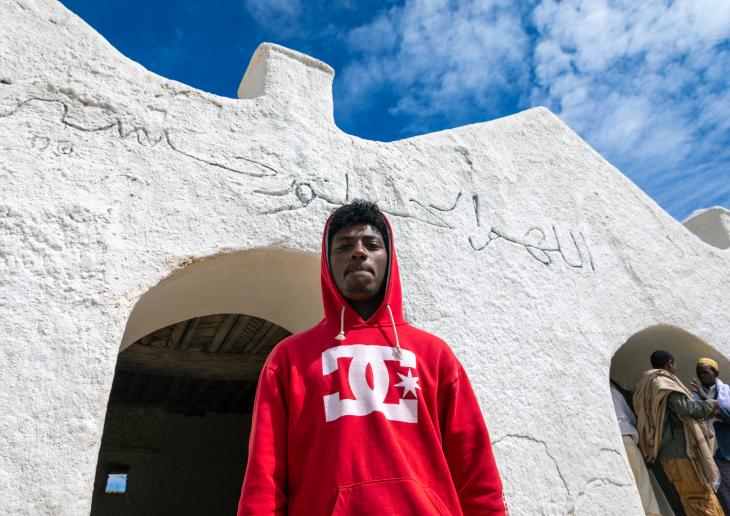 The celebrations of Sheikh Hussein are under constant threat from extremists. Adherents to the Sheikh Hussein cult often face social marginalisation. Harassment and the destruction of shrines has led to a decline in the numbers of pilgrims 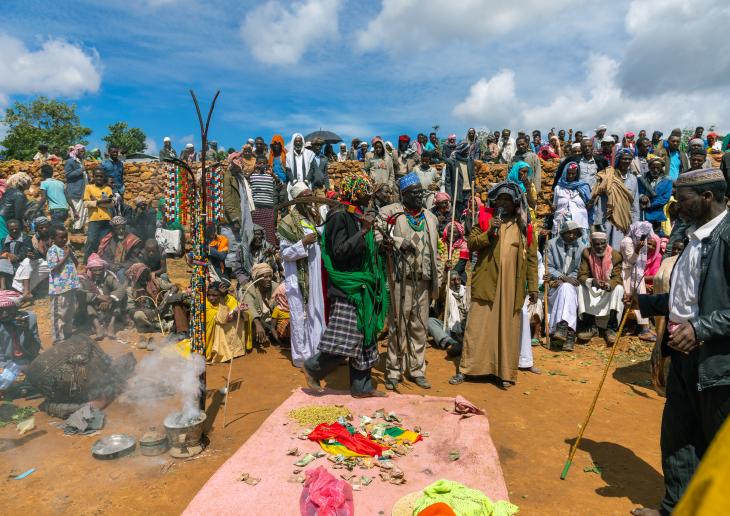 The pilgrimage is a time of prayer, but also of donations and offerings. The event attracts hundreds of beggars, blind people and humpbacks who collect small notes or coins from the visitors. The wealthiest pilgrims offer camels, goats or cattle in sacrifice and the meat is shared among the community 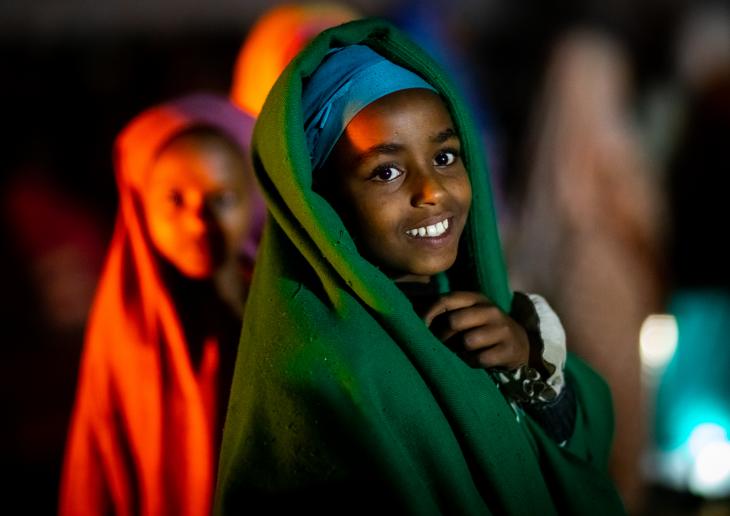 The Sheikh Hussein cult is a living tradition that could soon be classified by UNESCO. Although it is not yet on the permanent list of World Heritage sites, it has made it onto the provisional list. That in itself is something of a miracle, considering how far off the beaten tourist track it is!

END_OF_DOCUMENT_TOKEN_TO_BE_REPLACED
Social media
and networks
Subscribe to our
newsletter