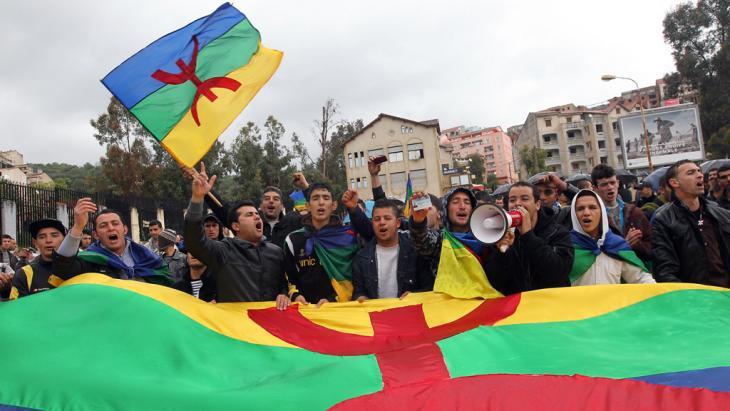 Ethnic conflict in Algeria
A struggle for power and recognition

Algeria's non-Arab minorities are up in arms. The ethnic conflict between Arabs and Berbers is weakening the already fragile stability of the Maghreb state. By Susanne Kaiser

They feel discriminated against, socially disadvantaged, politically marginalised and fear the loss of their land due to a steady increase in new settlers. The "they" in question here are not the Palestinians in the West Bank or East Jerusalem, but the Mozabite people in Algeria. They are at the centre of a conflict that has been brewing for decades and finally transitioned into open violence at the end of last year. No one can say for certain whether the dispute's root causes are ethnic, religious or social.

Ghardaia is the capital of Ghardaia Province in the M'zab Valley, which lies 600 kilometres south of Algiers, the capital of the country. The region is the gateway to the Sahara and, currently, a stage for heavy unrest. Homes and businesses have been plundered or burned down, cemeteries and sacred sites defiled and centuries-old mausoleums destroyed. Armed clashes between generally young men from the Mozabite group on the one hand and the Chaamba tribe on the other are a regular occurrence. Such clashes sometimes even result in lynching.

The dispute is about land, living space, water, access to public offices, institutions and privileges as well as jobs and integration. A catastrophically high youth unemployment rate and a constantly deteriorating economic situation also contribute to the tension.

Mozabites are among the Algerian groups known as Berbers or Imazighen – both terms that are problematic and not viewed as suitable by all members of the ethnic groups in question. They belong to the Ibadi religious minority and, traditionally, lived and worked as merchants in the M'zab, where they also form the majority population. 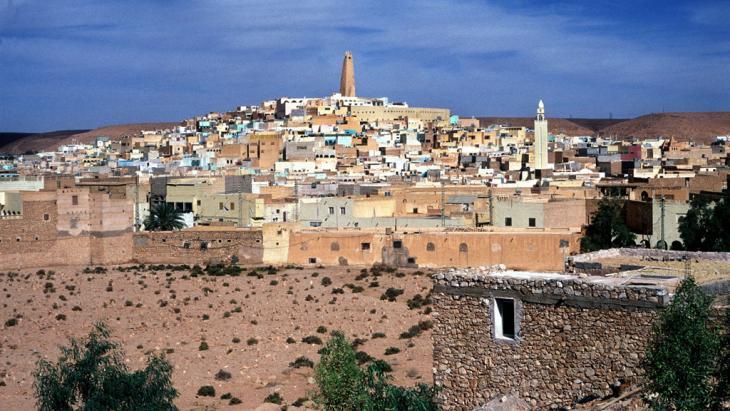 A deep divide separates the country's ethnic and religious groups: in Ghardaia, the Mozabites and the Chaamba both accuse one another of marginalisation. Since December 2013, seven people have been killed and around 400 injured in fighting in the M'zab region

The Chaamba, on the other hand, see themselves as Arabs and as followers of the Maliki approach to Islamic law. They used to be Bedouins who mainly made a living breeding camels until they were forced to give up their nomadic life first by colonialist policy and then by the Algerian policies of President Houari Boumediene following the country's independence in 1962. They too settled in the M'zab.

Both groups accuse one another of marginalisation. The Chaamba say the Mozabites have used exclusive social structures and their own schools, mosques and cemeteries to hamper the integration of the Chaamba, with whom they want no relations.

For their part, the Mozabites say the Chaamba marched in arrogantly and, as Arabs, get preferential treatment from the Algerian government in the form of easier access to administrative jobs or living space. The Mozabites also feel that the construction of more and more new villages and districts by the Arab newcomers is systematically displacing them and threatening their identity.

"Essentially, the Arab population confronts ethnic minorities with a sense of superiority," says Ulrich Delius, a specialist on African affairs with the Society for Threatened Peoples, speaking to Qantara.de. He goes on to say that this is a result of 50 years of Arabisation policies that have led Arab Algerians not to see their state as a multi-ethnic place with room for Berber communities, but solely as an Arab nation.

"There are no Berbers in the Arab Maghreb"

There is a tradition of nationalist Arabisation policies and the marginalisation of Berbers across the Maghreb. Since the mid-twentieth century and independence from the colonial powers, the states of the Maghreb have pursued this agenda with varying degrees of intensity. Above all, it can be seen as the reaction on the part of young nationalists to French colonialists' attempts to split the population with its divide et impera (divide and conquer) approach.

In Morocco in 1930, the colonialist administration issued the so-called "Dahir berbère" (Berber edict), which established different legal treatment for Berbers, thereby cementing ethnic divisions. Describing the Berbers as "late-converted Muslims," the differentiation was also intended to suggest that the French could bring them into the Christian fold more easily, whereas the Arabs were seen as a lost cause. 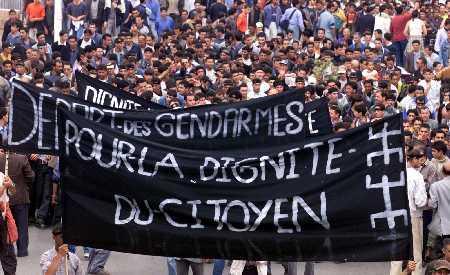 Fighting back against Arabisation and Islamic integration: in June 2001, hundreds of thousands of Berbers from the Kabylie region took part in a "March for Democracy" in Algiers, the country's capital, where they demanded more representation in the political process and respect for their rights

In Gaddafi's Libya, the existence of non-Arab peoples was simply denied as part of the concept of the Jamahiriya mass state. "We are all Libyans" was the former dictator's famous credo.

Algerians also largely disregarded the ethnic identities, cultures and languages of non-Arab communities and of the Kabyle people, in particular. "There are no Berbers in the Arab Maghreb … They have been completely arabised," wrote Algerian Fadil al-Wartilani, a militant anti-colonialist thinker who had close ties to the Muslim Brotherhood. Throughout the region, Berber names were made to sound Arabic, which was made the sole official language. Berbers were denied their cultural and ethnic independence and spoken of as if they were just an element of folklore. Their languages were discounted as mere dialects. Protests against these attempts at homogenisation were treated as a betrayal of the Arab nation and sympathy for the former colonial powers.

Various Berber communities have being resisting their oppression for quite some time now, and clashes occur with regularity. One example came in early 1980 when a peaceful protest in the Kabylie region was put down by a massive military operation. It went down in history as the "Berber Spring".

The so-called Black Spring of 2001 is also fresh in many people's minds. During it, security forces shot dead more than 100 members of the Kabyle minority.

The ongoing conflicts in Ghardaia mean that explosive social and political situations are likely to arise again in the future. Even now, it is apparent that the Algerian state's lack of action in response to unrest constitutes an additional threat to the country's dearly paid for stability.

Home
Print
Newsletter
More on this topic
Algeria and the Arab Spring: Opting for the Status Quo Rather than ExperimentationInterview with the Algerian Singer Houria Aïchi: Ambassador of Chaouia CulturePhoto gallery: The Conflict in Western Sahara – The Eternal Wait
Related Topics
Algerian Opposition, Berbers | Amazighs, Human rights, Minorities in the Muslim world
All Topics

Algeria‘s regime is again cracking down on anti-fracking activists and the unemployed in the country‘s south. Yet EU countries remain keen to scale up their energy cooperation ... END_OF_DOCUMENT_TOKEN_TO_BE_REPLACED

Algeria's decision to unilaterally sever diplomatic ties with Morocco in August 2021 – days after the presidency announced in a statement their relations would be reviewed – was ... END_OF_DOCUMENT_TOKEN_TO_BE_REPLACED

Madrid's about-face on the Western Sahara conflict has enraged Algeria. Trade relations have been frozen unilaterally and a cut in gas supplies to Europe could be in the pipeline ... END_OF_DOCUMENT_TOKEN_TO_BE_REPLACED

Sultana Khaya, 41, has been peacefully resisting the Moroccan occupation of Western Sahara for many years. Because of her campaign to assert the self-determination of the Sahrawi ... END_OF_DOCUMENT_TOKEN_TO_BE_REPLACED

Since Spain abandoned its traditional neutrality towards the conflict in Western Sahara, Morocco has announced a "new phase" in relations between the two countries. But what is ... END_OF_DOCUMENT_TOKEN_TO_BE_REPLACED

An increasing number of government ministries in Algeria are announcing they will abandon French in future. They may be reacting to the mood among the population, but the move is ... END_OF_DOCUMENT_TOKEN_TO_BE_REPLACED
Author:
Susanne Kaiser
Date:
Mail:
Send via mail

END_OF_DOCUMENT_TOKEN_TO_BE_REPLACED
Social media
and networks
Subscribe to our
newsletter