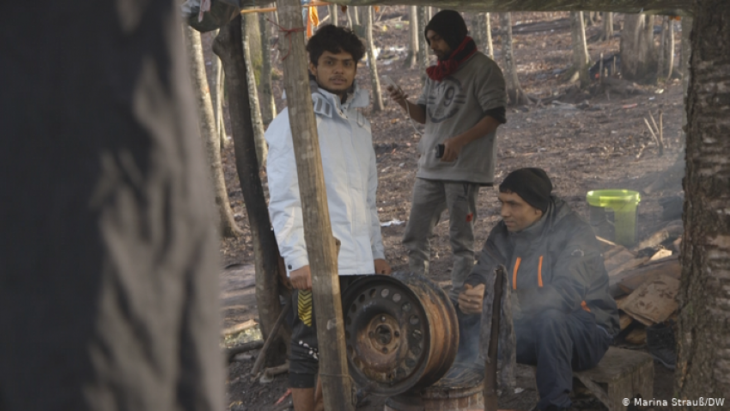 Twenty-five-year-old Raheel Zafar from Karachi, Pakistan, said he had already tried to walk from Bosnia & Herzegovina to Croatia six times, through the forest and across the mountains. He was stopped each time by the Croatian border police, who beat him and robbed him.

Each of the 30 men who have set up camp here in a forest outside the Bosnian town of Velika Kladusa has a similar story to tell. In front of every tent, two or three people sit warming themselves or cooking over small fires.

Zafar, who is wearing plastic slippers, leads the way around the camp. Half the people here are refugees from Pakistan, half from Bangladesh. Together they have built a mosque out of sheets of plastic, with prayer rugs inside. The entrance is very muddy, as it is everywhere in the camp. It rained overnight, and it's supposed to get colder at the weekend, with more snow on the way. 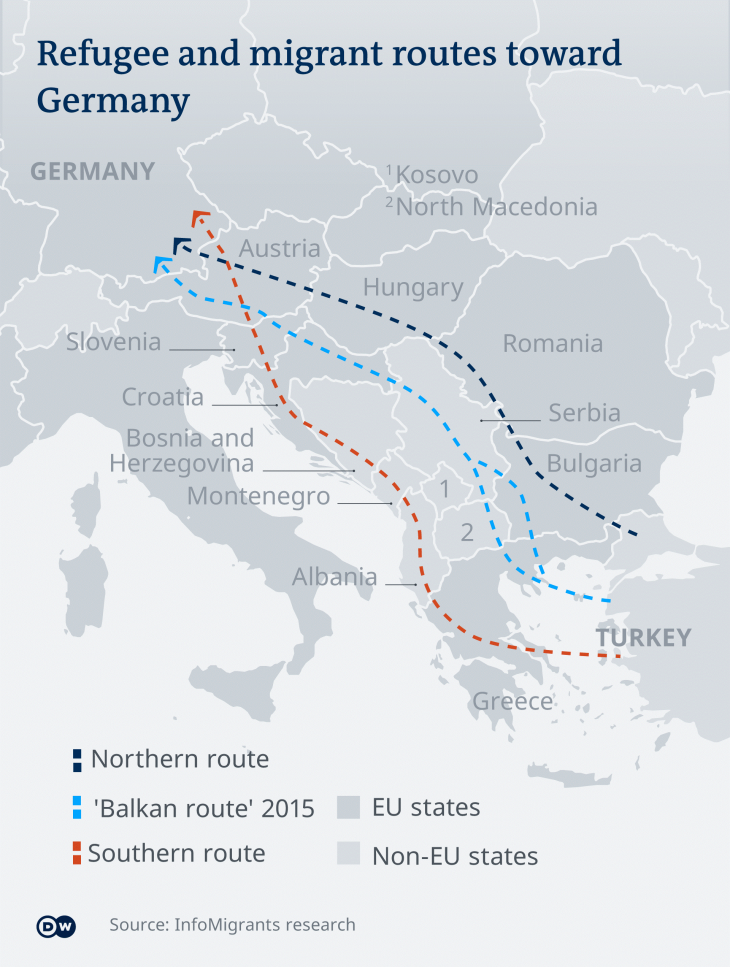 Defunct EU migration policy: Bosnia's border town Velika Kladusa is a migrant hotspot where thousands of people fleeing Asia, the Middle East and Africa are stranded on the fringe of the wealthy bloc, trying and often failing to enter and continue their journey. Bosnia was mostly bypassed during the mass migrant movements across the Balkans in 2015-2016, but in recent years the country has become a key transit route after EU countries closed their borders to new arrivals

There is some accommodation in Bosnia & Herzegovina, but not enough to house all the refugees – around 8,000 – currently in the country. Some, like Raheel Zafar, say they prefer being here to in a hostel, where he's afraid others will rob him.

Zafar is also here because it's only a few kilometres from Velika Kladusa to the Croatian border – and, more importantly, the external border of the European Union. Like almost all the migrants here, Zafar doesn't want to stay in Bosnia; he wants to go to Germany, Italy or Sweden. Zafar is sure that everything will be better as soon as he's in Frankfurt with his friends – not like here in the mud, and not like in Pakistan, where he couldn't see any future.

Following the great movement of refugees in 2015, EU countries such as Hungary effectively closed their borders, which is why more people have been trying to enter the EU via Bosnia & Herzegovina ever since. And some of them do make it, despite the Croatian border police. There are spots in the forest camp where tents used to be, now marked by just a few muddy stakes sticking out of the ground. Those left behind tell themselves their former neighbours are in Italy now.

Just over 25 years ago Bosnia & Herzegovina itself was at war. There are many people here who know what it is to flee your home. Some, though, have had enough of the migrants in their border region. 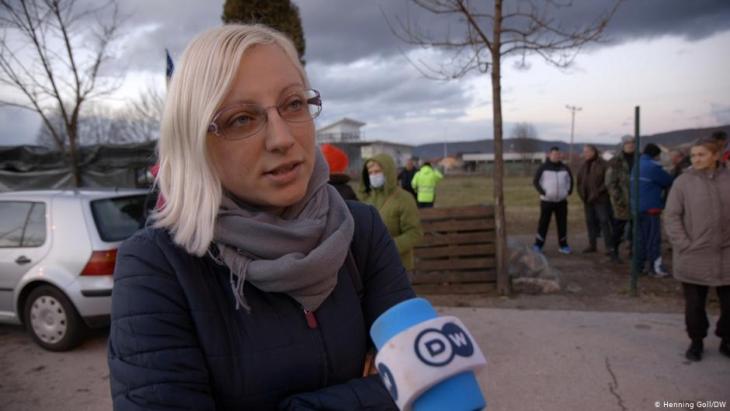 Local residents are determined to prevent refugees moving back into the accommodation in their neighbourhood, even though the authorities have assured them that that isn't going to happen: "We're not racists," says this woman, who does not wish to be named. "But they don't want to stay here anyway. They want to go to Europe. So, dear EU: open your borders and take them in"

The Bira refugee hostel in Bihac, an hour's drive south of Velika Kladusa, closed down a while ago. But that has not stopped one local woman with long, bleached blonde hair from demonstrating outside it for months, along with several dozen others. The group has set up a little camp of its own, where they grill sausages, hand out cans of Fanta, and exchange stories about migrants they say stole from them, or used their front gardens as toilets.

All of them are determined to prevent refugees moving back into the accommodation in their neighbourhood, even though the authorities have assured them that that isn't going to happen. "We're not racists," says the blonde woman, who does not want to give her name. "But they don't want to stay here anyway. They want to go to Europe. So, dear EU: open your borders and take them in."

Suhret Fazlic, the mayor of Bihac, also blames the EU for the current situation. But he is critical of the state government in Sarajevo as well. Many in Bihac and the surrounding canton of Una-Sana, here at the border with the EU, feel their government has abandoned them to provide for and accommodate the refugees themselves.

Fazlic says the EU's attitude to refugee and asylum issues is hypocritical and its funding often misplaced. "During the migration crisis, the EU paid out so much money for Bosnia – but Bihac never saw a single euro. We had to manage with our own resources," Fazlic said at the town hall.

According the European Commission, the EU has paid more than €88 million ($108 million) since 2018 – either directly to Bosnia & Herzegovina, or to partner organizations taking care of refugees on the ground. One of these partners is the International Organization for Migration (IOM). But shortly before Christmas, the IOM closed its Lipa camp 30 kilometres from Bihac. The organisation says it closed the camp in protest against the Bosnian authorities' refusal to make the accommodation winterproof.

Indeed, the camp was only meant to be a temporary measure anyway: Lipa was opened in April 2020 because of the COVID-19 pandemic, as an interim solution for the summer.

Camp Lipa almost completely burned down shortly after it was cleared, after which more than 1,000 people returned and sought refuge in the forest, or built makeshift shelters on the site. Now the Bosnian army has put up new tents, but many of the refugees say they're completely inadequate.

Ashfaq Ahmed, from Pakistani-controlled Kashmir, dreams of studying medicine in Germany. He points over at the military-green tents. Several people are dragging mattresses and bedframes inside. We're not animals, he says: "This is no place to live – especially not at this time of year."

Home
Print
Newsletter
More on this topic
Refugee crisis on the Greek-Turkish border: Europe's liberal warriors put democracy to the swordHundreds of migrants freezing in heavy snow in Bosnia campGreece and the asylum-seekers: How do you solve a problem like Moria?Refugee crisis in Europe: The price of European indifference
Related Topics
European Union (EU), Human rights, Humanitarian aid, Immigration, Migration, Policy on refugees and migration, Refugees
All Topics

Many marriages to British Asian men are accompanied by false promises of improved finances. Later when the men abandon their wives to return to the UK, some brides' families find ... END_OF_DOCUMENT_TOKEN_TO_BE_REPLACED

Global heating is driving domestic migration in Bangladesh, which sits just above sea level. With a population of 160 million, it is the most densely populated nation in the world ... END_OF_DOCUMENT_TOKEN_TO_BE_REPLACED

As Qatar prepares to host the 2022 FIFA World Cup, the country has come under fire for its treatment of migrant workers, with some nations calling for a boycott of the contest. ... END_OF_DOCUMENT_TOKEN_TO_BE_REPLACED

Urban transport concepts in the global South, often promoted by organisations such as the World Bank, aim to encourage motorised private transport – at the expense of non- ... END_OF_DOCUMENT_TOKEN_TO_BE_REPLACED

Authorities in Bangladesh started sending a first group of more than 1,500 Rohingya refugees to the isolated island of Bhasan Char, despite calls by human rights groups for a halt ... END_OF_DOCUMENT_TOKEN_TO_BE_REPLACED

French President Macron's statements that caricatures of Muhammad may still be published have triggered outrage in a number of Muslim states. Turkish President Erdogan is among ... END_OF_DOCUMENT_TOKEN_TO_BE_REPLACED
Author:
Marina Strauss
Date:
Mail:
Send via mail

END_OF_DOCUMENT_TOKEN_TO_BE_REPLACED
Social media
and networks
Subscribe to our
newsletter