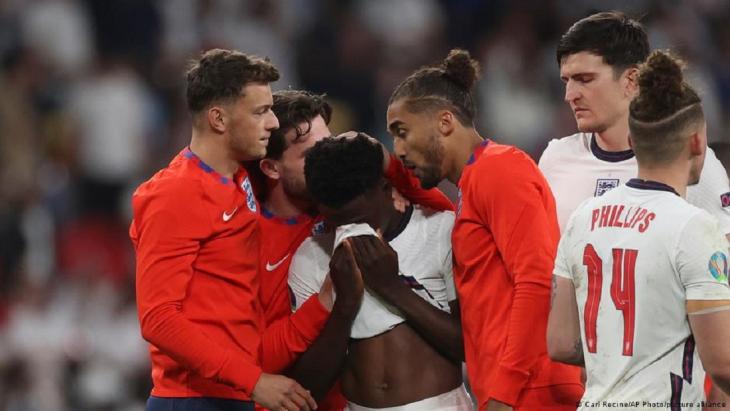 EURO 2020: Racism in football
Racists, not missed penalties, are the problem

The final defeat against Italy hurt England – but the racist insults against Saka, Sancho and Rashford were far more painful, revealing the deep rift running through English society. Commentary by Joscha Weber

If they win, they are heroes. If they lose, they are apes. For some, it is so simple. And so contemptuous of humanity. What was unleashed on social media after the missed penalties by Bukayo Saka, Jadon Sancho and Marcus Rashford was more than mere frustration over a narrowly lost European Cup final against Italy. It was an embarrassment for England that far eclipsed yet another failure in a penalty shoot-out.

You can lose, but not like this. Moments after Bukayo Saka shot the ball halfway high into the right corner and Italy keeper Gianluigi Donnarumma brilliantly parried it, the messages of hate popped up: monkey emojis, plus bananas, gorillas and chimpanzees appeared in the comments to posts on Saka's Instagram account. There are countless of them. Saka is now going "home to Africa", wrote one Twitter user. Other messages are so disgusting they don't bear repeating.

Solidarity with Jadon Sancho, Marcus Rashford and Bukayo Saka. The racist abuse directed towards these three brilliant young England players is a disgrace. Boris Johnson and Priti Patel take note. This is why the England players take a stand against racism #SayNoToRacism pic.twitter.com/B7lkWJiWT8

Even some support for the three black players seems strange: "You can't attack them like that when they have done so much for their country," someone wrote on Twitter. And what about the black people who – according to whomever – have done "less" for England? Are they allowed to be insulted?

Racism, as this traumatic final night for the motherland of football shows, is still a problem in England and in sport. Despite all the appeals, campaigns and denials. The hatred is there. And if scapegoats are needed in the face of a painful defeat, a few young, black players will do.

The fact that earlier in the game, other English players also made mistakes – think back to their chaotic defensive behaviour when Leonardo Bonucci scored the equaliser for Italy – doesn't count. The selective perception of many "fans" shows how deep-rooted racial prejudice still is. Not only in England, by the way, as the treatment of Mesut Ozil in Germany also revealed.

It is true that monkey noises and racist chants of abuse in the stadium have become rare in many places, thanks in part to the opposition put up by the active fan scene. And the three unfortunate penalty takers have received a lot of solidarity from broad swathes of English society.

Even the youngest are still affected

But in the apparent anonymity of social networks, racism lives on. It is still unarguably part of British society, even among the youngest: 95 percent of black young people surveyed in a late 2020 study said they had already experienced racist statements at school, 78 percent in the workplace.

This England team deserve to be lauded as heroes, not racially abused on social media.

Those responsible for this appalling abuse should be ashamed of themselves.

And while nearly two-thirds of Britons think racism occurs on a large or significant scale in society, the Conservative government has tried to downplay the problem in a detailed report that says inequality and discrimination are more about socio-economic disadvantage than skin colour. A fatal misjudgement, according to experts from the United Nations.

So when Prime Minister Boris Johnson now condemns the racist insults as "shameful", he is sending the right signal in the fight against discrimination. But the question remains why he and his government are not putting up more of a fight against racism in everyday life. It is sorely needed. And not only in the case of three up-and-coming football stars.

Her grandparents are Jews – born in Tunisia and Algeria. Director Cleo Cohen has now broken the silence about this with a very personal debut. By Nadine Wojcik END_OF_DOCUMENT_TOKEN_TO_BE_REPLACED

Life imprisonment for crimes against humanity: that was the sentence handed down to Anwar Raslan in the world's first trial of a member of the Syrian torture system. Matthias von ... END_OF_DOCUMENT_TOKEN_TO_BE_REPLACED

Every year in December, the team at Qantara.de takes a look back at the articles that proved most popular with our readers. This year is no different. Here is a run-down of the ... END_OF_DOCUMENT_TOKEN_TO_BE_REPLACED

With his new album, "A Voice Keeps Calling Me", the Persian santur player Kioomars Musayyebi is building bridges from Iran across the Arab world to European early music. By Stefan ... END_OF_DOCUMENT_TOKEN_TO_BE_REPLACED

Former lawyer Said Haider has invented a chatbot for those seeking advice on anti-discrimination issues – Meta is the first chatbot of its kind in the world. In conversation with ... END_OF_DOCUMENT_TOKEN_TO_BE_REPLACED

Benjamin Idriz, imam of the mosque in Penzberg near Munich, is one of the most prominent representatives of Islam in Germany. He sees his role as building bridges to mainstream ... END_OF_DOCUMENT_TOKEN_TO_BE_REPLACED
Author:
Joscha Weber
Date:
Mail:
Send via mail

END_OF_DOCUMENT_TOKEN_TO_BE_REPLACED
Social media
and networks
Subscribe to our
newsletter