No Free Trade in Sight

One of the aims of the "Euro-Mediterranean Partnership" launched in 1995, was to establish a regional free trade zone by the year 2010. But the North African partner countries still have a long way to go in that direction. Bernhard Schmid explains the background

One of the aims of the "Euro-Mediterranean Partnership" launched in 1995, alongside peace and stability in the region, was to establish a regional free trade zone by the year 2010. But the North African partner countries still have a long way to go in that direction. Bernhard Schmid explains the background 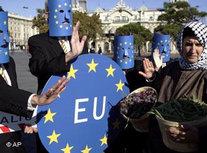 ​​It seems like a bit of a déjà-vu: the Mediterranean is back on the political agenda in various EU countries. France's new president Nicolas Sarkozy and his Italian counterpart Romano Prodi announced in Paris on 28 May that they'd be giving a new priority to relations between Europe and the Mediterranean region in the near future.

At a press conference reporting on a meeting between the two heads of state, Prodi declared that seven "Euro-Mediterranean" states would be forming a joint conference. Sarkozy and Prodi listed their own countries, Spain and Portugal – although the latter does not border on the Mediterranean – Greece, Cyprus and Malta.

The goal of the joint efforts is apparently the formation of a "Mediterranean Union" together with the countries bordering the sea to the south and east. But haven't we heard this before? Yes! The "Euro-Mediterranean dialogue", launched with much pomp and circumstance twelve years ago.

The "Euro-Mediterranean Conference", held in Barcelona on 27 and 28 November 1995, gave the green light for the foundation of a free trade zone around the Mediterranean, accompanied by numerous promises of "intercultural cooperation" and breaking down prejudices.

The main instrument was to be bilateral agreements between the EU and individual countries on the south and east coasts of the Mediterranean. Agreements have since been concluded with all the states involved in the "Barcelona process", with the exception of Syria.

On an economic level, the integration process was originally supposed to work towards the establishment of a regional free trade area by 2010. The participating states were promised lasting economic growth through rising exports.

But critics fear that the removal of former protectionist barriers means that many local industries could be "flattened" by the EU competition – as they are less competitive than industry in the north.

So far, this process is in its early stages. At the moment the relocation of industrial and service centres to economic "niches" of Tunisia and Morocco, for example, which joined the process early on, plays more of a role.

Setbacks in the local agriculture sector

Outsourced call centres set up by European companies now form an important branch of the economy in these two states. Morocco and Tunisia climbed from 4.7 percent of turnover in the French call centre industry in 2003 to 11.5 percent in 2005. 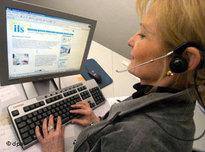 ​​Investment is mainly concentrated on this type of "niche" area and in the tertiary sector rather than key industries. In principle, a free trade zone is still conceivable, but the promised results are severely behind schedule.

Growth in Morocco, for instance, although certainly a factor in the past two years – at 6 percent in 2006 with a significant fall in unemployment – is dependent on tourism. The industrial sector, in contrast, is still lagging behind.

There are several factors behind this. Firstly, Morocco and Tunisia, the first two countries to conclude agreements with the EU in 1996, had strong textile industries until recently.

Since the expiry of the "Multi Fibre Agreement" at the end of 2004, which restricted worldwide textile exports, this sector has come under increasing pressure. The huge competition from China has been the main blow, with the textile giant mounting an export offensive. However, Tunisia's local textile sector has stood up to this "steam roller" much better than many observers had initially feared.

The second factor is severe setbacks in the local agriculture sector in recent times. Admittedly, this has less to do with economic relations between the Maghreb states and the EU, and more with the drought of the past two years.

That has meant that the dispute between Morocco and Tunisia on one side and the EU states on the other has not been particularly sharp in recent times. Import quotas and barriers

But the structural conflict has not gone away. The two North African countries would like to extend their share of agricultural products exported to the EU free from duties, but these goods are subject to strict import quotas.

On the other side Spain in particular, which competes with similar products on the EU market, insists that these quota must not be not raised. As Moroccan and Tunisian farmers have had poor harvests due to hot, dry weather in the past year, the issue has not come up.

Intended investment registered in all North African countries climbed sharply in 2005 and 2006. In Algeria, gradually recovering from its economic decline during the civil war since the beginning of the decade, has even seen a six-fold increase in investment since 2001.

But there has been a clear shift. The dominant investors – at least for planned investments, which do of course have to come to fruition – are no longer from the EU. At the moment most investors come from the Arab Gulf States, to a lesser extent from Egypt and East Asia.

China is among the rising investment stars. Chinese companies are currently involved in numerous infrastructural construction projects in Algeria, for example in the housing and roads sector – often bringing their own workers with them.

Many Chinese workers sleep in containers directly on or next to the building sites, working on a three-shift basis. The Algiers government now often favours Chinese companies for cost reasons, but also because of the feared risk of corruption when commissioning local companies.

The Gulf States and Egyptians are investing strongly in telecommunications, for instance the expansion of the mobile telephony sector.

It is essentially a welcome development that the rate of "south-south trade" is growing and the individual Mediterranean states are no longer reliant on a solely bilateral relationship with Europe. This may well dampen the arrogance the EU often displays when dealing with the southern Mediterranean states. 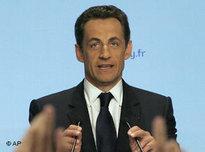 The talk of a new "Mediterranean Union" is also a way for president Nicolas Sarkozy to keep Turkey out of the EU, says Bernhard Schmid

​​But there are also many ugly sides to the Chinese mode of industrialisation. Chinese industry has repeated many negative phenomena of the European industrialisation process in the course of its "catching up", and is based on hyper-intensive exploitation of human labour.

Some EU governments appear to have noticed that they are running the risk of losing political and economic ground on the other side of the Mediterranean. And this is part of the reason behind Sarkozy and Prodi's new Mediterranean policy.

But there is another background to their initiative on the domestic policy side. Nicolas Sarkozy first floated his idea of a new "Mediterranean Union" in a speech held in Toulon on 7 February, in which he attempted to rehabilitate broad parts of France's 20th century colonial policy.

To some extent at least, Sarkozy is maintaining political and ideological links to this past. The choice of location was no coincidence, as the city of Toulon in the south of France is one of the areas where many former French Algerians were settled after Algerian independence in 1962.

And the talk of a new "Mediterranean Union" is also a way for the French president to keep Turkey out of the EU. Sarkozy is an outspoken opponent of Turkey joining the European Union.

He has thus consciously launched the idea of a new "union" as a counter-proposal to possible integration into the EU for Turkey and other countries, to block that option. And these kinds of ulterior motives will certainly not help foster a true "partnership".

10 Years Barcelona Process
Mixed Results
With currently 25 EU members and 10 Mediterranean countries participating in the project, the Barcelona process is something of a diplomatic masterwork in European multilateralism. Ten years after its initiation, Isabel Schäfer takes stock

Interview Hélène Flautre
"The EU is Not the Teacher in Terms of Democracy"
Hélène Flautre, French MEP for the European Greens, bemoans the double standards of European policy in the democratisation of the Southern Mediterranean countries. She also insists on the need to establish effective measures to pressurise them into changing

Arab Globalisation Critics on the G8
"It Is Imperative to Have a New Economic Order!"
How do Arab globalisation critics regard the G8 and relation to the problems of the developing nations? Ahmad Hissou discussed this issue with Nahid Badawiyyah, Syria, Ibrahim Obaha, Morocco, and Lutz Rogler, Germany