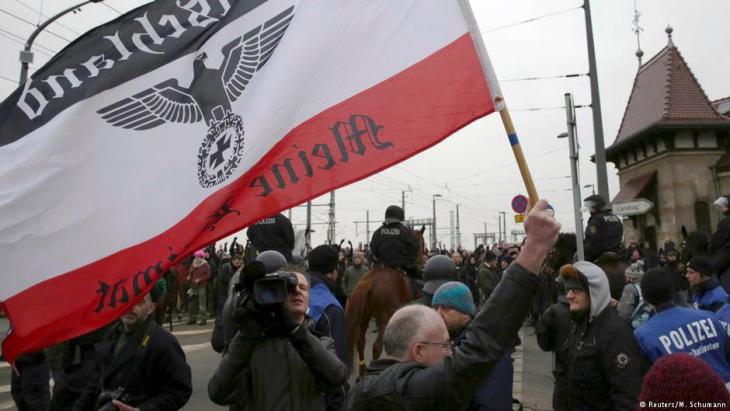 Europe, Germany and ″Abendland″ angst
In the name of Christendom

Appropriated by the National Socialists and revived by the German far right, the term ″Abendland″ is laden with negative associations. Yet, Alexander Goerlach argues, it′s not too late to reclaim it

Europe is being torn apart; divided by the aftershocks of the financial crisis, Europeans seem able to find common ground only in a common enemy. To hear Geert Wilders of the Netherlands or the U.K. Independence Party in Britain tell it, the crisis is not just about refugees: the influx of primarily Muslims is a threat to Western civilisation itself, on par with the Arab invasions of the seventh century and the Ottoman invasions of the 16th.

It′s no coincidence that my country, Germany, has also seen a resurgence of a once-common, but more recently discarded, term: ″das Abendland″. In English it is usually translated as ″the Occident″, but its literal translation is quite poetic: ″the Evening Land″. The far right uses it as a synonym for Western Europe and its values; the anti-immigrant movement that sprung up at the height of the refugee crisis, usually referred to by its acronym PEGIDA, is known in full as Patriotische Europaer gegen die Islamisierung des Abendlandes (″Patriotic Europeans Against the Islamicisation of the West″).

The term didn′t always have a sinister ring to it. Philosophy majors may recognise it from the German title of Oswald Spengler′s 1918-22 opus ″Der Untergang des Abendlands″, usually translated, not quite accurately, as ″The Decline of the West″ (″Untergang″ more accurately translates as ″Downfall″).

Before that, ″Abendland″ was commonly used in the 19th century in connection with the rediscovery of the German past, specifically the music and architecture of the medieval period. The past and the homeland, ″Heimat″, blurred together into the notion of a romantic Western European past, the Abendland, becoming a cultural and psychological bulwark against the disenfranchising anonymity of urban industrialisation.

In defence of "the West"

The Nazis, playing on those same sentiments in the 1920s and ′30s, appropriated ″Abendland″ for their own dark purposes. As much as the Nazis tried to refashion German society, they also positioned themselves as defenders of a pure Western European past: Hitler was the heir to Charlemagne and the Nazis claimed to be the only ones able to defend the West against Jews and Soviet communism. 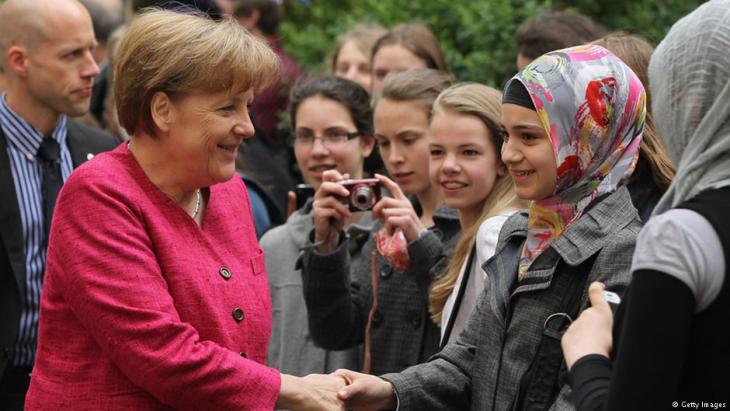 An irrational fear: "dislike of Muslims is often strongest where immigrant populations are the smallest. PEGIDA′s base is Dresden, where the foreign population is slightly less than 2 percent. Surely, the rapid integration of a million immigrants would pose a great challenge to any society. But Muslims are despised more as a scapegoat, a vessel for society′s worries," writes Goerlach

Today′s German far right makes a similar claim, vowing to undertake the ″rescue of the Abendland″, though this time not from the Bolsheviks, but from the Muslims. And a general declinist angst is found among more than just the far right: in a time when de-industrialisation, globalisation, automation and rapid technological change are having a jarring effect on European society, many Germans of all stripes are once again seeing the end of their world at hand.

It′s an odd sort of angst, since Germany has in fact done very well for itself over the last 15 years and is one of the few countries in Europe to have benefited from globalisation. Unemployment is near record lows. But angst doesn′t have to be rational, or empirical — indeed, polls show that people hostile to immigrants have typically done better than average financially, but also have above-average fears of what′s to come.

Likewise, dislike of Muslims is often strongest where immigrant populations are the smallest. PEGIDA′s base is Dresden, where the foreign population is slightly less than 2 percent. Surely, the rapid integration of a million immigrants would pose a great challenge to any society. But Muslims are despised more as a scapegoat, a vessel for society′s worries. The fear of the future is the same sort of irrational fear that made medieval Germans put sculptures of mythical creatures on the western facade of their cathedrals.

What does the West mean?

For all the talk about European integration over the last 50 years, the last two years have shown how ingrained certain instincts are in Western Europe. Blaming the other and putting up walls to enforce homogeneity drove Charlemagne′s vision to unite the German tribes under the new Christian religion; his creation was called the Holy Roman Empire for a reason. It is the same longing for homogeneity that drove whole countries to either remain Catholic or become Protestant in the Reformation; subjects had the choice to stick to their ruler′s religion or emigrate. 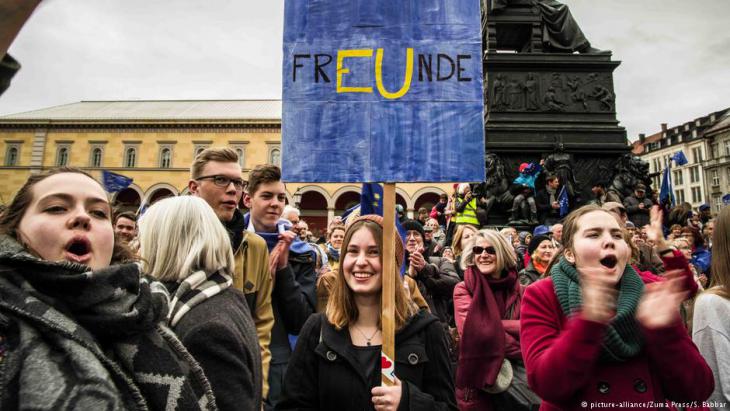 Pulse of Europe is a pro-European citizen's initiative, founded in Frankfurt, Germany, by the end of 2016. It aims at "encouraging citizens of the European Union to speak out publicly in favour of a pan-European identity". As Europe is facing democratic deficits, the imminent Brexit as well as the growing popularity of right-wing populist and nationalist political parties, the initiative aims at counteracting euroscepticism

Today, of course, Europe is a largely secular place. But if faith doesn′t motivate, Christianity as a place holder for other Western values still does. It is part of Western Europe′s identity and a tool for identifying the other.

One could argue that ″Abendland″ as a term is forever poisoned. But its popularity on the far right also reveals the terms of the fight that has played out in the Brexit vote and the recent Dutch elections and will recur in France and Germany later this year. It is not a fight to defend the West, but a fight over what the West means.

″Abendland″ doesn′t have to mean xenophobia and exclusion; it can mean openness and liberal tolerance. If PEGIDA and similar movements have taken hold of ″Abendland″ for the moment, that just means it′s time for their opponents to take it back.

Alexander Goerlach is a visiting scholar at the Center for European Studies at Harvard.

Home
Print
Newsletter
More on this topic
Non-fiction: ″Angst ums Abendland″ by Daniel Bax: The apocalyptics of the WestMona Siddiqui on Brexit, Muslims and the migrant issue: How do you welcome someone?Right-wing extremism and Islamophobia in Germany: Sending out a political signal
Related Topics
AfD | Alternative for Germany, European Islam, European Union (EU), Integration in Germany, Islam in Europe, Muslims in the West, Pegida, Right-wing populism
All Topics

Despite what heads of state may claim, the Russian attack on Ukraine is not a wake-up call for a self-confident Europe that defends its values. The war is accelerating the decline ... END_OF_DOCUMENT_TOKEN_TO_BE_REPLACED

At the EU's outer borders, the right of migrants to a fair asylum procedure continues to be systematically disregarded. Take Greece, for example: in the worst case scenario, those ... END_OF_DOCUMENT_TOKEN_TO_BE_REPLACED

Madrid's about-face on the Western Sahara conflict has enraged Algeria. Trade relations have been frozen unilaterally and a cut in gas supplies to Europe could be in the pipeline ... END_OF_DOCUMENT_TOKEN_TO_BE_REPLACED

Mourad al-Marouai was just nine when a landmine killed him on a beach in war-torn Yemen, a tragedy that will haunt his family forever. After a swim, the little boy "suddenly ... END_OF_DOCUMENT_TOKEN_TO_BE_REPLACED

A ceasefire has been in effect in Libya for the past year and a half. Yet after Russia's attack on Ukraine, another proxy war looms in Africa's most oil-rich country. Mirco ... END_OF_DOCUMENT_TOKEN_TO_BE_REPLACED

The Ukraine war has seen energy prices spike with oil producers in the Middle East making more money than ever. But will it put the brakes on long-planned reforms to diversify oil ... END_OF_DOCUMENT_TOKEN_TO_BE_REPLACED
Author:
Alexander Goerlach
Date:
Mail:
Send via mail

END_OF_DOCUMENT_TOKEN_TO_BE_REPLACED
Social media
and networks
Subscribe to our
newsletter