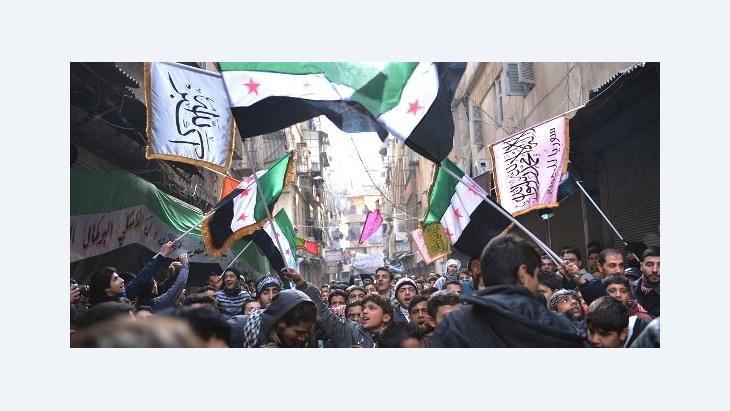 European Policy on Syria
The Time for Caution is Past

In view of the suffering and the destruction in Syria and the reticence of the US, the Europeans must assume more responsibility. They should expedite the reconstruction of liberated territories, bolster the National Coalition, finance rebels fighting for a democratic Syria and apply diplomatic pressure to pave the way for a political transition, says Kristin Helberg

Damascus may appear to be a city on an alien planet when viewed from Washington, but for Berlin, Paris, Rome and Athens, Syria is pretty much on the doorstep (unlike Mali). If this is why US President Barack Obama believes his nation can do nothing more in Syria than help with the distribution of food, clothing and medicaments, then it is the responsibility of the Europeans to act even more decisively.

Several things need to be happening at the same time. The liberated regions in the northeast of the country need humanitarian aid and support in the establishment of alternative state structures. This necessitates swift, unbureaucratic and creative solutions.

With the help of international NGOs and the local councils that have been set up in many places, EU representatives can establish what the population is lacking and how they can help to set up a functioning administration. Bakeries need flour, garbage trucks and ambulances need fuel and replacement parts, hospitals need medical equipment and staff, and schools need new windows, furniture and heating oil.

In the medium-term, priority should be given to stimulating the economy and not to the distribution of alms – helping people to help themselves, instead of creating dependence and frustration. 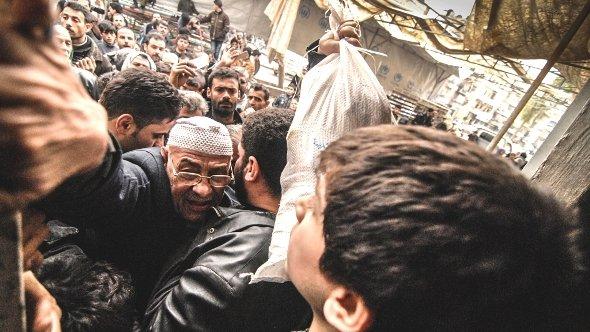 "If President Barack Obama believes his nation can do nothing more in Syria than help with the distribution of food, clothing and medicaments, then it is the responsibility of the Europeans to act even more decisively," Kristin Helberg writes. Picture: UN staff members hand out food rations in Aleppo

​​Syrians are experienced businesspeople, and in traditional commercial centres such as Aleppo it makes more sense to enable a soap manufacturer to get his business up and running again and employ staff, than to be continually handing out food. Teachers and doctors must be encouraged to return to their jobs. And in the rural regions of the provinces of Idlib and Aleppo, farmers need seeds and customers for their products. Exports from rebel-controlled areas must not be allowed to falter because of a lack of trading regulations.

The more quickly a functioning public order is established, living conditions are improved and post-war job prospects created, the less likely it is that radical groups will gain a foothold in society. In addition, liberated regions could then serve as a positive example to the rest of the country of how a future Syria can look.

But thus far, the Syrian opposition has unfortunately not been in a position to take up the many impressive local initiatives and flesh them out into coherent structures. It is still waiting for a certain energetic support promised to it by Washington and other "Friends of Syria" in the event of an agreement. But the National Coalition for Syrian Revolutionary and Opposition Forces formed in November 2012 urgently needs financial, logistical, structural and content-related support if it is going to establish a provisional government within Syria.

This is the only way it will be able to gradually assume the administration of liberated territories, build up trust in oppositional institutions, become a credible point of contact for international donor countries and thereby provide an answer to the key question of what is in store for the nation after the toppling of Assad.

By offering to negotiate with Syria's Vice President Farouk Al Sharaa, National Coalition leader Mouaz Al Khatib has shown that the coalition is doing its political homework and gaining a greater appreciation of the rules of international diplomacy. 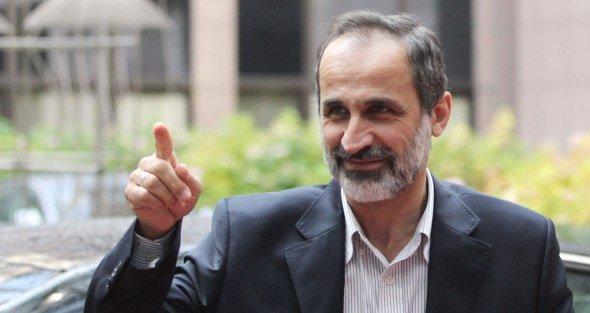 Doing their political homework: Despite the appalling violence, Mouaz al-Khatib, the president of the opposition coalition, has said he would negotiate with representatives of Syria's governing party - though not with Assad or members of his security services. This move puts the ball firmly in the regime's court, Helberg writes

​​Al Khatib does not want to discuss the future of Syria with Assad, but rather give the leadership of the regime the opportunity to peacefully hand over power to prevent any further bloodshed.

Instead of making Assad's resignation a pre-condition for negotiations, it is hoped a political solution will bring this about – a shrewd move that puts the ball firmly in the regime's court.

Rulers in Damascus will find it difficult to write off Al Khatib as a "marionette of the West" and refuse talks, particularly after even Syria's allies Russia and Iran met with the coalition leader in Munich. In doing so, the Syrian leadership is exposing its own dialogue rhetoric for what is really is: hollow talk and a play for time. In the end, Assad and his cronies emerge as the true obstacle to a political solution.

The ﻿National Coalition and international diplomacy

The EU can expedite this delegitimisation of the Syrian regime by not only formally recognising the National Coalition as the representative of the Syrian people, but also by practically treating it as such. Its members could be accredited as new Syrian ambassadors, as they already have been in France and several Gulf states, and embassy buildings handed over to the coalition, as happened recently in Qatar.

Of course, the National Coalition still lacks the necessary democratic legitimisation at home and its actions have triggered much criticism. But at the present time, it is the broadest opposition alliance making it the only body capable of spawning an initial alternative to the Assad regime. This fact must be realised by Moscow above all, to step up diplomatic pressure on Assad and his entourage. 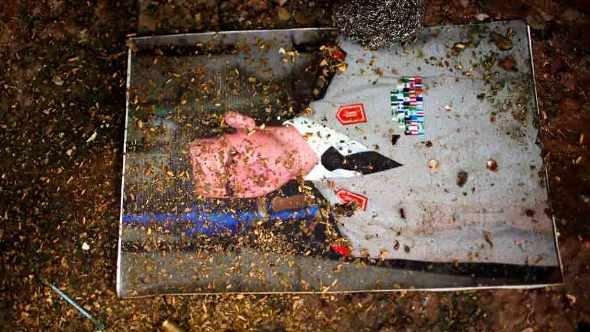 "The vexing issue of armed resistance": In view of the increasing militarization and imminent radicalisation of society, a swift and decisive victory by the Free Syrian Army would currently be the best scenario for Syria, Helberg writes

​​As soon as possible, Syria should be represented at the Arab League and United Nations by members of the opposition and not by diplomats from the regime. Only then does international aid for Syria recently approved by the UN make sense – a package totalling 519 million US dollars. The regime is supposed to use this money to help those it previously bombed out of their homes, look after the widows and orphans left behind by the men it has killed, and reconstruct the schools and hospitals it has intentionally reduced to rubble. Humanitarian aid could hardly be more cynical.

In these circumstances, the Europeans would be well advised not to put their Syria funds in the UN pot, thereby indirectly financing Assad's war against his own people. Instead, they should assign a portion of this money to the National Coalition, and use another portion to promote projects in liberated territories, preferably in areas of their own core competence: Establishment of infrastructure and administration, transitional justice, political education and the strengthening of civil society structures.

Which leaves the vexing issue of armed resistance. In view of the increasing militarization and imminent radicalisation of society, and in view of the fact that 100 to 250 people are dying every day, a swift and decisive victory by the Free Syrian Army (FSA) would currently be the best scenario for Syria. After all, the longer the conflict continues, the less likely it is that an orderly transition can be achieved and peace re-established across the nation, and the greater the risk that Syria will descend into a state of protracted war thereby destabilising the entire region. 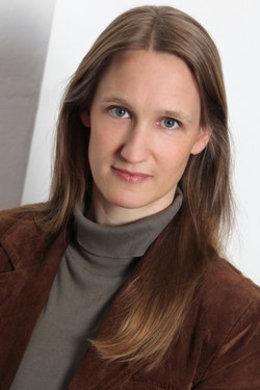 Kristin Helberg worked as a freelance journalist in Damascus from 2001 to 2009. She is considered to be among the best Syria experts in Germany

​​If it is going to defeat the regime, the armed opposition must be better organised and establish central command structures with the help of the National Coalition. Then, in the event that the regime is ousted, these structures could produce a new military leadership and defence ministry capable of restoring the state monopoly on the use of force and guaranteeing security for all Syrians.

Unfortunately, the West has still not understood that its reticence concerning the Free Syrian Army has in fact played into the hands of radical Islamist groups. While the FSA needs to sell flour to buy weapons, the well-funded Al Qaeda-affiliated Nusra Front buys this flour and uses it to make bread, which it then distributes to the people. It may well be that the residents of Syria's most conservative Sunni regions around Aleppo and Idlib regard the Jihadists with scepticism, but morally and financially, the radicals are already superior to the FSA.

For this reason, it can only be in the interests of the Europeans to support those forces within the FSA that are fighting for a free democratic Syria in which all confessional and ethnic groups coexist with equal rights.

When the Supreme Military Council – which was formed in December 2012 as an alliance of several brigades from various provinces ready to cooperate with the National Coalition – receives more money and better weapons, only then can it assert itself against Jihadist groups, bring more rebel units into its fold and protect liberated areas from regime air attacks.

The aim must be to gradually bring the armed resistance under political control, so that the demise of the Assad regime also means an end to the fighting.

Home
Print
Newsletter
More on this topic
The Syrian Conflict: Preparing for the Endgame''Syria in the Firing Line'': Beyond the ViolenceIran's Role in the Syrian Civil War: Masters and Servants
Related Topics
Arab Spring, Arabellion, Democracy and civil society, European Union (EU), Islam and democracy, Syrian Civil War
All Topics

Any reconciliation between Turkey and Syria’s Assad regime would have disastrous consequences for many Syrians, explains Syria expert Kristin Helberg END_OF_DOCUMENT_TOKEN_TO_BE_REPLACED

There are signs of an imminent normalisation of relations between Turkey and Syria. This would allow Erdogan to score political points domestically before the upcoming elections ... END_OF_DOCUMENT_TOKEN_TO_BE_REPLACED

As Syrian camps housing families of Islamic State fighters get more dangerous, there are calls to bring children out, even if the mothers don't want to go. The idea of separating ... END_OF_DOCUMENT_TOKEN_TO_BE_REPLACED

Where are the measures to deal with the looming challenges facing the Arab world? In this commentary, Marwan Muasher warns that the region is in grave danger of falling behind ... END_OF_DOCUMENT_TOKEN_TO_BE_REPLACED

At the end of every year, the team at Qantara.de gives you a run-down of the ten most-read articles on the site over the past 12 months. Here is a quick overview of the stories ... END_OF_DOCUMENT_TOKEN_TO_BE_REPLACED

Social engagement is often motivated by religious factors. A new book explores the background to these community efforts and appraises how effective they are in helping to ... END_OF_DOCUMENT_TOKEN_TO_BE_REPLACED
Author:
Kristin Helberg
Date:
Mail:
Send via mail

END_OF_DOCUMENT_TOKEN_TO_BE_REPLACED
Social media
and networks
Subscribe to our
newsletter