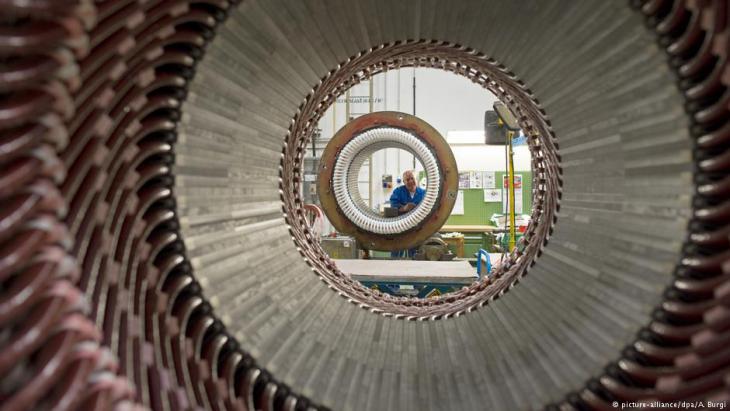 The United States has begun pressurising European companies to halt doing business with Iran. Many companies have already acted to avoid the threat of U.S. sanctions in the event of "prohibited business". Details from Stefan Buchen

Following its withdrawal from the international nuclear deal, the United States is now trying to bring Iran to its knees economically. In this endeavour, the "tough economic sanctions" announced by Trump and Pompeo along with the U.S. repudiation of the agreement will primarily affect European companies. American businesses stopped dealing with Iran years ago. For them, only a "regime change" in Tehran would herald a new era of possibilities.

Pompeo's exact words were that companies conducting "prohibited business in Iran" would be "called to account". It is the view of the U.S. administration that only Washington can determine what is prohibited and what is allowed, even if these decisions affect European companies.

This has sounded alarm bells in Berlin. Simply accepting the American policy of encroachment would not go down well. Moreover it would once again wreck the painstakingly restored climate of co-operation with Iran. But on the other hand, coming up with an effective way to counter U.S. sanctions policy presents the German government with a challenge.

At a meeting with European counterparts earlier this month in Brussels, German Finance Minister Peter Altmaier (CDU) appeared undecided. "We are trying to determine what concrete consequences the sanctions will have," he said evasively. Altmaier passed no comment on what European counter measures might look like. 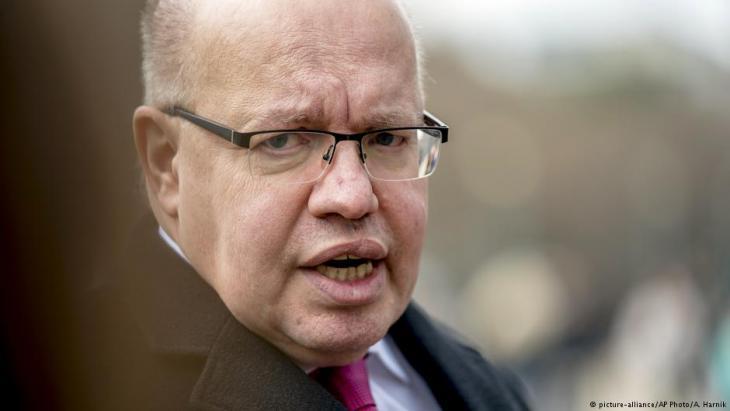 German government offers companies no guarantees: following the U.S. nixing of the nuclear deal with Iran, Economics Minister Peter Altmaier (CDU) warned against knee-jerk counter-measures aimed at protecting German industry. He declared: "We have no legal means of either protecting or exempting German companies from decisions made by the American administration"

He did at least formulate the dilemma facing Germany and the Europeans following the U.S. nixing of the nuclear deal: "Companies have invested in Iran, initiating business relations in the assumption that this nuclear agreement is valid. We therefore have a responsibility towards them, as well," said Altmaier.

While the German government and the EU are still considering their response, many companies are already voting with their feet. They are either dramatically scaling back their business with Iran, or halting it completely.

Siemens' boss Joe Kaeser was particularly hasty. Less than a week after Donald Trump's exit announcement, the CEO of the German technology company gave an exclusive interview to the U.S. broadcaster CNN, saying that Siemens would not be conducting any new business in Iran. "We are following the primacy of a political system," Kaeser explained.

Despite the clumsy English, viewers were left in no doubt that he was referring to Trump administration policy. As well as Siemens, the French energy concern Total, the Italian competitor Eni and the Danish logistics giant Maersk are further examples of global players that crowded into the Iranian market following the signing of the nuclear treaty in 2015 and that are now hurriedly beating a retreat.

But according to research conducted by the German television programme "Panorama", the exodus of companies from Iran is on a far greater scale than just these well-known examples; it is simply falling under the radar due to the sheer number of cases.

For example, a short time after Trump's Iran announcement, the DZ Bank – the Frankfurt-based umbrella institution for co-operative banks – circulated a statement to all its branches. The Panorama team has seen a copy of the letter. In it, the DZ informs its staff: "Within the context of current political developments and the U.S. exit from the JCPOA (nuclear deal) we now feel compelled to also halt all transactions related to Iran with effect from 30 June 2018."

Co-operative banks in receipt of the letter from their central institution forwarded it to their business clients active on the Iranian market. The "safeguarding of the reputation of our co-operative finance group Volksbanken Raiffeisenbanken" is one of the "main reasons for this decision", the statement continues. The DZ Bank specifies that Euro transactions within Germany with any connection to Iran will no longer be processed. Panorama enquired of the Frankfurt bank whether it wanted to leave it to U.S. President Donald Trump to determine "what is a good and what is a bad reputation". The bank declined to respond. 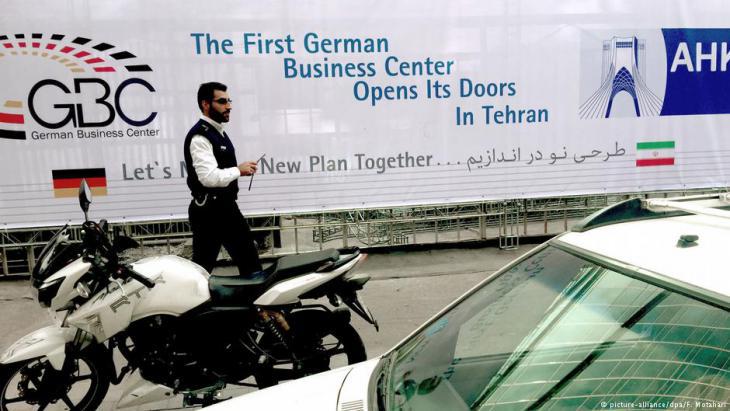 The Damoclesʹ sword of U.S. sanctions? Many European banks and businesses have already announced their withdrawal from dealings with the Islamic Republic. According to research conducted by the German television programme "Panorama", the exodus of companies from Iran is on a far greater scale than those cited; it is simply falling under the radar due to the sheer number of cases

For their business with Iran, companies rely on banks to process cross-border transactions with the nation. For this reason, the U.S. administration's financial system provides especially effective scope for sanctions. The actual basis for this is the dominance of the U.S. dollar as international currency. Ultimately, cash transfers in dollars are always conducted via a bank on U.S. soil.

This was also why the Americans targeted several European banks during the first phase of tough Iran sanctions from 2007 to 2014. The U.S. authorities imposed high penalties on the Commerzbank (1.5 billion dollars), the French BNP Paribas (8.9 billion dollars) and the Dutch ING DiBa (600 million dollars). The HypoVereinsbank is still waiting to hear how much it will be fined. Panorama also reported how the U.S. authorities forced the Commerzbank to part company with particular members of staff in Germany.

The industry association Deutsche Kreditwirtschaft (German Banking Industry Committee, or DK) now fears a repeat of this scenario. In a statement issued on 16 May, the DK reminds the government that following the 2015 nuclear agreement, it had expressly welcomed the fact that banks would again be doing business with Iran. Now, the industry association is calling on politics to "protect banks and the economy from potential U.S. sanctions." The DZ example shows that there does not appear to be much faith in this protection.

The broad impact of U.S. sanction policy in Germany becomes clear when one speaks to the leaders of German medium-sized businesses. "We've halted our business with Iran," explained the boss of a medium-sized company from Lower Saxony. This, despite the fact that the Iranian market was of definite interest to the supplier of railway and transport technology. "But we're also doing business with North America which makes us vulnerable," the director admitted in a telephone interview. "And it makes no economic sense to dispense with our U.S. business."

The logic is the same as that of Siemens boss Joe Kaeser. Only that for the entrepreneur from Lower Saxony, it is rather embarrassing. "We promised our Iranian partners a growing business. And now we're backpedalling," he says.

The manager of a company from southwest Germany who also wished to remain anonymous reported high investment in Iran in recent years. "Now we'll probably have to write the whole lot off," he says.

"German economy is harming itself"

"The Iranian market actually offers growth potential for German industry," says Pardis Parinejad, an entrepreneur and lawyer from Bochum involved in the manufacture of process technologies for material separation in the oil industry. At the same time, he represents several German medium-sized businesses in Iran. 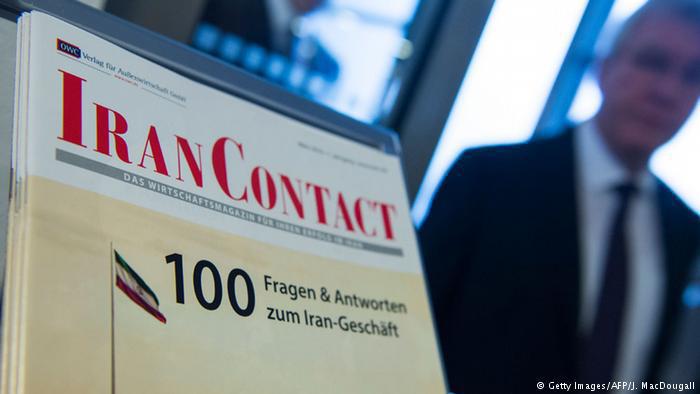 Slump in German-Iranian trading relations imminent: since the JCPOA was signed with Iran, trade with Germany has grown steadily. In 2016 German companies supplied Iran with goods to the value of 2.57 billion euros, representing a leap of 22 percent. 2017 saw a further 15.5 percent, with German exports to Iran reaching 2.97 billion euros. Trumpʹs de-certification of the deal is likely to prompt many banks and companies to beat a gradual retreat from doing business with Iran

"German exports to Iran could have climbed to over ten billion euros," says Parinejad. Now, the businessman estimates that they will fall from the current level of 3.7 billion euros back down to around two billion euros. The entrepreneur from Bochum knows that the importance of the U.S. market is the clincher. In 2017, German companies exported goods and services worth more than 110 billion Euros to the U.S. And nobody wants to lose this market.

But Parinejad warns: "If the Germans now pull out of business with Iran, then the German economy is harming itself. It's a gap that will automatically be closed by the Chinese, the Russians and other third nations."

Following the nuclear deal, the entrepreneur from Bochum took part in many high-level delegations to Iran: with former economics minister Sigmar Gabriel, with ex-chancellor Gerhard Schroder and the former Bavarian economics minister Ilse Aigner. At the time, not even three years ago, the mood was buoyed by a sense of a new beginning and hope for an economically-substantiated understanding with Iran.

For this reason, politically speaking it will now be sending the "wrong signal, if everyone just complies with the demands of the Americans," says Parinejad. After all, he continues, the Americans "unilaterally nixed the nuclear deal" and now want to dictate to the Europeans how they should conduct themselves with Iran. In Parinejad's view, the U.S. administration's declared intention to force Iran to its knees economically through sanctions is fatal. "It will merely bring the hardliners back into government in Tehran," he says. And that is not in the security interests of Europe.

The Iranian leadership has already indicated how it will react to the conflict: if the economic benefits of the nuclear deal, in which the rulers in Tehran made a commitment to halt uranium enrichment, are cancelled, Iran could for its part withdraw from the agreement. Should the "Islamic Republic" then go back to enriching uranium, escalation will reach a new level. Ultimately, we are likely to reach a point where the U.S. administration considers war justified.

Surging coronavirus cases in many parts of the world have overshadowed the start of this year's Muslim holy month of Ramadan, with festivities once again curtailed by contagion ... END_OF_DOCUMENT_TOKEN_TO_BE_REPLACED

German Middle East analyst Guido Steinberg and television journalist Ulrich Tilgner have both published new books on the conflicts in the Middle East. Their analyses and their ... END_OF_DOCUMENT_TOKEN_TO_BE_REPLACED

On 27 March, Iran and China signed a 25-year accord intended to foster "strategic co-operation". Despite ongoing uncertainty over the deal's actual scope, content and chances of ... END_OF_DOCUMENT_TOKEN_TO_BE_REPLACED

In Grenoble, France, two professors have been pilloried in a dispute over the use – or otherwise – of the term Islamophobia. Is freedom of speech in jeopardy? By Stefan Dege and ... END_OF_DOCUMENT_TOKEN_TO_BE_REPLACED
Author:
Stefan Buchen
Date:
Mail:
Send via mail

END_OF_DOCUMENT_TOKEN_TO_BE_REPLACED
Social media
and networks
Subscribe to our
newsletter