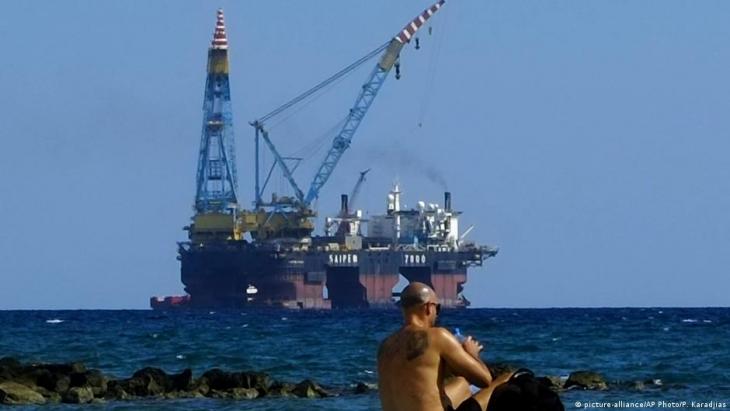 In a bid to become less dependent on Russia, Europe is seeking new sources of natural gas in the Eastern Mediterranean. War in the Ukraine has, however, led to new tensions over the EastMed pipeline project. By Ronald Meinardus

The West is looking to end its dependence on Russian oil and natural gas as quickly as possible. As a result, the search for alternative sources of supply is in full swing. Once again, the eastern Mediterranean has become the focus of attention, with large natural gas deposits suspected beneath the seabed. In addition, Europe's southern flank offers ideal conditions for converting solar energy into electricity and feeding it into transcontinental power grids.

Oil is primarily transported across the oceans by huge tankers, while natural gas is generally conveyed to consumers via a network of pipelines. The routing of such pipes has long since become a political issue of the first order. We need look no further than the Nord Stream 2 dispute: the pipeline, intended to transport Russian natural gas to Germany, is these days a symbol of Berlin's dependence on Putin.

The subject of pipelines is also highly politicised in the eastern Mediterranean. At the centre of a regional power struggle is EastMed, an ambitious plan to transport natural gas from Egypt, Israel, Cyprus via Greece to Italy. The wrangling over this major project quickly assumed international importance, with the USA playing a leading role.

The region is rich in conflicts and rivalries. Meanwhile, new alliances have emerged. Here too, the war in Ukraine has enormous geostrategic implications.  The reassessment of the Mediterranean energy reserves and, above all, the massive geostrategic upgrading of Turkey are among the oft-cited tectonic shifts that have occurred in recent weeks.

At the beginning of the year, before Vladimir Putin embarked on his war of aggression, Washington announced that it no longer supported the ambitious plan to build a pipeline from Egypt and Israel via Cyprus and Greece to Europe. The policy change was announced in the form of a "non-paper", which caused a great stir, especially in Greece and the Republic of Cyprus. After all, it pulled the rug out from underneath both Athens' and Nicosia's energy policy strategies overnight. 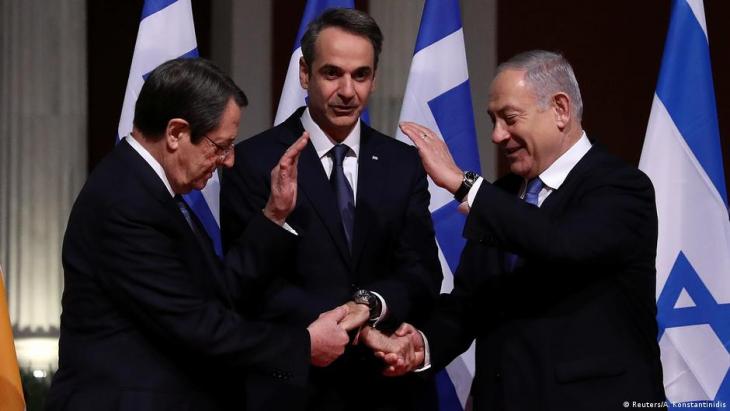 The heads of state of Cyprus, Greece and Israel signing an agreement in principle for the planned construction of the EastMed pipeline in 2020 in Athens. EastMed was long considered the flagship project of the "3 + 1 Alliance", an alliance of the three countries – with considerable input from the USA. All these countries were united by their more or less pronounced antagonism towards Turkey. With the outbreak of the Ukraine war, the geostrategic situation changed and Joe Biden withdrew his support from the project

The Americans' reasoning was both financial and ecological; they argued that the high costs of a project to transport fossil fuels – six billion euros in construction costs – were not in keeping with the times in view of climate change.

But that was before the war began. With the flare-up of hostilities, which has prompted new energy policy planning games in many places, those pushing the EastMed proposal sensed a renewed opportunity – most likely in vain, as will become clear.

While Washington's no to EastMed in January was somewhat unofficial, coming in the form of a confidential "non-paper", the Biden administration has since communicated its rejection of EastMed to the interested parties – and the public – in no uncertain terms. In early April, U.S. Under Secretary of State for Political Affairs Victoria Nuland visited Athens, Ankara and Nicosia. In addition to coordinating the anti-Russia strategy, the focus was on energy issues and, first and foremost, the EastMed pipeline and why this is no longer on Washington's agenda: "We don’t need to wait for 10 years and spend billions of dollars on this stuff. We need to move the gas now. And we need to use gas today as a transition for a greener future. Ten years from now we don’t want a pipeline. Ten years from now we want to be green,“ said the politician in an interview with the Athens daily Kathimerini.

Apart from the ecological concerns and the lengthy construction period, Washington's U-turn regarding pipeline policy in the Eastern Mediterranean is due to another – in the grand scheme of things, probably pivotal – reason. It is connected to the dramatic rise in Turkey's status following the outbreak of war in Ukraine.

In recent weeks, there has been a clear improvement in relations between Washington and Ankara. This is thanks in part to Turkey's unique geostrategic position, situated as it is in the war's front yard, and in part to some skilful political manoeuvring on the part of Recep Tayyip Erdogan, who prides himself on being an indispensable mediator between the fronts and, as a result, has gained considerable status on the international stage.

"It goes without saying that Turkey’s relationship with the West is undergoing a strategic transformation,“ Burhanettin Duran, a leading Erdogan commentator, remarked confidently, referring to the long list of top Western politicians who are to be found visiting Ankara these days. Besides Ukraine, the energy issue is a permanent feature of the agenda. 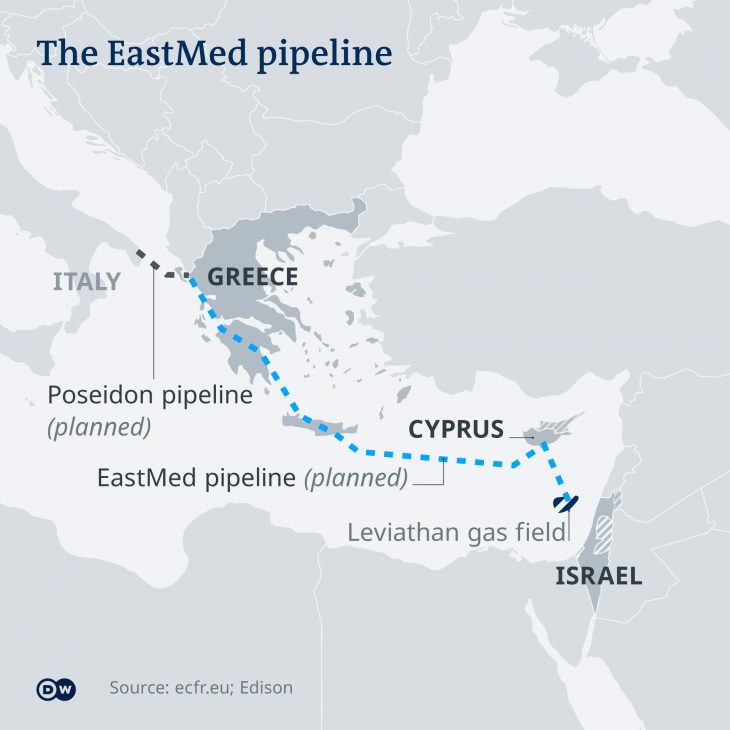 Planned route of the EastMed pipeline: with this major project, southeastern Europe is looking for alternatives to Russian gas. Experts' opinions differ on whether it is economically viable and ecologically justifiable. The EU wants to reduce its CO2 emissions by 55 percent by 2030, which is one reason why new investments in pipelines are frowned upon. But natural gas will remain an important part of Europe's energy mix in the coming years, perhaps even decades

Erdogan never made any secret of the fact that he regarded the planned route of the East Mediterranean pipeline as sheer provocation. Ankara insists that the gas should not flow past Turkey, but via Anatolia to Europe.

Washington's reversal is a concession to Turkey and evidence that relations between the two countries have entered a new phase. Both governments sealed this new chapter at the beginning of April with a so-called "strategic mechanism", which is supposed to progress gradually to a strengthening in relations.

For the Americans, the pivot towards the Turks and the pipeline issue is something of a balancing act, since until recently the pipeline project enjoyed Washington's political backing. EastMed was long considered the flagship project of the "3 + 1 Alliance", an alliance between Greece, Cyprus and Israel – with considerable input from the USA. Egypt played – and still plays – an important role in this context. All these countries are united – or, more correctly, were united – by their more or less pronounced antagonism towards Turkey.

It is no secret that Erdogan's aggressive foreign policy in the region in recent years had managed to turn almost all neighbouring countries against him. Little wonder that Turkey was not invited when the political leaders of Greece, Cyprus and Israel signed the EastMed Treaty at a solemn ceremony in Athens in January 2020.

The government in Athens is not (yet) willing to take the "no" from Washington at face value. "The EastMed is alive and kicking," the Greek foreign minister pronounced at the Delphi Economic Forum a few days ago. Meanwhile, the Cypriot President Nikos Anastasiadis pointed out that the pipeline is a European project and that the USA should – read between the lines – keep out of it. It is however naive to assume that the Americans will abstain, especially in these turbulent times and on such a strategically important issue. Moreover, when it comes to energy policy, Europe too is light years away from the much-invoked "strategic autonomy".

Meanwhile, Ankara is pursuing its old plan of a pipeline between Israel and Turkey that would connect the gas fields of the eastern Mediterranean with the Turkish networks. In this, Erdogan capitalising on the relaxation in relations with Israel, which became obvious for all to see with the state visit to Turkey in February of Israeli President Isaac Herzog. A little later, Erdogan named cooperation in the field of natural gas as "one of the most important steps we can take together for bilateral ties."

Yet the situation is much more complicated than it might seem. The dispute over the pipeline route is overlaid by a conflict regarding sovereign rights and control zones. This is where Athens and Ankara, but also Nicosia and Ankara, are at loggerheads. Where the maritime borders run is highly disputed. In 2020 the conflict brought Greece and Turkey to the brink of war. At that time, the European Union (EU) forced Ankara to impose a moratorium under threat of sanctions.

Before a pipeline can transport the valuable gas from the south to Europe, Greece and Turkey in particular must bury the hatchet. It is true that there has been a cautious rapprochement since the onset of war in Ukraine. Whether Ankara and Athens – not to mention the Cypriots – have the political stamina for a historic compromise on sovereign maritime rights seems doubtful.

Since President Abdul Fattah al-Sisi seized power in Egypt in 2013, he has ruled the country with an iron fist. Civil society, opposition and free press struggle to survive. Tens ... END_OF_DOCUMENT_TOKEN_TO_BE_REPLACED

The lack of grain supplies from Ukraine is forcing Egypt to act. Now even the Toshka project is being revived to grow grain in the desert. Birgit Svensson travelled to see it END_OF_DOCUMENT_TOKEN_TO_BE_REPLACED

In this unusually beautiful book of images and text, published in German and Arabic, artist Marianne Manda presents her own unique take on the megacity of Cairo. In over fifty ... END_OF_DOCUMENT_TOKEN_TO_BE_REPLACED

A stage, lights, a mesmerised audience: it looks like an Egyptian folkloric concert, but Umm Sameh is singing to heal the sick by driving out the demons that possess them END_OF_DOCUMENT_TOKEN_TO_BE_REPLACED
Author:
Ronald Meinardus
Date:
Mail:
Send via mail

END_OF_DOCUMENT_TOKEN_TO_BE_REPLACED
Social media
and networks
Subscribe to our
newsletter