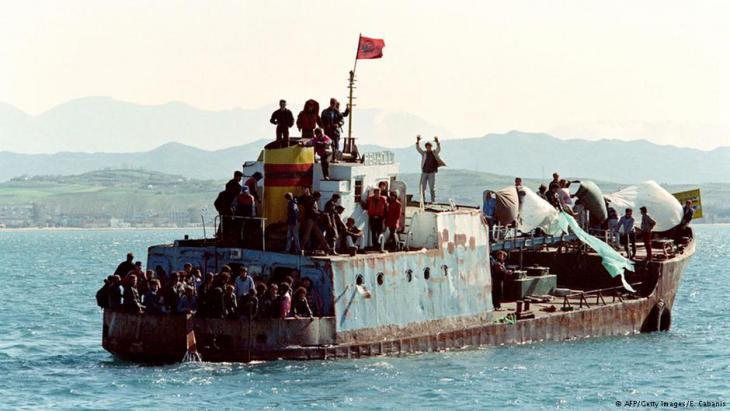 Europe's refugee policy
Anything is better than the status quo

Using military force to combat people-smugglers also increases the risks for refugees. How can Europe reform its refugee policy without lying to itself? By Julian Lehmann

There is no shortage of knowledge. The public hears daily reports about asylum seekers crossing the Mediterranean, about successful and failed attempts to cross the EU's land borders, about people drowning in wretched conditions. Despite this, we still have not managed to deal with the crisis in a sensible way.

The fronts have hardened between those who deny that the EU has any responsibility in this matter and those who brand it a mass murderer. Neither of these two sides is offering practical answers, and yet a consensus would be within reach if we tried to make improvements without lying to ourselves.

First, let's begin by taking a look at the figures. Over the last 15 years, an average 45,000 people have undertaken "irregular" crossings of the Mediterranean. In 2014, this number was more than 200,000 – a figure that also looks likely to be reached in 2015. The increase has been triggered by two factors in particular: the war in Syria, and the instability in Libya and Egypt. These states are no longer willing to take steps to prevent refugees from setting out for Europe from their territory.

With the increase in refugee numbers, the Mediterranean has become a mass grave. Of the 18,000 people who have lost their lives attempting to cross the Mediterranean since 1998, over 8,000 have died in the last four years. Research into the people-smuggling community has revealed that the growing despair – and therefore the growing "demand" that has come with it – has led to a breed of smugglers who are not concerned about their reputation and who offer even more unsafe passages than others do. This means that crossing the Mediterranean as a refugee has never been as dangerous as it is today.

One year stands out from this trend: 2014. This was the year with the highest recorded number of deaths, despite the large-scale sea rescue operation "Mare Nostrum" being implemented by the Italian navy and coastguard . At the same time, however, it was the only year in which the increasing number of crossings was not accompanied by an increasing probability of dying during a crossing. The Italians' unprecedented operation ultimately managed to rescue around 130,000 people. 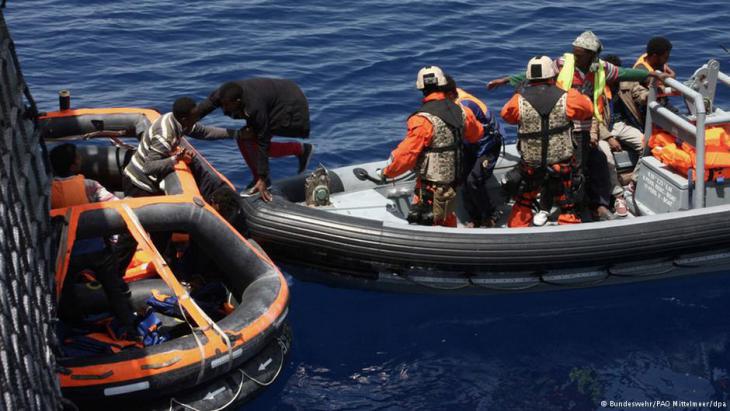 Questionable policy: Julian Lehmann fears that the planned military operation against people-smugglers will simply raise the prices for refugees wanting to make the uncertain crossing to Europe, lengthen the dangerous waiting time before the crossings, and ultimately just force them to rely on rubber dinghies

The pros and cons of "Mare Nostrum"

In the Interior Minister's view, "Mare Nostrum" benefited the business of those people-smugglers who care least for the refugees' safety. In the view of the NGOs, it is the suspension of "Mare Nostrum" that is now causing a rise in deaths.

The figures suggest that both of these claims are true. And for this reason, just combating the people-smugglers alone cannot be an option for the EU. The military operation against traffickers that the EU recently agreed on will just increase the risks for refugees. It will drive up prices, make people fall back on using rubber dinghies, and lengthen the dangerous waiting time before the crossing. Incidentally, the EU is acting foolishly when it uses up its diplomatic resources in the UN Security Council for an initiative that is both legally and politically dubious.

Providing sufficient capacities for sea rescue, by contrast, should clearly be a task for all of Europe. Failure to lend assistance is a crime, and the action the EU takes on its outer borders is therefore also an indicator of Europe's credibility.

At the same time, the experience of "Mare Nostrum" shows that a large-scale sea rescue operation is still no guarantee that all deaths will be prevented. There is no easy way out of the dilemma, as long as war continues to rage in Syria and the dictatorship in Eritrea continues. After all, 40 per cent of asylum seekers who cross the Mediterranean are Syrians and Eritreans.

NGOs have been demanding legal routes into Europe for a long time. But there is a down-side to this demand too: it remains unclear who would select people for these routes, and by what process they would be chosen. There have been informal suggestions that asylum seekers could be brought to the EU on ferries. But would Syrians be the only ones allowed on board, or could Eritreans and Somalians, most of whom also fear persecution, be included?

Establishing "asylum and welcome centres" in North Africa, as the German Interior Ministry has suggested, would be beset by both practical and legal problems. Quite apart from the difficulties involved in setting up these centres in the crisis-hit countries of North Africa, they could quickly become refugee camps in which people would be stranded in terrible conditions. 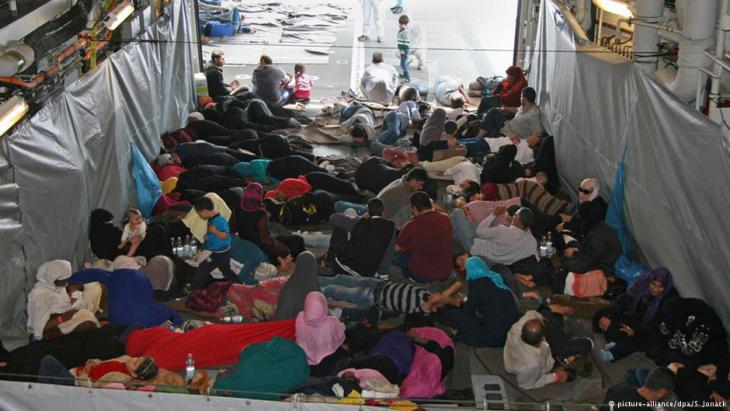 No effective toolkit for stopping the people-smugglers in their tracks: "The likelihood is that no measure short of opening the borders would put the traffickers out of business and end the deaths on Europe's borders. The refugee policy will save thousands of lives, though it will still just be a way of muddling through," writes Julian Lehmann

No solution in sight

Australia is demonstrating the absurd consequences of an "exportation" of the issue. The co-operation with neighbouring countries and the running of off-putting reception centres on island states in the Pacific is being sold there as the "Pacific solution".

According to research conducted by the British daily newspaper The Guardian, Australia spends €450,000 a year on every person who tries to reach the country – a total of around €1.2 billion. With the number of "irregular" entries to the EU, a similar policy here would cost the EU ten times as much – €10.2 billion, which is around a hundred times more than a good sea rescue operation.

For the moment, alongside a sea rescue operation like this, Europe's best reaction remains to give transit nations even more support on the issue of "resettlement", by taking in people in these countries that have been recognised as refugees by the UN High Commissioner for Refugees. This plan would necessitate more than the 20,000 places already agreed upon.

Resettlement is also a reaction to the fact that only those whose health and wealth allows it will set off for Europe in a tiny boat. In terms of short-term solutions, it is the best of a bad lot. In the short term, the member states of the EU should also take responsibility for processing a large proportion of the asylum seekers arriving on the Italian coast, in order to support Italy. This could become a model for reforming the distribution system in the EU, so that pressure is taken off the states on its borders.

In the medium term, the EU can expand its asylum support office, and put it to work helping the authorities in the southern member states. Another medium-term measure would be stronger co-operation with the states on the Mediterranean, with the aim of creating asylum systems there that are worthy of the name. In this respect, the EU Commission's plan is going in the right direction.

None of these suggestions is perfect. The likelihood is that no measure short of opening the borders would put the traffickers out of business and end the deaths on Europe's borders. The refugee policy will save thousands of lives, though it will still just be a way of muddling through. But even that is better than the status quo.

Home
Print
Newsletter
More on this topic
Migration and xenophobia: Europe's refugee problem, then and nowAfter the refugee catastrophe in the Mediterranean: How the EU is killing refugeesCreative activism in Berlin on the refugee crisis: "The dead are coming"Refugee crisis in the Mediterranean: New networks trafficking Syrians from Egypt to Europe
Related Topics
Democracy and civil society, European Union (EU), Human rights, Policy on refugees and migration, Refugees
All Topics

Two refugees detained in Egypt are facing deportation to Eritrea. The expulsion of the Eritreans, who have been incarcerated in Cairo for more than eight years, has been halted ... END_OF_DOCUMENT_TOKEN_TO_BE_REPLACED

Blending East African, Bollywood and Arab music traditions, Groupe RTD's "The Dancing Devils of Djibouti" is not only a stunning album, it is also the first internationally- ... END_OF_DOCUMENT_TOKEN_TO_BE_REPLACED

A team of investigative journalists involving the Deutsche Welle have discovered that German weaponry and tech play a far greater role in the Yemen conflict than previously ... END_OF_DOCUMENT_TOKEN_TO_BE_REPLACED

Ethiopia and Eritrea didn't pen their peace agreement in Addis Ababa or Asmara, but in Saudi Arabia with the Emirates alongside. Are economic and military interests increasingly ... END_OF_DOCUMENT_TOKEN_TO_BE_REPLACED

How do authoritarian regimes respond to EU initiatives to stem migration? A recent publication by the German Institute for International and Security Affairs (SWP – Stiftung ... END_OF_DOCUMENT_TOKEN_TO_BE_REPLACED

The EU claims that the migration pact with Africa is a completely new initiative. Rather than reshaping patterns of migration, however, Europe′s desperate politics of symbolism ... END_OF_DOCUMENT_TOKEN_TO_BE_REPLACED
Author:
Julian Lehmann
Date:
Mail:
Send via mail

END_OF_DOCUMENT_TOKEN_TO_BE_REPLACED
Social media
and networks
Subscribe to our
newsletter