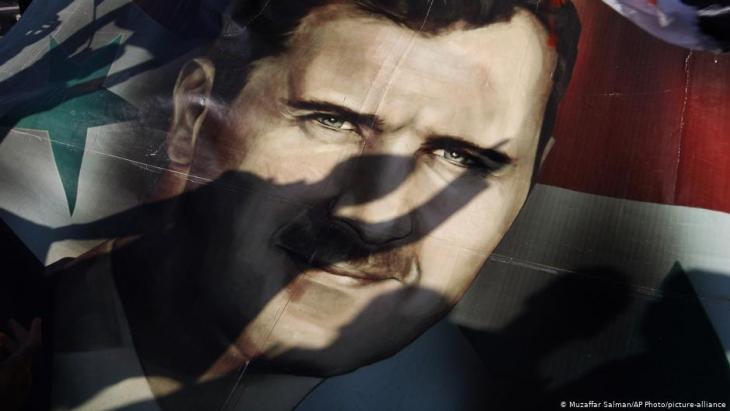 Investigations by German federal prosecutors into the evidence of chemical warfare in Syria are ongoing. Deutsche Welle and Der Spiegel gained exclusive access to witnesses and documents that form part of the landmark inquiry. By Lewis Sanders IV, Birgitta Schulke-Gill & Julia Bayer

The rockets sounded different that night. This time they lacked the explosive impact that had so frequently accompanied attacks on opposition-held areas in Syria.

On 21 August 2013, rockets loaded with sarin warheads were launched into eastern Ghouta. Cooler weather allowed the nerve gas to permeate into lower levels of buildings as it spread across parts of the rebel stronghold.

"It was like Judgement Day, as if people were ants killed with fly spray," says Eman F., a trained nurse and mother of three children. "Many people were dead on the road, cars stopped, people packed into them [as if they died trying to flee]." Eman told her brother to take the children to safety before she rushed to the local hospital where she worked. Her husband, Mohammed F., followed shortly after to assist with first aid.

Throughout the conflict, civilians have often sought shelter from airstrikes, shelling and other indiscriminate attacks in the lower levels of buildings, and this particular night would be no different. "Many people came to the hospital because the hospital is in a basement," says Mohammed. "I went to my wife and told her to come outside and see what was happening. When I went back up ... a rocket landed in front of the hospital. I couldn't feel anything."

Eman weeps as she recalls re-surfacing from the basement to see what was unfolding, only to find her husband convulsing on the ground like dozens of others around him. "It was a terrible scene that I cannot describe to you," says Eman, as the cigarette she holds starts to burn through the filter.

"I did not know what had happened. I left to get atropine injections to help my husband in case of suffocation. When I returned to give him the needle, my colleague and I didn't feel anything, nor do I remember anything after."

Sarin, a chemical warfare agent, had gripped its victims. Its odourless presence only made itself known after it had already begun to paralyse the body's respiratory system. In most cases, those who did not survive died of asphyxia. Survivors blamed the Syrian regime for the attack.

To this day, Eman struggles with what she saw that August night in eastern Ghouta. The panic attacks are a constant reminder of what she lost – including her eldest son. Eman and her husband Mohammed discovered the fate of their 19-year-old son when a relative identified the boy days later in images posted online. They were never given the chance to recover his body, which was buried in a mass grave shortly after the attack.

But they aren't the only ones who lost a loved one that night. At least 1,000 people were killed in the attack, including more than 400 children, according to several independent sources. Targeting civilians with the use of chemical weapons constitutes a war crime under international law.

"To this day, I imagine the children who were dying in front of my eyes," says Thaer H., a Syrian journalist who documented the attack. "I was not a medic. I did not know how to save someone dying in front of me – we were not trained in how to deal with [toxic] gases."

Research project "The Global Qur'an", brainchild of Professor of Islamic Studies Johanna Pink and sponsored by the European Research Council, analyses the history and ... END_OF_DOCUMENT_TOKEN_TO_BE_REPLACED

As the Western world emerges from a holiday season made less festive by COVID-19, millions of children in Afghanistan are starting 2022 facing the prospect of famine, illness, and ... END_OF_DOCUMENT_TOKEN_TO_BE_REPLACED

A wedding extravaganza of bright colours, flowers, feasting and dancing, yet the bride, Nefie Eminkova, who comes from Bulgaria's Pomak – Muslim – minority, can see none of it. ... END_OF_DOCUMENT_TOKEN_TO_BE_REPLACED

Every year in December, the team at Qantara.de takes a look back at the articles that proved most popular with our readers. This year is no different. Here is a run-down of the ... END_OF_DOCUMENT_TOKEN_TO_BE_REPLACED

Jesus – Issa in Arabic – doesn’t merely enjoy the highest place among the prophets in the Koran. He is also revered in Islam’s mystical tradition for his message of love and mercy ... END_OF_DOCUMENT_TOKEN_TO_BE_REPLACED

The military in Sudan has never waged war against a neighbour, but it has already staged 17 coups. Tens of thousands of people are risking their lives to oust the military by ... END_OF_DOCUMENT_TOKEN_TO_BE_REPLACED
Author:
Lewis Sanders IV & Birgitta Schulke-Gill & Julia Bayer
Date:
Mail:
Send via mail

END_OF_DOCUMENT_TOKEN_TO_BE_REPLACED
Social media
and networks
Subscribe to our
newsletter