The criminal complaint provides extensive documentation alongside open-source information that could be used as legal evidence of war crimes committed in Ghouta and Khan Sheikhoun. It included testimonies from at least 50 defectors of the Syrian regime with first-hand knowledge of the country's chemical weapons programme.

A vast portion of witness testimony has been corroborated by videos and images taken by people on the ground, including victims. The content was collected and archived by the Berlin-based Syrian Archive, which undertook the task of verifying the material. As a result, digital evidence "becomes really important and central to the legal complaint by helping corroborate witness testimonies," says Hadi al-Khatib, director of the Syrian Archive.

Such evidence has been crucial to forming a broader picture of the events, and has supported the findings of the official UN probe into the Ghouta attack. The UN fact-finding mission did not name suspected perpetrators because attribution was not part of its mandate. But it made one thing abundantly clear. "The environmental, chemical and medical samples we have collected provide clear and convincing evidence that surface-to-surface rockets containing the nerve agent sarin were used," said the UN fact-finding mission in a report less than a month after the attack. "This is a war crime," said then-UN Secretary-General Ban Ki-moon.

Implicated via the chain of command

Key to the criminal complaint filed in Germany is the diverse array of witness testimony. It includes high-ranking military personnel and scientists at Syria's Scientific Studies and Research Centre (SSRC), which was responsible for developing and maintaining the country's chemical weapons programme. 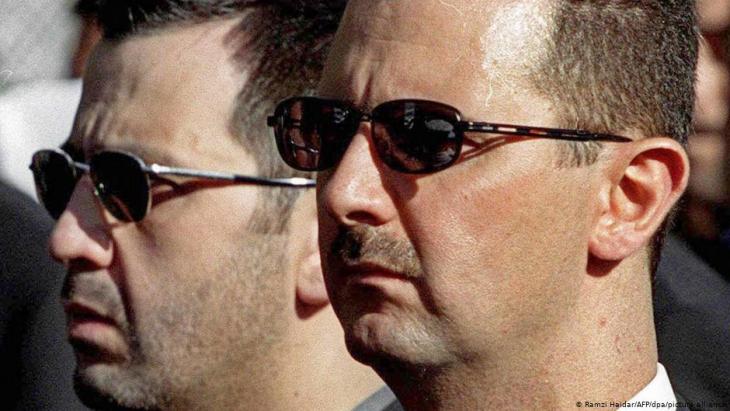 No smoking gun required: although Maher al-Assad likely issued the direct order, President Bashar al-Assad is implicated through the chain of command. "People who have given orders to normal soldiers, or whoever is in charge of launching the attacks can be indicted because of this act of ordering – or even if the person didn't order it themselves, but they were aware or should have been aware of these attacks," says Heinsch. "Because of their function as a military commander, they can be held responsible – and that's very important"

Evidence suggests that President Assad's younger brother, Maher Assad, widely considered the second most powerful person in Syria, was the military commander who directly ordered the use of sarin gas in the Ghouta attack of August 2013. However, witness statements filed with the criminal complaint also indicate that the deployment of strategic weapons, such as sarin nerve gas, could only be executed with President Assad's approval. According to documentation seen by DW, President Assad is believed to have authorised his brother to conduct the attack.

"We have evidence that [President Assad] is involved in the decision-making. I wouldn't say that we ourselves have proven that, but we certainly have some information that indicates his involvement in sarin attacks," emphasises Steve Kostas, a senior legal officer with the Open Society Justice Initiative's litigation team. The documentation shows how Assad's brother Maher would have then given the official order at an operational level. From there, an elite group within the SSRC dubbed Branch 450 would have loaded warheads with chemical agents and the 155th Missile Brigade would have launched the surface-to-surface rockets under direct oversight from Maher.

"We've shown that there was a specific unit called the Branch 450 within the SSRC, which was significantly involved in the planning and execution of sarin attacks," says Kostas. "We've shown the chain of command involved in that unit and its connection to the presidential palace. To date, the testimonies describing the chain of command are considered the strongest available evidence directly linking Assad to the use of chemical weapons in Syria.

But is that enough for German prosecutors to issue an indictment? For international law experts, a smoking gun isn't required for an indictment of this calibre. Throughout history, there have been moments where countries have collectively taken steps to enact justice against perpetrators of mass atrocities, such as the Nuremberg and Tokyo trials in the wake of World War II. The underlying concept of such nation-driven tribunals is that individuals who form part of a command structure can be held to account for atrocities, even if they did not personally commit them.

Research project "The Global Qur'an", brainchild of Professor of Islamic Studies Johanna Pink and sponsored by the European Research Council, analyses the history and ... END_OF_DOCUMENT_TOKEN_TO_BE_REPLACED

As the Western world emerges from a holiday season made less festive by COVID-19, millions of children in Afghanistan are starting 2022 facing the prospect of famine, illness, and ... END_OF_DOCUMENT_TOKEN_TO_BE_REPLACED

A wedding extravaganza of bright colours, flowers, feasting and dancing, yet the bride, Nefie Eminkova, who comes from Bulgaria's Pomak – Muslim – minority, can see none of it. ... END_OF_DOCUMENT_TOKEN_TO_BE_REPLACED

Every year in December, the team at Qantara.de takes a look back at the articles that proved most popular with our readers. This year is no different. Here is a run-down of the ... END_OF_DOCUMENT_TOKEN_TO_BE_REPLACED

Jesus – Issa in Arabic – doesn’t merely enjoy the highest place among the prophets in the Koran. He is also revered in Islam’s mystical tradition for his message of love and mercy ... END_OF_DOCUMENT_TOKEN_TO_BE_REPLACED

The military in Sudan has never waged war against a neighbour, but it has already staged 17 coups. Tens of thousands of people are risking their lives to oust the military by ... END_OF_DOCUMENT_TOKEN_TO_BE_REPLACED
Author:
Lewis Sanders IV & Birgitta Schulke-Gill & Julia Bayer
Date:
Mail:
Send via mail

END_OF_DOCUMENT_TOKEN_TO_BE_REPLACED
Social media
and networks
Subscribe to our
newsletter