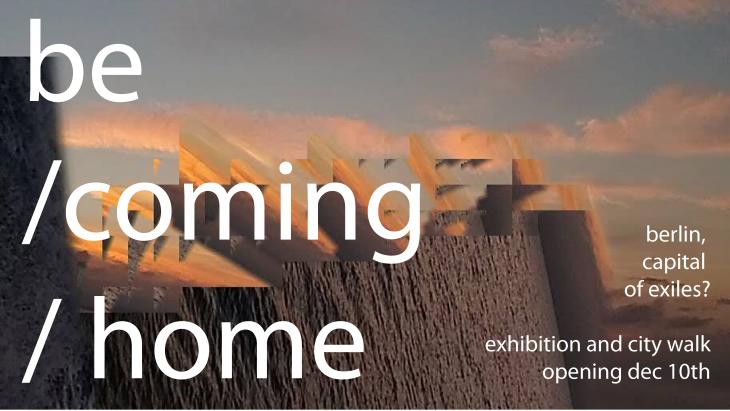 "Be/coming/home" by the Berlin dis:orient collective – which runs until 22 December – showcases work by six artists in exile in the capital. The multimedia presentation, in the form of a COVID-secure urban walk through Kreuzburg and Neukolln, shows how they experience and influence Berlin as a city of exile. Hannah El-Hitami went to see the exhibition for Qantara.de.

The photographs in the window show hands kneading bread dough, and Arab flatbreads rising in the oven. Beneath the display window, a homeless man lies wrapped in a sleeping bag, which provides scant protection against the Berlin December cold. Young men in hooded jackets are coming out of the Sudblock Aquarium, a cultural centre with walls covered in graffiti, while in the background, U-Bahn trains and cars speed past on Kottbusser Tor.

The backdrop to the "Be/coming/home – Berlin, capital of exiles?" exhibition is quite unlike a typical art show. It has been designed as a city walk, and takes viewers through the Berlin districts of Neukolln and Kreuzberg, past mosques, social housing, cultural spaces and takeaways. The exhibition doesn’t just show the work of exiled artists living in Berlin; it focuses on these neighbourhoods and their migrant life.

It is ten years since the protest movements began in the Middle East and North Africa. Since then, millions of people have been forced to flee their homelands and have found new homes elsewhere. Numerous activists and artists from Syria, Egypt and other countries in the region have come to Berlin, and today they help to shape life in the capital – from a gastronomic and linguistic perspective, but also with their creativity. Just like Turkish and Vietnamese workers, political dissidents from Iran or Eritrea, refugees fleeing war in the Balkans or Afghanistan, and students from all over the world did before them.

The dis:orient collective’s "Be/coming/home – Berlin, capital of exiles?" exhibition creates a monument to them all. All the stops are outdoors and freely accessible despite coronavirus restrictions, and the exhibition, which runs from 11 to 22 December, asks how Berlin becomes a new home for people, and how the city and its new inhabitants change one another in the process.

Over the past ten years, the proportion of Berliners with a migrant background has risen by one percentage point per year, and has now reached 35 percent. Most have roots in Turkey or the Arab nations. In areas such as Neukolln, every second person has a foreign passport, or at least one parent from outside Germany.

It is fitting, then, that the dis:orient exhibition takes visitors to twelve sites in Neukolln and Kreuzburg that represent migrant life in all its difficulty, beauty and normality – with Kottbusser Tor and Hermannplatz, and the adjoining Sonnenallee, forming its twin centres of gravity.

Alongside the artworks, which you can view either as stops on the walk or on your smartphone, you will see mosques, synagogues, cinemas, roads, cultural spaces, cafes and public squares, as you walk from Gorlitzer Bahnhof to the huge Tempelhofer Feld park at the former airport. The stories of the individual stops are told by Egyptian doctoral student and dis:orient representative Iskandar Abdallah on the exhibition’s online audio-guide.

"We chose sites that are known for being places of refuge or personal fulfilment for people who are newly arrived in Berlin," his dis:orient colleague Georg Layr explains. He had a substantial role in the planning of "Be/coming/home". The coronavirus pandemic made the city-tour concept a necessity, but it had been on the table prior to that: "It’s about exile in Berlin, so we wanted to hold the exhibition out in the city, not root it in a neutral indoor space," says Layr.

"I’ve learned that no place belongs to me"

The photo reportage in the afore-mentioned Sudblock Aquarium cultural centre shows images from the Habibi bakery. The Syrian photo-journalist Mohammad Al Bdewi documented the work of the bakery, exploring the significance of the flatbread as an everyday reminder of home.

"Like other foods, the flatbread can trigger memories, spark longings, and at the same time soothe and sate the longing for home," Al Bdewi writes in his text for the exhibition. "Arab flatbreads became a part of Berlin after new arrivals from the Arab world began to make a home for themselves here."

Just a few minutes’ walk from Sudblock Aquarium is Cafe Bulbul, which has become a popular meeting place for the Arabic-speaking diaspora over the past year. The cafe window now plays host to a video installation, part of the dis:orient tour, by the Palestinian artist Carmel Al-Abbasi.

Her art is always about displacement, the artist says. She was born in Syria, the daughter of Palestinian refugees, and has also lived in Gaza, Norway and Spain. "I’ve learnt that no place belongs to me, and then again, for that reason any place can belong to me."

Individual freedom in a mother tongue

The "Be/coming/home" exhibition is part of a larger project by dis:orient that aims to network initiatives and political potential in the "capital of exile", as the Egyptian sociologist Amro Ali called Berlin in a 2019 essay. According to dis:orient member Georg Layr, Amro Ali initiated the debate around Berlin as a capital city of exile that inspired the exhibition.

In his essay, Ali calls on the Arab diaspora to start organising in a safe city, far from home, and adopt a common political or philosophical direction. Berlin is an ideal place for this, he says, since in comparison to other European capitals it offers affordable living space and has no obvious colonial past in the Middle East or North Africa.

"Berlin is where the newly-arrived Arab suddenly (but not always) recognises that the frightful habit of glancing over the shoulder – painfully inherited from back home – gradually recedes. All the while, a new dawn slowly sets in among the meeting of peers in this new city," Amro Ali writes.

In this way, Berlin becomes a new home for the diaspora (and not just the Arabic-speaking diaspora), a place that offers individual freedom, and allows you to express yourself in your mother tongue, too – all in an environment that has imported familiar voices, sounds and smells from home.

The "Be/coming/home" exhibition is an attempt to bring together the creative potential that arises from this, and the places in which this potential can grow. In the post-COVID era at the latest, these creative possibilities may well become increasingly visible in the capital’s cultural spaces.

The European Court of Justice has given its backing to companies that don't allow female Muslim staff members to wear headscarves – as long as they don't permit the wearing of ... END_OF_DOCUMENT_TOKEN_TO_BE_REPLACED

Reading Hassan Blasim's God 99 is an immersive experience of grief and exaltation, anger and disgust, writes Marcia Lynx Qualey. We join the Iraqi narrator as he sits around in ... END_OF_DOCUMENT_TOKEN_TO_BE_REPLACED

The disappearance of Razan Zeitouneh and her colleagues has been one of the greatest mysteries of the Syrian war – until today. DW's investigative unit hunted clues across six ... END_OF_DOCUMENT_TOKEN_TO_BE_REPLACED

Muslims in Europe regularly experience threats, witness attacks and are the target of hate across national borders. Now the Council of Europe, the continent's leading human rights ... END_OF_DOCUMENT_TOKEN_TO_BE_REPLACED

The West is pulling out of Afghanistan after 20 years, but the conflict remains – and the Taliban are stronger than they have been for a long time. And now? The renowned Taliban ... END_OF_DOCUMENT_TOKEN_TO_BE_REPLACED
Author:
Hannah El-Hitami
Date:
Mail:
Send via mail

END_OF_DOCUMENT_TOKEN_TO_BE_REPLACED
Social media
and networks
Subscribe to our
newsletter