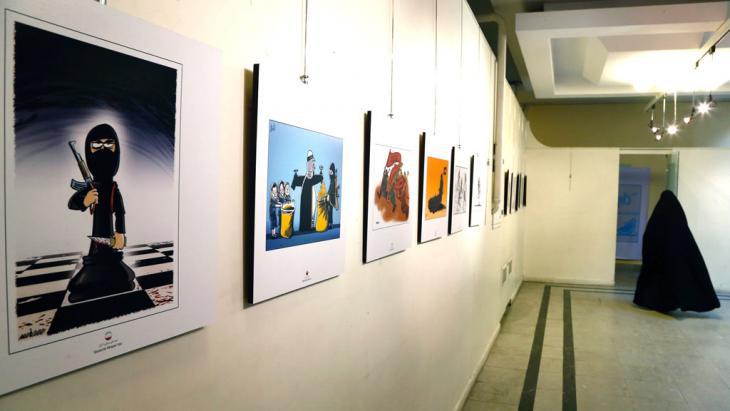 Iran has embraced an unlikely medium in its psychological battle against Islamic State: the cartoon. However, despite this focus on its newest foe, Israel and the US are obviously still viewed as the Islamic Republic's arch-enemies

Blood is dripping from the werewolf's pointed teeth. Thanks to his black turban and long beard, he is easily recognisable as a jihadist. The leash holding him is embellished with an Israeli and an American flag. This is IS portrayed as a bloodhound driven by the two traditional arch-enemies of the Islamic Republic of Iran.

The picture is part of a cartoon exhibition at the Arasbaran Cultural Center in Tehran, showing a total of 270 drawings that focus on IS. They provide visitors with the Iranian interpretation of the crimes committed in Syria and Iraq in the name of the self-proclaimed "Islamic State". The exhibition follows Iran's announcement of an international cartoon talent competition, offering a reward for the best cartoon featuring "Daesh", as IS is known in Iran and most Arab countries.

Speaking at the opening, exhibition organiser Masoud Shodjaei said that it is not only the job of the politicians to highlight the atrocities committed by IS, but also of Muslim artists in particular.

However, Iranian cartoonist Mana Neyestani opted not to participate in the contest. Now living in Paris, he felt compelled to leave his homeland following the disputed presidential election of 2009. Since then, he has been observing developments in Iran from the perspective of an exile. 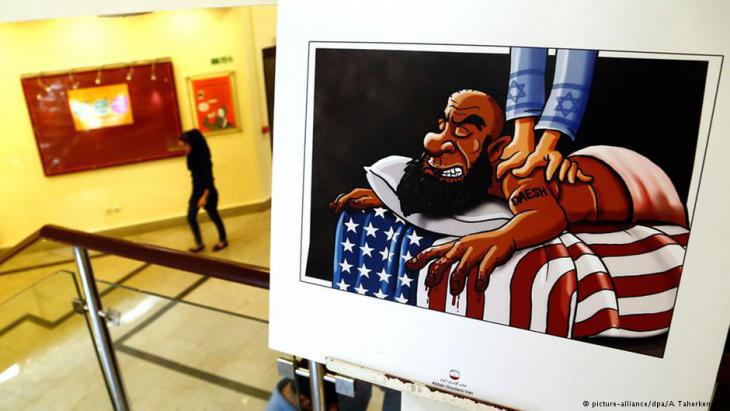 According to Iranian cartoonist Mana Neyestani, who lives in exile in Paris, the exhibition seeks to reinforce a traditional propaganda polemic of the Iranian government: "I assume the objective is to establish a connection between Israel and the United States and IS terrorism," he says

He has looked at the drawings currently presented in Tehran on the Internet and agrees it is right to make fun of IS by means of caricatures. However, Neyestani, who was awarded by "Cartoonists Rights Network International" in 2010, believes the exhibition clearly aims to reinforce the Iranian government's traditional propaganda polemic: "I assume the objective is to establish a connection between Israel and the United States and IS terrorism," he says.

What is perhaps most striking about the artworks featured in the exhibition is that, in many of the cartoons, the Star of David or the American Stars and Stripes are conspicuously placed alongside IS symbols or the inscription "Daesh". In this way, the exhibition follows the tradition of the anti-Semitic "Holocaust Cartoons Competition" which the country first ran in 2006, and which was sharply condemned by former UN Secretary-General Kofi Annan, Reporters Without Borders and the Anti-Defamation League. Masoud Shodjaei was also responsible for that competition.

Merkel and Obama as villains

Interestingly, some cartoons in this year's competition leave out IS altogether. Among them is an artist carrying the mysterious pseudonym of Ridha h Ridha, who claims to hail from Germany. Instead of directly poking fun at IS, he shows leaders like Angela Merkel, Francois Hollande or Barack Obama alongside Saudi King Salman ibn Abd al-Aziz. They all feature long, Pinocchio-like noses.

The majority of the illustrators participating in the exhibition are Iranians, with some coming from Indonesia and Turkey. None of the entrants are particularly well known artists – neither in Iran, nor abroad.

The exhibition organisers emphasise that, in the cartoons, the jihadists have been represented as locusts ravaging the Islamic world or as black sheep in the midst of a herd of white sheep, symbolising the peaceful majority of Muslims. A student who visited the exhibition told the German news agency dpa that "these brutal killers" were responsible for the fact that every Muslim in the entire world has come under general suspicion. The official message is clear: IS has nothing to do with true Islam. 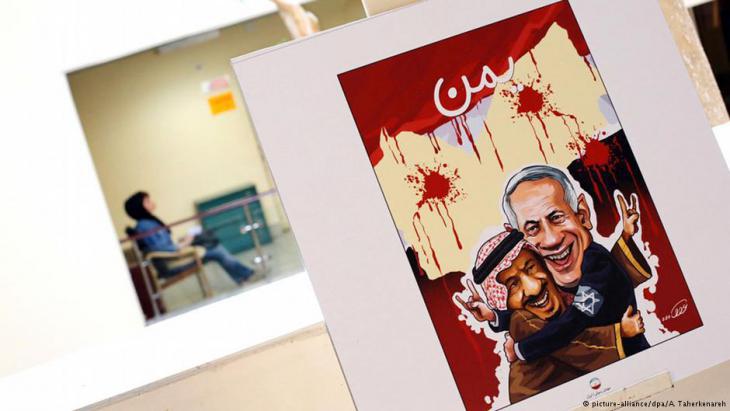 In this cartoon, the leaders of two of Iran's arch-enemies, Saudi Arabia and Israel, are seen embracing joyfully in front of a map of Yemen peppered by bullet holes

The era of dialogue

"The era of violence and radical reactions is over, we have now entered the era of dialogue and logic," President Hassan Rouhani said. Iran was trying to present Islam to the world as a peaceful religion, he said, but these efforts were hampered by IS besmirching the global image of Islam.

The fact that Iran is ridiculing IS is hardly surprising. The Sunni "Islamic State" has long been the arch-enemy of the Shia Islamic Republic of Iran. In Syria and Iraq, IS is not only threatening World Heritage sites such as Palmyra, but also Shia shrines. Syrian President Bashar al-Assad has long been Iran's ally, whom the government in Tehran is trying to support as long as possible. This includes, in addition to military support, beating the drum of propaganda against IS.

Speaking in Tehran, curator Masoud Shodjaei said that he would like to bring the anti-IS cartoon exhibition to Arab and European countries next. The Iranian Foreign Ministry, however, has advised him against such plans due to the risk of terrorist attacks.

Presumably, that is not the only reason behind the official reluctance. The deadline for reaching a final agreement on the Iranian nuclear programme with the United States runs out at the end of June. And the cartoons on show at the exhibition in Tehran are anything but diplomatic.

Short movies nominated for an Oscar often don't get wide public attention. But when one is about an Iranian girl seeking freedom from male domination by taking off her veil, ... END_OF_DOCUMENT_TOKEN_TO_BE_REPLACED

World-famous Iranian film director Jafar Panahi has been incarcerated for several months, even though Iran's Supreme Court overturned the verdict against him. Now, he has gone on ... END_OF_DOCUMENT_TOKEN_TO_BE_REPLACED

Young women are driving forward the protests against the Iranian regime, which have been going on for months. Literature provides clues as to why that should be, and why the ... END_OF_DOCUMENT_TOKEN_TO_BE_REPLACED

Visiting the country of her parents, murdered by the Iranian regime in 1998, German-Iranian artist Parastou Forouhar finds a changed society: hopeful, strong and courageous, ... END_OF_DOCUMENT_TOKEN_TO_BE_REPLACED

Ballet performances are prohibited in Iran. In her film "1001 Nights Apart", director Sarvnaz Alambeigi documents the history of dance in the Islamic Republic. By Fahimeh Farsaie END_OF_DOCUMENT_TOKEN_TO_BE_REPLACED

END_OF_DOCUMENT_TOKEN_TO_BE_REPLACED
Social media
and networks
Subscribe to our
newsletter