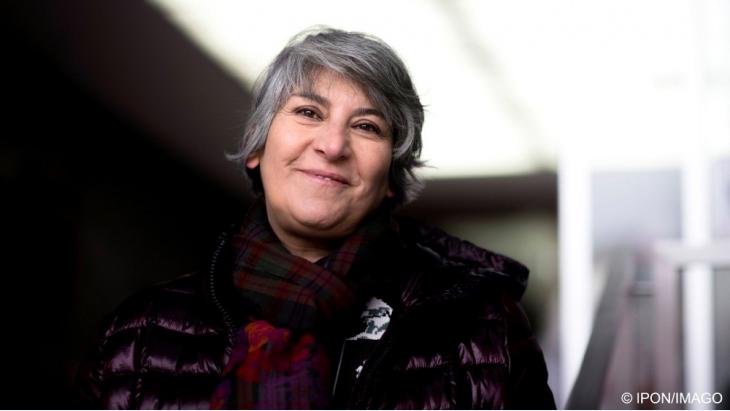 Visiting the country of her parents, murdered by the Iranian regime in 1998, German-Iranian artist Parastou Forouhar finds a changed society: hopeful, strong and courageous, despite all the repression

"Exiles are the true ambassadors of their countries": thus said Sven Tetzlaff last September in his speech on the Day of Exile at the German National Library in Frankfurt am Main. His remark touched me. I took it with me on my last trip to Iran and made it my mission. The following report is based on this statement and my reflections on it.

12 November 2022 saw me travelling to Tehran to commemorate my parents Parvaneh and Dariush Forouhar, well-known opposition politicians murdered in 1998 by agents of the Islamic Republic's secret service, one of a number of political assassinations of dissidents. To mark the anniversary of their deaths on 22 November, I wanted to try – as I do every year – to hold a memorial service at their home and call for an investigation into the political killings in Iran.

The occasion coincided with a changed socio-political situation. On the one hand, there was the ongoing revolutionary uprising that continues to this day, with those involved standing up for equality and democracy with vehemence and steadfastness. More courageously and resolutely than ever, they are demanding the overthrow of the regime. On the other hand, the level of repression has intensified exponentially. Thousands have already been arrested and hundreds brutally killed.

Making the decision to embark on this journey was not easy. I was worried for myself and my loved ones who share in my fate. It is impossible to describe how afraid you can be of your own country, the country where you were born and to which you are inextricably linked. It is important, dear reader, to understand this fear, shared by all people on the run as well as those in exile, as a message. 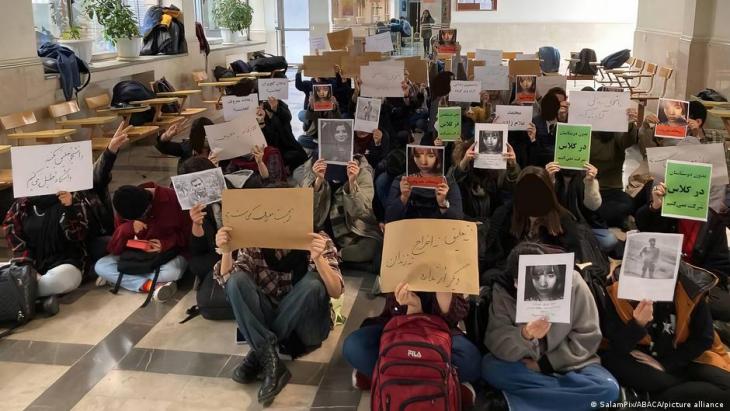 Sit-in strike at Tehran Polytechnic University. "Tehran appears to be in a hybrid state in which everyday life and revolution have entered into surprising synchronicity, dancing together, forming a shrill symbiosis that is creating new processes and rituals," writes German-Iranian artist Parastou Forouhar in her travelogue. "This includes shouting slogans of the uprising from the windows and across the rooftops of the city every night at 9 pm. This nightly chorus reinforces the cohesion and confidence of those involved"

Your first contact with the state is always at passport control. This time, a young officer in civilian clothes had positioned himself a few paces away and was observing me discreetly. As soon as I passed the checkpoint, he called me over. First I had to hand him my passport, then follow him to baggage reclaim. Afterwards, I accompanied him with my suitcase to a room I already knew, where short interrogations were conducted and written summonses for further sessions handed out.

There, another officer was sitting behind a desk, also young and dressed in civilian clothes. They both informed me that my luggage needed to be searched – orders from above. They were meticulous. The atmosphere in the room was one of bustling bureaucracy. Slowly, a pile of my unpacked personal belongings, carefully sorted, grew on the desk. They consisted of paper, all labelled: a book, the last novel by Elif Shafak in German.

A tattered old address book in which I had written down the telephone numbers of relatives and friends of my parents years ago. And finally, a small stack of business cards from the tradesmen I was supposed to contact about upcoming repairs in my parents' house. When I complained that there was nothing wrong with contacting my parents' old relatives, I was allowed to copy the relevant numbers from the address book before it was confiscated. Looking through the pages, it saddened me to discover how many of the people listed there had died in recent years.

It was simply absurd. A senseless order carried out to the letter to demonstrate authority. None of the confiscated items were of political relevance. The comedy of the situation amused me and annoyed the young officers at the same time. Finally, I was issued with a receipt for the confiscated items.

I left the interrogation room relieved: my passport had not been confiscated, something I had been counting on.

In the arrivals hall, my gaze swept over the heads of those assembled to greet other passengers. Here and there I caught sight of the hair of unveiled women. There they were, those first signs of the much-cited change that now I was seeing with my own eyes. How wonderful that this change was manifesting itself in women's hair!

The drive to my parents' house passed through the south of Tehran. On the way, too, I spotted traces of change: walls sprayed with slogans against the regime and torn propaganda banners. In one underpass, I read the slogan "Down with dictatorship, death to Khamenei". The fear that had been creeping over me in the last few weeks gave way to a feeling of inner satisfaction as I contemplated these images.

When I travel to Tehran, I usually spend the first few days there walking around the city: I wander through the neighbourhoods where I grew up. Here, too, the change was unmistakable. A young salesman in a mobile phone shop criticised the restricted Internet access, ordered by the state since the beginning of the uprising.

In the same breath, he pronounced loudly and unashamedly that the mullahs could go to hell. One taxi driver described his job as fighting a losing battle with inflation on a daily basis. He compared the regime to a cancerous growth that needed excising: then "we" would finally be better off. A young street vendor of hijabs was now advertising them as ordinary scarves.

Short movies nominated for an Oscar often don't get wide public attention. But when one is about an Iranian girl seeking freedom from male domination by taking off her veil, ... END_OF_DOCUMENT_TOKEN_TO_BE_REPLACED

World-famous Iranian film director Jafar Panahi has been incarcerated for several months, even though Iran's Supreme Court overturned the verdict against him. Now, he has gone on ... END_OF_DOCUMENT_TOKEN_TO_BE_REPLACED

Young women are driving forward the protests against the Iranian regime, which have been going on for months. Literature provides clues as to why that should be, and why the ... END_OF_DOCUMENT_TOKEN_TO_BE_REPLACED

Ballet performances are prohibited in Iran. In her film "1001 Nights Apart", director Sarvnaz Alambeigi documents the history of dance in the Islamic Republic. By Fahimeh Farsaie END_OF_DOCUMENT_TOKEN_TO_BE_REPLACED

Iran's president Ebrahim Raisi is overseeing an unyielding crackdown. The current situation grimly echoes his role in a purge of political prisoners in 1988 END_OF_DOCUMENT_TOKEN_TO_BE_REPLACED

END_OF_DOCUMENT_TOKEN_TO_BE_REPLACED
Social media
and networks
Subscribe to our
newsletter