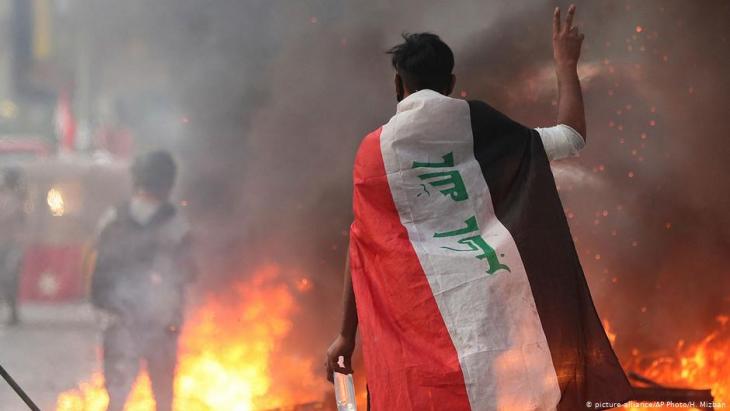 Of all the protests currently in progress around the world, those in Iraq have been the most deadly. But just who exactly is firing on the demonstrators? The question is difficult to answer – and constitutes political dynamite. Birgit Svensson reports from Baghdad

The air is bad in Baghdad. In both senses. On the one hand, new winter fog is pushing deep down into the lower strata of the atmosphere and mingling with the smog made up of tear gas and burning car tyres. And on the other, the bitter battles of recent days that left so many people dead and injured have stirred up the city at the same time as paralysing it.

Young demonstrators with thick bandages limp along Tahrir Square. You no longer hear any shots being fired, but the ambulance sirens are all the more audible. The mood is somewhere between resignation and "now more than ever". For fear of being caught in the crossfire, it's primarily families and women who are currently staying at home.

And that is probably the aim of the violent operation ordered by the government. It wants to put an end to the uprising. For the second time since the start of protests in Iraq six weeks ago, Prime Minister Adel Abdul Mahdi is allowing demonstrators to be fired upon. This much we know: of all the protests and rebellions currently going on in the world, the ones in Iraq are the bloodiest.

Who is firing the shots?

As the municipal rubbish trucks remove the rubble and excavator shovels pick up the paving stones used by demonstrators as projectiles, there is still no foreseeable end to the political heap of rubble that provoked these protests and that was also brought to light by the rallies. Whoever authorised the use of live ammunition at the protests as well as tear gas, thereby bearing the responsibility for the deaths of largely peaceful demonstrators, is beyond dispute. The UN's Human Rights Commission now says 330 people have been killed since the start of protests in early October and around 18,000 injured. What is however unclear, is exactly who fired the shots. 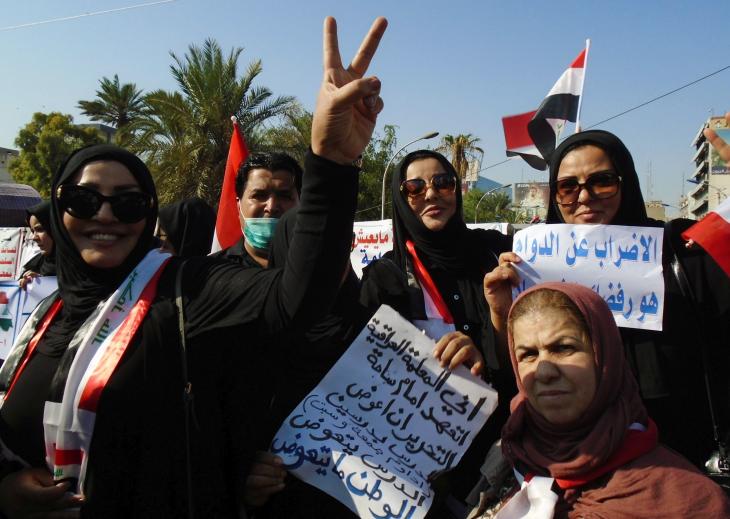 Fed up with years of mismanagement, corruption and abuse of political power: Iraqis have been protesting against the central government under Adel Abdul Mahdi since the beginning of October – as seen here on Tahrir Square in Baghdad. It is an uprising that has to date cost 330 people their lives

Dheyaa al-Saadi receives visitors in his office at the Iraqi bar association on the other side of the Tigris, opposite Tahrir Square. The government quarter is located in Karkh, which is the western half of the city. Many ministries are situated here, including the office of the Prime Minister. The demonstrators on Tahrir Square were fired on from Karkh.

The chairman of the Iraqi Bar Association is used to people arriving at his office late if they're coming from the other side of the Tigris. Of the four Tigris bridges still occupied a week ago by the protest movement, three have now been cleared by security forces but not yet opened for traffic. To travel from Rusafa to Karkh, you need to make a major detour and that takes time.

The Middle East is plagued by electronic armies working at the behest of one regime or another. Long used by those in power as a weapon in the fight against activists and ... END_OF_DOCUMENT_TOKEN_TO_BE_REPLACED

On Friday, Iranians head to the polls to elect a new president. What's at stake in this presidential election? Sanam Shantyaei explains. END_OF_DOCUMENT_TOKEN_TO_BE_REPLACED

For centuries, the great classical Persian author Hafez has inspired German writers. Translations, adaptions and homages have been created in his wake, and the process continues ... END_OF_DOCUMENT_TOKEN_TO_BE_REPLACED

In the run up to Iran’s presidential election, Supreme Leader Ayatollah Ali Khamenei has sought to entrench his power. Alex Vatanka asks whether a sharp slump in voter turnout ... END_OF_DOCUMENT_TOKEN_TO_BE_REPLACED

Turkey's parliamentary and presidential elections are scheduled for June 2023. But they are already casting a shadow. While the opposition is calling for early elections, ... END_OF_DOCUMENT_TOKEN_TO_BE_REPLACED
Author:
Birgit Svensson
Date:
Mail:
Send via mail

END_OF_DOCUMENT_TOKEN_TO_BE_REPLACED
Social media
and networks
Subscribe to our
newsletter