The Faculty of Islamic Studies in Sarajevo is the most important institute of Islamic higher education, research and teaching in Europe. It is the living proof that Islam has its place in the modern academic world. Stefan Schreiner reports 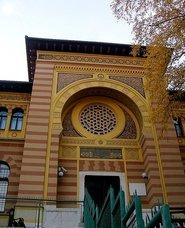 A centre of Islamic research and teaching in Bosnia-Herzegovina: the Faculty of Islamic Studies in Sarajevo

​​From the late sixteenth century onwards, Sarajevo began making a name for itself in the Islamic world as a city of Islamic education and science – a reputation it still enjoys today.

This reputation was no coincidence. At certain periods in its history, Sarajevo was home to twelve of Bosnia's 70 "Medresses" or Islamic theological departments. These "Medresses" helped spread the city's fame as a centre of education and science. Today, the existence of the Faculty of Islamic Studies ensures that Sarajevo is still an important name on the world map of Islamic academia.

The Faculty of Islamic Studies in Sarajevo is not only the oldest institute of its kind in Europe, it is also the continent's most important seat of Islamic higher education, training, research and teaching.

Although it was only established in its present form as the Islamic Theological Faculty in 1977 by the Islamic community in Bosnia and Herzegovina, its history goes back much, much further than that, reaching back to the second half of the fifteenth century and to the earlier period of Ottoman rule in Bosnia.

The Habsburgs in Bosnia and the Balkans

Despite the fact that Sarajevo has been a centre of Islamic education and science since the sixteenth century, the predecessor institute to the Islamic Theological Faculty was the result of radical changes in the political and religious landscape of Bosnia in the late nineteenth century.

These radical changes were in turn borne of the Austro-Hungarian seizure of power in the region. The Islamic Theological Faculty emerged out of the Islamic School for Theology and Sharia Law (Viša islamska šerijatskoteološka škola), which was established under the Austro-Hungarian administration and was housed in the pseudo Moorish palace at the edge of the old quarter of Sarajevo where the modern-day faculty is now situated.

Paragraph 25 of the Treaty of Berlin, which was signed by Great Britain, Germany, Austria, France, Italy, Russia, and Turkey at the Congress of Berlin from 13 June to 13 July 1878 and regulated the new political and legal order in the Balkans following the Russo-Turkish War of 1877, allowed the Habsburg monarchy to occupy Bosnia, effectively submitting the country to Austro-Hungarian rule.

One of the most radical measures that the new regime introduced as part of its policy of modernisation and, consequently, one of the challenges faced by the Bosnian Muslims who now lived under non-Muslim rule, was the restructuring of their education and school system.

A new college for Sharia judges

The Austro-Hungarian administration not only assumed control of the traditional Islamic elementary "Mektebs" and higher "Medresses" and the secular Ottoman schools ("rushdiyyes"), it also introduced new schools and school forms, namely those that combined elements of both the European and the Islamic educational systems. 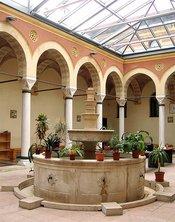 ​​The most important and lasting of these reforms was undoubtedly the establishment of the so-called "mekteb-i nuwwab", the college for Sharia judges.

Opened in 1887, this college was tasked with training judges ("kadis") and other Islamic civil servants who were responsible for the regulation of matters relating to those members of the Muslim community that had remained in Bosnia and now lived under the rule of the Catholic minority.

The intention was that Islamic judges and civil servants of the kind that both the Austro-Hungarian administration and the leadership of the Bosnian Muslims at the time wanted and had in mind would receive instruction in both traditional Sharia law and European (Austro-Hungarian) law.

The merger of two educational models

The establishment of the new faculty created a model Islamic faculty that complied with European standards and structures – a model that sought to combine traditional Islamic and modern European education and science at an academic level and indeed succeeded in doing so. It also produced graduates that were both Islamic scholars and European intellectuals in one.

It was these very graduates who in the years and decades that followed shaped the face of Bosnian Islam as a European Islam and continue to do so to this day.

The basic decisions taken by Muslim scholars and above all the Islamic community in Bosnia and its representatives when establishing the Islamic School for Theology and Sharia Law proved their value many times over in the years that followed, both after the period of Austro-Hungarian rule during the Yugoslavian monarchy and under Communist rule.

A unique institute in Europe

The collapse of the former Yugoslavia and the establishment of the independent state of Bosnia-Herzegovina brought further changes: with the University Act of 1991, the Ministry of Education, Science, and Culture of Bosnia-Herzegovina recognised the Islamic Theological Faculty as a university faculty. Since 29 September 2004, the renamed Faculty of Islamic Studies has legally and formally been part of the state University of Sarajevo. 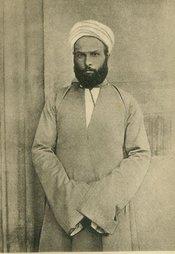 Muhammad 'Abduh: in the 19th century Egypt's Mufti recommended the faculty in Sarajevo to the Egyptian authorities as a model of a new, reform-oriented seat of Islamic education

​​This means that the Faculty for Islamic Studies in Sarajevo is the only Islamic theological faculty in Europe to both belong to a state university and to exercise its duties in close co-operation with the Islamic religious community.

In accordance with the requirements of the Islamic community in Bosnia-Herzegovina, these changes were accompanied by the rearrangement of the degree courses and an extension of the subjects taught at the faculty.

The objective of this reform was to create courses that accommodated Islamic tradition and also took account of the political hope that students would be able to study Islamic theology in a European context.

The faculty now not only offers a conventional curriculum in Islamic theology, but also, since the academic year 1992/93 a course in religious education that sought to train men and women who would be capable of teaching classes in Islam at state schools.

Political will also led to the introduction of classes in democracy and human rights, which are an obligatory part of the curriculum.

Recognised in Europe and the Islamic world

When selecting the lecturers, particular importance was attached not only to the usual qualities and qualifications, but also to the fact that successful candidates had both a qualification from a leading Islamic university (such as Cairo, Medina, Tehran, or Kuala Lumpur) and a degree from a European university. The purpose of this was to ensure that there was no contradiction between the Islamic theological qualification and European academic standards.

It is of great importance to the faculty that it is not only open to European theological degree courses, but also that it is highly respected in the Islamic world and that none of its lecturers are ever accused of "bid'a", impermissible innovation or even heresy.

On the contrary, just as Muhammad 'Abduh once recommended the faculty in Sarajevo to the Egyptian authorities as a model of a new, reform-oriented seat of Islamic education, the faculty enjoys to this day excellent relations with the major universities of the Islamic world. It not only attracts students from Bosnia-Herzegovina and its neighbouring countries, but also from all over the world.

Just as the Bosnian Muslims see themselves as "Europe's bridge to the Islamic world" in the tradition of the great Islamic reformers, the Faculty of Islamic Studies sees itself as a mediator between the cultures of knowledge in Europe and the Islamic world.

Food for thought for Europe

It is all the more regrettable, therefore, that the Faculty of Islamic Studies has received so little attention and recognition in the "West", quite apart from the fact that most of its lecturers are largely unknown and their works are not made available to the general public.

This situation should be changed as quickly as possible, most particularly in the context of the debate in Germany about the establishment of Islamic theological degree courses and the possible foundation of appropriate university faculties. Even if the pattern of the Faculty of Islamic Studies in Sarajevo is not copied to the letter, it could at least provide essential impetus and food for thought for this debate.

At the very least, it deserves to be more acknowledged and recognised. After all, it is the proof that Islamic theology can be studied at the same European university level as Christian theologies.

Prof. Dr. Stefan Schreiner is professor of Jewish Studies and Religious Studies (main focus: Islam) and head of the Institutum Judaicum at the Eberhard Karls University in Tübingen, Germany.

Islam in Bosnia and Herzegovina
"I Am a Muslim - Don't Panic!"
Ten years after the end of the war, young Muslims in Bosnia and Herzegovina have found the courage to try and make things happen. But the West is squandering a great opportunity to see Bosnian-style Islam as both a bridge between East and West and a model for Europe. Tobias Asmuth reports from Sarajevo

Comments for this article: Seat of Knowledge and Mediator between the Cultures

السلام عليكم
I am a revert from UK could you please let me know if I could come an study in Sarajevo.
I am 43 years old and would really think this Madrassa would be beneficial.
Allah Kareem.

END_OF_DOCUMENT_TOKEN_TO_BE_REPLACED
Social media
and networks
Subscribe to our
newsletter