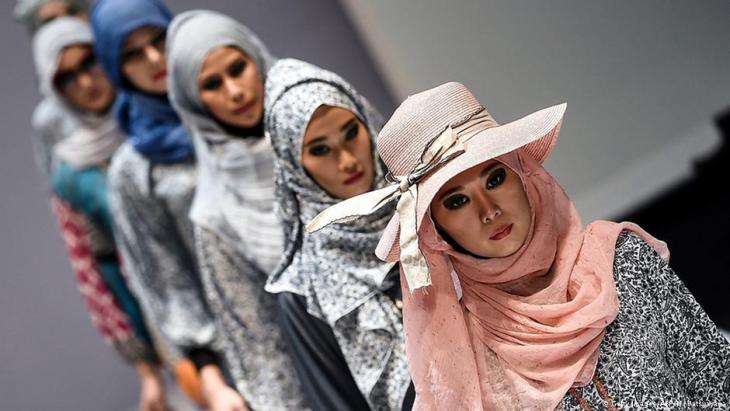 The years-old debate about designing fashion for Muslim women who follow strict dress codes has re-ignited in France, raising the question of just what role, if any, European design houses have in a political debate. By Courtney Tenz

Italian designers Dolce & Gabbana are no strangers to controversy: nearly every collection they showcase on the runways of Milan leaves tongues wagging. Last year, the talk was about the runway presentation, as models in various states of dishevellment carried children with them on the catwalk. In years past, the gossip centred on the hyper-sexualisation of models dressed in their barely-there garments.

A new collection released in January 2016 via Style.com in Arabia, however, has sparked a raging debate in France that has yet to abate. The controversy centres around their first-ever collection of hijabs and abayas – the head scarf and free-flowing ankle-reaching garments worn by more conservative Muslim women.

Along with Dolce & Gabbana, a growing number of Western brands, such as H&M and Uniqlo, are creating and marketing collections for Muslim women, especially those living in the Middle East.

Commenting on this profitable market, the French minister for women's rights Laurence Rossignol denounced it as "irresponsible" in a recent interview. Now the whole country is debating the role fashion plays in shaping opinion.

As the "New York Times'" fashion critic Vanessa Friedman wrote, the discussion centres on the question: "Is it fashion's responsibility to ease acceptance of different identities; to foster tolerance and understanding – or to promote a specific aesthetic expression of liberty?" 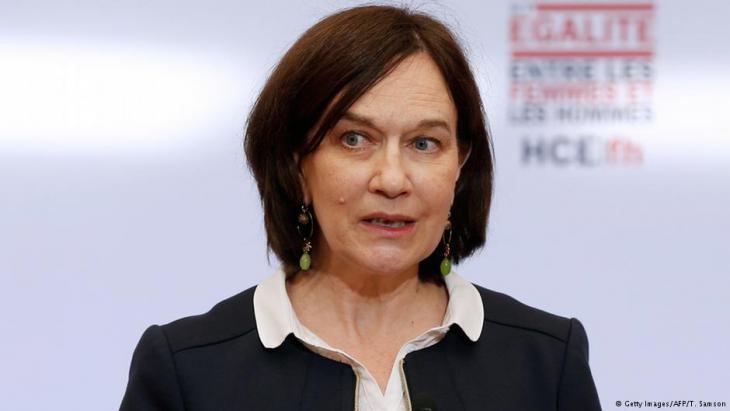 Outspoken criticism: in an TV interview, the Socialist politician Laurence Rossignol recently condemned fashion companies that sell burkinis (a combination of burka and bikini) as ″irresponsible″. As the presenter questioned her about women who opt to wear a hijab, the minister retorted: ″No doubt some niggers were also in favour of slavery″

France′s minister for women's rights declared in an interview on BFMTV, the country′s most popular news network, that "social control over women's bodies" was at stake: "When brands invest in this Islamic garment market, they are shirking their responsibilities and are promoting women's bodies being locked up," she said.

Following Rossignol's remarks, philosopher Elisabeth Badinter, one of France's most prominent feminist voices, even called for a boycott of these brands.

The comments come on the back of a number of controversial laws that have been passed in France restricting the apparel worn in public by conservative Muslim women.

In 2011, a law prohibiting face-coverings came into effect, essentially limiting the use of the niqab and burka, two garments worn by some Muslim women that almost completely cover their face. In 2014, a decade-old law prohibiting the wearing in public schools of "conspicuous religious symbols," including the hijab, the head scarf worn by some Muslim women, was upheld by the European Court of Human Rights. 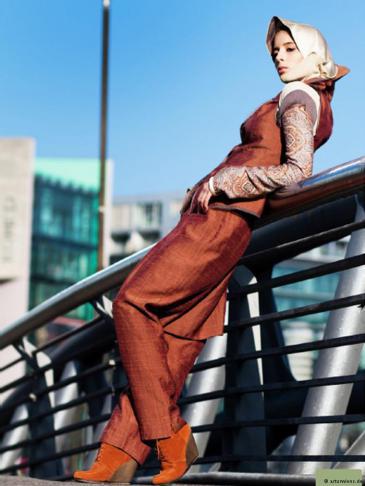 In France emotions run high when it comes to Muslim women and their choice of clothing. Yet the vehemence of the recent furore about Islamic fashion – targeting Muslimas in particular – has left many speechless

At the same time that these laws were being put into place, big name fashion brands from Europe and North America began offering garments specifically marketed to appeal to more traditional Muslim women who follow stricter dress codes. DKNY, Tommy Hilfiger and Oscar de la Renta have released special Ramadan collections to markets in the Middle East. Others have created more modest versions of their standard wares, featuring lower hemlines and longer sleeves.

It's no secret in the fashion industry that the Middle East holds huge capital potential. Wealthy members of Arab high society have often been sighted on shopping sprees in London, Paris and Milan, picking up exclusive goods.

Vivienne Westwood, known for her boundary-pushing punk aesthetic, has a number of customers in the Arab world – which suggests that it's not only traditional clothing these Muslim women are after when they're shopping, but also the designer names to wear, perhaps beneath the loose-fitting abaya. But with a market that is expected to double by 2019, to nearly 443 billion euros (over $500 billion), designers need to seek out new ways to remain relevant in order to take in a share of those profits.

Whether that share should come by offering hijabs and abayas is at the heart of the debate. The UK chain Marks & Spencer was the focus of complaints early this year after a burkini they'd had on offer in the Middle East was also made available online for shoppers worldwide. High street fast fashion retailer H&M was tossed into the debate after an advertisement included a model wearing a hijab.

Still, the debate seems to be raging most fiercely in France, home to an estimated five million Muslims. Pierre Berge, co-founder of the luxury design house Yves Saint Laurent, told Europe 1 radio station that brands which market to Muslim women this way were exploiting a misogynist system and "contributing to the enslavement of women." 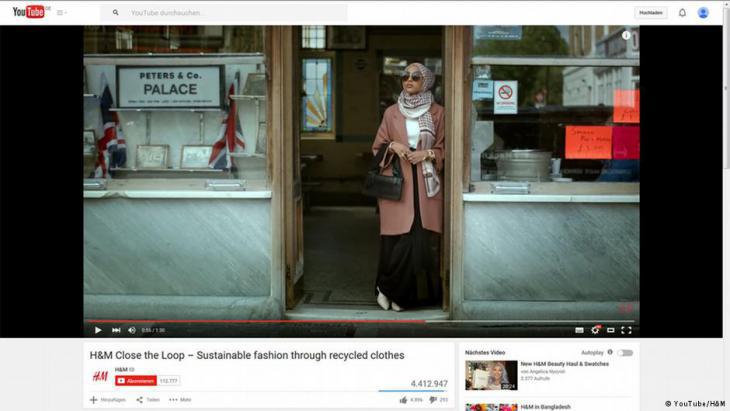 Controversy over a piece of fabric: having produced an advert featuring a hijab-wearing model, fast fashion retailer H&M has also been drawn into the debate. As ever, the situation is most tense in France, home to an estimated five million Muslims

"It's all about money"

Yet in Germany, rarely a peep has been heard in media outlets, aside from the occasional report focusing on the French debate. Gerd Muller-Thomkins, managing director of the Deutsches Mode Institut in Cologne, says that there is good reason for this. The discussion, he said, is one that most impacts luxury brands operating on an international level. Few of these design houses are based in Germany.

"In Germany, we play with ethnic fashion, yes. We experiment with multiculti patterns and shapes, but designers do this as a way to open up your mind," said Muller-Thomkins. "There may be a few women who wear head scarves here, but I see this as a fashion statement, combined with average apparel like white trousers."

"In the end, though," he said, "designers want to serve the market and to do so with clients at a high level. It's all about money."

Though that may be true, Pierre Berge had harsh words for those designers out to get a greater slice of the pie in this way. "Designers are there to make women more beautiful, to give them their freedom, not to collaborate with this dictatorship which imposes this abominable thing by which we hide women and make them live a hidden life," Berge said. "Renounce the money and have some principles."

Despite what heads of state may claim, the Russian attack on Ukraine is not a wake-up call for a self-confident Europe that defends its values. The war is accelerating the decline ... END_OF_DOCUMENT_TOKEN_TO_BE_REPLACED

At the EU's outer borders, the right of migrants to a fair asylum procedure continues to be systematically disregarded. Take Greece, for example: in the worst case scenario, those ... END_OF_DOCUMENT_TOKEN_TO_BE_REPLACED

Madrid's about-face on the Western Sahara conflict has enraged Algeria. Trade relations have been frozen unilaterally and a cut in gas supplies to Europe could be in the pipeline ... END_OF_DOCUMENT_TOKEN_TO_BE_REPLACED

Mourad al-Marouai was just nine when a landmine killed him on a beach in war-torn Yemen, a tragedy that will haunt his family forever. After a swim, the little boy "suddenly ... END_OF_DOCUMENT_TOKEN_TO_BE_REPLACED

A ceasefire has been in effect in Libya for the past year and a half. Yet after Russia's attack on Ukraine, another proxy war looms in Africa's most oil-rich country. Mirco ... END_OF_DOCUMENT_TOKEN_TO_BE_REPLACED

The Ukraine war has seen energy prices spike with oil producers in the Middle East making more money than ever. But will it put the brakes on long-planned reforms to diversify oil ... END_OF_DOCUMENT_TOKEN_TO_BE_REPLACED
Author:
Courtney Tenz
Date:
Mail:
Send via mail

END_OF_DOCUMENT_TOKEN_TO_BE_REPLACED
Social media
and networks
Subscribe to our
newsletter