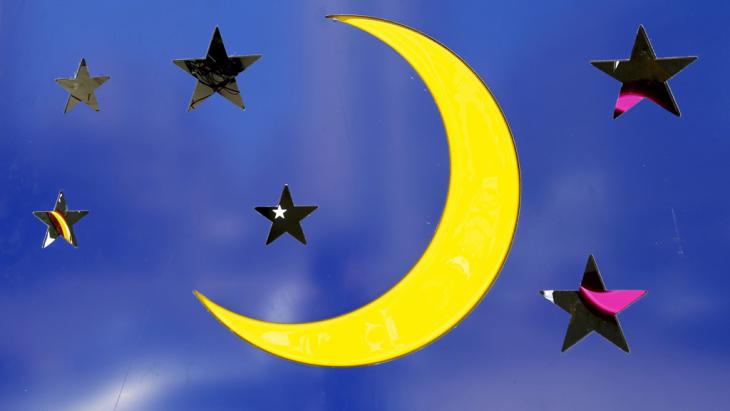 Fasting during Ramadan
Too much of a good thing

Ramadan is like Islam as a whole: from a distance, people are scared of it. But close up, it′s wonderful. If only it weren′t for an uncomprehending majority on one side, and the pious hard-core fasters on the other. By Anja Hilscher

"What?! You′re fasting? In this heat?" my friend cried out in horror. "But you surely must be allowed to drink?" "Nope, can′t do that either. Not until sunset." "Seriously? But that′s not until quarter to TEN! You can′t drink anything until then? How are you supposed to do that? What you′re saying is that it′s basically all about surviving..." "You′d better believe it!" is all I can say in annoyance through gritted teeth. You′re not allowed to quarrel during Ramadan.

"Your God surely allows you to drink, though?!" asks my friend′s doctor – a 65-year-old with grey dreadlocks. "No, we don′t drink, either!" Aisha replies patiently, with just a smile – practised over decades of dealing with stupid questions and weak arguments. There are quite a lot of people who can′t imagine the existence of humans who give a higher priority to something other than their own wellbeing.

In my view there are two problematic groups that tend to spoil Ramadan in Germany: firstly, the non-Muslims, who can sometimes be really aggressive. And secondly, the Muslims.

Just yesterday, I fell into conversation with an old woman in a headscarf at the local supermarket, to whom I had wished "Ramadan Mubarak". "I don′t have any problem fasting," she declared. "Last week I was in hospital and I still fasted. And my father in Macedonia is 86. He fasts too! It′s over 40 degrees there!" Nice old lady. But still I rolled my eyes inwardly. 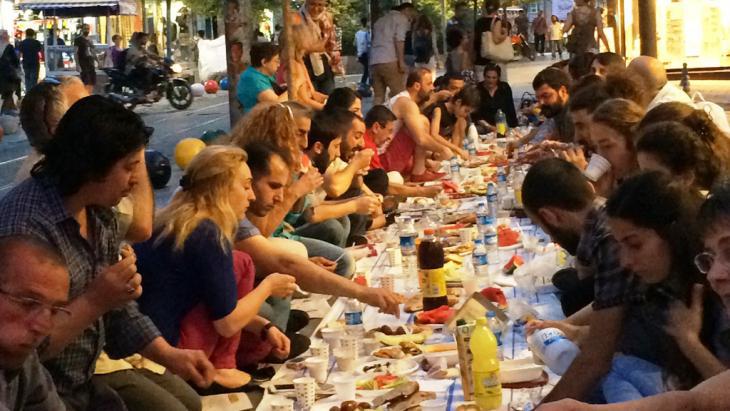 The fascination of iftar: "No one who hasn′t tried it can picture how wonderful this warm sense of community is. The moment when – with an unprecedented appetite! – you are finally allowed to eat, has a very spiritual aspect for me," writes Hilscher

Just as I had to my friend′s clever comment. The "middle way", to which Islam aspires, runs exactly halfway between the two: between the German cult of health and extreme hard-core fasting (or its opposite, namely repurposing Ramadan and turning it into a month-long party).

Even worse is the competitive do-gooding that goes on – that and finding yourself hooked up to a morality drip. It′s not just that many Muslims keep fasting in spite of headaches, circulatory problems and even chronic illnesses like high blood pressure – despite the Koran′s many exhortations to be moderate and not overtax yourself. In some cases, they are actually putting their lives at risk. But is that enough? Not by a long chalk!

According to one tradition, blaspheming, lying or making false pledges mean that your fast doesn′t count. This makes sense: the deeper meaning of Ramadan is spiritual purification and fighting your weaker self. But some Muslims take the view that you have to pray, do good deeds, or immerse yourself in the Koran voluntarily and without pause for 30 days.

And those who think that such people then celebrate, laugh and watch television in the evenings clearly don′t know any hard-core fasters (and that′s not counting the Salafists – I don′t even want to know how they do Ramadan!).

When the sun goes down, these Muslims eat a date – or maybe two...sometimes they even have some soup – and then they attend thoroughly to the evening prayers. After which, they have a proper meal (though it certainly won′t involve huge quantities of boiled and fried things), only to pray again afterwards: the isha prayer is said very slowly and contemplatively. 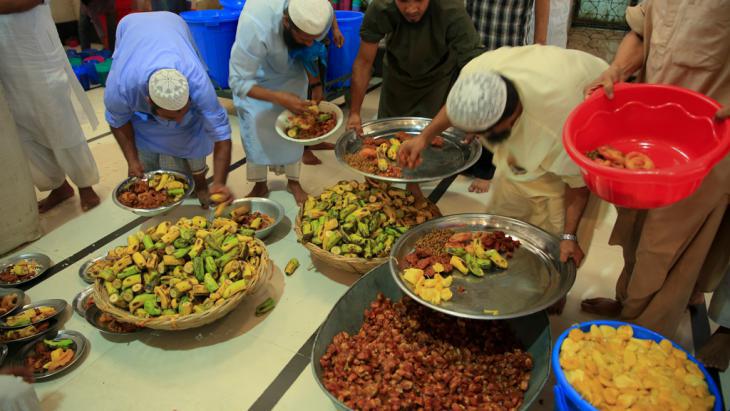 Compassionate gesture: "Ramadan has the greatest advantages for the poor. Firstly, people who are often used to having an empty stomach find the fasting easier to bear than the spoilt members of the middle and upper classes. But above all, the poor finally have an opportunity to eat until they are full in the evening," writes Hilscher

Finally, there is the extra Ramadan prayer, taravi (which we also call the "marathon prayer"). This comprises so many rakats (prayer segments), depending on the branch of Islam, that I have always stopped counting, half asleep – probably somewhere around 12. And then, if you sleep at all, it′s for two or three hours, before getting up again for more voluntary prayers and elaborate breakfast preparations, followed by breakfast, the fajr prayer and Koran recitations. And when dawn breaks, the eight hour working day calls! The joke is that while most of these things are mentioned in the Sunna, they are by no means compulsory.

While in many Islamic countries, Muslims are fun-loving and happy to take a more relaxed view of things, in Germany the current trend is towards piety. This is all well and good. And it′s also understandable from a psychological point of view. If it wasn′t for the fact that in this country, the days are incredibly long and you end up going about like a zombie among people who don′t understand. Is that the point of the thing? Hardly. The Koran, in any case, says: "Allah intends for you ease and does not intend for you hardship" (Sure 2: Aya 185).

It could all be so simple...

Ramadan is full of wisdom – when practised correctly. The deeper meaning of the Islamic month of fasting is not being ravenous all day and killing time until sunset by napping. But nor is it striving towards brutal asceticism and chronic exhaustion. Islam is, as I have said, the "middle way". Ramadan should actually be a time of inward reflection, though also one during which you still maintain social contacts and enjoy eating together.

No one who hasn′t tried it can picture how wonderful this warm sense of community is. The moment when – with an unprecedented appetite! – you are finally allowed to eat, has a very spiritual aspect for me. Which is entirely in keeping with the Islamic teaching that the "signs of God" are to be found everywhere: in day-to-day life, in nature, in sensory pleasures. 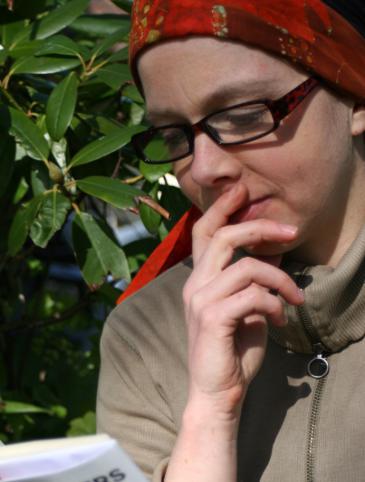 Anja Hilscher is a mother and expert in the art of living, with a sideline as a German teacher. She converted to Islam a quarter of a century ago. Her first book, "Imageproblem - das Bild vom bösen Islam und meine bunte muslimische Welt" (Image problem – the image of an evil Islam and my multi-coloured Muslim world) was published six years ago. She lives in northern Germany with her husband and children

Ramadan helps us recognise and overcome addictions – and every year Muslims alienated from Islam get a chance to become a little more religious (or at least to try it out). Particularly as this is a time when you have more contact with other Muslims, through breaking the fast or going to mosque together.

But Ramadan has the greatest advantages for the poor. Firstly, people who are often used to having an empty stomach find the fasting easier to bear than the spoilt members of the middle and upper classes. But above all, the poor finally have an opportunity to eat until they are full in the evening. As "feeding the poor" has special merit in Ramadan, food is distributed in many mosques in the evening, or rich restaurant owners simply put tables out on the pavement.

″And where′s the spiritual element?″

It is quite a challenge to fast in largely non-Muslim and generally non-religious surroundings. But then Muslims, too, can be just as annoying.

And in any case, one acquaintance told me, this is the very reason she has more of a "Ramadan feeling" in Germany than in Tunisia, where many people just spend half the day asleep, only getting up to prepare dinner and then have a hearty meal together. "And where is the spiritual element in that? That can′t be it!" she summed up. That made sense to me, though I had always dreamed of spending Ramadan in an Islamic country.

This thought hadn′t occurred to me at all, for the simple reason that I have spent all of my twenty Ramadans in Germany. Maybe not the worst option after all, when I think of it like that. As everyone knows, the grass is always greener on the other side.

Home
Print
Newsletter
More on this topic
Anja Hilscher's book "Image Problem": Addressing the problem of Islam's imageThe Islamic month of Ramadan: A test of willpowerThe holy month of Ramadan: To fast or not to fastRamadan for shopkeepers: Breaking the fast with dates and seafood
Related Topics
Islam in Germany, Islamic lifestyle, Koran | Quran, Muslim women, Muslims in the West, Ramadan, Salafis | Salafism
All Topics

In her latest novel, Catalan-Moroccan writer Najat El Hachmi tells the story of a young migrant woman struggling to balance her desire for freedom and the demands of tradition and ... END_OF_DOCUMENT_TOKEN_TO_BE_REPLACED

Benjamin Idriz, imam of the mosque in Penzberg near Munich, is one of the most prominent representatives of Islam in Germany. He sees his role as building bridges to mainstream ... END_OF_DOCUMENT_TOKEN_TO_BE_REPLACED

Turkish author and journalist Mustafa Akyol is one of the foremost pioneers of an Islam reconciled with modernity. Musa Bagrac spoke with Akyol for Qantara.de about his new book " ... END_OF_DOCUMENT_TOKEN_TO_BE_REPLACED

In view of the catastrophic supply situation in Afghanistan, UN authorities are sounding the alarm. Inflation and growing poverty are exacerbating the situation. The Taliban ... END_OF_DOCUMENT_TOKEN_TO_BE_REPLACED

For Western listeners, the sound of the sitar is perhaps the most cliched musical symbol of India. Sitar player Hindol Deb, who lives in Cologne, Germany, has just released his ... END_OF_DOCUMENT_TOKEN_TO_BE_REPLACED

People these days are seeking orientation in a rapidly changing world. In response, all religions – each unique in their customs and traditions – need to pull together, says Chief ... END_OF_DOCUMENT_TOKEN_TO_BE_REPLACED
Author:
Anja Hilscher
Date:
Mail:
Send via mail

END_OF_DOCUMENT_TOKEN_TO_BE_REPLACED
Social media
and networks
Subscribe to our
newsletter